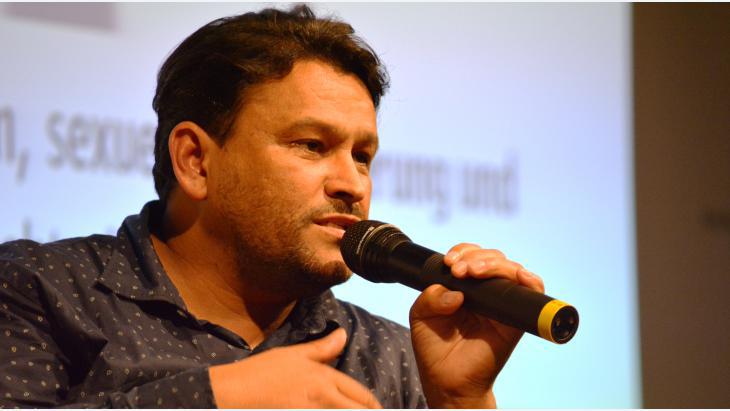 "Islam does give us leeway to think"

Muslim and gay? Most scholars consider homosexual acts unlawful – not so Muhsin Hendricks, who says that the Koran does not say that homosexuality is a sin. Jannis Hagmann spoke to the South African imam about Islam, homosexuality and Koranic interpretation

Mr Hendricks, you come from a Muslim family in South Africa. When did you realise you were gay?

Muhsin Hendricks: When I was five years old, even though I didn't know it was called "gay". But my mannerisms were very effeminate. When I reached puberty, my first attraction was to a boy in my class. At that point, I knew I was in trouble. My grandfather was an imam too and used to preach about those people that will go to hell. So I thought: am I bad? Am I one of those? That's what forced me to find out why this merciful and compassionate God would not accept me.

You went to Pakistan to study Islam at the University of Karachi. Were you already convinced that there is no contradiction between being gay and being Muslim?

Hendricks: Deep down inside I knew that it was not God but my community that rejected me, because I didn't choose to be gay.

Why did you still get married to a woman?

Hendricks: Social pressure. At least I wanted to try to be with a woman. Perhaps that would cure me, I thought. There was a woman who was madly in love with me. I told her that I'm gay and that I'm trying to change. She was happy to get married just to find out later that it didn't work. She wasn't fulfilled and I was living a double life.

You are the leader of The Inner Circle, an organisation that provides support for homosexual Muslims. What challenges do they face?

Hendricks: Many are afraid of losing their families, of being ostracised and disowned by their parents. Some take to alcohol, drugs or reckless sexual behaviour. Others even leave the faith or commit suicide. Is that what God wants? The Koran was revealed as a healing and a mercy to all of mankind. What about the 10 to 15 per cent that does not see the interpretation of the Koran as healing and a mercy? Is the Koran wrong? Or are we going to dig further and look for those interpretations that bring healing and mercy to even that part of the community? 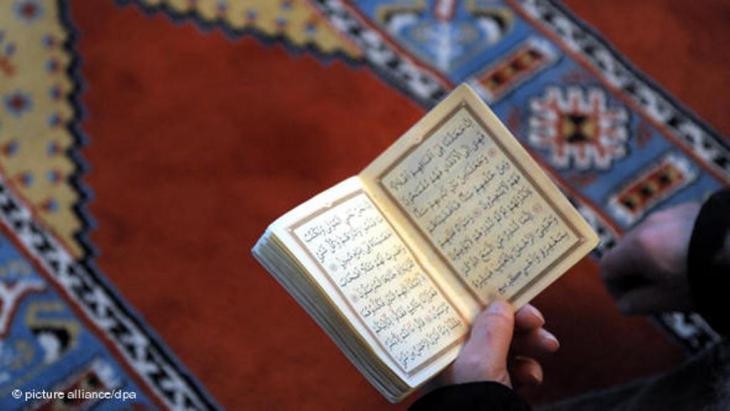 Muhsin Hendricks calls on fellow Muslims to focus directly on the Koran and Islamic sources instead of relying on traditional interpretations: "I'm using the principles of interpretation and have to use my faculties of thinking. The Koran is divine, of course, but once it is interpreted by scholars, human agency is involved"

In Arabic, some people talk about homosexuals as "loti", referring to the prophet Lot, who, according to the Koran was commanded by God to the land of Sodom and Gomorrah – as it is called in the Old Testament. Later, God punished the 'people of Lot' for their sinful behaviour, which included gay sex.

Hendricks: I take issue with the term "gay sex" because the concept of "gay" didn't exist in Sodom and Gomorrah. Only in the last two decades did people start talking about homosexuality in Islam. In the golden period of Islam between the seventh and the ninth centuries, there was a marked social acceptance of homosexuality. The poet Abu Nuwas, for example, wrote homoerotic poetry under the rule of Caliph Harun al-Rashid and his work was tolerated.

What is your take on the story of Sodom and Gomorrah?

How did you come to the interpretation that the story doesn't deal with homosexuality? Islamic scholars all over the world would contradict that.

Hendricks: When you study the Koran, one of the first things you learn is that there are asbab al-nuzul (occasions of revelation) to every verse, meaning that there is a reason why a verse was revealed. Every story has a context. In my own research, I have checked what the Old Testament says about Sodom and Gomorrah, studied the Jewish philosopher Flavius Josephus, and looked at archaeological discoveries of Sodom and Gomorrah like the Ebla tablets that were found in Syria in 1974. All of this gave me background to the story.

Where does the Koran come in to all this?

Hendricks: In the end, I went back to the Koran and matched up the two. In the Koran, you have to paste the story of Sodom and Gomorrah together because it is referred to in 76 verses spread over 9 chapters. You can't just take one verse and say: "See, God says men are not supposed to lust after men". 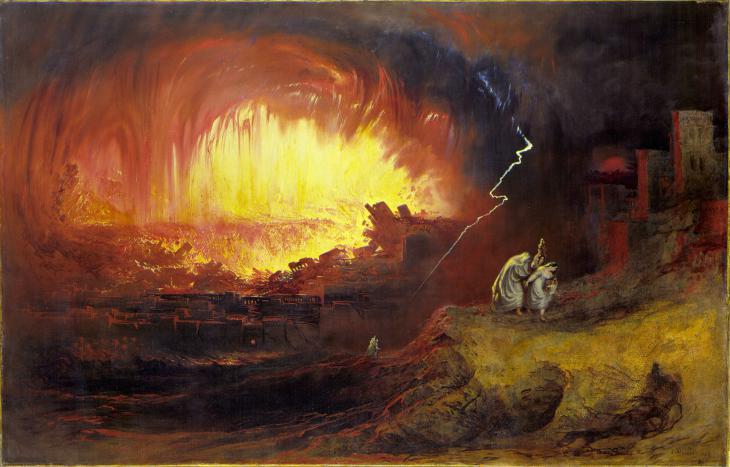 "In the Koran, you have to paste the story of Sodom and Gomorrah together because it is referred to in 76 verses spread over 9 chapters. You can't just take one verse and say: 'See, God says men are not supposed to lust after men'," says South African imam Muhsin Hendricks

Muslim scholars also base their arguments against homosexuality on the hadith, the reports about the life of the Prophet Mohammed.

Hendricks: They quote from hadith that are clearly inauthentic. A famous hadith says that two men who are guilty of the act of Lot must be killed. But leading scholars of hadith like Al-Bukhari, Al-Nasa'i, Al-Tirmidhi or Ibn Majah have clearly indicated that this hadith is inauthentic. Why are you still using it? Why do you use hadith to serve your own patriarchal needs?

If neither the story of Sodom and Gomorrah nor the life of the Prophet teaches you anything about homosexuality, what do you base your arguments on?

Hendricks: There are verses in the Koran that hint at non-binary sexual orientations. Sura 17:84 says for example:

This means that everyone acts according to his own shakila, the way that Allah has created him. People are innately the way they are and it is not for us to judge. In Sura 24:31 and 24:60, Allah mentions that amongst the servants in the house of the Prophet – peace be upon him – there were men who had no attraction to women. Further down Allah says:

This means, there are some women who sit inactive. This verse has traditionally been interpreted as referring to old women who don't get marriage proposals any more. But there are a lot of women who don't want to be married to men, for example, lesbians.

By re-interpreting Koranic verses and employing independent reasoning, you go back directly to the Islamic sources instead of relying on traditional interpretations.

Hendricks: That's the way you should engage with the Koran. Other imams often throw in a Koranic verse or a hadith and add some emotion and a little bit of blaming and shaming. I'm using the principles of interpretation and have to use my faculties of thinking. The Koran is divine, of course, but once it is interpreted by scholars, human agency is involved.

Do you face a lot of opposition?

Hendricks: The worst things I've got were hostile phone calls or e-mails. The imams who do not support my work are those who are not prepared to discuss the issue. For them, homosexuality is haram. It's wrong and that's it. But Islam does give us leeway to think. We can never change the Koran, but we can change our interpretation of it. Today, we live in a different world than over a thousand years ago. We have to look at the Koran again and see how Islam can become a mercy for a part of the community that is suffering at the moment.

Muhsin Hendricks, 47, is a South African Islamic scholar with a background in Classical Arabic and Islamic Studies obtained at the University of Karachi, Pakistan. He is the director of The Inner Circle, a human rights advocacy group that seeks to empower homosexual Muslims and help them to reconcile Islam with their sexual orientation. He serves as an imam for the Muslim LGBTI community in Cape Town. 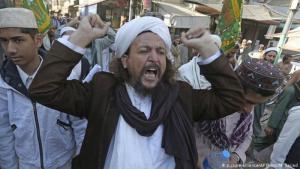 Pakistan's anti-Ahmadi laws have been in place for almost 40 years now, and the impact on this religious minority has been devastating. In a war of attrition, the laws have ground ... END_OF_DOCUMENT_TOKEN_TO_BE_REPLACED

India hits record numbers of COVID-19 infections worldwide for the sixth day running, as health systems buckle under the pressure, and shortages of medical oxygen and hospital ... END_OF_DOCUMENT_TOKEN_TO_BE_REPLACED

The USA and NATO plan to withdraw from Afghanistan by September. The operation is risky, the outcome uncertain. Many Afghans fear civil war. The quake on the Hindu Kush will also ... END_OF_DOCUMENT_TOKEN_TO_BE_REPLACED

The Prophet Muhammad never executed anyone for apostasy, nor encouraged his followers to do so. Nor is criminalising sacrilege based on Islam’s main sacred text, the Koran. In ... END_OF_DOCUMENT_TOKEN_TO_BE_REPLACED

Surging coronavirus cases in many parts of the world have overshadowed the start of this year's Muslim holy month of Ramadan, with festivities once again curtailed by contagion ... END_OF_DOCUMENT_TOKEN_TO_BE_REPLACED

As Qatar prepares to host the 2022 FIFA World Cup, the country has come under fire for its treatment of migrant workers, with some nations calling for a boycott of the contest. ... END_OF_DOCUMENT_TOKEN_TO_BE_REPLACED
Author:
Jannis Hagmann
Date:
Mail:
Send via mail

END_OF_DOCUMENT_TOKEN_TO_BE_REPLACED
Social media
and networks
Subscribe to our
newsletter