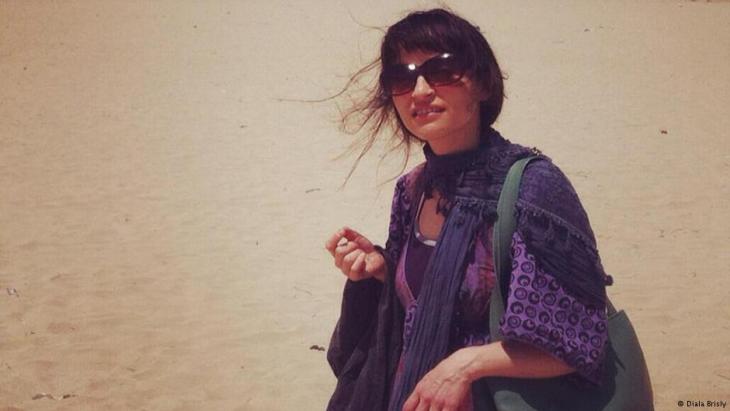 Civil war has ravaged Syria and many of its ancient cultural treasures. Syrian artist Diala Brisly, who left Syria about a year ago and now lives and works in Istanbul, says that although very few artists are still working in Syria, the country's art scene is flourishing abroad. Interview by Susanne Dickl

Presidential elections were held in Syria this week in the middle of a civil war. Isn't the outcome of the election a foregone conclusion?

Diala Brisly: Who is supposed to vote? People are dying every day; they live in destroyed houses, in camps. And then the government asks for their votes? They tell the people who live as refugees in Lebanon that they have to vote for Assad, otherwise they won't be allowed back to Syria. That's not something you say to citizens in a democracy. Besides, nothing will change; it's the same every time. These aren't real elections. It's really more like a game; it has nothing to do with reality.

Are there still artists working in Syria?

Brisly: Yes, but only a few. There is no community there. Those who voice their opinion or express it in songs or art only do so under a pseudonym. Otherwise it's too dangerous. There are a few exhibitions, but you can't compare it with how it used to be. For most people in Syria, art is simply not a priority; it's a luxury.

Only in the small town of Kafranbel, do they still have a theatre and a cultural centre. The artists there use art to send messages to people outside. Outside Syria, it's a different story: there, the Syrian art scene is even doing better than before. 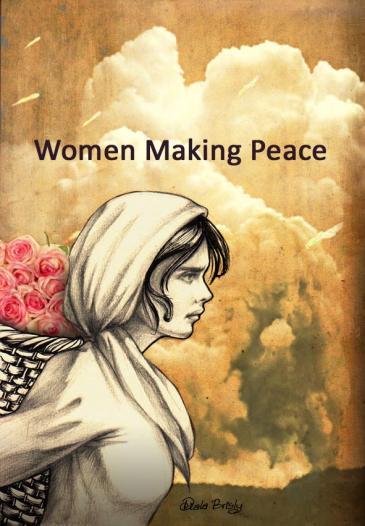 Revolution art from an artist in exile: "It's not easy to be politically active, but I think that people shouldn't give up," says Brisly

Brisly: Before the revolution, I didn't know that there were so many artists in our country. We never heard from each other and didn't have any kind of network. Now we meet up and we can work freely and make our revolution art. Before, we couldn't do anything. If you wanted to publish a magazine or a book, you had to know an official or use a pseudonym. Now we are no longer afraid to speak out.

But in Syria you also published under you own name.

Brisly: Yes. A few friends and I decided to stop using pseudonyms. Before that, I signed my works "Elvis Presley." But it was very dangerous to use my real name and I was very lucky.

How has the Syrian art scene developed in exile?

Brisly: In the past, many artists were influenced by the West; now the art is more oriental. The people are more emotional; they miss Syria. Some musicians, for example, write songs that are influenced by traditional Syrian music, but they mix it with rock – especially Pink Floyd. We love Pink Floyd! They wrote revolution songs.

In general, very little Syrian music was made in the past, but that's different now. In Lebanon in particular, in Beirut, there are many bands, concerts, festivals and lots of activities. 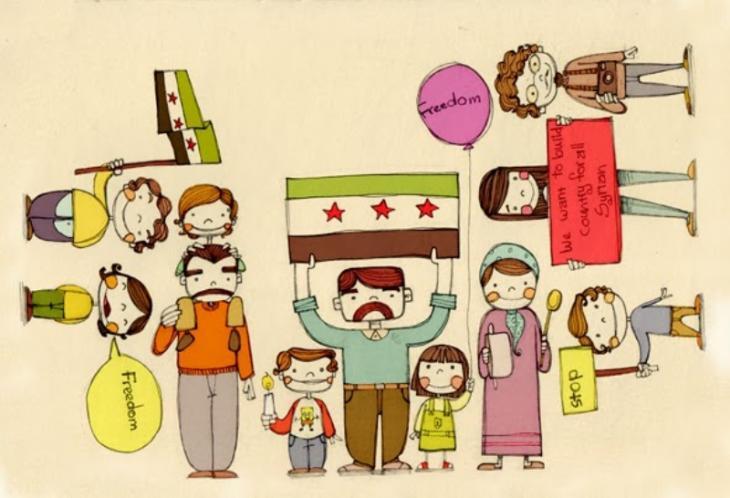 "Card for Syrian children" by Diala Brisly: "I believe in the Syrian children. They are the future of the country and they will build up Syria. That's why I work with them in the camps," says Brisly

So Syrian art is more diverse than it used to be?

Brisly: Yes, and it will be better than it used to be when everything is over. Many people have lost hope and have stopped being politically active. It's not easy to be politically active, but I think that people shouldn't give up. It will take time, maybe 10 years, but someday, the day of peace will come. I believe in the Syrian children. They are the future of the country and they will build up Syria. That's why I work with them in the camps.

What exactly do you do with the children?

Brisly: They need a good education. Many of them haven't been to school in a long time. I'm working on an illustrated book, and I think it's fun for them and helps them learn. In Beirut there will also be an art workshop for children in the camps to help them to express their feeling about their situation. I'm thinking about moving to Beirut. My friends and I are thinking about establishing a library for children there. I feel that I would be more useful there than here in Istanbul.

A lot is happening in Syria’s Sweida Governorate – foreign intervention there is unprecedented both in terms of scale and number of actors – yet Damascus remains the dominant ... END_OF_DOCUMENT_TOKEN_TO_BE_REPLACED

When she ascended the throne, millions of Muslims still lived under British rule. Later, Elizabeth II appealed for tolerance in a multi-religious society. She was the first ... END_OF_DOCUMENT_TOKEN_TO_BE_REPLACED

The documentary "The Other Side of the River" shows how women in the Kurdish regions of northern Syria fight for their rights under the most difficult conditions. By Aviva ... END_OF_DOCUMENT_TOKEN_TO_BE_REPLACED

Following months spent considering a military incursion into northern Syria, Turkey now appears to want talks with Syria to ensure security and the return of refugees. From ... END_OF_DOCUMENT_TOKEN_TO_BE_REPLACED

In this essay, renowned Lebanese journalist and writer Hazem Saghieh asks whether the Arab Levant, which stretches from Iraq in the east to Egypt in the west, will remain an ... END_OF_DOCUMENT_TOKEN_TO_BE_REPLACED
Author:
Susanne Dickl
Date:
Mail:
Send via mail

END_OF_DOCUMENT_TOKEN_TO_BE_REPLACED
Social media
and networks
Subscribe to our
newsletter