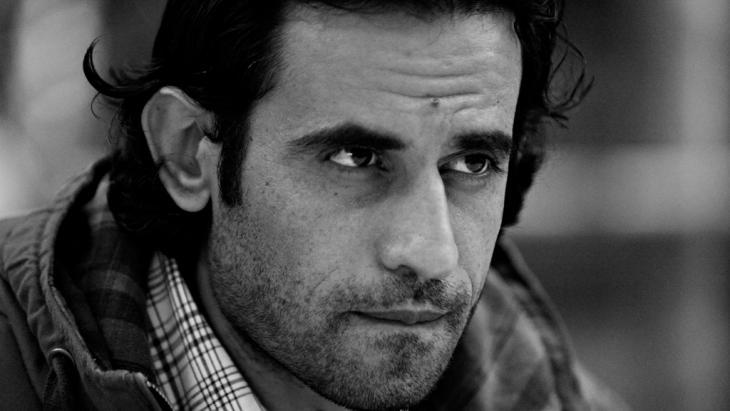 Interview with the Syrian blogger Aboud Saeed
"When the regime lost its control, I lost my fear"

Aboud Saeed started his Facebook blog on the war in Syria with the words "I am the smartest guy on Facebook". Today he has the highest number of possible friends and thousands of followers. His status updates have been published and translated into several languages. Ceyda Nurtsch spoke to the Syrian blogger

You started your Facebook blog with the words "I am the smartest guy on Facebook". What was your reason for blogging on the war in Syria?

Aboud Saeed: First, I have to say that I began my blog with these words, but these words are not to be taken seriously. They are ironic. I wanted to make fun of those people who think that they are the smartest people on the planet; these people who think that they know everything. They won't say it directly to your face, but you can tell by the way they behave that that's what they think of themselves.

I began posting things on Facebook because I wanted to speak my own words. I wanted to speak out because in real life, we are being ignored. So I began writing about my daily life, about what was going on around me, about my family, how we live. I wanted to express my thoughts and my feelings.

It was only much later that I discovered I was actually writing literary texts. But that was not on my mind when I first started. There was that free space on Facebook that asked me everyday: "What's on your mind?" I liked that there was no control, no one who told me what to do, what to write or what to think. There was just this free space. I prefer that to other forms, where you can write but either you get money or you have to pay money. In any case you are controlled and there are rules. But on the Internet, you are totally free of those things. Therefore your mind is free as well.

When I began to write, my aim was not to inform people about what was going on in Syria. After all, I am not a journalist. I just wanted to express what is inside me, all the fear, the fire, the anger, all my feelings. Letting them out this way and expressing myself made me feel good. Also the dialogue, the interaction with the people who wrote comments was very valuable to me. They often inspired me to write new things. 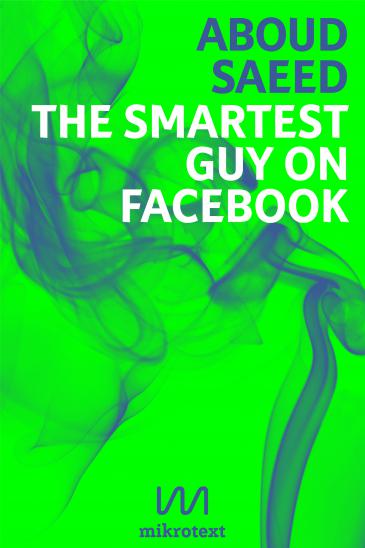 "Of course the war influenced me and my writing. Everything I wrote was affected by something that was happening around me, and sometimes I would write directly about what was going on," says Aboud Saeed

Someone wrote that you are the Charles Bukowski of Syria because your writing is very direct and full of black humour. What experiences in particular are reflected in your writing?

Saeed: I think the environment where I grew up has a great impact on my writing. I grew up in a village near Aleppo in the north of Syria that is very far from certain ideologies. Life in the countryside is very simple; it is pure and direct. This environment has often inspired me, and I think it has caused me to write directly and ironically.

Of course the war influenced me and my writing. Everything I wrote was affected by something that was happening around me, and sometimes I would write directly about what was going on. But most of the time I would concentrate not on the war itself, but on the impact it had on the people around me. So I wrote about the daily details in peoples' lives. For example, what people did to find something to eat or how our sex life was affected. All the normal, simple things of living under the war.

Social media in countries like Egypt has experienced a boom with the uprisings. Young people used it to keep each other informed and organise themselves. Has there been something similar in Syria?

Saeed: Yes, in Syria people got organised via social media too. The use of the Internet increased because of the difficulties in connecting with each other and the control of the authorities. But I always used the Internet in a different way; I was very far from these things. My purpose was not political.

Were you threatened by the authorities or was the Internet censored?

Saeed: First of all, I have to say that writing is nothing compared to what happened to other people around me. There was a killing going on, and many people were dying. Writing something and sharing it on the Internet is much easier compared to other forms of publishing like books or magazines because these can be forbidden from time to time.

The advantage of Facebook is that you can write freely, and it is much easier to write something on your wall than to publish a book. It is also simpler and more direct. Many times, the Internet was cut off, but we found other ways to go online, such as Internet via satellite. Luckily I didn't face any real threats, but there was always fear, especially in the beginning. But the village where I live was only four or five months under the control of the regime. After that, we were free and when the regime lost its control, I lost my fear.

You have very recently moved to Germany. How has your writing changed, seeing Syria from the outside?

Saeed: My writing has changed tremendously. Before, writing on my life in Syria was of crucial importance to me. But now, being so far away, writing about my experiences in Syria has somehow lost its value to me. When I was in Syria, I was writing about something that I was living day by day, what I was seeing in real. I was inside everything and I was writing about what I experienced, what I lived. Now I am outside. I'm far away and I don't have the same urge to write about Syria. I don't see myself as an Internet activist; I am a writer and I am currently working on a novel, which is not entirely about Syria.

Interview conducted by Ceyda Nurtsch
© Qantara.de 2014
Aboud Saeed was born in 1983 and grew up in a small town close to Aleppo. He worked as a welder and a blacksmith and gained popularity with his Facebook status updates on the war in Syria. His book "The smartest guy in Facebook. Status updates from Syria" was published in Germany and translated into English and Spanish. He is currently working on his first novel.

A lot is happening in Syria’s Sweida Governorate – foreign intervention there is unprecedented both in terms of scale and number of actors – yet Damascus remains the dominant ... END_OF_DOCUMENT_TOKEN_TO_BE_REPLACED

When she ascended the throne, millions of Muslims still lived under British rule. Later, Elizabeth II appealed for tolerance in a multi-religious society. She was the first ... END_OF_DOCUMENT_TOKEN_TO_BE_REPLACED

The documentary "The Other Side of the River" shows how women in the Kurdish regions of northern Syria fight for their rights under the most difficult conditions. By Aviva ... END_OF_DOCUMENT_TOKEN_TO_BE_REPLACED

Following months spent considering a military incursion into northern Syria, Turkey now appears to want talks with Syria to ensure security and the return of refugees. From ... END_OF_DOCUMENT_TOKEN_TO_BE_REPLACED

In this essay, renowned Lebanese journalist and writer Hazem Saghieh asks whether the Arab Levant, which stretches from Iraq in the east to Egypt in the west, will remain an ... END_OF_DOCUMENT_TOKEN_TO_BE_REPLACED
Author:
Ceyda Nurtsch
Date:
Mail:
Send via mail

END_OF_DOCUMENT_TOKEN_TO_BE_REPLACED
Social media
and networks
Subscribe to our
newsletter