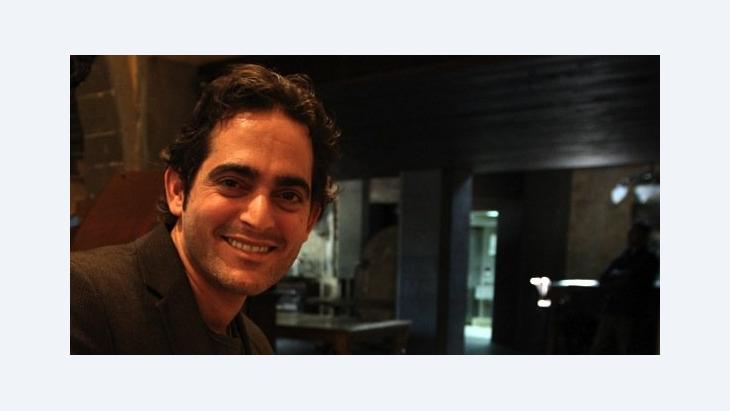 ﻿Malek Jandali is considered to be among the most versatile and creative musicians in the Arab world. He has recently attracted widespread international attention for his strong stand against the Assad regime. Martina Sabra met the artist in the country of his birth, Germany

Mr. Jandali, you said you would bring something special with you to our interview?

Malek Jandali: Yes. I have a piece of what’s known as a "shepshep" here – the front part of a small, colourful rubber slipper. This slipper belongs to a child who managed to escape from Syria to Turkey and survive in spite of heavy bombardments by the Syrian army. Some Syrian students brought it after visiting refugee camps in Turkey and gave it to me in Toronto. This rubber slipper was an item in a charity auction organized on the occasion of my concert in Offenbach, Germany. Thousands of Euros were donated by the audience. This is the most expensive shoe I ever saw. It's not Gucci, it's not Armani, it's freedom. Look at it. Isn't it great?

During the past two years you have given many successful concerts around the world, among others in London and at the Konzerthaus in Vienna. What was it like for you to be in Germany?

﻿Jandali: I was born in Germany and went to Kindergarten here, so this was where my first introduction to music occurred. We moved to Syria when I was six. But until the age of 12, I used to come to Germany every summer, to the "Sommerschule" in Waldbröl, a small town not far from Bonn, and take piano lessons. Unfortunately, I lost touch with my teacher, Mrs. Schneider. So my last visit here dates back to the 1980s, almost 30 years ago. 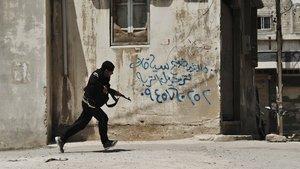 Malek Jandali: "This regime has applied a strategy to hijack minds." - Pictured: A Syrian rebel runs for cover at the Sunni district of Jabb al-Jandali in the city of Homs

​​It is wonderful to be back. Germany is a beautiful country. The concert at the Capitol in Offenbach was a great way to meet the Germans and the Syrian community and support the Syrian children in their revolution for freedom.

From the age of six, you grew up in the city of Homs. How did you manage to study piano there, more than 30 years ago?

﻿Jandali: Actually it was pretty challenging to find a piano teacher at the time, because there wasn’t a music school in Homs. But there was an excellent piano teacher at the Tchaikovsky conservatory in Damascus. I had to travel every Thursday from Homs to Damascus for two hours, take my piano lesson and come back by bus. Later I applied for studies abroad and I got a full scholarship for the US.

You grew up under the Baath regime and travelled between the US and Syria when the Baath regime was still stable. To what extent did you internalize the Baath ideology and how did you manage to rid yourself of it?

Jandali: To be honest, you're sitting in front of a professional liar. I lied every morning. I loved Bashar in the morning and I hated the system in the afternoon. They force you to say: I sacrifice my soul and my life to Assad.

Every morning at school. Then you go home, and your parents tell you that Assad is not good. This is schizophrenic, and it all happens when you are still a child. 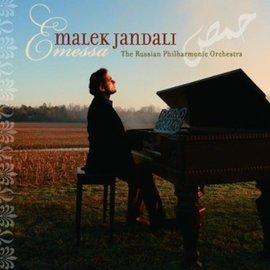 Dedication to Ibrahim Al-Qashoush: the amateur poet from Hama was noted for mocking the regime. On 4 July 2011, Qashoush was found dead, his throat cut and his vocal cords ripped out. After his murder, fellow protesters hailed Qashoush as the "nightingale of the revolution"

​​After I came to the US, it took me a good 10 years to cleanse my soul, to be honest, to tell the truth and not lie.

Many famous Arab artists, like the Lebanese singer Fairuz or the Syrian singer Sabah Fakhri, have so far remained silent over the violence of the Assad regime. Why this silence, do you think?

Jandali: It's disgusting. This regime has applied a strategy to hijack minds, including the minds of artists. It has succeeded in withdrawing the humanity and freedom and the essence of feelings, of human feelings from people’s hearts. An artist who does not stand alongside the children of Syria at this moment in time is not a human being. I call them "the empty drums", since they are just drumming to the crimes of the dictator.

Do you think that musicians in Germany and Europe should take a clearer stand in favour of the Syrian revolution?

Jandali: We need to differentiate between ordinary people and governments. My album "Emessa", which was the old name for the city of Homs and which I dedicated to the Syrian revolution, was recorded together with the Russian Philharmonic Orchestra. To me this means that the people of Russia are with the people of Syria, not with the government. Some of the musicians in Moscow cried when we recorded the piece "Al-Qashush". For me, art is a universal message, the search for beauty and truth.

You composed the piece "Al-Qashush symphony" in 2011 and dedicated it to Ibrahim Al-Qashush, a fire-fighter from Hama who stood up in public and sang a very famous song against Bashar Al-Assad. Al-Qashush was brutally tortured, murdered and mutilated, the perpetrators were most probably thugs in the pay of the Assad regime. What do we know about Al-Qashush? Did he really compose the song "Go away, Bashar"?

After you published the Al-Qashush Symphony in the spring of 2011, your parents were targeted by regime bandits in Homs. Their apartment was looted and they were both badly injured. How did you feel when that happened? Did you ever think of stopping your public statements against the Assad regime?

Jandali: It was very difficult, to be honest with you. You feel very guilty, useless and weak. It was a shameful act to go and beat my mother and break her teeth, at a time when they couldn't come after me. I am a US citizen, they could not touch me. But you know, to me this was a measure of honour. If this is freedom, I love it to death, I am ready to die.

Some people argue that even if Assad disappears, the Syrian people will not be better off, because Syria will fall apart, socially and geopolitically.

Jandali: Every moment of delay makes the situation more difficult, because we are witnessing the fall of humanity. But I don't want to give up hope. I think that we can build a new, better Syria. The people of Syria have the potential to become a beautiful symphony with different colours. The only thing we are missing is the beat of freedom. The soil of Syria is the cradle of 10,000 years of civilization. The alphabet and the first musical notation were developed in Ugarit, and even the inventor of the Apple computer, Steve Jobs is somehow related to Syria – his biological father was a Jandali from Homs and a cousin of my father.

We don't want to have a little crook, a liar telling us: "Oh, your civilisation is only 40 years of Assad!" Let me put it differently: We are already free. There is no return. Bashar Al-Assad is a war criminal who must answer to the ICC for all his crimes.

Are you able to be creative, seeing the endless violence and horrors in Syria?

Jandali: We are witnessing disturbing news every day, but it is an historical moment for the Syrian people and for me personally this is an immense source of inspiration. They bomb people who are lining up for bread in the street – it is horrible, but it reminds you of the price of freedom.

Do you have any new projects?

Jandali: My upcoming project is a Syrian symphony, with four movements, full orchestra, close to 60 minutes of music. It is going to be a major symphony and it is almost finished. Most of the themes and motives are from the streets of Syria, from the revolution. At a later stage, I would like to introduce it to big orchestras and venues around the world. I see it as my duty to present the nobility of this revolution in some of the most respected places on earth. Because that's what art is: it is soft power.

Young women are driving forward the protests against the Iranian regime, which have been going on for months. Literature provides clues as to why that should be, and why the ... END_OF_DOCUMENT_TOKEN_TO_BE_REPLACED

Visiting the country of her parents, murdered by the Iranian regime in 1998, German-Iranian artist Parastou Forouhar finds a changed society: hopeful, strong and courageous, ... END_OF_DOCUMENT_TOKEN_TO_BE_REPLACED

Iran's president Ebrahim Raisi is overseeing an unyielding crackdown. The current situation grimly echoes his role in a purge of political prisoners in 1988 END_OF_DOCUMENT_TOKEN_TO_BE_REPLACED

Ballet performances are prohibited in Iran. In her film "1001 Nights Apart", director Sarvnaz Alambeigi documents the history of dance in the Islamic Republic. By Fahimeh Farsaie END_OF_DOCUMENT_TOKEN_TO_BE_REPLACED

Chinese President Xi Jinping's visit to Saudi Arabia in December 2022 may have rattled Washington, but it simply highlighted the Arabs’ desire to diversify their foreign relations ... END_OF_DOCUMENT_TOKEN_TO_BE_REPLACED

There are signs of an imminent normalisation of relations between Turkey and Syria. This would allow Erdogan to score political points domestically before the upcoming elections ... END_OF_DOCUMENT_TOKEN_TO_BE_REPLACED

Comments for this article: ''We are witnessing the fall of humanity''

Malek Jandali is the elegant voice of the historic Syrian Revolution.

END_OF_DOCUMENT_TOKEN_TO_BE_REPLACED
Social media
and networks
Subscribe to our
newsletter