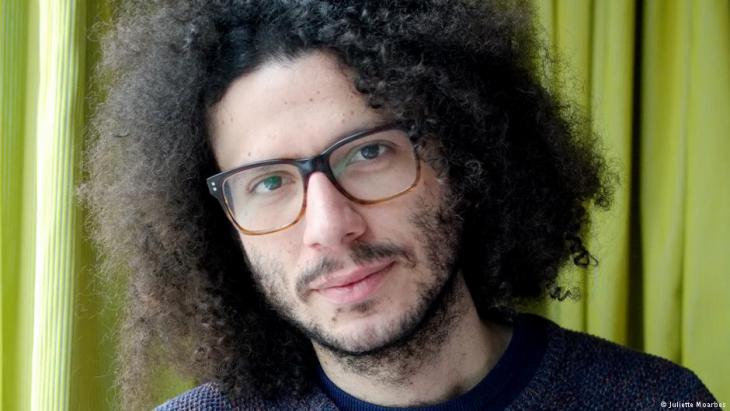 "Refugee is my situation"

He covered the demonstrations against Assad, was thrown into prison, yet managed to escape. More than anything, however, Ramy al–Asheq is a writer. In interview with Sarah Hofmann, he explains why the "Weiter Schreiben" initiative is so important to him

You're taking part in the recently launched "Weiter Schreiben" project ("Continue Writing"). The aim is to publish texts by authors who were forced to flee their homeland and now live in Germany – just like you. You escaped Syria and now live in Cologne. How important is it for you to be able to publish your work?

Ramy Al-Asheq: This is one of the most important things for me as an author. I don't know how to build a house or how to open a restaurant. The only thing I know is how to write. Everything I do is related to my language. I think, I write, I publish – everything in my language. I said in one poem of mine: "You were a bird migrating to a country/That does not fathom the language it chirps." So for me, the most important thing here in Germany was to continue to write – "weiterschreiben," just like the project says. And to be translated.

Your first text for the project is titled "Fatma traegt zwei Wunden in der Hand" ("Fatma bears two wounds in her hand"). It's a poem about a woman, Fatma, who follows the path of many recent migrants from the Middle East and North Africa: she tries to flee across the Mediterranean in a boat. Why did you pick this story for the start of the project? 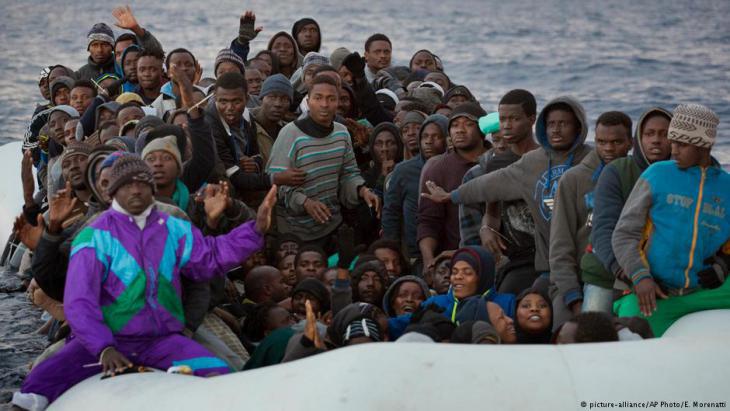 "But it is a disgrace to the world that we have 65 million refugees worldwide. I don't believe in borders. I am not Syrian, or Palestinian, or German. I don't have a problem with the term refugee, but this is not my identity. I am an author. Refugee is my situation," explains Rami al-Asheq

Al-Asheq: Fatma is my mother, so this poem is very special to me. It's very personal, but at the same time, it's about a very common experience among refugees. When I wrote the poem in 2015, I didn't know if Fatma would survive. I was traumatised, waiting for news. Everyone who has ever waited for someone knows this kind of emotion. The good news is: Fatma survived. She now lives in Mulheim an der Ruhr. But I also like the poem for another reason: it's very rhythmic and I hope also in German!

You had to flee Syria after you covered the demonstrations as a journalist at the start of the Syrian civil war in 2011. You also wrote lyrics for a number of revolutionary songs. To what extent does politics influence not only your life, but your writing as well?

Al-Asheq: Everything has an influence on my writing: death, refuge, home, politics and war. But actually, I don't write about them, I use them as an author to build a good text. So the question is how you use it. If I write about politics, then I do this as a journalist. I have a critical mind – about what goes on in Germany too. But with poems it's completely different. Literature needs to wait until the emotion dies down. I have experience writing both as a journalist and as an author.

When I wrote the song lyrics I was still in Damascus, in the midst of the demonstrations. Now I'm no longer there and I don't like these lyrics any more. But when I consider the situation, I know they're OK. It's very different if you're inside or outside the situation. Fear changes everything, even your writing. My mother, for example, was far more afraid waiting outside the prison than I was inside. Now that we are in exile, we are more afraid than those people still in Syria. I ask myself, how can literature help in these horrible times? Destruction is real. The blood is real. Reality today is stranger than fiction. 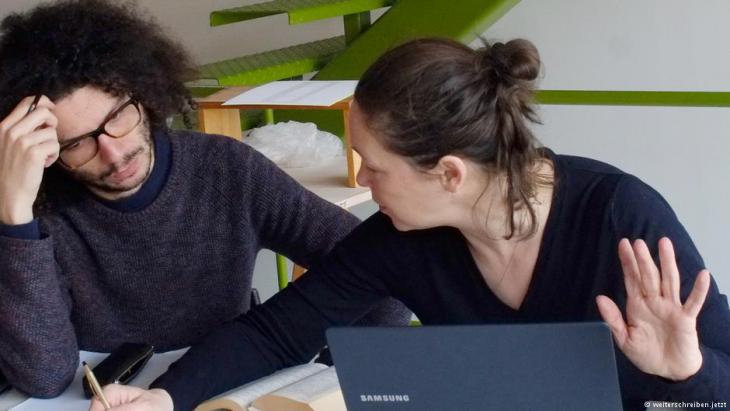 Successful tandem arrangement: "when I sat down with Monika, I didn't expect that she would immediately begin to work. I thought we would first chat a bit, discuss books, the literature scene and so on," comments Ramy al-Asheq on his work with the Berlin-based author

You grew up in the Yarmouk Camp for Palestinian refugees in Damascus. One could say you were born a refugee, even before the war in Syria. What does the term "refugee" mean to you?

Al-Asheq: I am a refugee – I was born a refugee, my father was born a refugee. I am not ashamed of being a refugee. But it is a disgrace to the world that we have 65 million refugees worldwide. I don't believe in borders. I am not Syrian, or Palestinian, or German. I don't have a problem with the term refugee, but this is not my identity. I am an author. Refugee is my situation. This is why this project is important. It doesn't deal with us as refugees, but as authors.

The idea behind the Weiter Schreiben project is to form a team of two authors – one German and one who was forced to flee his home. Your partner is Monika Rinck. What is it like working as a two-author team?

Al-Asheq: This is really the most interesting part of the project, not the publishing, but the working in tandem. When I sat down with Monika, I didn't expect that she would immediately begin to work. I thought we would first chat a bit, discuss books, the literature scene and so on. I thought: are you serious?

I also wrote about this experience with her. During our second meeting, she translated one of my poems from English to German and we discussed the images and the meanings. We also read together and she explained what it is like to work as an author in Germany. This exchange is very useful. It gives me the chance not only to be in need of help, but also to give something back in return. The idea of the project is not to help refugees, but to bring people together on the same level to their mutual benefit.

Ramy Al-Asheq is a writer, poet and journalist. At the start of the Syrian revolution in 2011, he began covering the demonstrations for various media outlets and wrote lyrics for a number of revolutionary songs. In July 2011, he was arrested by the Assad regime. Upon his release, he went into hiding and, the following year, fled to Jordan, where he published his first book, ″Walking on Dreams″. Having been awarded a writing fellowship by the Heinrich Boll Institute, he moved to Cologne, where he has lived since November 2014.

The terror attacks in Paris, Brussels and Berlin were all carried out by men radicalised in jail. In Germany, politics and the judiciary are trying out new approaches to prevent ... END_OF_DOCUMENT_TOKEN_TO_BE_REPLACED

Elke Muller is fighting for her daughter Anna, who fell in love with a young Afghan and converted to Islam. The mother spoke to Esther Felden about feeling alienated and her fear ... END_OF_DOCUMENT_TOKEN_TO_BE_REPLACED

As historian Wiiliam Dalrymple writes in his essay, scholars are only now beginning to realise the extent to which the Mughal emperors adopted what most would assume to be ... END_OF_DOCUMENT_TOKEN_TO_BE_REPLACED

There's not much to see yet, but it's clear that Cologne will be home to a new museum dedicated to migration. The government will provide funding to see the Central Museum of ... END_OF_DOCUMENT_TOKEN_TO_BE_REPLACED
Author:
Sarah Judith Hofmann
Date:
Mail:
Send via mail