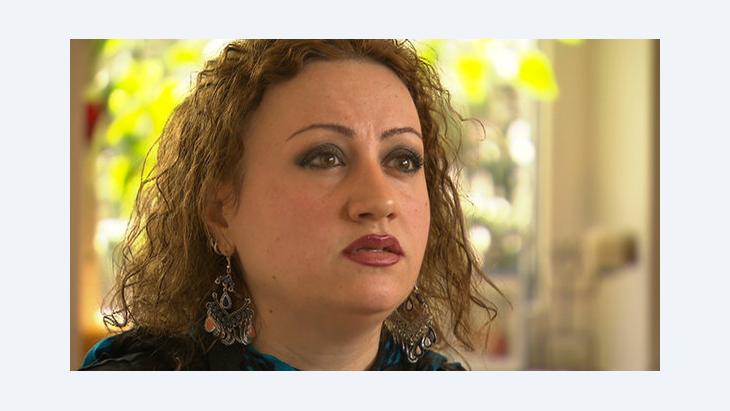 ﻿Until a few months ago, Rosa Yassin Hassan was filing daily reports on the war in Syria in her blog, "Diary of the Syrian Revolution". Her accounts detailed both the suffering of civilians and the brutal acts committed by both the regime and the opposition. Persecuted by the regime, she fled to Germany in the autumn of 2012. Laura Overmeyer spoke to her

In September last year, you and your family were able to escape to Germany with the help of the Heinrich Böll Foundation. You're currently a guest of the Hamburg Foundation for Politically Persecuted People. How are you?

Rosa Yassin Hassan: We feel safe and well here in Germany, but our hearts are still in Syria. People there are facing grave danger every day, and our thoughts are always with them.

Your reports, which were critical of the regime, not only exposed you to the dangers of the war, but also resulted in personal persecution. In view of this double-edged threat, what made you stay for so long?

Hassan: The revolution was a dream for each and every one of us. Once it had begun, I didn't want to leave the country, even though Assad unleashed a brutal crackdown right from the outset and the dangers increased by the day. I wanted to play my part in this revolution, and I did this through writing. But the situation got noticeably worse: friends and acquaintances were detained or killed. When my son was almost killed in an attack, we decided it was time to go.

Since the beginning of the revolution, you've been reporting on developments and the brutal acts being committed against the Syrian people in your blog "Diary of the Syrian Revolution", which has garnered a lot of international attention. What was your motivation for doing this?

Hassan: I recorded the things that weren't shown by the media: what people are feeling, what they are experiencing. I wanted to show the world what is happening in Syria and what the situation is really like – from a human, not a political perspective. Every country has its own interests in relation to Syria and the debate often misses the most important issue: humanity.

The Syrian people are suffering, the entire Syrian population. I saw the suffering and it was my duty to report on it. I've experienced shocking and moving stories and felt the pain of every individual. I've also got to know my nation and my people better and met people with whom I would never have had any contact before because our society has been divided by the regime. 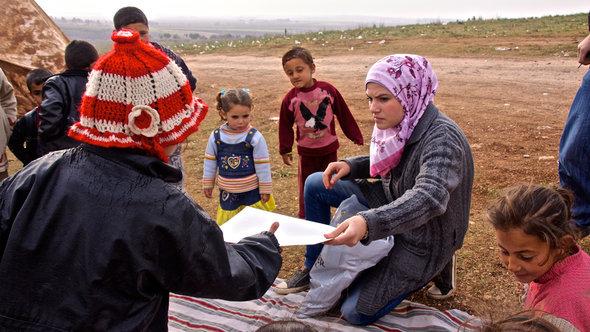 The human tragedy of war: many Syrian families who have sought refuge in neighbouring Arab states and in Turkey are living in catastrophic conditions. The UN fears that the number of refugees fleeing the conflict in Syria could triple by the end of the year

Do you think that media portrayals of the Syrian conflict are inadequate or distorted?

Hassan: The media are only reporting on a tiny aspect of the conflict – generally only the things that the politicians in the respective countries want to hear. For example, some coverage reduces the revolution to the menacing Islamisation by Jihadist groups, because this represents the greatest fear in that particular country. It's as though there's a huge dark wall, and they are shining a torch on one single spot and claiming that this represents the entire surface of the wall. But the revolution is so much more than that! The media – especially the Arab media – distort the truth in accordance with their own interests.

But the situation is extremely difficult to gauge. Is it really possible to retain a reliable overview, even if you do remain in the country?

Hassan: It's difficult. You have to rely on reports by courageous young activists, many of whom sacrifice their lives for a photo or video in order to bring at least some shred of truth to light.

Syrian media are controlled by the regime; they disseminate a false picture of what's happening at home. This picture has resulted in a fragmented society, causing Syrians to kill their own brothers. The media and the government have divided the Syrian people along confessional lines.

Do you think these fissures are permanent, or will Syrians survive as a united people?

Hassan: I think if the regime remains in power and continues to perpetrate acts of violence, then it will result in a civil war.

The conflict is often already described as such…

Hassan: No, it's not a civil war yet. It's true that confessional groups are fighting against each other, that Syrian soldiers are killing Syrian rebels and vice versa. But it's still not a civil war. If a civil war is to be avoided, the government must fall. The Syrian people will only find unity in a democracy, and that will not come about as long as Assad is in power. The sooner the regime goes, the greater the chance that we'll be able to rebuild our nation and grow together to form one society. Whatever happens, this will be a long, drawn-out process.

Recent media reports claim that Assad appears to be regaining the upper hand thanks to military support from Russia, Iran and Hezbollah. Do you think he can hold out much longer? And what is your view on the peace conference scheduled for Geneva in June?

Hassan: Assad has been receiving support since the start of the revolution, but these units kept dispersing. I doubt that he really holds the military advantage, because the opposing side is also receiving foreign support. Neither the opposition nor the regime can make their own decisions because they are being controlled from outside.

Many foreign countries have intervened in Syria to represent their own interests there: the US, Saudi Arabia, Qatar, Turkey and Israel – which I believe greatly fears the fall of Assad because he guaranteed Israel's security and existence. Ironically, this is a view shared by Hezbollah. The situation is highly complex, and this is why no one can predict what's going to happen tomorrow, when and if the regime will be toppled.

Assad won't be taking part in the peace conference and even if he were sitting at the table, no agreement would be reached. It's too late for that now. If the West had intervened earlier at a political level, perhaps the bloodshed could have been prevented, but unfortunately, for a long time the conflict in Syria simply wasn't taken seriously enough.

Now that you're in Germany, you can't continue your work as chronicler of the revolution. How can you continue to play in a role from here?

Hassan: Luckily I was able to take all my notes out of Syria, so I'll begin writing a novel, processing everything that's happened in Syria since the start of the revolution in 2011. I'll describe the protest movements, allow both sides to have their say – after all, both sides belong to Syria. The fragmentation of society will be one of the novel's main themes.

Do you already have a title?

Hassan: "Those Touched By Magic". The moment we were gripped by the revolution was like magic. As soon as you're touched by this magic, you can no longer return to your old life. You'll never be the same again. The entire population of Syria was touched by this magic, and the changes will affect each and every person.

The writer and human rights activist Rosa Yassin Hassan was born in Damascus in 1974. She has won several accolades for her literary work, which includes the novel Ebony and a collection of stories titled A Sky Tainted With Light. She has also found a wider audience through her blog, the "Diary of the Syrian Revolution", which contains unsparing reports of the daily life during the Syrian conflict, some of which have been published in international media. She is currently living with her family in Hamburg as a guest of the Hamburg Foundation for Politically Persecuted People, as well as the Hamburg Initiative for Human Rights.

Home
Print
Newsletter
More on this topic
Civil War and Cultural Protest in Syria: ''The Revolution Has Become an Orphan''Interview with Sharif Nashashibi': 'No Sovereign Government Has the Right to Oppress Its Own People''
Related Topics
Arabellion, Arabic literature, Democracy and civil society, German-Arab Literature Exchange, Syrian Civil War, Syrian opposition
All Topics

Past attempts to reconcile logic and belief within Islam tend to be dismissed today – not because they lack merit, but because they were politically defeated, argues Mustafa Akyol END_OF_DOCUMENT_TOKEN_TO_BE_REPLACED

November 2022 sees the Arab world firmly in the spotlight with the COP27 in Egypt and the FIFA World Cup in Qatar. Public trust in MENA governments is weak, thanks to their ... END_OF_DOCUMENT_TOKEN_TO_BE_REPLACED

Thanks to climate change, the Middle East is heating up faster than any other part of the world, putting the region's ancient pyramids, castles, holy and other heritage sites at ... END_OF_DOCUMENT_TOKEN_TO_BE_REPLACED

After a two-year hiatus, the Arab League re-convened at the beginning of November in Algiers against a backdrop of uncertainty and discord. By Pierre Boussel END_OF_DOCUMENT_TOKEN_TO_BE_REPLACED

In the run-up to the COP27 global climate summit, hosted by Egypt in November, it is worth noting that little rainfall, aggressive heatwaves and worsening drought make the Middle ... END_OF_DOCUMENT_TOKEN_TO_BE_REPLACED
Author:
Laura Overmeyer
Date:
Mail:
Send via mail

END_OF_DOCUMENT_TOKEN_TO_BE_REPLACED
Social media
and networks
Subscribe to our
newsletter