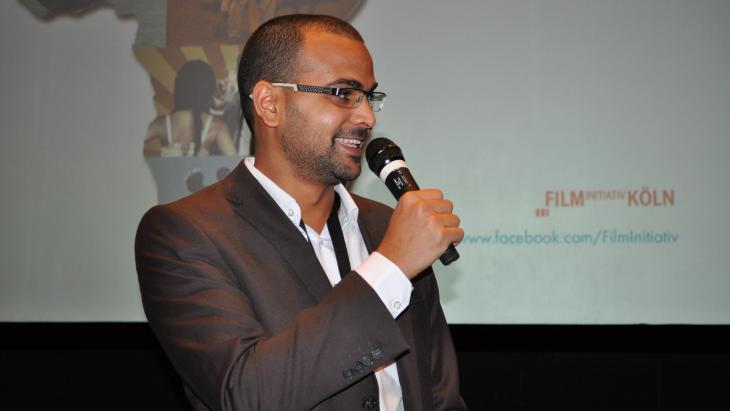 In conversation with Martina Sabra, the Tunisian literary scholar and documentary filmmaker Sami Tlili talks about the political future of the North African country following the recent parliamentary elections, and the democratic prospects three years after the "Jasmine Revolution"

On 26 October, the people of Tunisia were called upon to elect a new parliament. What do you think the results will be? Many are assuming that it could come down to a coalition between the Ennahda Islamists and the secular conservative collective party Nidaa Tounes.

Sami Tlili: The two big winners will be the Islamists and the old regime. I think they'll divide the cake between them, because they have common interests, Ennahda and the old guard of the RCD. Even if they're calling themselves Nidaa Tounes now, for me they're still the old party of Zine el-Abidine Ben Ali and Habib Bourguiba. But to be honest, I don't think it's all that dramatic. As citizens, we have the responsibility to bring about change. And I think there are a lot of important developments that don't happen at the ballot box, anyway.

In your opinion, what role could former RCD representatives play in a new Tunisia? And what do you think of the fact that many former trade unionists and former opponents of Ben Ali have joined Nidaa Tounes, like for example the women's rights campaigner Bochra Belhadj Hamida, who is standing in Tunis?

Tlili: What is Nidaa Tounes if not a polished rehash of the old RCD unity party? In my view, they sacrificed the head of power – and only the head – in order to save the system. They've given the former RCD a modern appearance, by bringing into play a few people claiming to be independent or intellectual.

But you also have to see that Ennahda and Nidaa Tounes have the same economic programme: ultra-neo-liberalism, partly supported by the exact same powers both inside and outside Tunisia. The only difference is the ideology. The working capital of Ennahda is more Islamist, and that of Nidaa Tounes is more modernist. However, I see the modernity of Nidaa Tounes as a facade. Modernity doesn't just mean that people are allowed to drink beer. You have to modernise the institutions, the state. For me, that's modernism. 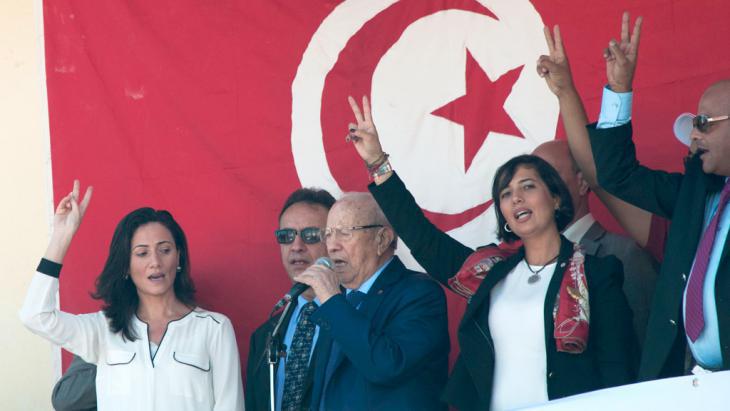 The old regime in a new guise? Pictured here: Beji Caid Essebsi (third from left), founder and leader of the political party Nidaa Tounes, and fellow party members at an election rally in Hammam-Lif. "What is Nidaa Tounes if not a polished rehash of the old RCD unity party? [...] They've given the former RCD a modern appearance, by bringing into play a few people claiming to be independent or intellectual," says Tunisian documentary filmmaker Sami Tlili

What you're saying sounds like the whole political system is taking a step backwards. How will the Tunisian people react? Will the poor take to the streets again?

Tlili: The poor are part of the grassroots of both Nidaa Tounes and Ennahda. The young people had the courage to take to the streets and set the process of change in motion. That was crazy and incredibly brave. Now we need protective measures to safeguard the political process and the transition to democracy. It's clear that this is a long, difficult road. But even if the next elections initially bring back the old powers, it's not a tragedy. That's part of the process of revolution: it moves forward, there are setbacks, and then it moves forward again. The important thing is to keep up the motivation – the revolutionary consciousness that change is possible, and that we can all contribute to it.

Let's talk about your film work. You were born in Kairouan in 1985 and grew up in Legtar (Lortess), south of Gafsa – one of those regions that has been neglected by one regime after another following Tunisian independence in 1956. Prior to your first full-length documentary, you made three short films. One of these three films – entitled "Sans Plomb" (Unleaded) is about a young man from the province who sets fire to himself out of despair. The film was made in 2006. How did you come up with this topic at the time? Before Mohamed Bouazizi, whose self-immolation in December 2010 was the catalyst for the Tunisian revolution, was there a specific case that was well-known?

Tlili: Yes, there was already a precursor at that time and above all a great deal of despair. I wrote the screenplay with a friend of mine. We wanted to describe our everyday lives, the depressive mood among young people in Tunisia in the 1990s and 2000s. We felt we were literally being massacred by the Ben Ali regime; the youth was being suffocated. Our only choices were to get out of there or enter an inner emigration. "Sans Plomb" is about this total desperation. 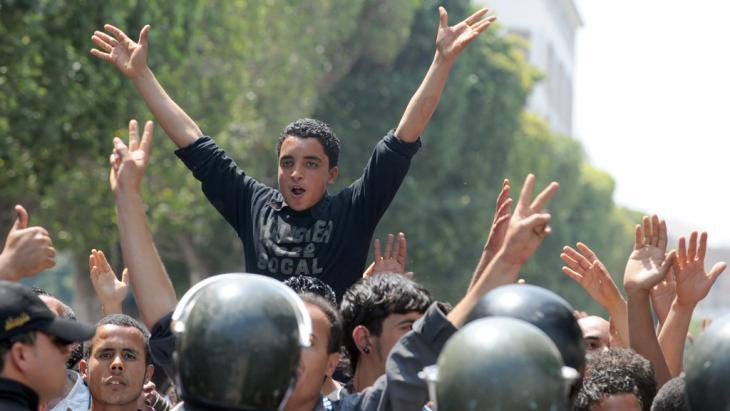 The cry for freedom: young people demonstrating against the regime of Zine el-Abidine Ben Ali in Tunis in 2011. According to Sami Tlili, Tunisia from the 1980s to the revolution of 2011 was a suffocating place to live, especially for young people

In 2011 you started work on your first long documentary film. But it wasn't about the revolution; it was about an event that had happened three years previously – the 2008 uprising in the phosphate-producing region. Why did you choose to look back at that particular moment and make "Cursed Be the Phosphate"?

Tlili: I wanted to ask why the development process that followed Tunisian independence in 1956 failed. The unity party's regime was actually a regionalist regime. The areas that Bourguiba and Ben Ali came from were forcibly developed over several decades, while other regions were sometimes deliberately neglected. I think that in the modern history of Tunisia, there are a lot of episodes that have disappeared from the collective memory – which means we are doomed to repeat our history over and over again. We have to change that, and that's why, in spite of the exciting events that followed the revolution, I made a conscious decision to look to the past.

What, in your opinion, was the significance of the 2008 uprising? And where do you see the connection between that and the revolution that started in 2010?

Tlili: The uprising in Gafsa was a protest movement on an unprecedented scale, the like of which modern Tunisia had never experienced before. The protests lasted a very long time, six months in all. A large part of the population took part in them; they were non-violent, and they went hand in hand with people taking possession of the public realm. That was highly symbolic. When I saw the way the people were occupying the streets, I couldn't believe my eyes. After all, ever since independence, ever since Bourguiba, Tunisia had been a police state through and through.

Where does Tunisia stand today with regard to the transition to democracy, or to a democratic system?

Tlili: We are currently in a transitional stage on the way to democracy. The revolution isn't over. And it didn't just begin on 14 January 2011. Anyone who claims that has a political agenda. For me, the Tunisian revolution started on 17 December 2010, when people took to the streets in Sidi Bouzid. If the only date you bring up is 14 January 2011, you reduce the revolution to the fall of Ben Ali, as if all problems were solved when he went. That's playing with the collective unconscious: they want to fix a single perception of events in people's minds.

I think we've reached a crossroads. The aims of the revolution were actually represented by a minority of Tunisians. When they took to the streets, they shouted: freedom, dignity, work. Their issue was neither Islam nor cultural identity. Other people did everything they could, right from the beginning, to nip the revolution in the bud. These are people who were closely connected to the old regime and who carried out the counter-revolution. 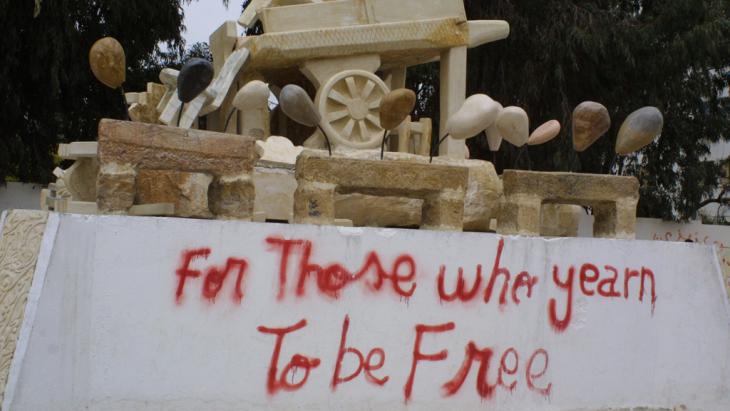 A simple memorial to Mohamed Bouazizi, whose self-immolation in protest at police harassment in Sidi Bouzid on 17 December 2010 and his death early the following month triggered the Jasmine Revolution of 2011 and the events of the Arab Spring

I hear realism in your answers, but also a cautious optimism. What else have you won since the start of the revolution in December 2010?

Tlili: As a nation, we are certainly freer than before. But I also want to answer that question in a very personal way: I have made my peace with myself and my country. That's very important because as a child of the 1980s, I was one of the many people who either went abroad or into inner emigration. We had lost hope.

But now we can hope again. We have taken back the public realm that was completely barred to us. A lot of things have got better. However, the really big problems still haven't been solved: high unemployment and widespread poverty. Freedom of speech is a pillar of democracy, without doubt. But we have to do everything we can to solve the social and economic problems. Those were the aims of the revolution, and this is where the country's future will be decided.

The documentary film maker Sami Tlili (born 1985) gained his first cinematic experience as a member of the Federation of Tunisian Cinema Clubs. After three short films, Tlili released his first full-length documentary, "Cursed be the Phosphate", in 2012. In it, he looked at the neglected mining regions of southern Tunisia, and the country‘s unsolved economic and social problems. Tlili currently lives in Paris and Tunis.

Liberal Islam: everything revolves around the Koran. In the search for a liberal interpretation, peculiar constructs occasionally emerge. By Alexander Flores END_OF_DOCUMENT_TOKEN_TO_BE_REPLACED

EU parliamentarian Dietmar Koester criticises the Union's failure to speak up when faced with human rights abuses committed by its Middle Eastern allies, while pointing out that ... END_OF_DOCUMENT_TOKEN_TO_BE_REPLACED

In her third and most recent novel, Paris-based Algerian author Kaouther Adimi writes almost prophetically about a rebellion by a handful of children against the rigid and ... END_OF_DOCUMENT_TOKEN_TO_BE_REPLACED

Mass protests began in Egypt on 25 January 2011. They triggered the overthrow of long-time ruler Mubarak. Ten years later, many human rights activists and journalists are in ... END_OF_DOCUMENT_TOKEN_TO_BE_REPLACED

Mass protests began in Egypt on 25 January 2011. They triggered the overthrow of long-time ruler Mubarak. Ten years later, many human rights activists and journalists are in ... END_OF_DOCUMENT_TOKEN_TO_BE_REPLACED

As the photo of Fairouz talking to French President Emmanuel Macron spread around the world, many asked if Arabs today had any contemporary stars of Fairouz's standing. In this ... END_OF_DOCUMENT_TOKEN_TO_BE_REPLACED
Author:
Martina Sabra
Date:
Mail:
Send via mail

END_OF_DOCUMENT_TOKEN_TO_BE_REPLACED
Social media
and networks
Subscribe to our
newsletter