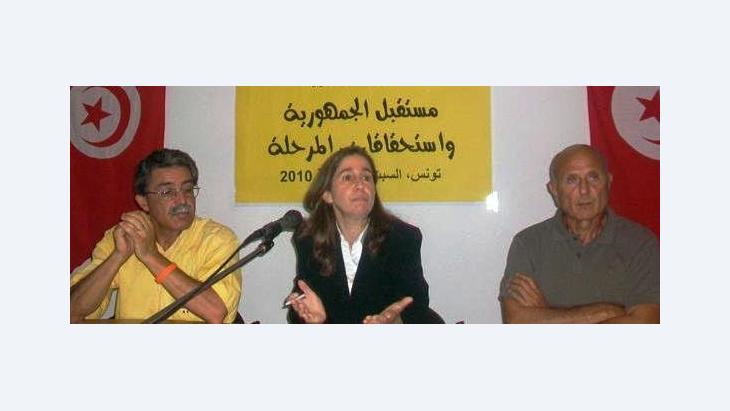 ''Tunisia Is Rooted in the Modern and Tolerant Tradition of Islam''

﻿In last October's elections, the people of Tunisia spoke and Maya Jribi, chairwoman of the Progressive Democratic Party, listened to what they had to say. Twelve months on from the revolution, her party has learned from its bitter electoral defeat and intends to merge with five other liberal parties at the centre of the political spectrum. She spoke to Sarah Mersch

One year after the revolution in Tunisia, a coalition of three parties – Ennahda, Ettakatol and the Congress for the Republic – is in power. The Progressive Democratic Party, PDP, which was an opposition party during the Ben Ali era, now finds itself back in opposition again after the country's first democratic elections.

Maya Jribi: Unfortunately, there are no two ways about it: the PDP suffered a defeat that neither its supporters, the public, nor even the political class expected.

What do you think were the reasons for this electoral defeat?

Jribi: In order to be able to remain in constant contact with the people, a party needs an entire party apparatus, and we just don't have one because we were oppressed and always in opposition during the dictatorship. What's more, we communicated in the wrong way. We were unable to explain our convictions regarding questions of identity and on social and political issues. We have now analysed our mistakes and are currently re-orientating ourselves.

Why has the PDP only now decided to merge with other parties? Why didn't it do so before the elections?

Jribi: It was a political process of growth that had to take place. After the elections, all parties took stock. 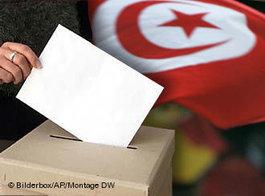 Learning the political lessons taught by their electoral defeat in October 2011: "We have now analysed our mistakes and are currently re-orientating ourselves," says opposition politician Maya Jribi of the PDP

​​The most important conclusion we reached was that we have to work together if we really want to build up a republic in Tunisia. Every republican system is based on the principle that power changes hands. This is why we need balance between the political forces. This is why we are called upon to set up a front that represents the expectations of large parts of Tunisian society and guarantees a balance of power.

The parties with which we are now going to merge and their members are as close to me as the members of the PDP. I am convinced that this fusion will be a positive thing. It will trigger an avalanche and will ensure that lots of small groups will come together, not only in the political sphere, but also in civil society. Tunisia has so much to offer, and the revolution makes it possible to make the most of all this.

Can the democratic transition succeed in the hands of the ruling coalition government of Ennahda, Ettakatol, and the Congress for the Republic?

Jribi: I have always fought to include moderate political Islam. Without the moderate forces in this movement, there can be no true democracy in Tunisia. We have always said that after a revolution, all parties that abide by the democratic rules should be involved in the democratic transition.

However, I don't consider the current coalition normal: within this troika, there are parties that are actually close to us, the forces at the centre of the political spectrum, especially as far as their social position is concerned, and that have now entered into a coalition with Ennahda out of political calculation and the desire for power. My personal convictions compel me to condemn that; politically, of course, it is perfectly legitimate.

Nevertheless, Ennahda's resulting supremacy is a cause for concern. One example is the provisional solution for the distribution of power within the state – a kind of mini constitution that will be with us until the new constitution is passed. 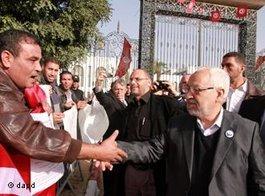 "Ennahda's resulting supremacy is a cause for concern": Ennahda, the moderate Islamist party under the leadership of Rachid Ghannouchi, emerged as the strongest party from Tunisia's first free elections and now controls key ministries

​​This solution is intended to ensure the separation of powers. However, Ennahda has ensured that with the support of its coalition partners and the resulting majority, the power centres on the prime minister. Before the 14 January, the president had all the power; now, the prime minister has all the power. So we still have to overcome a number of obstacles on our way to democracy.

Jribi: The year 2012 will be very difficult. Without social improvements, a revolution cannot succeed. And the fact that the government is making a lot of mistakes in this respect, that the various social groups do not feel that they are being taken seriously, that their demands are not being heard is making the situation even more explosive.

Apart from that, the election promises made by the parties were much too big. The people were hoping for a miracle that doesn't exist.

We need stability to attract investors and to build up the economy. But as long as the country remains instable, the investors will not come. To put it cautiously, the revival of the tourism sector has been sluggish. Moreover, many companies are having to close down as a result of the ongoing strikes and sit-ins. The government must take urgent action before the situation explodes; otherwise, the democratic development of the country will be jeopardized.

In Tunisia we can see an increasing divide between traditional, religious and modernist forces. How would you assess the current development?

Jribi: We should not engage in panicmongering. The revolution liberated all forces, including the radical ones. I believe that, culturally speaking, the vast majority of Tunisians belong to the centre of society. Islam is – and I am convinced of this – a centrist religion, and Tunisia has experienced so many reformist, moderate cultural and political movements in its time.

This is why I think that we are firmly rooted in this modern, forward-looking, open and tolerant tradition of Islam. My parties and I consider ourselves committed to this tradition. Among the Salafists, there are both peaceful movements and other movements that poke their noses into the private lives of the people and do not respect personal freedoms. If the government doesn't turn a blind eye to these extremists and if civil society can play its role, then these movements will remain small and will have to abide by the law.

Healthcare systems in Tunisia and Egypt are in a catastrophic state. The governmental response to the crisis in both nations could not be more different. Sofian Philip Naceur ... END_OF_DOCUMENT_TOKEN_TO_BE_REPLACED

As COVID-19 sweeps across the globe, it is forcing religions to adapt and take action to prevent infection. But experts warn against using the crisis to fuel conspiracy theories. ... END_OF_DOCUMENT_TOKEN_TO_BE_REPLACED

As the global economy reels and everyday life grinds to a standstill, we take a look at the spread of coronavirus across the Middle East and the wider Muslim world – and the ... END_OF_DOCUMENT_TOKEN_TO_BE_REPLACED

Since the 2011 uprisings, authoritarian rulers in the Arab world have worked out how to manipulate and instrumentalise the media to their own ends, nipping any new democratic ... END_OF_DOCUMENT_TOKEN_TO_BE_REPLACED

Decades after the first French nuclear test in Algeria, thousands of victims are still waiting for compensation. To date only 51 claims have been filed under French legislation ... END_OF_DOCUMENT_TOKEN_TO_BE_REPLACED

Many predominantly Muslim countries have penal laws against "blasphemy", "defamation of religion" and "apostasy". In practice they serve as highly effective weapons to settle ... END_OF_DOCUMENT_TOKEN_TO_BE_REPLACED
Author:
Sarah Mersch
Date:
Mail:
Send via mail

END_OF_DOCUMENT_TOKEN_TO_BE_REPLACED
Social media
and networks
Subscribe to our
newsletter