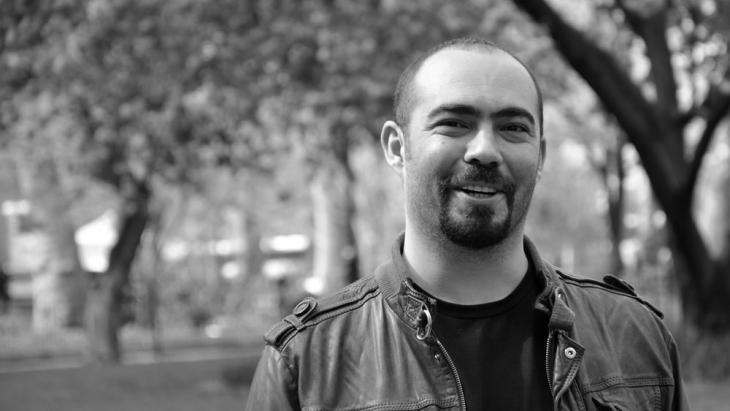 With a circulation of around 80,000, ″Uykusuz″ is Turkey's most popular satirical magazine. Writer Baris Uygur is one of its publishers. Here he talks to Ceyda Nurtsch about satirical magazines in Turkey, getting around censorship regulations and the popularity of crime fiction

Baris Uygur: There are very few countries in the world where satirical magazines are as popular as they are in Turkey. There are magazines like ″Charlie Hebdo″ in France, for example, which has been published every two weeks since 1992. In contrast to us, it tends to rely more on text, has fewer cartoons and they are sketched with a few, simple pencil strokes. The cartoons in our magazines, on the other hand, are very elaborately drawn.

As far as I know, Turkey is the only country where this sort of magazine is so well established and has such a long tradition. The magazine ″Girgir″ (fun) appeared in 1974. Before that we had ″Akbaba″ (vulture), which had been around since the 1940s and, even earlier, ″Marko Pasa″. The earliest example, ″Karagoz″, goes back to 1923, to pre-Republic Turkey and was printed in the Ottoman typeface. We can say that humorous magazines have been a feature of Turkish life since the days of Sultan Abdul Hamid II. It was after the military coup in 1980, however, when the other newspapers found themselves the targets of censorship that the heyday of satire really began. Back then, ″Girgir″ was really the only opposition and it was the coup that made it political and saw its sales soar to around 500,000. The other satirical magazines also did very well at that time. Another political magazine that was around then was ″Mikrop″ (microbe). It was the one that was closest in spirit to ″Uykusuz″. So, we have a long tradition. 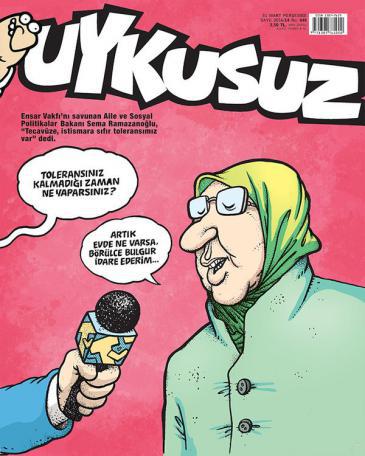 Humorous, edgy and provocative: with a circulation of ca. 80,000 copies, Uykusuz is Turkey′s most popular satirical magazine. According to its publisher Baris Uygur, even though some topics that are officially off-limits may have major repercussions or even legal consequences, what′s important is how you deal with such matters

You stress your independence and freedom because you do not belong to any media group. Are there really no topics about which you cannot write?

Uygur: No, because you can always find a way of dealing with any issue, no matter what it is. Of course there are some topics that are officially off-limits, where one risks serious repercussions, perhaps even legal consequences. For example, there is a law that protects Ataturk, the founder of the Turkish state and another that makes it an offence to insult religious values. Abuse of the military services is also outlawed. The crucial thing is how you choose to deal with such matters. You can write about any of these things and still stay on the right side of the law. One must have the professional know-how. That's why we have never fallen foul of the censor.

Is your intention just to make your readers laugh, or is there always a political message?

In general, we try to make sure that whatever approach we decide to take, it is something of which we need not be ashamed afterwards. During the so-called postmodern coup of 1997, when the military forced the governing Refah Partisi (Welfare Party) from office, I was still working for the ″Pismis Kelle″ (boiled skull) magazine. Besides the Islamic newspapers, the only ones to complain about the actions of the military were ourselves and our friends from ″Leman″, ″Ustura″ (razor) and ″Cete″ (gang) magazines. A similar scenario developed with the wave of interrogations of alleged members of Ergenekon, an organisation rumoured to be intent on overthrowing the AKP government. We made it clear at the time that we were not taking sides with any of the accused, but that we found the interrogation methods rather dubious.

One might suppose that humorists benefit most when a country is in a difficult situation. Is that really the case? 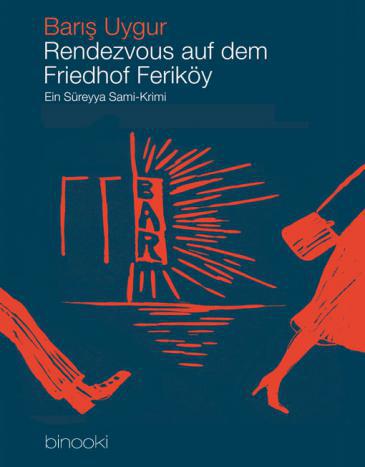 The trend in crime writing: in his new novel "Rendezvous auf dem Friedhof Ferikoy", Baris Uygur tells of the search by embittered former police officer Sureyya Sami for the disappeared woman Deniz Deren. Contrary to her husband′s opinion, he does not believe that she has been kidnapped

Uygur: You must remember that if the situation in a country is not good, then it is not good for anyone, humorists included. There are times when we become very envious of our Dutch colleagues and wish we could work like them. They are free to devote themselves to their work with nothing else to distract them. Since the Gezi Park protests we have been seeing people dying or beaten up. It is something that affects us deeply. Sometimes we are so badly affected that we don't know how to react. Then it is good to be part of a team. One of us will always come up with an idea, a way of getting to grips with an issue.

Many and often very funny cartoons have appeared on social media sites such as Facebook or Twitter since the Gezi Park protests. Are they competition for you?

Uygur: To some extent they are competition, but the humour on social media sites is not the same as what we do. It is much more of the moment. Often it involves funny responses to recent events, sometimes a joke, very funny at the time, but a week later, not funny anymore. Because we are a weekly magazine, our humour has to be a bit more durable. At the beginning of each week, we sit down together and discuss which issues we want to tackle and how we are going to do it. Nowadays, we actually publish our first page online before it goes to print, effectively claiming copyright on our jokes.

Crime stories appear to be very popular in Turkey. Your own novel, "Ferikoy mezarligi'nda randevu" (Rendezvous at Ferikoy Cemetery), the first volume in a series featuring police officer Sureyya Sami, was so popular that it went to second and third editions in the year of publication. What is it about crime that makes it so popular?

Uygur: Crime stories have always been best-sellers in Turkey and some very good novels have been written here. The first wave of popularity came in the 1960s and 70s. After translator Kemal Tahir finished translating the American Mike Hammer crime stories into Turkish, he decided to have a go at writing more, in the same style, himself. He wrote another ten of them, sitting at his desk with a map of New York, where the novels are set, spread out in front of him. In my opinion, his books are even better than the originals. In the 1980s, the interest in crime novels decreased slightly. Then, a few years ago, the genre experienced another boom and a new generation of younger crime writers arrived on the scene.

I love the books of writers such as Dashiell Hammett or Lawrence Block. At first glance, one might think that crime writing is a genre that limits its authors. But in fact I can work my own opinions and attitudes to certain things into my books. The crime novel forces me to confront reality and when I write about reality, it becomes easier to bring my own feelings and thoughts into the novel.

Baris Uygur was born in Eskisehir, Turkey, in 1978. He studied communication science and history and worked as an advertising copywriter. In addition to his work as a writer for the satirical magazine Uykusuz, he also has his own music label. His debut novel has been published in German as ″Rendezvous auf dem Friedhof von Ferikoy″ (2014) and is published by binooki.

Home
Print
Newsletter
More on this topic
Islamic satirical magazine "Cafcaf" from Istanbul: "No, nothing has been forgiven!"Interview with the cartoonist Khalil: "There is nothing that can justify this sort of violence"The Lebanese satirical magazine "Ad-Dabbour": Hornets' nest in Beirut
Related Topics
Cartoons, Free speech and censorship, Freedom of the press, Media in Turkey, Satire, Turkish literature
All Topics

This year Annemarie Schimmel, the great German scholar of Islamic studies, would have turned 100. Unique within the German and international academic community of her time, ... END_OF_DOCUMENT_TOKEN_TO_BE_REPLACED

The Palestinian militant organisation Hamas, with Hezbollah's help, is building up a military presence in Lebanon, the ultimate consequences of which could be devastating, writes ... END_OF_DOCUMENT_TOKEN_TO_BE_REPLACED

More and more voices are being raised in Turkey that challenge previous versions of the country's history. These alternative accounts, still largely ignored by official quarters, ... END_OF_DOCUMENT_TOKEN_TO_BE_REPLACED

Violence against doctors and lawyers in Turkey has been growing in recent years. But instead of taking action, the government is openly hostile towards two unions representing the ... END_OF_DOCUMENT_TOKEN_TO_BE_REPLACED

The Sufi Trail is a long-distance hiking route from Istanbul to Konya that seeks to revive the ancient tracks used by foot pilgrims on their way to Mecca. Marian Brehmer spoke to ... END_OF_DOCUMENT_TOKEN_TO_BE_REPLACED

Foresight is needed to turn the tide of German policy. Being independent of Russia must not lead to dependence on authoritarian regimes in the Middle East. By Kristin Helberg END_OF_DOCUMENT_TOKEN_TO_BE_REPLACED
Author:
Ceyda Nurtsch
Date:
Mail:
Send via mail

END_OF_DOCUMENT_TOKEN_TO_BE_REPLACED
Social media
and networks
Subscribe to our
newsletter