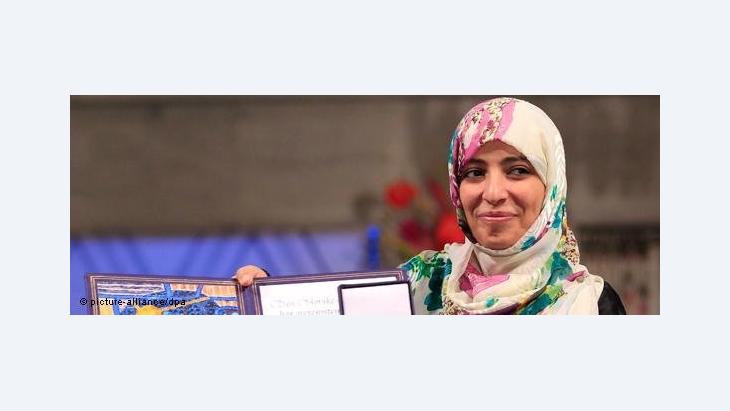 Nobel Peace Prize Laureate Tawakkol Karman has become the face of the protest movement in Yemen. In this interview with Majid Sattar, she accuses the West of failing to break with the old regime in Sana'a in deference to Saudi Arabia

Ms Karman, after receiving your Nobel Peace Prize on 10 December, you dedicated it to the Arab Spring protest movement. Are you optimistic that the revolution will triumph in your country?

Tawakkol Karman: We are moving in the right direction. Our country was on the brink of total collapse. Yemen is a failed state, economically, politically and socially. The regime is to blame for this. We are calling – in a peaceful manner – for the ousting of the corrupt and despotic regime.

President Saleh has agreed to relinquish power, but the protests continue…

Karman: We're not just calling for the president to stand down; we want a complete change of government. The entire regime has broken down. We need new, untarnished people for a civil and democratic state. Saleh has signed a declaration in Saudi Arabia in which he acknowledges that his time has come to an end. 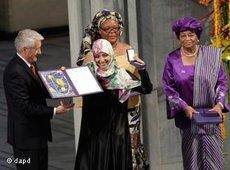 ​​That's good, but the question is: has he realised any of the promises he made in this declaration since? No! He's still in office and still retains all the authority this entails. He still has supreme command over the military. He's still holding speeches. He's still appointing political personnel. He's lying; he's deceiving the entire world. It's not just his fault; it's also the fault of those who have given him the opportunity to lie.

Karman: The blame lies with Riyadh, but also with all those that commend the Gulf Cooperation Council initiative. Most of the blame lies with the United States; they are behind this initiative. The international community has not turned its back on Saleh decisively enough, and that includes Germany. Berlin may have exerted pressure on Saleh – primarily in the UN Security Council – but thus far, words have not been followed up by deeds.

So, as far as you are concerned, the transitional government led by Vice President Abdrabuh Mansur Hadi is nothing more than a fa﻿çade? He plans to appoint a government of national unity led by designated Prime Minister Mohammed Basindawa, a cabinet that will also include members of the opposition.

Karman: These are all highly superficial changes that are totally useless. As long as Saleh is there, this transitional government will hold no sway. The young people of Yemen reject all alliances with the corrupt regime. Half of the transitional government are members of the old regime. The military and security agencies must be led by a new, independent commission. No one who serves on this commission can have blood on their hands.

You criticise Washington. Do you believe that US fears of radical Islamic forces in Yemen and of people who are connected to Al Qaeda are totally unfounded?

Karman: I don't even think that these fears exist in Washington. The Americans are only too aware of the fact that President Saleh is himself the source of terror. US intelligence services are certainly good enough to be able to confirm this to their government.

Why is it in Washington's interest not to advocate a complete change of government in Sana'a?

Karman: That's a question you should ask in Washington. Its interest should be the welfare of the Yemeni people. Only the people can drain the sources of Al Qaeda in Yemen. It is possible that the Saudis have influenced the forming of US opinion. The Saudi royal family will do anything to prevent a full-blown revolution in Yemen.

What form of government are you aiming for? What role should Islam play in the future?

Karman: We want a civil, democratic and modern state with fundamental rights for all citizens, the rule of law, pluralism and democratic participatory rights.

Karman: There are several religions in the region. We must respect the religious freedom of the individual. That's why we talk of a civil and democratic state.

Is that your personal demand? Or is it also the demand of your party, the Islah Party?

Karman: It is the vision of young people. I'm a spokesperson for the revolutionary youth. We have a programme outlining our demands, and we are calling on all social groups and tribes to join us in support of those demands.

And the Islah Party, which is affiliated to the Muslim Brotherhood movement, also wants this?

Karman: It should. I expect it to.

Why then have you announced your intention to form a new party?

Karman: It is important that young people have a political framework at their disposal, a framework that protects the revolution and allows them to pursue their political goals. The party should play a political role; 80 per cent of Yemenis are young people, and most of those killed by the old regime were young people. Up to now, they have not been organised. People only talk about existing opposition parties and the regime.

How do you perceive your future role?

Karman: I can imagine myself fighting at international level for greater rights for women and young people, particularly in the Arab world. But many young people in my country would like me to play a political role in Yemen. Many are saying they want me to stand for the presidency. There's a big Facebook campaign.

I've not yet made a decision. If I do decide to pursue a political career, there are obstacles to overcome. According to the agreement initiated by the Gulf Cooperation Council, I wouldn't have the right to stand for election. It stipulates that only one candidate can stand, and that all groups must approve that candidate in advance. It's incredible that the international community accepted such a condition.

While the ongoing legal dispute between Qatar Airways and European aircraft manufacturer Airbus has sent shockwaves across the entire global aviation sector, it may also threaten ... END_OF_DOCUMENT_TOKEN_TO_BE_REPLACED

Like Christianity, Europe's history is one of migration. Both have strong roots in the Orient and in cultures thousands of years old. Cultural historian Bernhard Braun invites us ... END_OF_DOCUMENT_TOKEN_TO_BE_REPLACED

The ruling is part of an ongoing clampdown on dissent and minorities in the kingdom. But so far, it's unlikely to have an effect on the kingdom's newly polished image as a global ... END_OF_DOCUMENT_TOKEN_TO_BE_REPLACED

On 14 August 2022, Pakistan marked the 75th year of its founding. One day later, neighbouring India celebrated its own independence with much pomp. Despite the historical and ... END_OF_DOCUMENT_TOKEN_TO_BE_REPLACED
Date:
Mail:
Send via mail

END_OF_DOCUMENT_TOKEN_TO_BE_REPLACED
Social media
and networks
Subscribe to our
newsletter