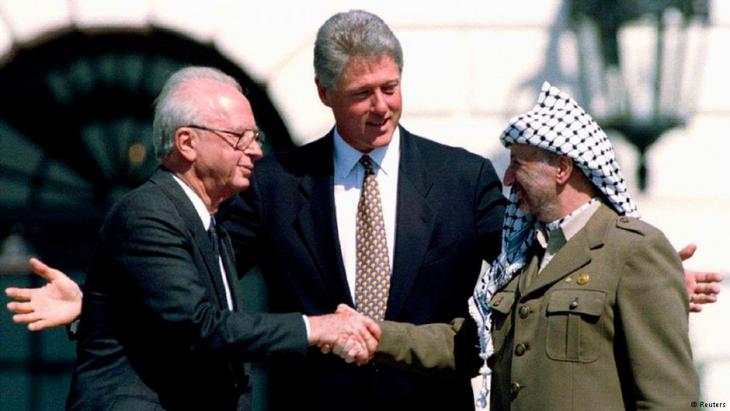 On 13 September 1993, an agreement of mutual understanding known as the Oslo Accords kicked off the Middle East peace process. 25 years on, Middle East expert Christian Hanelt interviews Israeli Yossi Alpher and Palestinian Ghassan Khatib on their experiences and their thoughts regarding the way ahead

The intended objective of the peace process that began with the Oslo Accords 25 years ago was, as I remember it, to create two states – one for the Israelis, one for the Palestinians – living side by side in security, peace, democracy, and with social security. This objective has also been stated in declarations and resolutions of the United Nations and the European Union. What are the three reasons why an envisaged two-state solution has not been achieved so far?

Yossi Alpher: Firstly, the original text of the Oslo I Accord (Declaration of Principles, DOP) did not specifically mention a two-state solution and Israeli Prime-Minister Yitzhak Rabin never endorsed a two-state solution. So, this was not necessarily the original Israeli objective. Secondly, in discussing final status the DOP unfortunately lumped together relatively solvable post-1967 Six-Day-War issues like "borders" and "security" with pre-1967 narrative issues like "holy places" and the "1948 refugeesʹ right of return" that have proven intractable. Thirdly, the DOPʹs phased approach and the two sidesʹ decision that "nothing is agreed until everything is agreed" proved too vulnerable: both to violent interventions – a few by the Israeli right and many sponsored or condoned by the PLO leader, Yasser Arafat, himself – and to expansion by the dynamic Israeli settlement movement. Today no less than 10 percent of Israeli Jews live across the 1967 Green Line.

Ghassan Khatib: The two-state solution is the underlying assumption in the peace process. It is endorsed by almost every country in the world, including all EU governments and the United States. It has not been achieved primarily because of the illegal Jewish settlement expansion in occupied Palestinian territory, which has led to the settling of three quarters of a million Israelis in the Occupied West Bank including East Jerusalem. Secondly, the change in the internal Israeli political landscape, which has led to the decline of the peace camp in Israel and the election of parties to the Israeli parliament (Knesset) that have never supported a two-state solution and opposed the Oslo I Accord (DOP). Finally, the weakness of the Palestinian side and its poor negotiating performance ultimately led to flawed Israeli-Palestinian agreements.

Over the years, governments and envoys of the U.S., the EU, Russia and the United Nations have tried to mediate, support and finance the Israeli-Palestinian track. Why has such external support and mediation not been successful?

Khatib: Firstly, the United States and Israel have never allowed other countries, especially European states, to play any real role in mediating the Israeli-Palestinian conflict, and have always insisted on an American monopoly. Secondly, mediation was never consistent with international law, including United Nations Security Council resolutions such as 242 and 338, which consider the Palestinian territory that fell under Israeli control in 1967 to be under belligerent military occupation that needs to end. Finally, the Palestinian side allowed the U.S. to monopolise mediation and did not lean enough on international legislation. The Palestinian leadership should have insisted on United Nations or international collective mediation subject to international law.

Her grandparents are Jews – born in Tunisia and Algeria. Director Cleo Cohen has now broken the silence about this with a very personal debut. By Nadine Wojcik END_OF_DOCUMENT_TOKEN_TO_BE_REPLACED

Every year in December, the team at Qantara.de takes a look back at the articles that proved most popular with our readers. This year is no different. Here is a run-down of the ... END_OF_DOCUMENT_TOKEN_TO_BE_REPLACED

Christmas in Bethlehem is usually a festive and colourful season. This year, festivities in the Palestinian town are set to return – but the COVID-19 pandemic is still casting a ... END_OF_DOCUMENT_TOKEN_TO_BE_REPLACED

Haifa is known for being Israel’s exemplary model of relative harmony between Jewish and Palestinian citizens. Its unique "Holiday of Holidays" is a joyous, multicultural event ... END_OF_DOCUMENT_TOKEN_TO_BE_REPLACED

May 2021 saw a deadly flare-up in Israel-Hamas hostilities, with eruptions of extreme violence in several of Israel's 'mixed' cities. Two weeks later, a broad-spectrum governing ... END_OF_DOCUMENT_TOKEN_TO_BE_REPLACED

Ankara is seeking to improve its relations with several states in the Middle East – such as the United Arab Emirates, Egypt and Israel. There are several reasons for this. ... END_OF_DOCUMENT_TOKEN_TO_BE_REPLACED
Author:
Christoph Hanelt
Date:
Mail:
Send via mail

END_OF_DOCUMENT_TOKEN_TO_BE_REPLACED
Social media
and networks
Subscribe to our
newsletter