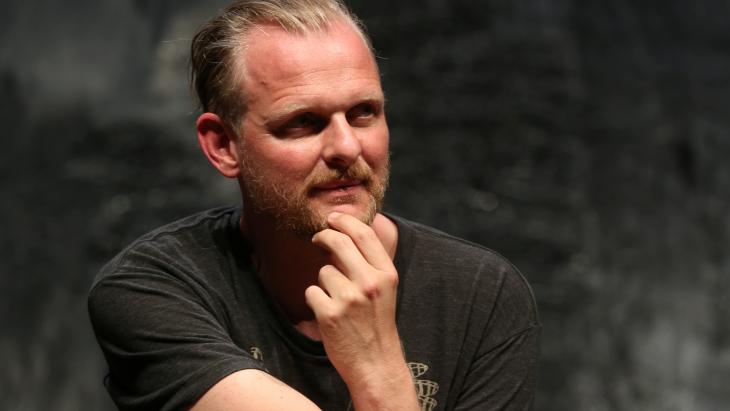 Interview with Thomas Ostermeier
"An Enemy of the People" in Istanbul

Thomas Ostermeier is the artistic director of the Berlin Schaubühne and one of the most creative figures among the younger generation of German theatre directors. His productions are incisive and provocative – something he demonstrated again recently at this year's theatre festival in Istanbul with Henrik Ibsen's play "An Enemy of the People". He spoke to Anna Esser

Why did you choose this play, and why are you performing it in Turkey?

Thomas Ostermeier: Well, it's been in the pipeline for years, but I waited for the right moment. "An Enemy of the People" is an interesting play; it's really not so much about "them" as about us. In Henrik Ibsen's socio-critical drama from the year 1882, the physician Dr. Stockmann discovers that the waters of the municipal spa are contaminated. He wants to expose the scandal, but local politicians, the media and the town's major business figures try to prevent him from doing so. The play is an assertion about political resistance and its possibilities. It is concerned with the truth, about what chance it has in our time and under the dominance of the economy, and how it is called into question. It's also concerned with the issue of what happens to the truth when media are manipulated, and when those who express that truth are also tempted into corruption. All this corresponds with the political situation in Turkey. And that's why it was also very brave of the festival directors to invite us.

Is it the job of theatre to draw attention to grievances in society?

Ostermeier: I've never considered what the job of theatre might be. I don't think theatre should fulfil a mission; that I, as a director, should explain something to someone or impose my worldview upon him, or tell him how best to do something. Instead, for me, every performance is an attempt to understand myself and my generation; it's a serious and genuine tackling of our own contradictions in an attempt to understand them. Curiously, or fortunately, this interest has been shared for many years by a large audience. 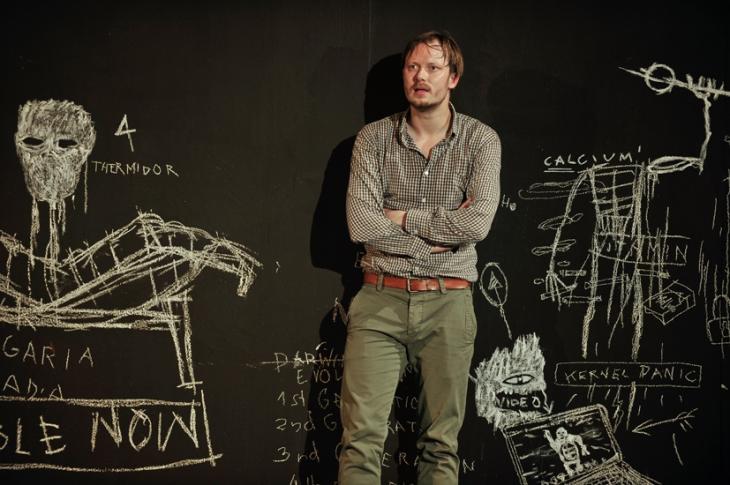 Unexpected reactions in Istanbul: "We were warned that the Turkish audience would not participate, because there's no tradition of audience participation. But in fact spectators in Istanbul were very passionate and courageous," says Thomas Ostermeier

Did you change anything about the play before performing it in Istanbul?

Ostermeier: Yes, we made two or three small changes with an eye to the Turkish audience. For example, we translated the term "rabble" with the expression "çapulcu" – a word the Turkish Prime Minister used to insult the demonstrators in Gezi Park last year. Also, we included the story about Erdoğan's advisor Yusuf Yerkel kicking a protestor following the Soma coalmine disaster.

In the final part of your production of the play, the audience is actively integrated into the action and called upon to join the discussion and express opinions. What sort of response did you expect in Istanbul?

Ostermeier: We've been touring with the play for a long time already, so I don't really have any expectations any more. In Athens, for example, we thought it would be amazing, but the audiences there were tired, with no desire or energy left to talk about politics. In New York, on the other hand, I had reckoned on very few contributions, but then I was positively surprised: People made very passionate speeches, elaborated at length, and there were also some extremely radical contributions. Quite a few members of the audience left the theatre there, too, because they suddenly felt afraid of their own compatriots.

In Turkey we were warned that the audience would not participate, because there's no tradition of audience participation. But in fact spectators in Istanbul were very passionate and courageous. The invitation extended to us was itself very bold. People kept applauding and giving us standing ovations. But we soon got our comeuppance: a pro-government Turkish newspaper printed a story the following day about a German theatre group performing an anti-Erdoğan play as a kind of "warm-up" for the anniversary of the Gezi protests. 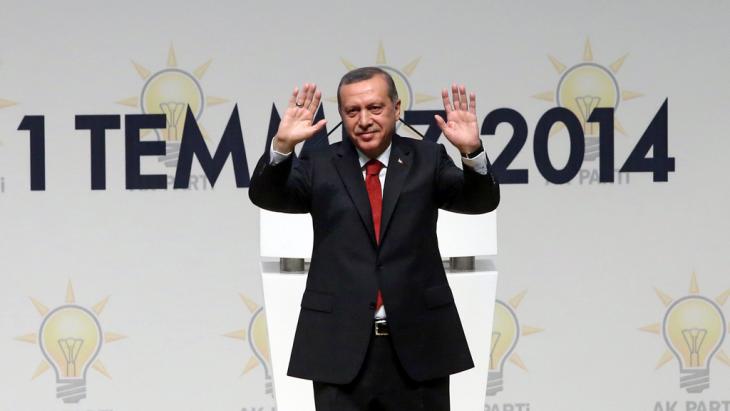 The article was headlined with the words "Alman oyun", or "German game" (an allusion to claims by Turkish politicians that foreign forces supported the Gezi protesters). It's really intense to experience something every theatre maker dreams about – a performance triggering a political reaction. What you say and do with regard to a particular issue landing on the political pages of a newspaper, not just in the arts and lifestyle section – that's something German theatre hasn't experienced in Germany for 30 years.

The audience contributions were highly personal at the first performance in Istanbul. Sometimes the boundaries between reality and drama were quite blurred…

Ostermeier: In Istanbul the contributions were more emotional than in other places. That doesn't necessarily indicate a different mentality, it's more to do with the tradition of speaking in the public realm. The practice of speaking aloud is unfortunately least developed in Germany; audiences are usually very nervous. People are very well-schooled in English-speaking countries. Here in Turkey people also don't have any inhibitions about speaking in public, but to us Germans it always seems rather solemn.

What links do you have with Turkey?

Ostermeier: At the last theatre festival in 2012 I was awarded the honorary prize of the Istanbul Foundation for Culture and Arts (IKSV), which I was very pleased about. The Turkish theatre community appears to follow everything I do very closely. I'm very moved by that.

When I read the news every day about the NSU trial and consider that I am able to work in a country that gets such a bad press in Germany – as in, honour killings – yet that we live in a country where Nazis shot dead nine Turks and a Greek national, this is really very grim. Then I'm really ashamed to be a German in Turkey. It's a form of dehumanisation. Imagine if ten Germans had been shot by Turkish Nazis what an uproar that would cause. This is always in the back of my mind during performances, interviews or audience discussions. Despite all the difficulties this country is grappling with at present, it's a very enlightened place as far as the intelligentsia are concerned.

The interview was conducted by Anna Esser

Home
Print
Newsletter
More on this topic
Art and protest in Turkey: Poking fun at the sultanTahrir and Taksim – Part I: A new culture of protestKurdish theatre company Teatra Si: Out of the cellars and onto the stageThe Istanbul Biennial: A missed opportunity for art
Related Topics
Dialogue of Cultures | Intercultural Dialogue, Gezi Park protests, Performing arts, Places of Dialogue, Recep Tayyip Erdogan, Turkish theatre, Turkish opposition
All Topics

Her grandparents are Jews – born in Tunisia and Algeria. Director Cleo Cohen has now broken the silence about this with a very personal debut. By Nadine Wojcik END_OF_DOCUMENT_TOKEN_TO_BE_REPLACED

Life imprisonment for crimes against humanity: that was the sentence handed down to Anwar Raslan in the world's first trial of a member of the Syrian torture system. Matthias von ... END_OF_DOCUMENT_TOKEN_TO_BE_REPLACED

Every year in December, the team at Qantara.de takes a look back at the articles that proved most popular with our readers. This year is no different. Here is a run-down of the ... END_OF_DOCUMENT_TOKEN_TO_BE_REPLACED

With his new album, "A Voice Keeps Calling Me", the Persian santur player Kioomars Musayyebi is building bridges from Iran across the Arab world to European early music. By Stefan ... END_OF_DOCUMENT_TOKEN_TO_BE_REPLACED

Former lawyer Said Haider has invented a chatbot for those seeking advice on anti-discrimination issues – Meta is the first chatbot of its kind in the world. In conversation with ... END_OF_DOCUMENT_TOKEN_TO_BE_REPLACED

Benjamin Idriz, imam of the mosque in Penzberg near Munich, is one of the most prominent representatives of Islam in Germany. He sees his role as building bridges to mainstream ... END_OF_DOCUMENT_TOKEN_TO_BE_REPLACED
Author:
Anna Esser
Date:
Mail:
Send via mail

END_OF_DOCUMENT_TOKEN_TO_BE_REPLACED
Social media
and networks
Subscribe to our
newsletter