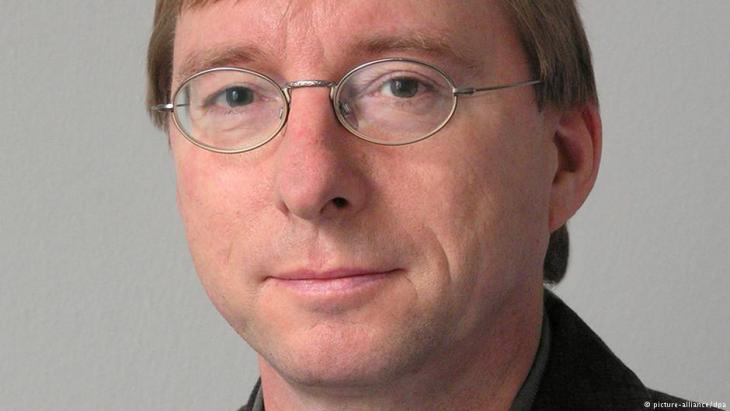 Afghanistan expert Thomas Ruttig says that in the West's battle with the Taliban, too much focus has been placed for too long on political allies with problematic credentials: many warlords are still armed and have never faced prosecution for past offences. Despite being non-democrats, they control democratic institutions to this day. Interview by Hans Spross

Parliamentary elections are set to take place in Afghanistan this coming October. Meanwhile, the Taliban and IS offshoot in Afghanistan are ramping up pressure on the government through military attacks and acts of terrorism. To what extent is a democratic reconstruction of Afghanistan possible at all in these circumstances?

Thomas Ruttig: The democratic process in Afghanistan has been in reverse gear for some time now. This is only partially due to the Taliban. We should expect that the Taliban will attack polling stations, and probably also on election day. There have been incidents like this before. We're also dealing with the local offshoot of "Islamic State", which is operating in the same manner.

But the key point here is that despite paying lip service to the concept, the majority of Afghanistan's elites don't really believe in democracy and that most of the democratic institutions in the constitution are nothing more than a facade. Some of them are being actively undermined and eroded by these elites.

The problem goes much deeper: right from the outset the focus has been on crushing the Taliban, which was initially defeated and not very strong at the time. This involved the political mobilisation of the warlords – in other words, people who were also the war criminals and human rights violators during previous episodes in the war – as allies, which meant they naturally had to be placed within these institutions. These people still carry arms, they've never been prosecuted for past offences and they’ve given themselves an amnesty in parliament that the international community never condemned. And from this position of power, they nominally control democratic institutions. So, non-democrats are controlling democratic institutions – democracy isn't possible under such conditions!

Nevertheless, existing civil institutions in Afghanistan should be bolstered if possible. What does the latest Taliban attack on the city of Ghazni say about the organisation's strength?

Ruttig: The Taliban are basically stronger than ever. They control much more territory and a greater proportion of the population than they ever did before they were overthrown in 2001. The attack on Ghazni wasn't the first on a large city in Afghanistan this year and in previous years. We remember Kunduz in 2015, what we remember less is that in Kunduz in 2016, something similar happened as just now in Ghazni. The Taliban go in, control the city for a few days and go back out again. This shows that they still have initiative and that the Afghan armed forces, despite all the investment in training and in their finances, are not in a position to take the initiative. They are basically inefficiently organised and still too weak. Too weak in all respects apart from number, after all we're talking about more than 350,000 people. 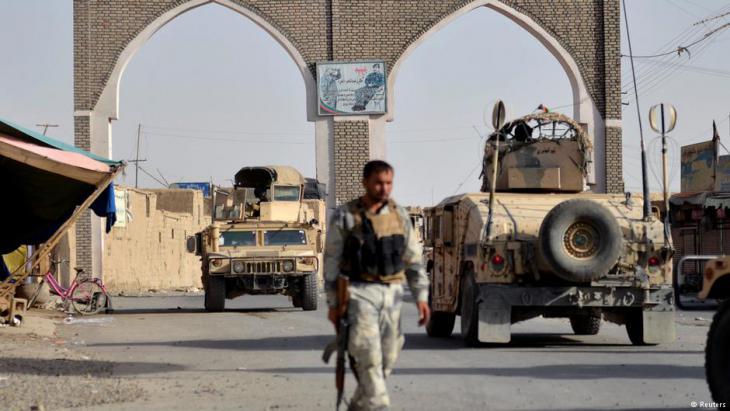 Hope for a lasting peace: in early August, the Taliban occupied the city of Ghazni east of Kabul for over five days. More than 300 people were killed and hundreds injured in the fighting. Only a short time later, a horrific terrorist attack on a school in Kabul shook the country: some 50 young people were killed in the attack. Afghan government troops only managed to recapture the city on 12 August

That covers the military might. But what about the Taliban's diplomatic strength? Is a solution taking shape through negotiations?

Ruttig: The attack on the city of Ghazni – and the Taliban officially announced it as such – was a demonstration of power. They said the attack had been motivated by an American statement that they intended to carry out military strikes on Taliban targets ahead of talks. Now, the Taliban have hit back. This is a real disaster, as much for the Americans as for the Afghan government, of course. But nevertheless, it doesn't mean – as cynical as it may sound, particularly for the people affected by this fighting – that there cannot be and will not be any talks.

These are the usual demonstrations of force ahead of negotiations. We've had two rounds of preliminary talks, in Qatar and in Uzbekistan. It's been announced that the Americans and the Taliban plan to meet again in a month's time in Uzbekistan. There seems to be something in the pipeline. The main problem for the Afghan government is that so far they've been left out and, as a result, don't have a very favourable view of the whole process.

But the Americans have repeatedly and publicly explained that one of the goals of these talks is that at a certain point, the Afghan government must take part. And they have to get involved, because of course they're also a party in this conflict. Thus far, the Taliban have rejected the idea. They say they want to talk to the Americans to set out a timetable for the troop pull-out and once that's happened, they'll also be ready to talk to the Afghan government. I think that's not a bad timetable when you see the extent of the bloodshed in Afghanistan.

How might a future arrangement with significant Taliban participation look? For example, can it be assumed that achievements such as education for women and girls could still continue? 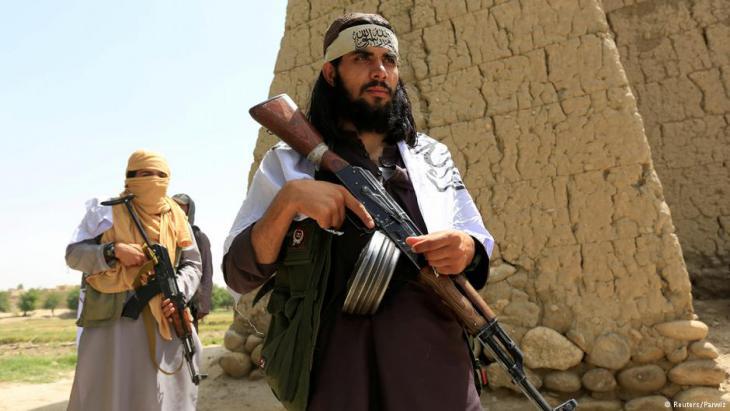 IS a fringe group on the military battlefield in Afghanistan: "it's the Taliban that count and they also don't have a positive view of IS, in fact they actively fight against the movement, specifically in the areas where it appears. There was a major Taliban offensive last May in a province in the northwest of the country, where the only IS group that didn’t operate close to the Pakistani border was active. The Taliban have practically eliminated this group," says Thomas Ruttig

Ruttig: It will be a tough battle, of course, to maintain these achievements. That's why the Afghan government also needs a strong moral position. In view of the war criminals in their ranks, they're in no position to say to the Taliban what's acceptable and what's not. There are many people on the government side who completely reject girls' education or women in the media. It'll be a hard struggle, one in which it's not clear whether the Afghan government can be relied on.

On the other hand, the Taliban have modified their policies since they exercised their power. There are voices in the movement that say: yes, girls should also go to school. But of course in practice, the Taliban are still prescribing conditions that don't correspond to our ideas. What we need to do now is to find out whether these conditions match the ideas of most Afghans, if for example they say that girls should only be schooled up to the 6th grade. Then we have to find ways to ensure that even with the Taliban, girls can also access higher education. After all, we know that Taliban leaders send their daughters to university abroad.

Educational establishments are targeted primarily by the IS offshoot in Afghanistan, aimed at claiming the highest possible number of victims, as in the case of a recent repeat attack in a Shia neighbourhood of Kabul. Does the IS now pose a greater threat to Afghanistan than the Taliban?

Ruttig: No, the threat from IS is nowhere near as big as that posed by the Taliban. There's a disproportionate level of reporting on IS terror attacks, for example the one on the education centre in Kabul. But on the actual battle field, the IS is just a fringe group. It's the Taliban that count and they also don't have a positive view of IS, in fact they actively fight against the movement, specifically in the areas where it appears. There was a major Taliban offensive last May in a province in the northwest of the country, where the only IS group that didn’t operate close to the Pakistani border was active. The Taliban have practically eliminated this group.

The IS offshoot in Afghanistan is trying – just as in Syria and Iraq – to provoke armed conflict between Shias and Sunnis. Luckily it hasn't succeeded so far, because IS doesn't have a footing in the country. With all the tensions that sometimes crop up between Shias and Sunnis in Afghanistan, these are generally theoretical in nature and don't result in people taking up arms. And despite the terrible attack with more than 30 deaths on the girls and boys preparing for university entrance exams in Kabul, one shouldn't forget: most of the civilian victims in Afghanistan are still blamed on the Taliban, even if these deaths are (no longer) caused by direct attacks on civilian targets.

Elke Muller is fighting for her daughter Anna, who fell in love with a young Afghan and converted to Islam. The mother spoke to Esther Felden about feeling alienated and her fear ... END_OF_DOCUMENT_TOKEN_TO_BE_REPLACED

Despite ongoing peace negotiations between the United States and the Taliban, the bloody conflict in Afghanistan continues to take a heavy toll on the country’s people. Can talks ... END_OF_DOCUMENT_TOKEN_TO_BE_REPLACED

Within eyeshot of the Bosnian-Croatian border, thousands of refugees are camping in squalor on a former garbage site. Their supplies are scarce. ... END_OF_DOCUMENT_TOKEN_TO_BE_REPLACED

Under the tutelage of Pakistan's military, the Taliban brought peace to Afghanistan the last time it ruled the country. But it was the peace of the graveyard, which it could ... END_OF_DOCUMENT_TOKEN_TO_BE_REPLACED

In "What We Left Unfinished", Afghan-Lebanese-American filmmaker Mariam Ghani discusses the forgotten era of Afghan Communism and its ties to arts, culture and propaganda. ... END_OF_DOCUMENT_TOKEN_TO_BE_REPLACED

Threatened with death by the Taliban, director Hassan Fazili fled to Europe with his family, filming their odyssey on his mobile phone. Itʹs not the first time that the refugee ... END_OF_DOCUMENT_TOKEN_TO_BE_REPLACED
Author:
Hans Spross
Date:
Mail:
Send via mail