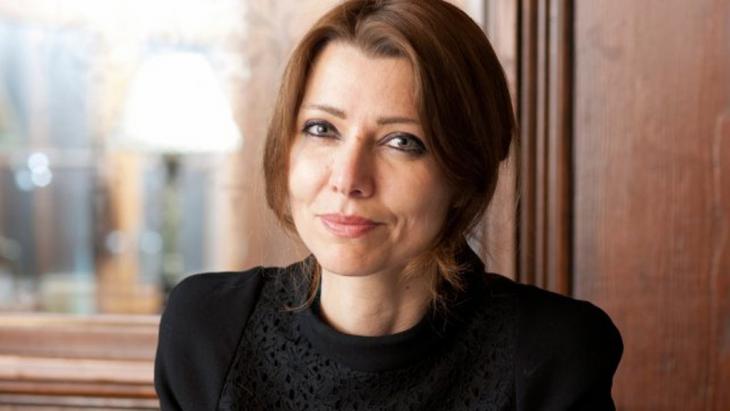 In interview with Sabine Peschel, best-selling Turkish author Elif Shafak warns against the disintegration of democratic values and the rise of authoritarianism in Turkey and across Europe

In 2008, when Turkey was guest of honour at the Frankfurt Book Fair, you were the star of the delegation. Do you sense a difference in the atmosphere today?

Elif Shafak: Yes, I do. Back then in 2008 there was considerably more optimism about Turkey's democracy, even though there still some major obstacles to be ovecome. I think we have been sliding backwards, gradually at first and then at an everincreasing rate. Today Turkish writers, poets, journalists and intellectuals are very demoralised. The mood has changed hugely – for the worse.

Shafak: I have revealed my opinion on this very important subject through my writing over the years. I have given interviews, written articles, spoken out in public and I have also written a novel, "The Bastard of Istanbul", for which I was put on trial. Because I used the word genocide and because of the critical tone I adopted in that book, I was accused of "insulting Turkishness." I was finally acquitted, but for two years I had to live with bodyguards.

It is a subject that I have felt strongly about as a writer. My approach however has always been constructive. I want there to be peace and harmony between Armenians and Turks; I want the future to be better than the past. I think for that Turkish intellectuals in particular have a responsibility. Turkey is a society of collective amnesia. Memory is a responsibility. We need to talk about both the beauties and the atrocities of the past. Not in order to create more sadness or revenge, but to share peoples' grief in a very humane way. If we Turks can remember, Armenians can forget a little bit. 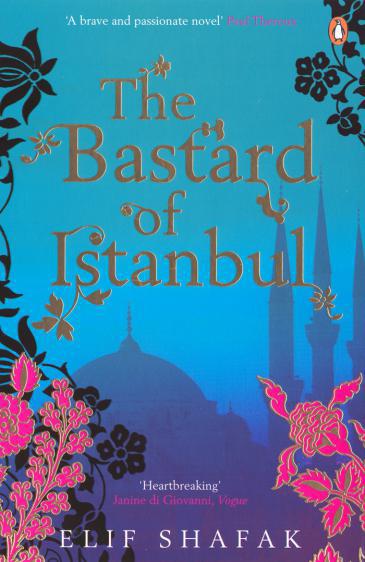 Crossing a red line: in her acclaimed novel "The Bastard of Istanbul", Elif Shafak addressed a topic which remains absolutely taboo in Turkey: the historical reappraisal of the Armenian genocide in 1915. Her critical stance earned her notoriety and a court case brought by nationalists for allegedly "insulting Turkishness". She was eventually acquitted

In English, the title of your latest novel is "Three Daughters of Eve." The German title is very different, "Der Geruch des Paradieses" (The Scent of Paradise). Did you choose the title yourself? The novel reads like a poetic discussion of Western democratic ideas and Eastern cultural Islam. Do you still have hopes that they could peacefully and successfully coexist in Turkey?

Shafak: I think it is perfectly possible for a person to be a Muslim and at the same time a democrat. Like it is perfectly possible to be a Christian or a Jew and a democrat. And it is also possible for a country with a Muslim majority to adopt democracy – a pluralistic democracy and liberal democratic values. But that requires work. It requires a sincere dedication to liberal democratic values. And in Turkey we haven't done this. Just the opposite – we are sliding backwards.

And that is such a shame, because what happens in Turkey has repercussions beyond its borders. I am sad, but I haven′t given up hope that countries with a Muslim majority can better their democracies and that different religious identities can live together in peace. It is possible!

Not long, only a few years ago, Turkey seemed optimistic about the future. Now the state of emergency in Turkey has been extended. What does that mean for writers?

Shafak: For many years now, our democracy has been on the decline and Turkish writers have written on the subject a lot. Turkey's democrats feel very lonely; sometimes we feel abandoned. Turkey is a very polarised and bitterly politicised country. The coup attempt this summer was horrific. It was very, very wrong. Now we are living through a purge and people who had nothing to do with the coup are accused of being involved. The crackdown, especially on journalists, writers and intellectuals has been very harsh. I have writer friends who are in prison right now.

Only a few years ago Turkey was regarded as a role model that could straddle Europe and the Middle East. This has changed completely. Is there still hope for Turkey and Europe?

Shafak: This is such an important issue. At some time around 2005 there was a golden moment. It seemed almost possible that Turkey was going to become an EU member. And the support inside Turkey for EU membership was around 82 percent. It was amazing – the newspapers, the enthusiasm. It didn't work out. I criticise the Turkish government for failing to fulfil EU criteria. But I also at the same time criticise populist politicians in Europe for pushing Turkey away. This was the case in France, in particular. And what has happened since 2005? Turkey has become increasingly isolated, increasingly enclosed, increasingly authoritarian. Did this help Europe? No. Did this help Turkey's democrats? No. Did this help the region? No. So in the long run, it would be much better if Turkey were to align itself to European core values of liberal pluralistic democracy. Turkey must be encouraged in its EU dialogue. 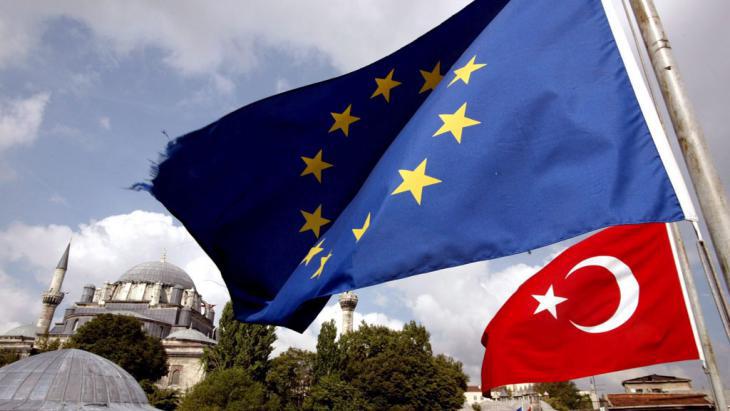 Feigned trust: "some time around 2005 there was a golden moment. It seemed almost possible that Turkey was going to become an EU member. And the support inside Turkey for EU membership was around 82 percent. It was amazing – the newspapers, the enthusiasm. It didn't work out. I criticise the Turkish government for failing to fulfil EU criteria. But I also at the same time criticise populist politicians in Europe for pushing Turkey away. This was the case in France, in particular. And what has happened since 2005? Turkey has become increasingly isolated, increasingly enclosed, increasingly authoritarian. Did this help Europe? No. Did this help Turkey's democrats? No"

We can criticise the government and at the same time encourage the people. I know it's not very realistic right now to talk about EU membership, but we need to keep the hope alive. Otherwise, Turkish nationalists/isolationists will tell young Turkish people, "Look, Europe doesn't care about us, let's turn towards Russia or Pakistan or Saudi Arabia."

There are currently strong populist tendencies in Germany, in Hungary and in Poland. Can you understand those who support these populist leaders?

Shafak: As writers one of our main issues is empathy. I have to be able to understand why an ordinary, good-hearted, anxious middle-class American or German or Polish citizen will vote for the far right. I have to understand that. If we cannot understand that, we will lose these people. We need to engage in conversation with them. Many people have anxieties about the future. Some people have fear – of immigrants, of Islam, of "the other". This is understandable. What is dangerous is when fear guides politics. History is full of examples of this. So let's understand the fear, but not allow the fear to dominate. And for that we have to come up with a better, more radically humanistic narrative that tells people it's okay to have concerns. Let's talk about our fears, but find a better solution.

For me diversity is very important. Cosmopolitanism is very important. I am worried about the rise of populism, xenophobia, tribalism and I'm also worried about a new trend of illiberal democracies, of which Turkey is a part. These are democracies that are more authoritarian in their essence. Hungary, Poland, Turkey – one country after another is taking this path. We have to talk about illiberal democracies and their dangers.

In Turkey, your novel is at the top of the bestseller lists. Who reads your novels?

Shafak: My readers are so diverse. This has always been the case. I have published 15 books in Turkey. Ten of these are novels. And with each book my readership expanded and become more and more diverse. And this is interesting because Turkey is a very polarised country. People don't share many things together. Art and literature are an important bridge.

There are lots of women from very different backgrounds who read my books: Turks, Kurds, Armenian, Jewish, Alevi women. Culturally and ideologically they come from different backgrounds. So there are feminists, liberals, leftists. But I also have many conservative readers with headscarves, and the fact that people who don't talk to each other are reading the same book is important to me.

Elif Shafak, born in Strasbourg in 1971, is one of Turkey′s leading female authors and enjoys a global following. She holds a doctorate in political philosophy, has lectured in gender studies at the University of Arizona and is these days based in London as a writer and columnist. Her books have been translated into more than 40 languages. Her latest book "The Architect′s Apprentice" is published by Penguin Books.

Home
Print
Newsletter
More on this topic
Interview with Elif Shafak: "There is a lack of democratic culture in Turkey"Book Preview: Elif Shafak's "Black Milk": On writing, motherhood and the harem withinElif Shafak: "The Bastard of Istanbul": A reproach for the historical amnesia
Related Topics
Armenians, Democracy and civil society, Elif Safak, Literature, Media in Turkey, Minorities in the Muslim world, Recep Tayyip Erdogan, Right-wing populism, Turkey and the EU, Turkish literature, Turkish opposition
All Topics

Education for girls and women is still possible in Afghanistan, says Reinhard Eroes of the Kinderhilfe Afghanistan initiative. In interview with Elisa Rheinheimer, he talks about ... END_OF_DOCUMENT_TOKEN_TO_BE_REPLACED

Locals in the Middle East have said European critics are showing bias and hypocrisy when they condemn Qatar. Observers agree that Qatar has had to deal with more criticism than ... END_OF_DOCUMENT_TOKEN_TO_BE_REPLACED

In Doha, Arabs from Morocco, Tunisia, Egypt and Algeria are gathering to celebrate the first ever FIFA World Cup to be held on Arab soil. The criticism from Europe? Over the top, ... END_OF_DOCUMENT_TOKEN_TO_BE_REPLACED

Canan Topcu came from Turkey to Germany as a child. In her essay, she describes how bothered she was by the racism she encountered in her country of origin when she travelled ... END_OF_DOCUMENT_TOKEN_TO_BE_REPLACED

All organisers use major sporting events like this year’s FIFA World Cup in Qatar primarily to advertise their country and promote a slick public image. This is not something we ... END_OF_DOCUMENT_TOKEN_TO_BE_REPLACED
Author:
Sabine Peschel
Date:
Mail:
Send via mail

END_OF_DOCUMENT_TOKEN_TO_BE_REPLACED
Social media
and networks
Subscribe to our
newsletter