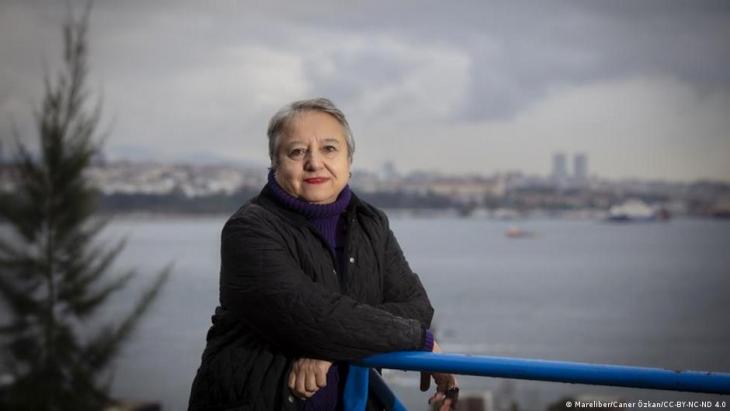 As 1 July approaches, the date when Turkey will officially pull out of the Istanbul Convention on violence against women, Qantara.de speaks to Canan Arin, one of the co-founders and most well-known voices of the Turkish feminist movement. Interview by Ceyda Nurtsch

You say you grew up under the illusion that men and women were equals. What did the reality for women look like at the start of your career?

Canan Arin: I grew up in a household devoid of discrimination and unequal treatment. When I began engaging with the feminist movement in the 1980s, we organised events highlighting the reality of the situation for women. It was here that I realised that discrimination against women was grounded in law, in civil and criminal law. The civil code states that "the head of the married unit is the husband". This means that marriage sees women become part of an institution or organisation. They are no longer individuals. They become second-class citizens.

The situation in Turkish criminal law was particularly dire. Women’s bodies were essentially property, belonging first to the families into which they were born, before being transferred to their husbands when they married. If a woman was raped, it would be treated as a "crime against public morality and family order". But it has nothing to do with the family; it’s about my body, and my rights as a human being.

There was also a paragraph stating that if several people had raped a woman and one of them married her, and remained married to her for five years, the charges against him would be dropped. The justification for this was that the marriage reinstated the woman’s moral standing, since her purity would naturally have been sullied by the rape(s). Yet behind this lay the true aim of protecting the man from punishment. There were other issues such as adultery, virginity checks or so-called honour killings which made it very clear that men and women were not equal. 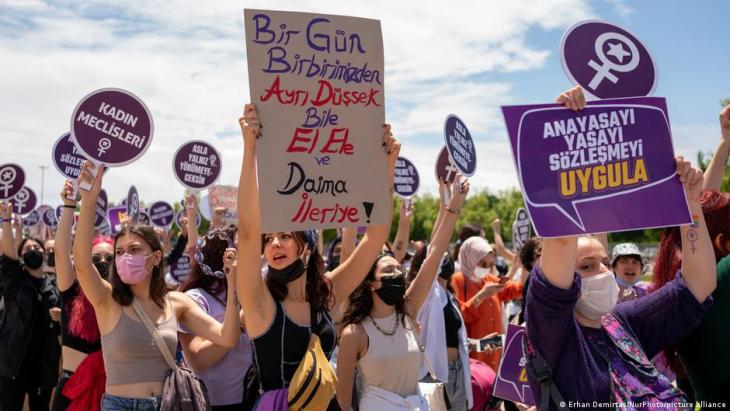 At the President's behest: by pulling out of the Istanbul Convention, Erdogan – whose popularity is flagging – is hoping to garner the conservative vote at the next presidential election. Yet even women in his own party, the AKP, have been outspoken in their opposition. Veteran human rights lawyer Canan Arin argues that the European Council should revise the terms of withdrawal because, legally, you can only withdraw from a contract under the conditions in which you joined. "There are claims that it disturbs the sacred order of the family. But what should that be? A system in which women are slaves, forced to endure all kinds of violence, with no chance of speaking out?" says Arin

You played an important role in ensuring that the laws were changed. How did that come about?

Arin: At the time, there was a sense that a new wind was blowing across the country. The government had hopes of joining the EU – or it wanted to show off its friendlier side, with a view to getting more votes. Changes were made to civil law in 2002 and criminal law in 2005 as the result of great efforts on the part of women generally. Now, civil law states that men and women are equal. Even if we didn’t manage to push through all of our demands, sexual offences are now treated under the umbrella of "sexual inviolability". The state has therefore accepted that a right to sexual inviolability exists, both for women and for men.

You co-founded the first women’s refuge organisation, Mor Cati ('Purple Roof') and Ka-Der, a foundation which supports female candidates in political office. What was the idea behind them?

Arin: At the time, there was this prevailing image of feminists as ugly women who couldn’t find themselves a man. And that all violent men were uneducated and poor. As part of our campaign, we asked women to share their experiences with us. And we saw that doctors hit their wives too, and women with a high level of education were also subject to violence. And that feminists aren’t necessarily ugly old spinsters. We published our findings in our book Shout So Everyone Can Hear.

With Mor Cati we wanted to create a space where women could live free of violence. In developing it, we visited women’s refuges in Germany and Switzerland. In 1995, once we had enough money, we opened our women’s refuge. Since then we have supported the women staying there to stand on their own two feet, to be individuals. We founded Ka-Der, the foundation which supports female political candidates, in 1997, in order to boost the number of women in political office.

The Turkish government has declared that, on the first of July, it will be pulling out of the Istanbul Convention, the Council of Europe’s treaty on preventing and combatting violence against women and domestic violence. What do you make of this?

Arin: Turkey is pulling out of the convention at the request of a single man, Recep Tayyip Erdogan. What’s behind this, however, is the chance of garnering votes from people who share the mentality as the Taliban and IS. Because even women in the ranks of the AKP were opposed to the withdrawal. The European Council should revise the terms of withdrawal because, legally, you can only withdraw from a contract under the conditions in which you joined. 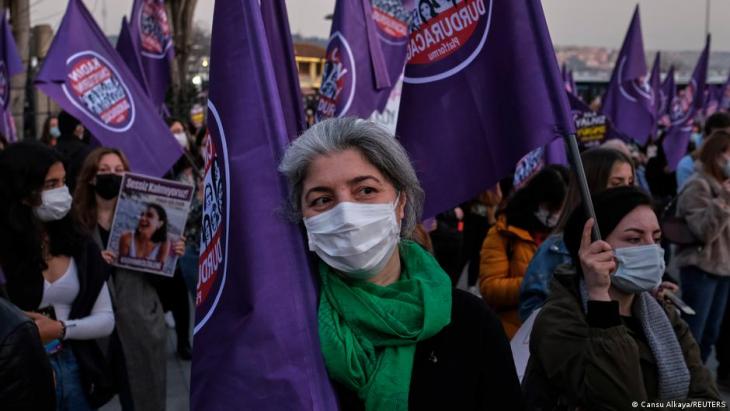 Canan Arin: "The women’s movement has been the best source of opposition in Turkey for years. It’s a world with an unblinkered view of things. They dance, sing and paint, and when they need to, they fight. They defend their rights by any means, they resist. They’re capable of something as awe-inspiring as bearing children, and something even more impressive: raising those children. And yet they are met with injustice at every turn. That’s why I’m on their side"

However, the European Council has clearly decided, "Well, as long as they’re not sending us their refugees, we’re not bothered what goes on inside the country". But it can’t work that way if they are genuinely serious about human rights, and the Istanbul Convention is a human rights treaty. There are claims that it disturbs the sacred order of the family. But what should that be? A system in which women are slaves, forced to endure all kinds of violence, with no chance of speaking out? Several women are killed every day in Turkey. But the state is pulling out, because there’s no law or justice in this country anymore.

What consequences could it have for women in Turkey?

Arin: Since it’s an international treaty, we were always able to refer to it in our cases. And there are still the decrees on which the convention is based. But they’ve abandoned them, just like they’ve abandoned all semblance of civil law.

You see it in many areas of life. For example, abortion is legal until ten weeks, but the government has declared that it contradicts religious rules. We carried out a survey of 37 state hospitals and only three stated that they performed abortions, even though it’s not illegal. A year later, it was just two. Women who can afford it go to private clinics, and the others have it done illegally, putting their health, and even their lives, on the line.

The door’s also been left wide open for child abuse. Today, women are no longer fighting to get their rights, they’re fighting to keep them, because this government is making great strides towards Sharia law. In the past, we had a ministry which was explicitly responsible for the interests of women. Today it’s called the "Ministry for Families and Social Policy". The pressure exerted on women is ever increasing, and it will only continue.

You claim that the women’s movement is the biggest source of opposition. Does that give you strength when it comes to doing your work?

Arin: The women’s movement has been the best source of opposition in Turkey for years, as is the case in Latin America and many other countries. I’ve been unable to tolerate injustice for as long as I can remember. That’s why I decided to study law. I was also interested in Turkish language and literature, philosophy and sociology, but I thought that a good lawyer might as well be well versed in these areas. When I joined the women’s movement, I got to know the colourful world of women. It’s a world with an unblinkered view of things. They dance, sing and paint, and when they need to, they fight. They defend their rights by any means, they resist. They’re capable of something as awe-inspiring as bearing children, and something even more impressive: raising those children. And yet they are met with injustice at every turn. That’s why I’m on their side.

How do you see the future of the women’s movement?

Arin: Pessimism would stand in great contradiction to my work. We are currently experiencing a step backwards in women’s rights and democracy worldwide. Women are still going to have to fight hard to protect the rights that they do have. On days like International Women’s Day and 25 November (International Day for the Elimination of Violence against Women), more and more young women are taking their places alongside us white-haired old women. They can see that their rights are in danger. That’s why I’m pinning my hopes on the women of Turkey.

Turkish lawyer and women’s rights activist Canan Arın was born in Ankara in 1942 and was a co-initiator of the Turkish women’s movement in the 1980s. She is co-founder of Mor Cati (Purple Roof), the first independent women’s refuge foundation in Turkey, and Ka-Der, an NGO which supports female candidates in political office. In March 2021, she was awarded the Anne Klein Women’s Prize by the Heinrich Boll Foundation.

Relations between Turkey and Russia are ambivalent. Moscow is nonetheless trying to prop up the leadership in Ankara. Elections are to be held in Turkey in June – and the last ... END_OF_DOCUMENT_TOKEN_TO_BE_REPLACED

All eyes in Turkey are on a court hearing scheduled for January 30 into a child abuse case that allegedly occurred with the knowledge of one of Istanbul's most powerful Islamic ... END_OF_DOCUMENT_TOKEN_TO_BE_REPLACED

Any reconciliation between Turkey and Syria’s Assad regime would have disastrous consequences for many Syrians, explains Syria expert Kristin Helberg END_OF_DOCUMENT_TOKEN_TO_BE_REPLACED

The poetry of Pir Sultan once prompted uprisings in the Ottoman Empire. To this day, Alevis identify with him. Rainer Hermann visited Mehmet Celebi, a direct descendant of the ... END_OF_DOCUMENT_TOKEN_TO_BE_REPLACED

There are signs of an imminent normalisation of relations between Turkey and Syria. This would allow Erdogan to score political points domestically before the upcoming elections ... END_OF_DOCUMENT_TOKEN_TO_BE_REPLACED

Turkey will mark the centenary of the proclamation of the Turkish republic in October. But 2023 will be an important year in another respect too: Turks will go to the polls in ... END_OF_DOCUMENT_TOKEN_TO_BE_REPLACED
Author:
Ceyda Nurtsch
Date:
Mail:
Send via mail

END_OF_DOCUMENT_TOKEN_TO_BE_REPLACED
Social media
and networks
Subscribe to our
newsletter