"Algeria is a Thoroughly Corrupt Country"

Do the violent protests in Algeria pose a serious threat to the government of Abdelaziz Bouteflika, as some political observers believe? Loay Mudhoon spoke to Algeria specialist Werner Ruf about the roots of the current unrest and the desperate economic state of the North African nation

Many Algerians have been protesting against the high price of food and fuel for several days now. What has triggered these angry demonstrations?

"The protests are taking on a dimension that could yet pose a threat to the regime," says Werner Ruf, Algeria specialist and former Professor of International Relations at the University of Kassel

​​Werner Ruf: I think it can be partly explained by what's happened in Tunisia. On the other hand, these protests have been going on in Algeria for years, and continue to flare up often for quite trivial reasons – a soccer match, for example, or a traffic accident, or a youngster tortured to death at a police station. But it's also true that the social situation in Algeria has continued to worsen.

Food prices have gone through the roof again in recent weeks, and this hits people hard, of course. And when most Algerians live in hardship, with no work and no chance of living a half-way decent life, then it hits them even harder.

The question is, what is Algeria's ruling elite doing with the high revenues from the oil and gas industry? Algeria has seen an unprecedented economic boom in recent years.

Ruf: Algeria hasn't seen an economic boom, but a boom in revenues. According to current estimates, Algeria generated revenues of around US$56 to 57 billion in 2010, from gas and oil exports alone. But none of this is trickling down to the people.

Viewed from a different perspective, it's clear that this rentier economy – i.e. living off income derived from unproductive products such as oil and natural gas – has a negative effect on the country's economy because of a belief that everything can be imported. And it's really fascinating to see that in contrast to these increasing, inflated national revenues, tax revenue is actually in free fall. There are practically no tax revenues, because there's no domestic economic activity. 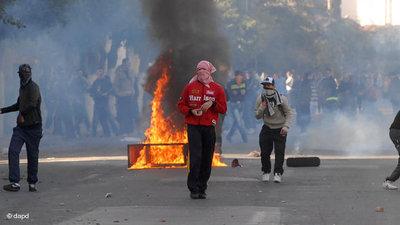 Protests against unemployment and high living costs: young people have clashed with police in the capital Algiers and many other cities; three people were killed, hundreds injured and more than a thousand detained last weekend alone

​​Why is there no investment in infrastructure, for example, or in other economic sectors, to reduce this export dependence?

Ruf: That's actually a very simple and logical question. And although the response may not be so simple, it's just as plausible: Algeria is a thoroughly corrupt country. The ruling elite lines its pockets with these huge revenues or buys vast amounts of unproductive goods such as armaments. For example, Algeria concluded a contract worth US$23 billion with Russia two years ago.

Contracts like these, secured in this case by the pro-Russian clan within the Algerian leadership, involve huge commission payouts that are worth at least the declared value of the deal. This particular arms deal, which triggered vociferous protest from the US, included a number of fighter jets that Algiers returned to Moscow citing quality concerns. Then Algiers struck another arms deal with Washington, and more commissions were paid out. It's monstrous. And now the Algerian Energy Minister, Chakib Khelil, has at last been sacked. The entire Algerian oil company Sonatrach, which is incidentally the 10th largest in the world, is thoroughly corrupt.

Could these popular protests expand and pose a serious threat to the stability of the regime?

Rich nation, poor population: the young are the driving force beind this protest movement against Bouteflika's policies and the social plight of the nation

​​Ruf: There are some who are speculatung that the events of October 1988 could repeat themselves. Back then, there was a nationwide revolt against the prevailing situation. In my view, it's a possibility because at present demonstrations are taking place all over the country, not just in medium-sized towns and villages. The protest has now spread to Oran, the country's second largest city.

There was also unrest in Bab El-Oued, one of the large slums in the capital Algiers. The protests are assuming dimensions that could yet pose a threat to the regime. The situation is also being stoked by events in Tunisia. The Algerians, who have had to put up with a prolonged period of violence, are saying to themselves that if something like this can happen in the "well-behaved police state" of Tunisia, then we can certainly do the same. A further consideration is that in Algeria, the gap between rich and poor is much more extreme than in Tunisia.

Is there anything the European Union can do to influence the situation?

Ruf: I think the EU would like to see calm being restored to Algeria. On the other hand, the EU is not blameless with regard to circumstances in North Africa. That goes above all for Tunisia: the Euro-Mediterranean Association Agreements have completely destroyed Tunisia's small and medium-sized industry, just as it was finding its feet. These countries can't hold out against the cheap industrial goods imported from the EU. They can't build up their own industries, because despite lower wages, products would not be cheaper than the industrially mass-produced goods from the EU; that's the problem.

It's much more extreme in Tunisia than in Algeria, where there's no domestic market anyway and a total reliance on imports. For example, the price of wheat for bread production has risen sharply over the last few years, and in particular over the last few months, to such an extent that even these huge revenues – once you've deducted the sums that the rulers are putting in their own pockets – are no longer enough to provide people with the basics.

Werner Ruf is a political scientist and peace researcher and was Professor of International Relations at the University of Kassel until 2003.

Algeria's Petrodollars
Full Coffers, Poor Population
Although the Algerian state has profited hugely from the oil boom, poverty levels in the country are rising. More and more people in Algeria are starting to wonder where the petrodollars actually go. Youssef Boufidjelin and Hassan Znined report

Terrorist Attacks in Algeria
El Dorado for Western Security Companies
The terrorist organisation al-Qaeda in the Islamic Maghreb has conducted a number of attacks in recent weeks, consciously targeting foreigners in the process. In view of the increase in western economic activity in Algeria, security companies already sense that they are on to something good. Bernard Schmid reports