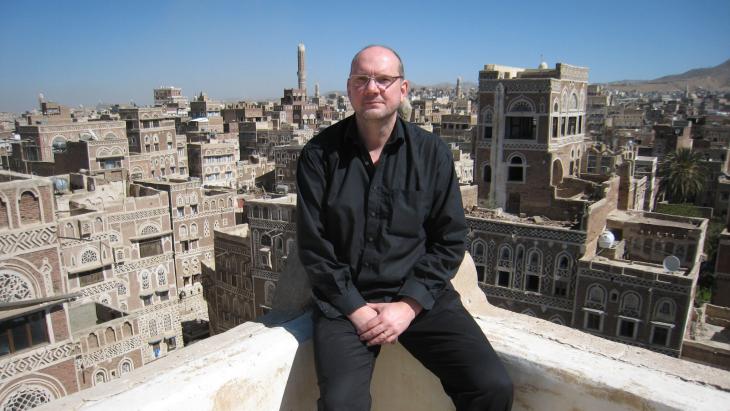 Since 2015, war has been raging in Yemen – a country about which people in Europe know astonishingly little. Cologne-based writer Guy Helminger visited Yemen in 2009, six years before hostilities began. He describes his experience in his book "Die Lehmbauten des Lichts" (Clay buildings of light). Interview by Gerrit Wustmann

You say that Sanaa is the most beautiful city you have ever visited ...

Guy Helminger: There is something intoxicating about walking the streets of Sanaa, surrounded by its architecture, seeing the life in this city, which has a touch of the archaic about it. And for a fleeting moment, I thought that I had found happiness – as kitsch as that may sound. There were the old buildings with their stucco, the smells, the people ... my heart swelled with joy. I was taking photographs all the time, and when I looked at them later, all I could see was houses, a corner of a market, but no joy.

And if you take too many photographs, you might just find yourself face to face with agents of the secret police ...

Helminger: Indeed! It was quite surreal! I don't just take photos to have nice souvenirs for later, I need them to remember all the finer details. And suddenly I realised I was being followed. I thought they wanted to kidnap me, but it was actually the secret police. Thankfully, it all ended well. 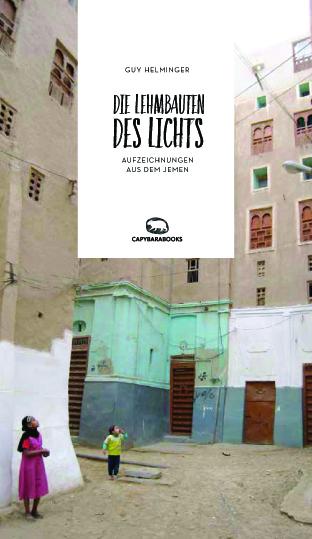 Now merely distant memories: Yemen is dying. The country and the most beautiful city the author Guy Helminger has ever seen in his life, Sanaa, have been wracked by conflict for years

To what extent were the people you met there responsible for the profound impression the city made on you?

Helminger: To a great extent. Why would I want to go to a city without people? Sure, the architecture is beautiful. I'm have just got back from Brasilia. It's phenomenal, but it's a city that was built for the powers that be, not for the people. I could never be happy there. The people in Sanaa not only played a major role in shaping my impression because they welcomed me, but because Yemen gave me the chance to smash an incredible amount of prejudices. People always said to me: don't do this, you can't do that, that's breaking the rules, etc. I just went there, and the people quite simply approached me, which is logical. Perhaps it is not about being part of the whole, but about not staying an outsider.

An imam asked you what he and his compatriots could do to counter the prejudice they and their religion face. You replied, "nothing". Is there anything we in Europe can do to counter such prejudice?

Helminger: I think we should never stop questioning things. Just because something is foreign, doesn't mean it’s automatically good. However, encountering others creates an interculturality that allows us to judge things in a more nuanced manner. It's all about opening your mind to things, being willing to talk to people. The people in Yemen were open to me; they were interested in talking to people from a different culture. I'm talking here about the people in the markets, on the streets; not the intellectuals. Indeed, many of the intellectuals were very inflexible in their opinions.

You write that in Germany, it would be unthinkable for people to be so entirely open to someone who is here for a visit. Why is that?

Helminger: I think it has a lot to do with tradition. In Yemen, it's normal to just invite people you don't know in for tea. You meet, you chat a little, and you want to talk some more. That doesn't happen here. Most people are just happy to make a getaway after exchanging a few words. In Germany, I see a major lack of interest in anything that isn't to do with 'me'. It's such a pity. We insist on a high level of individualisation, on being able to cut ourselves off, on being able to withdraw. That has its pros and cons. People shouldn't forget that it's sometimes very good to open up to others, to approach them, to learn. In Yemen, the culture of meeting and encountering others is much more open. If someone invites you to tea, they do so without a hidden agenda. They don't want to sell you something; they just want to get to know you.

This contrasts sharply with the media reports about Yemen at the time, most of which were about kidnappings ...

Helminger: Around about the time I arrived, a woman who was working for a development agency had just been abducted. It was a permanent theme at the time. But people knew that these kidnappings did not have an ideological motive; it was all about using hostages to blackmail the government to repair the streets in a particular tribe's territory or to build schools. That kind of thing. That doesn't make it all right, but it meant I wasn't afraid of being kidnapped and beheaded by al-Qaida. It didn't prevent me from visiting tribal territories. But even then, I wasn't able to go to a lot of other places. The regions in the North, which were controlled by the Houthis, were completely out of bounds. 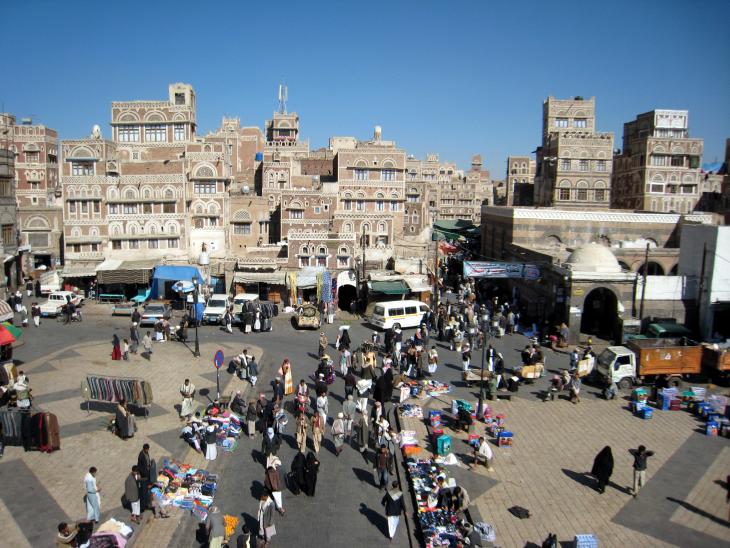 The fascination of Sanaa: "there is something intoxicating about walking the streets of Sanaa, surrounded by its architecture, seeing the life in this city, which has a touch of the archaic about it," writes Helminger. "For a fleeting moment, I thought that I had found happiness – as kitsch as that may sound. There were the old buildings with their stucco, the smells, the people ... my heart simply swelled with joy"

And yet Yemen was long considered a model democracy ...

Helminger: Well, things are always painted in rosy hues whenever the West needs allies. The Yemeni president at the time, Ali Abdullah Saleh, had been in power for over 30 years. There was no press freedom. Even people from Amnesty International confirmed to me that there were a lot of problems in the country.

What subjects were the authors you met there working on?

Helminger: While I was there, the Israeli government was in the middle of Operation Cast Lead, which targeted the Palestinians. The Yemenis took to the streets, demonstrating their support for their Palestinian brothers. This lead to a really abstruse situation: the Yemeni Association of Writers said that no intellectual would meet me because German intellectuals had not distanced themselves sufficiently from Israeli policy. Ultimately, however, individual writers made up their own minds and I ended up meeting many of them. They were working under difficult conditions. On the one hand, because of censorship, and on the other, because there were no distribution channels. In most cases, the censorship was not imposed by the state, but by religious authorities, who whipped up their supporters against the writers until they withdrew their works. This meant that no one could accuse the government of censorship. But it goes without saying that they were all working together.

War has been raging in Yemen for years now. Have you been able to stay in touch with people there?

Helminger: Hardly at all. I do know, however, that many of the people I met there have since fled the country. Some left even before the war started. Of course I follow what is happening. But the situation there certainly can't be explained with simple phrases like 'proxy war', which so regularly crops up in reports on Yemen. People are still fighting about things that happened in the past; North and South were separate; there are new groups that are only interested in safeguarding their own power; there are people who change sides; ex-President Saleh worked with the Houthis, who had previously been his enemy; there is IS, there is al-Qaida. No one can say who is fighting for what, except that everyone is fighting to maintain their power. But that's it. They don't care about the country; they don't care about the people; all they want to do is make money.

Few Muslims have to date visited the Auschwitz-Birkenau concentration camp memorial site. Now high-ranking representatives of Muslims and Jews are travelling together to the place ... END_OF_DOCUMENT_TOKEN_TO_BE_REPLACED

The terror attacks in Paris, Brussels and Berlin were all carried out by men radicalised in jail. In Germany, politics and the judiciary are trying out new approaches to prevent ... END_OF_DOCUMENT_TOKEN_TO_BE_REPLACED

Elke Muller is fighting for her daughter Anna, who fell in love with a young Afghan and converted to Islam. The mother spoke to Esther Felden about feeling alienated and her fear ... END_OF_DOCUMENT_TOKEN_TO_BE_REPLACED

As historian Wiiliam Dalrymple writes in his essay, scholars are only now beginning to realise the extent to which the Mughal emperors adopted what most would assume to be ... END_OF_DOCUMENT_TOKEN_TO_BE_REPLACED