No Freedom of Expression without Funds

In her interview with Amin Farzanefar, Yamina Bachir-Chouikh – director of "Rachida" – talks about her work as a filmmaker, the social perspectives of her country and about the importance of funding for freedom of expression. 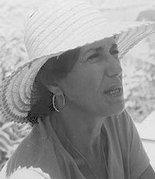 ​​"Rachida" is the directing debut of Yamina Bachir-Chouikh, born in 1954. The former film editor has contributed in one way or another to many of the outstanding films in Maghreb cinema. For example, she wrote the screenplay for "Omar Gatlato" (1976, Merzak Allouache), as well as for "Vent de Sable" (1982, Mohamed Lakhdar-Hamina), together with Abdelkader Lagta and her husband Mohammed Chouikh, one of the most prominent Algerian filmmakers.

You have worked on many Algerian films. Can you describe the historical stages of Algerian cinema?

Yamina Bachir-Chouikh: Algerian cinema was born during the liberation war. There were many different documentaries and foreign filmmakers such as Renee Gaultier/Voutier. After the war for independence was won, a cinema existed – even if it was state-controlled, as is the case in many socialist countries. Many films were produced, but all of them more or less had the same topic: the liberation war, the revolution, and so forth.

Later when the agrarian reform was carried out, topics changed from the liberation war to landownership, to the importance of land. But the state continued to treat filmmakers more or less as "employees" whose job was to reflect state policy in their films. Some directors tried to circumvent this state censorship, but even they had to make commissioned films in order to be able to make other films – which doesn't mean that no good films were created during this phase.

In the late 1980s and early 1990s a transition was made to a liberal, bourgeois system. But the transition ran hand in hand with an economic crisis, and of course the cinema was the first to suffer. You need money to make films. Earlier the state had acted as producer and had provided the money. When the state backed out, private production lacked the necessary experience. Many production companies closed down, and directors and technicians were left to fend for themselves.

Algeria's drama began during this economic crisis, that is, the violence started – against people engaged in the cultural sector as well. Only thanks to the courage of a few brave directors, who invested and risked everything they had to make films under these conditions, have any films been made at all since the 1980s. When the state took over, a funding system was gradually set up under the Minister of Cultural Affairs. A few films were made, but then funding ran out.

Algerian television, which is state-run, has mostly ignored cinema. Only in the past few years has television made a few efforts to support it. But even both sources together – state subsidies and television – are not enough to pay for film material, development, editing, sound, and so on. Financial funding mostly comes from Europe.

Would the state ever finance a critical film like "Rachida"? 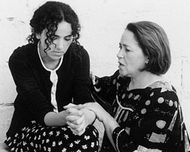 In "Rachida", a young teacher (Rachida) is shot by terrorists when she refuses to place a bomb in a school. Together with her mother she attempts to build a new life in the countryside. But traces of terrorism are everywhere – as is the will to survive.

​​Bachir-Chouikh: In fact, I did receive some state funding for my film. There is a committee which decides on funding. The jury had agreed, but the money still hadn't arrived when we started shooting the film.

So filmmakers rely on international co-productions. Doesn't that force one to make compromises?

Bachir-Chouikh: No, in my experience, not at all. I submitted the same film script in Algeria and abroad, and shot the film without any interference. I would never have accepted that.

So the desert the filmmaker has to walk through is not censorship, not Islamists, but mainly financial problems?

Bachir-Chouikh: Yes, it's the money! In Algeria there is no legal censorship. You can say and write what you want. Censorship takes place on an economic level. There is simply no money to propagate freedom of expression. That's why it's necessary to look elsewhere for money.

In the past few years some Algerian films have explored the problems of the middle class, of intellectuals and journalists who have problems with Islamists and exile. "Rachida," however, focuses on a simple teacher. What is the film about?

Bachir-Chouikh: I started with a real incident in which the woman did not survive. I wanted to give her a chance to tell her story, a chance to live on. I also wanted to tell another story, one about simple people.

​​When well-known journalists or intellectuals are murdered, their name appears in the newspaper – at least that! But every day ten to fifteen people die, whom nobody knows. I wanted to bring these people out of their anonymity, and their death, their murder, which nobody else is aware of. I wanted to give them a face, in order to tell the story that we have all experienced.

Is that also the reason why you chose a very simple, clear, and personal style – although you have worked on many films that are very "formalist" or theatrical?

Bachir-Chouikh: We all have our own way to deal with pain and loss, and if I have a personal predisposition, then it was to reproduce this woman's viewpoint. I wanted to show in a very simple manner how my society functions and vibrates – with its colors, its poetry, but also its negative sides, the horror.

It seems that this terror is felt in many other, smaller problems that we don't perceive.

Bachir-Chouikh: Exactly! It goes deeper than what we see on the surface. Not every Algerian has experienced terrorism. It hasn't affected the whole country or its whole history. I'm interested in how people in their normal, everyday environment – even children – are suddenly confronted with violence and how they perhaps also choose violence. There are many possible forms of violence in society – against women, against children, and even between men – which then produces more violence.

Does the term "Islamist" mean anything to you?

Bachir-Chouikh: It's a term that has been totally inflated and hyped by the media. So nobody knows anymore what it is actually meant to express. Islam, Muslims, Islamists – everything has been thrown into one pot.

There is something I can relate to. My father was a devout Muslim. This is my social background, and this is what means something to me. I grew up in this culture – and it has wonderful qualities. It is a part of human history and has contributed much to this history.

But I am not a theologist, and one needs to know more to say something meaningful. Otherwise it remains a superficial label that many people use without exactly knowing what they really mean.

The perpetrators in your film are not the typical suspects: not the cliché-ridden, long-bearded men wearing turbans, but seemingly quite normal-looking young men…

Bachir-Chouikh: I deliberately chose not to use this cliché, that bearded, dirty, strange people blow things up. It is the youth next door.

Your first screenplay for the film "Omar Gatlato" deals with the many Algerian youth who hang around with nothing to do, with no future. Do you see the youth in the film "Rachida" in a similar situation? Is there a youth problem in Algeria?

Bachir-Chouikh: But of course! Algeria is a very young society, and we have created generations of hopelessness – by no means should this excuse or explain terrorism. But weapons are being placed in the hands of these youth. We have more or less created the conditions for them to be used as the trigger. But I believe that violence and terrorism stem from the feeling of injustice.

Then injustice in Algeria must be greater than in Egypt or in Morocco, because there is more violence in Algeria.

Bachir-Chouikh: One can't really say that. There is actually no difference. But the reaction always depends on the respective mentality of the people and their history. Algeria carries a specific historical burden – a history of resistance against injustice and a history of 130 years of colonialism – which is quite a lot.

People in Algeria have not lived under worse conditions than people in Egypt or in Morocco! Economically they have been better off. Nobody is starving on the streets. There is compulsory schooling, even health care is free. But this alone is not enough.

You made the film "Rachida" two years ago. Much has happened since then. If you were to look back now, have you become estranged from parts of "Rachida," or do you see the film from another perspective?

Bachir-Chouikh: Terrorism is no longer the same! Social conditions and everyday life have not changed, nor the mentality. But violence is no longer as omnipresent as I showed it in my film…

What do you hope for the future, for the people in the countryside whom you showed in your film as well as for people who live in the city, like Rachida?

Bachir-Chouikh: One can no longer hope that the future will be better. The present determines what will happen in the future.

That sounds a bit pessimistic.

Bachir-Chouikh: No, perhaps I am growing less passionate and angry as I get older – but I still have hope. Without hope I couldn't make films and wouldn't spend four years searching for money.

The situation will change, but it's not possible to change problems which have developed over centuries within three or four years. It needs time. To change the future, the mentality in the present has to change.