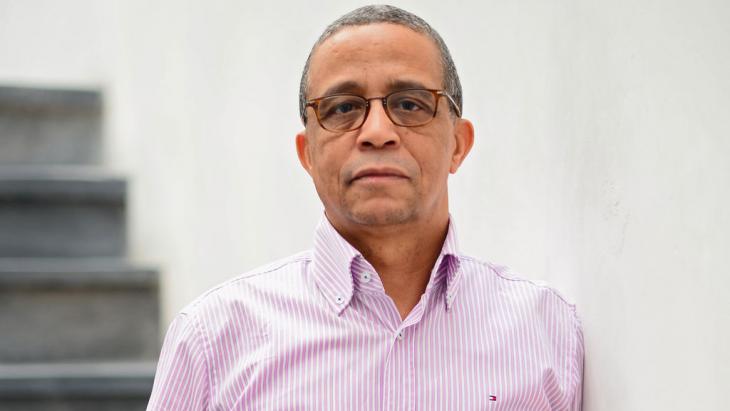 The renowned Algerian writer, Mohammed Moulessehoul, who goes by his pen name Yasmina Khadra, wanted to stand as an independent candidate for the presidency of Algeria. He funded his own campaign and criss-crossed the country seeking nomination. Unfortunately, he only managed to win the support of 43,000 people, 17,000 short of the minimum number needed to be able to contest the election. Regina Keil-Sagawe spoke to the author about his campaign and about the situation in Algeria

In your autobiography, "L'écrivain", there's a surprising encounter between you, a young writer at a military academy, and the former Algerian president Houari Boumediene. Would you have thought at the time that you'd one day run for the highest office in the Algerian state yourself?

Yasmina Khadra: How could I have imagined such a thing back then? I was a schoolboy; my homework was more important to me than anything else. Back then, all I dreamed of was becoming a writer. Literature was the only calling that made me dream. I admired writers. They showed me how to re-invent the world that the army had taken away from me.

I come from an old dynasty of poets. I have the love of words in my veins. I saw it as my duty as a citizen to stand for office. As an Algerian, which is what I am, I found it intolerable that my people's honour was being trampled underfoot. Standing for a fourth term in office although he's severely ill, as President Bouteflika is doing, is pathetic and absurd. 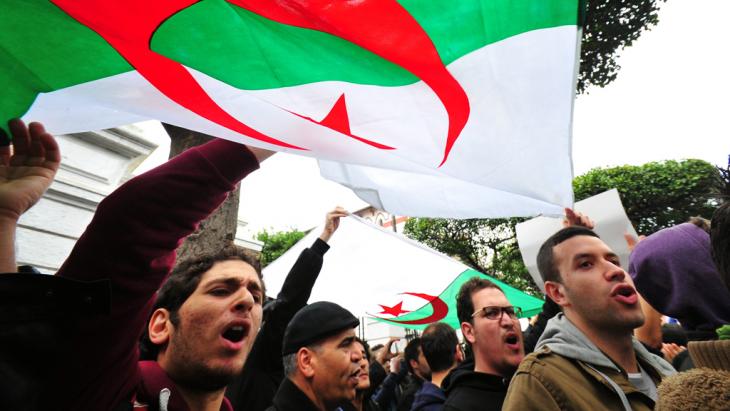 Supporters of the "Barakat!" movement in Algiers voicing their outrage at Bouteflika's decision to run for a fourth term. Following a stroke last year, President Bouteflika was treated in France and has not made public appearances since, which is why the announcement that he was running for president again came as such a shock to many

You were one of around a hundred candidates for the presidency. Tell us about your election campaign.

Khadra: It was a very painful experience. I travelled 10,000 km all around Algeria and realised how traumatised we Algerians have become by half a century of demagogy and disillusionment. I was very naïve, because I'd counted on the support of our country's intellectuals and elite and then found myself all alone in the arena. I wasn't allowed to hold campaign events so I decided to stage literary encounters, three in number, in Constantinois, Kabylei and Oran, but that wasn't enough to raise people's awareness sufficiently. The two-month campaigning period left me little scope. Also, I financed my campaign alone. I had no financial support, which thwarted all my plans. And so I failed: instead of the required 60,000 votes I needed, I only got 43,000.

And how do you explain this failure?

Khadra: There were a number of factors. First the bias in the authorities, which discouraged my supporters. Some of my support committees were infiltrated; others were intimidated or threatened. Some of my campaign offices simply closed down fairly early on. In some cases, my own campaign managers let me down. And after several private TV channels close to the regime ran a smear campaign against me, the media ignored me entirely.

On top of that, my readers didn't want me to enter the lion's den because they were convinced I'd lose and perhaps even be assassinated. The atmosphere was very tense. Despite my determination to follow things through to the end, I got little encouragement. I got a lot of support in Kabylei and the Aurès mountains, but in Oranais, the region I come from, the result was catastrophic.

... which is hardly surprising, considering the region is also President Bouteflika's stronghold. What would have been your priorities if you had been elected?

Khadra: Normalising the lives of the Algerians, who are persecuted by the institutions and disregarded by the decision-makers in the state. My plans would have focused primarily on making the Algerians into responsible stakeholders. Algerians don't feel as if they're living in their own country. They are not respected by any institution or listened to by anyone on the upper echelons.

Their lives are characterised by permanent fear, insecurity and abomination. Our young people have no dreams and no prospects any more. The bravest of them jump into leaky fishing boats just to get to Europe. Many of them lose their lives that way.

The Algerian school system is bankrupt. Lessons have degenerated into a kind of parallel economy. The universities no longer produce elites and future leaders. The regime is only holding on to power by corrupting common sense and consciences. It has neither a societal project nor expertise. It is content to empty the state coffers by launching gigantic construction projects that only benefit the real-estate mafia and the finance sharks.

Khadra: My plan would have been to take a stand against this madness, to teach people to work again, to get to a position in which the oil wealth makes builders of us and not rentiers and profiteers, for us to create jobs and wealth rather than receive alms. Unfortunately, the Algerian regime is pulling all the strings, and it refuses to cede one iota to anyone who's not on its side. Its strength and longevity are based solely on the lack of national solidarity and ambition. Those who have a bone in Algeria gnaw at it silently in their own corner – nothing else matters to them.

But there is the Barakat! movement, ("Barakat!" means "enough") and there are bold young voices in Algeria, such as the rapper Anes Tina, who suggests in his video "Message to the President" that it's time for Bouteflika to retire. There are also other critical voices in the country, voices that are not afraid to speak out against the regime.

Khadra: Yes, all is not yet lost. People are raising their voices; there are demonstrations and protest marches, and the nation is  gradually awakening. I hope that large numbers of Algerians will vote in the election to get rid of the regime by democratic means. And I hope they don't let the government provoke them, because this time violence would definitely put an end to us.

Home
Print
Newsletter
More on this topic
Presidential election in Algeria: Out with the old, in with the oldAlgeria and the Arab Spring: Opting for the Status Quo Rather than ExperimentationInterview with the Algerian Novelist Yasmina Khadra: "There Is a Life after Defeat"
Related Topics
Abdelaziz Bouteflika, Algerian Opposition, Arabic literature, Democracy and civil society
All Topics

Nouara may be 65, but she is ready to join thousands of others who burn their ID and pay traffickers for the chance of a new life in Europe. Zineb Bettayeb reports END_OF_DOCUMENT_TOKEN_TO_BE_REPLACED

In Doha, Arabs from Morocco, Tunisia, Egypt and Algeria are gathering to celebrate the first ever FIFA World Cup to be held on Arab soil. The criticism from Europe? Over the top, ... END_OF_DOCUMENT_TOKEN_TO_BE_REPLACED

"Rebel Game: The Power of Football in the Middle East and the Qatar World Cup", an anthology published by Middle East researchers Jan Busse and Rene Wildangel, takes the upcoming ... END_OF_DOCUMENT_TOKEN_TO_BE_REPLACED

After a two-year hiatus, the Arab League re-convened at the beginning of November in Algiers against a backdrop of uncertainty and discord. By Pierre Boussel END_OF_DOCUMENT_TOKEN_TO_BE_REPLACED

The history of Jews and Muslims is far more entangled than you might imagine – but you have to listen out for it. In "Recording History", Christopher Silver takes us on a sonic ... END_OF_DOCUMENT_TOKEN_TO_BE_REPLACED
Author:
Regina Keil-Sagawe
Date:
Mail:
Send via mail

END_OF_DOCUMENT_TOKEN_TO_BE_REPLACED
Social media
and networks
Subscribe to our
newsletter