Aid organisation statistics on Yemen make difficult reading. Some 20 million people have no access to basic medical care, more than 3.6 million people are refugees in their own country, the food situation is catastrophic, more than half a million young children are acutely malnourished. The organisation Welthungerhilfe warns that the number of people who are starving in Yemen will rise to 16.2 million in the first half of 2021. Is the Saudi blockade of the key port of Hodeidah to blame?

Heinze: I find the blanket condemnation of the Saudi blockade problematic. Don’t get me wrong, I’m by no means a fan of Saudi Arabia. But we need to be fair: the blockade is just one element of a much larger and more complex picture. Yemen has to import 90 percent of its food. But since the start of the conflict six years ago, importers have found it increasingly difficult to get credit.

The costs of inspections and suchlike are also on the rise and there’s extreme inflation of the Yemeni rial, particularly in the south of the country. Because people are often waiting months for their wages to be paid and the jobless rate is very high, this has caused a dramatic slump in purchasing power. Past fiscal policy errors, the destruction of infrastructure – there’s a convergence of many factors here.

In summary: there’s food available at markets all over the country. But people can’t afford to buy it. And then there’s coronavirus on top of everything else! In Yemen, there are so many problems it’s difficult to know where to begin…

In late December a new government was sworn in which the North and the South are now represented with the same number of delegates. Does that make you feel hopeful?

Heinze: Not really. The new government is divided, levels of mistrust between deputies are already high. They can’t even agree on the most basic issues. Some of the ministers are in favour of southern secession, others support unity. There was an attack on the newly formed cabinet in late December at Aden airport.

You would have thought government members would close ranks in response but the opposite happened: the various parties each blamed the other. But many Yemenis still have high hopes for this government. It’s certainly a small step in the right direction that the conflict parties were able to agree on a government. 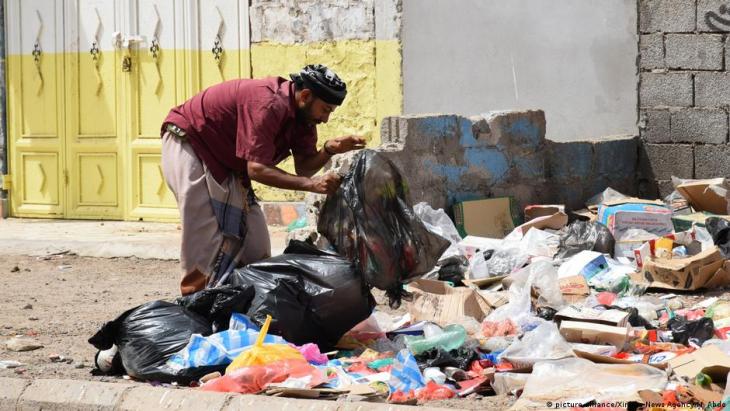 Living in poverty: a man searches through rubbish in Aden for anything salvageable. Extreme inflation of the Yemeni rial, particularly in the south of the country, and extremely high unemployment have caused a dramatic slump in purchasing power. "There’s food available at markets all over the country," says Marie-Christine Heinze. "But people can’t afford to buy it"

The big question for a potential peace process is: will the parties be in a position to put up a joint peace delegation that can try and negotiate a solution with the Houthis? If that doesn’t work, then it may come to a de facto division of Yemen into northern and southern nations, similar to Somalia.

The Hanau terror attack showed just how dangerous racist conspiracy theories can be. And yet it is a threat that continues to be underestimated. Commentary by Daniel Bax END_OF_DOCUMENT_TOKEN_TO_BE_REPLACED

How can we truly appreciate the richness of cultures not our own? In her recent book "What is Islamic art? Between religion and perception", art historian Wendy Shaw explains the ... END_OF_DOCUMENT_TOKEN_TO_BE_REPLACED

In his controversial book published in 2020, French author Pascal Bruckner describes anti-Muslim sentiment as a fiction, claiming that the term "Islamophobia" is being used to ... END_OF_DOCUMENT_TOKEN_TO_BE_REPLACED

Several media reports in recent weeks have focused on the potential threat presented by Islamist groups in Germany. The discourse is fraught with generalisations, both sides ... END_OF_DOCUMENT_TOKEN_TO_BE_REPLACED

Turkey launched its nationwide vaccination campaign with a Chinese vaccine in January. But the public focus is more on the desolate economic situation. Turkish politicians have ... END_OF_DOCUMENT_TOKEN_TO_BE_REPLACED
Author:
Elisa Rheinheimer-Chabbi
Date:
Mail:
Send via mail

END_OF_DOCUMENT_TOKEN_TO_BE_REPLACED
Social media
and networks
Subscribe to our
newsletter