Religious Diversity instead of Intolerance

Yenny Zannuba Wahid, daughter of the former Indonesian president Abdurahman Wahid, is the head of the Wahid Institute in Jakarta, which promotes a tolerant, pluralistic Islam and social reforms in Indonesia. Zaki Amrullah spoke to her 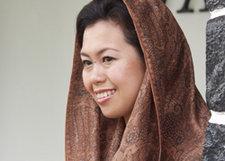 Wahid: "Among the ordinary people, there's a greater acceptance and consciousness of the need to protect tolerance and diversity in Indonesia as part of the heritage of the founder of our nation"

​​ Ms Wahid, your organisation works for pluralism and moderation in Islam. What programmes and activities do you carry out to make your ideas better known among the people?

Yenny Zannuba Wahid: We've developed a variety of social and popular programmes which are directed at helping ordinary people, such as the Riyanto stipendium for chílldren up to twelfth grade. Riyanto, after whom the stipendium is named was a member of the Barison Ansor organisation, and was killed by a terrorist bomb in 2000 as he was helping to guard a Christian church building.

My father Abdurahman Wahid had issued a directive to the Barison Ansor troop [a paramilitary organisation attached to the Muslim lay movement Nahdlatul Ulama, of which Abdurahman Wahid was chairman] to guard a number of churches, since there had been bomb threats against several churches in major Indonesian cities. The bombs were said to be hidden in Christmas parcels.

Christmas parcels were being delivered to the church in which Riyanto was on duty, and as he was taking one out to check it, the bomb went off and killed him. We want to commemorate his actions, since he is a model of jihad – and not in the narrow sense of jihad which is used to intimidate the members of other religions.

You've been the head of the Wahid Institute for nearly five years. How far are you and the organisation accepted by the people?

Wahid: I believe the acceptance is considerable. Our activities, especially at the grass-roots level, are received with enthusiasm. Many religious leaders are involved – not just Islamic scholars, but also representatives of other religious communities. Among the ordinary people, there's a greater acceptance and consciousness of the need to protect tolerance and diversity in Indonesia as part of the heritage of the founder of our nation.

If the population already has such a positive attitude, what are the chances of the Wahid Institute securing the principle of pluralism in the Indonesian people?

Wahid: In my opinion, pluralism and tolerance have deep roots in the Indonesian people. When our nation was founded and Islam came to Indonesia, the religion was accepted out of conviction. It was not forced on the people, as in many other countries. Islam came via trade and culture, and was developed further and found acceptance in a positive way.

One just has to think of the Walisongo [the so-called "nine saints," who were the first ambassadors of Islam in Indonesia, and who ensured the spread of the faith by building mosques and transmitting Islamic teachings]. They used local cultural traditions, such as figure theatre, to spread the teachings. That was done to convince the people. When we consider the small groups in society which are intolerant, we all have to ask ourselves where they get such an attitude from.

On the one hand, it is said that tolerance towards other religions is minimal, but on the other hand, can't one say that it's the endless tolerance shown by part of the Muslim community which has made space within the religious community itself for the development of radical attitudes which have in the end led to terrorism?

Wahid: There have always been these ultra-conservative groups which have had the desire to make Indonesia into an Islamic state. Some of them – including anarchist groups – consider that any means are allowed to reach their ends. But most of the Indonesian population rejects this approach.

​​ The Wahid Institute is not the only organisation of its kind. Others, such as the "Liberal Islam Network" (Jaringan Islam Liberal) have similar positions. Where do the differences lie?

Wahid: There's a decisive difference between the "Liberal Islam Network" and the Wahid Institute. The "Liberal Islam Network" tends to push through values which are regarded as traditional and principled – including some which some people would call radical. With its social and popular programmes, the Wahid Institute is directly involved in the daily life of the lower classes in society.

What would be the most suitable way, in your opinion, to promote pluralism in Indonesia?

Wahid: The most effective method was and is a cultural one, working with good means and the power of conviction – just as the Walisongo used to do in the past. For example, the Wahid Institute makes an effort to use educational classes to provide a direct dialogue with ordinary people. Aside from that, we deal with economic problems. We're planning a programme to improve people's economic situation by providing the poor with cheap credit. Education is also important. We see every kind of education as a priority investment in the promotion of pluralist ideals.

But the radical groups continue to find it possible to gain a public audience with certain issues. Isn't there a danger that, against this background, the idea of pluralism which the Wahid Institute promotes will receive less attention?

Wahid: These groups package their ideas cleverly and they offer forms of dialogue in which they paint everything either black or white. When the debate on the anti-pornography law was taking place, for example, all those who spoke out against the law were described as supporters of pornography. Another example is the current discussion about polygamy. Those who oppose polygamy are being slandered as supporters of marital infidelity. It's suggested to the people that there is only a choice between polygamy and adultery.

Unfortunately, people in Indonesia don't always have the time to listen to things more carefully. Our people is turning into a people of television viewers, with merely superficial knowledge about everything. This I see as a challenge for the future.

How do you see the role of women in the campaign for pluralism?

Wahid: Women could become mediators, promoting the pluralist spirit in society. When a society closes its mind, women are always the first victims. In Aceh for example, women have recently been subjected to raids because they've been wearing tight jeans.

It seems as if women are always destined to be the guardians of morality in society. But that's nonsense: the morality of society does not depend on the behaviour of women, but on what goes in the heads of the people – both men and women. That's why the involvement of women in spreading the message of pluralism is of essential significance.

What is the biggest challenge to pluralism in Indonesia? 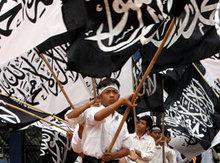 Painting everything either black or white: Radical groups, like "Hizbut Tahrir", continue to gain a public audience with certain religious or political issues

​​ This is an opportunity for certain groups to win over people who live below the poverty line for their anti-pluralist ends – for example, with the claim that poverty and unemployment are injustices which have been created by other groups. We have to commit ourselves to ensuring that this is prevented.

The membership of the largest Islamist party in Indonesia, the "Partai Keadilan Sejahtera" (PKS) is growing rapidly, as one could see at the last parliamentary elections. What's your view of this phenomenon? Are you worried that the growth of this party, which promotes conservative Islamic values, could hinder the campaign for more pluralism?

Wahid: In general, the parties which form the Islam platform are losing votes, while the nationalist parties are winning them. The PKS has also been forced to take on more moderate views. At least, that's how it presents itself in public. What it's like behind the scenes, I don't know. But they certainly don't take up topics like the Islamic state in public any more. They seem to interpret public opinion as being that Indonesia should remain a state based on law, and not an Islamic state.

Could Indonesia go that way?

Wahid: If you mean: could Indonesia be ruled by an ultra-conservative with radical tencencies – yes, that could certainly happen. But looking at the current political tendencies, we are still very far away from that right now.

Liberal Islam in Indonesia
Promoting Pluralism
Conservative Muslims and moderate Islamic organizations in Indonesia are arguing about who is responsible for interpreting their religion. A coalition of moderate Muslims is emerging in opposition to the increasingly intolerant Islamists. Joanne McMillan reports from Java

Indonesia
How Do Women Influence Political Islam?
Efforts to influence political Islam are made by Indonesian women both within the Islamic movement and outside it. Which is more effective is difficult to say. However it is clear, that women in Indonesia have changed their political strategies considerably over the years. By Susan Blackburn

Liberal Islamic Networks in Indonesia
A Counter-Movement to Political Islam
In recent years Indonesia has seen the development of a network of various Muslim NGOs that convey a contemporary understanding of Islam, working to counter the advance of Islamization.