Interview with Yusuf Islam
"To Be, You Must Give up What You Are"

Yusuf Islam, the man who was once Cat Stevens, talks about his first pop album for almost three decades, about metamorphosis and about happiness. Interview by Guido Mingels 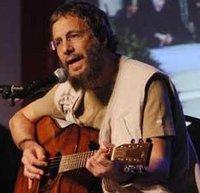 Yusuf Islam: "People must always be ready to face up to changes in their lives. If we do not change ourselves, life changes us"

​​Quite a stir he's causing at the London office of Universal Music, this Yusuf Islam (58). After a break of 28 years, the man who until 1979 was known as Cat Stevens, has returned to popular music with a secular album "An Other Cup", and is asking for a tape cassette. Brushes with journalists in the past have made him warily keen to make his own recordings, but today he has no cassette for his recorder.

Thus the excitement, as people go scurrying off to search in all directions. The anecdote makes two things clear. Music companies in 2006 no longer use tape cassettes, and Yusuf Islam is, technologically speaking, not so far removed from Cat Stevens. With this one exception, however, his life has changed completely.

Born Steven Demetri Georgiou in London in 1948 to a Swedish mother and Greek-Cypriot father, it was around 1970 that Cat Stevens albums began to move the world to tears, and to sell – over fifty million copies. They were songs of uninhibited melancholy, searches for meaning, and love and misunderstood existential angst sung by a voice with an almost transcendental quality, arguably the most hypnotic in pop history.

And, they had a message: save the trees, let the children play, make peace. Many of the songs, "Morning has Broken" being just one example, have become timeless classics.

Like all converts Yusuf Islam began as a radical. After turning his back on the music business he sold all his instruments and gold discs, learned Arabic and set up an Islamic school in London. He married a Muslim woman in an arranged marriage and had five children. Once, running by chance into his former muse Patti d'Arbanville, he declined, for religious reasons, to talk directly with her, communicating instead, via her husband.

His voice was heard only on didactic spoken recordings in Arabic as he refused to have anything to do with musical instruments. He hit the headlines in 1989 after ill-considered statements made to the media created the impression that he was in favour of the fatwa pronounced against Salman Rushdie.

Although he immediately acted to try to correct this impression, the Sun newspaper headlined with – "Cat says: Kill Rushdie!" As a consequence, many radio stations removed his songs from their playlists for years. The 1990's saw him involved in aid projects on behalf of the United Nations in places such as Kosovo, Bosnia and Iraq while he increasingly took on the role as advocate for Islam in the West. In 2003 he received the "World Social Award".

The man from the record company is issuing final instructions. No political questions, ditto Islam; music only. The new CD lies in pristine splendour on the table. The cover design features a coffee cup filled with sparkling blue sea. The man who was once Cat Stevens is ensconced on a sofa, looking astonishingly small. He is dressed in a woollen pullover and cord trousers, the beard lightly frosted with grey.

Yusuf Islam: You can call me Yusuf.

Yusuf, would you describe "An Other Cup" as a comeback?

Islam: Not really. I think this album carries on from where the earlier ones left off; it moves on from my earlier thoughts and songs. It's about where I am today.

You've put this album out under the name "Yusuf", but there are clearly many points of contact here with Cat Stevens. There are cover versions of some of your old songs, although in one case you have added a de-secularising touch by substituting the word "souls" for the earlier "girls".

Islam:That song was originally a love song, now it is about a higher, divine love.

For religious reasons you have not allowed yourself to make music for more that twenty years. Why the change now?

Islam: I only recently came to a decision on the question of using musical instruments, on whether or not it is allowed. Until that time I was not certain. There are many different opinions on this question within Islam. There is no clear doctrine. I needed time to be sure that I was doing the right thing. And I believe I have found an answer that is very simple. Whatever does or inspires good is good; whatever does or inspires bad is bad.

Why is the album called "An Other Cup"? Why "An Other", rather than "Another"? Even your manager couldn't explain it to me.

Islam: Just a little grammatical quirk. I wanted people to understand that this album really is an other cup. Not just another cup, but a different cup.

Islam: The cup is also on the cover of my best-known album "Tea for the Tillerman" from 1970, the insertion of the space is meant to show that things have changed since that time, that we live in a different world. The CD is a step in a new direction. Some people believe it to be a very courageous step to take. I am building a bridge and trying to walk on it. Many people are afraid to step on to this bridge.

The bridge between East and West.

Islam: Exactly. The coffee cup is also a symbol of the hidden treasures of Islamic civilisation. Coffee houses, the cafés we see today on every street corner, are a Muslim invention. They had them in Istanbul in the 15th century, and even earlier in Yemen. So the cup becomes a symbol of the things we share with one another.

One of the songs you sing on the album is the Nina Simone classic "Please Don't Let Me Be Misunderstood". Was covering this meant to be a comment to the press in answer to the malicious headlines that came your way?

Islam: Yes, it's a perfect fit. I'm just a soul whose intentions are good.

What is it you are thinking of when you ask in the song not to be misunderstood?

Islam: From the first day on, after I became a Muslim, there were many people who saw it as a strange thing to do and who were very negative in their reactions. This is undeniable if one looks back at how the media – or certain parts of the media – have portrayed me over the years, from the very first day on. And these were people who had no idea what I stood for when I was Cat Stevens, far less could they understand Yusuf Islam.

You're thinking of headlines like "Cat says: Kill Rushdie!" that appeared in the wake of your comments…

Islam: I wouldn't even start that.

But the song does refer to…

Islam: I would change the subject if I were you.

When you look at old photographs of Cat Stevens do you sometimes wonder if it is really you? How do you reconcile the three identities: Steven Demetri Georgiou, Cat Stevens und Yusuf Islam?

Islam: There is a song on the album, which, in a way, provides an answer to this question. It's about butterflies leaving their silk palaces. The way a caterpillar changes into a butterfly is one of life's great mysteries. If I think back on the various phases of my life, I see everything as metamorphosis, as constant transformation, an incessant search for happiness.

Was Cat Stevens the caterpillar, Yusuf the butterfly?

Islam: No! No. That was only an example, a metaphor for the mutability of life. Take a look at an embryo. It's a clot of congealed blood. You were a clot of blood; I was a clot of blood. And later this clot takes on the form of an independent living being, becomes self-confident and believes itself master of its own destiny.

Science has long said everything there is to explain about this.

Islam: Science can't say why it is that I am me and you are you.

Islam: Yes, very good, you're right. And the things I have learned since then I try to express in my music.

Does that mean that Cat Stevens asks the questions, Yusuf provides the answers?

Islam:: No. But at least I've moved on a bit since then.

How would you describe yourself today? Musician? Teacher? Cultural mediator?

Islam: I am many things. I am a father. I am also a son. But I have a biography that has been much more publicly documented than that of most other people. That is, in some ways, a gift.

It has pushed you into the role of an ambassador for Islam. You are the world's best-known convert and have to provide answers. Are you comfortable with that?

Islam: It's a great responsibility. But it is also one which suits me. All I have to do is to speak about what I've done and what I think. I am a mirror, a magnifying glass, through which the Muslims can see the West and the West, Islam. That means though that I must always be pure and transparent.

Islam: Yes. But it seems it has been ordained for me. People must always be ready to face up to changes in their lives. If we do not change ourselves, life changes us. And therein lies the key. Everything that we see in nature is in constant flux. Human beings tend to want to hold on to what they have.

That's something you always avoided as Cat Stevens. Just when the public or the music industry thought they could categorise you, you changed.

Islam: Yes, maybe. That reminds me of something very wise that was said by a philosopher, I think his name was Eckhart…

Islam: He said: To be, you must give up what you are. I believe that to be very profound; very profound. That is more or less what I did, maybe even what I‘m still doing.

What about the Muslim community, the scholars who influence you, for example, what are they saying about your return to music?

Islam: That remains to be seen. But in Islam there is something called the principle of common good. What that means is that whenever one is confronted by something that is not mentioned in the scriptures, one must observe what benefit it can bring. Does it serve the common good, does it protect the spirit, and does it serve God? If the scholars see that it is something positive, they may well approve of what I'm doing.

This interview was previously published by the Swiss magazine Das Magazin.

Junaid Jamshed
"I Was a Sinner for Years"
Junaid Jamshed was the first pop star on the Pakistani music scene. At the height of his career, he turned his back on the world of glitz and glamour and devoted himself to Islam. A portrait by Nadia Riaz

Islamic Music between Pop Songs and Hip-Hop
If George W. Bush Were Muslim
Music with religious content is on the rise – also among young Muslims in Europe. Martina Sabra asks what "Islamic" music is and what role it plays for Muslim youth in Europe

END_OF_DOCUMENT_TOKEN_TO_BE_REPLACED
Social media
and networks
Subscribe to our
newsletter