Interview with Zafer Yenal
On the Connection between Nationalism and Cuisine

Zafer Yenal, assistant professor of sociology at the Bogazici University in Istanbul, explains the important connection between political processes and the cuisine – and why the term "Turkish cuisine" is a new development only since the 1980s. 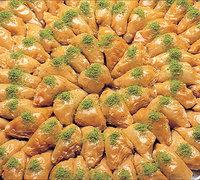 "Does baklava have a national identity?" Such a question is utter nonsense. All these dishes have been transported from place to place for centuries, says Yenal

​​What food or dish is most discussed in Turkey?

Zafer Yenal: Recently there was a discussion about Halloumi cheese: whether it belongs to the Cypriot Turks or the Cypriot Greeks, or to the Turks. Such topics are regarded as very essentialist.

Before that a big discussion was held over the origins of the dessert baklava. The question was raised: "Does baklava have a national identity?" Such a question is utter nonsense. All these dishes have been transported from place to place for centuries. Different peoples prepare them in their own way and eat them in their own way. In the process, these dishes have absorbed something from every location and changed along the way.

What makes baklava baklava is not its Turkish, Greek, or Arab identity. Today, as a result of historical and societal influences, Baklava is eaten in Greece, Lebanon, Syria, and Armenia as well as in Turkey. The motivation behind the desire to account for the origins of a dish lies in the significance of nationalism in the modern world.

This happens on the same level as the pleasure we feel when our national team defeats their national team, or because we consider the people in our country to be more honorable, honest, hard-working, and successful than others. All of this is rooted in nationalism.

How do such discussions influence society?

Yenal: This is a very important issue. These topics are not taken seriously in the media. The reports and commentaries nurture nationalism, allowing it to affect everyday life. As a result, people do not hesitate to think in the category of "We and Them." For this reason the concepts and language we use to express our thoughts about music, dance, food, and the like are very important. Consequently, there is a great potential for these discussions to become dangerous.

Normally, conversations about such discussions start with a joke. Nobody considers this to be dangerous. At what point do they cross the line?

The same thing is true when soccer fans from opposing teams get into fights in Istanbul or kill each other at international soccer matches.

To perceive the seriousness of this question, we don't necessarily need events like these, for such a boundary is quite vague. We can see the line being crossed with ordinary, commonplace events to which we pay little attention as well as in political situations.

In Istanbul Kurdish cooks work in many restaurants. There are certainly recipes cooked from many different regions. However, everything prepared in Turkish restaurants is called "Turkish food." Are people in Turkey aware of this?

Yenal: That's a very important observation you've made. Of course, not everyone who works in the restaurant business is Kurdish. But there has been a migration movement as a result of nearly thirty years of perpetual war in southeastern Turkey.

There are cooks and chefs who are not necessarily Kurds. But when we look at the logistics of the restaurants, we see that practically all the cleaning work is done by Turkish Kurds.

Up until the 1960s and 1970s this work was carried out by Greeks and Armenians. Much earlier almost all the cooks and chefs working in Istanbul's most famous kitchens were Greeks or Armenians. This changed after the events of 1955 (the Istanbul Pogrom in September directed primarily at Greeks, Ed.), when nationalism began to show its ugly face.

This situation persists today, even though many non-Muslims still live in Turkey. Later this legacy was forgotten. Sometime in the 1960s the myth of a Bolu cuisine suddenly appeared (a northwestern coastal region in Turkey noted in particular for its cuisine, Ed.) If you take this development into account, you can see that the term "Turkish cuisine" is a concept constructed retroactively.

Isn't this true of every cuisine?

Yenal: Yes, this is true of every cuisine if you take a look at numerous research findings. If food travels from one place to another, it inevitably changes. This is because each cook gives the dish new flavor and aromas.

But do people in Turkey talk about this? Of course not. People are convinced that there is a "Turkish cuisine" and "Turkish food." Everything is defined by its Turkishness, and everything is regarded as an opportunity to support national identity.

What observations have you made in Germany?

Yenal: Let's take a look at the importance of the döner in Germany. While the döner here has gained in popularity, it's obvious that it is associated with Turkishness. At the same time you can say that nobody notices what constitutes a döner, but instead who prepares it.

How do political developments change the cuisine?

Mussels used to be made primarily by Armenians and Greeks; until the 1950s the street vendors were Armenians or Greeks. To understand the "Kurdization" of mussels, you have to know the history of Turkey after 1970-1980. You have to know why the Kurds were forced to leave their homeland by the hundreds of thousands and to come to Istanbul, Adana, Van, or Batman.

There is an important connection between all these political processes and the cuisine. The term "Turkish cuisine" is a new development. This term has been increasingly used in the media only since the 1980s.

What is the connection between nationalism and cuisine?

Yenal: Food itself has no particular significance. A bean is a bean everywhere, and rice remains rice no matter where you are. But how is a deeper importance ascribed to food, and how are people sensitized to their different affiliation? Precisely this is the crucial point that links cuisine and nationalism.

In the case of cuisine we can easily observe how deeply nationalism is anchored in today's modern world and how much this concept constricts our social lives.

Let's take a look at an Armenian cookbook from 1915. Here we would find dishes that can be called Turkish as well as many that we would identify as Armenian. At the same time this cookbook not once mentions Armenian or Turkish cuisine. Instead the author writes "This dish derives from the region around the city of Merzifon."

What we understand as nationalism today is quite different from how people understood it eight years ago. This different understanding shows us that these topics are constructs. When something has been constructed by people or society, we know that we will have to work very hard to change it. For this reason it is very important to make the connection between cuisine and nationalism.

Dr. Zafer Yenal is assistant professor of sociology at the Bogazici University in Istanbul. He is currently a fellow at the "Wissenschaftskolleg Berlin" as part of the project "Europe in the Middle East – The Middle East in Europe". Yenal studied at Middle East Technical University in Ankara and graduated from Binghamton University, earning a Ph.D. in sociology with his dissertation on "The Culture and Political Economy of Food Consumption Practices in Turkey." He has published a monograph on human rights and civil society in Turkey as well as numerous scholarly articles. The topic of his current project is "Culinary Cosmopolitanism: Changing Forms of Conviviality in the Late Nineteenth Century and Early Republican Istanbul."

END_OF_DOCUMENT_TOKEN_TO_BE_REPLACED
Social media
and networks
Subscribe to our
newsletter