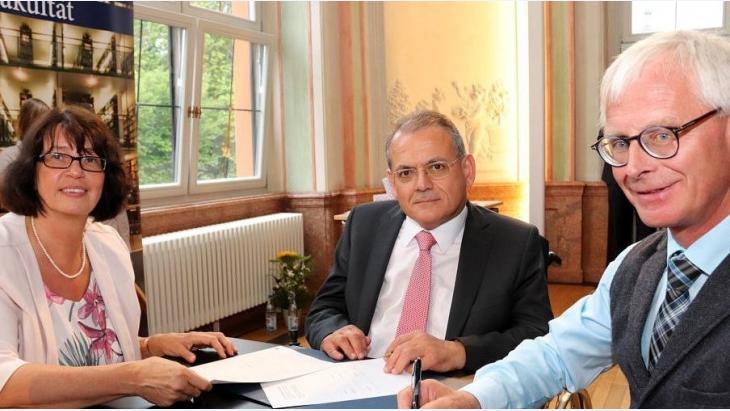 Introducing the Key Concepts project
From religious tolerance to acceptance

A new project launched by the University of Erlangen-Nuremberg is working out key concepts from Judaism, Christianity and Islam with the aim of promoting interreligious dialogue. Presenting solid academic findings on similarities and differences, scholars will attempt to disarm agitators on all sides. Claudia Mende spoke to its director Professor Georges Tamer

Professor Tamer, what approach are you taking in the Key Concepts project?

Georges Tamer: We have compiled a list of key concepts in Judaism, Christianity and Islam. These concepts will be discussed by renowned scholars of all three religions at conferences and elaborated further, and the results published in plain language. The first volumes will be issued in 2019.

Each chapter follows a uniform scheme. The topics covered include the terminology used and the historical development of the concepts as well as their many facets, that is, how varied the perception of these concepts is even within a single religion. The main focus is then on the commonalities and differences in the interpretation of these concepts in the three monotheistic religions.

What concept are you currently working on?

Tamer: At the moment we are preparing conferences on the concepts of "time" and "history" (12-14 December of this year) to be followed by the concepts of "human being", "sexuality", "body", "soul", "violence" and "just war" in 2019. We are also busy at work on publications treating the concepts already dealt with, especially the volume on freedom from a Jewish, Christian and Islamic point of view. There is a separate volume dedicated to each concept. The structure is uniform: an introduction, three chapters and an epilogue highlighting similarities and differences and outlining the significance of the term in contemporary discourse.

How are the results being disseminated?

Tamer: There is a website that presents summaries in German, English and Arabic in the form of a report on each of the nine conferences held so far. On our YouTube channel there are short descriptions of the concepts – in particular in Arabic – to make our results accessible to those who have little knowledge of German, explicitly for the benefit of refugees as well. We're also on Facebook and Twitter.

Please give an example of a concept.

Tamer: Take the concept of "human being" in the three monotheistic religions. What they all have in common is that they regard God as the creator of all beings and thus also of humankind. But while Judaism puts the focus on observing religious laws in order to lead a life pleasing to God, in Christianity man is freed from the guilt of Adam and Eve through Jesus Christ's incarnation and death on the cross.

Islam, which sees man as God's representative on earth (khalifa), does not recognise "original sin" in this form and accordingly does not see man as in need of redemption. The Koran thus denies the death of Jesus on the cross and emphasises the observance of the Sharia as the way to Paradise. These are not mere nuances, but serious differences with regard to the understanding of man in the three religions.

How did the idea for this research project arise?

Tamer: It was based on my experience that participants in interreligious dialogue often use the same term without realising that the concept behind it is understood in a different way by the others. I have been active in this field for many years and have noticed how things frequently go unclarified: what does my Muslim, Jewish or Christian interlocutor mean when he speaks of family, sexuality, revelation, state, society or freedom? These key concepts form the very foundation for these religions.

In "Iran. Die Freiheit ist weiblich", journalist Golineh Atai describes the dogged resistance of courageous Iranian women against the Islamic Republic and the mullahs who have ... END_OF_DOCUMENT_TOKEN_TO_BE_REPLACED

One year ago the Taliban returned to power, seizing Kabul; the U.S. and its allies made a panicked exit from the country. Of all the books written on the subject, four stand out ... END_OF_DOCUMENT_TOKEN_TO_BE_REPLACED

Unflattering terms were used at a German Football Association human rights congress aimed at "intensifying the discussion" ahead of the World Cup. One speaker in particular made ... END_OF_DOCUMENT_TOKEN_TO_BE_REPLACED

Egyptian authorities have Mada Masr in their sights once again after critical reporting. But the editor of the country's last independent news source is adamant they will continue ... END_OF_DOCUMENT_TOKEN_TO_BE_REPLACED

Like Christianity, Europe's history is one of migration. Both have strong roots in the Orient and in cultures thousands of years old. Cultural historian Bernhard Braun invites us ... END_OF_DOCUMENT_TOKEN_TO_BE_REPLACED

Comments for this article: From religious tolerance to acceptance

A regular columnist of newageislam.com Mr. Ghulam Ghaus Siddiqi deals with this subject at some length. Here are some excerpts from his article:

"Tolerance in Islam, rightly understood, is patience toward a practice or opinion one disapproves of. This understanding may come as a surprise to many people who interpret tolerance simply as a synonym for the words ‘acceptance’ or ‘agreement’. Islamic tolerance entails disagreement yet a firm moral commitment to the decent treatment of the person with whom one disagrees. So tolerance in Islam can be understood as a patient forbearance against something which is disliked or disapproved of.

"Tolerance in Islam is viewed as a prerequisite essential to maintaining peaceful coexistence. Islamic concept of tolerance can be exercised against a broader spectrum of differences; social, cultural, racial, political, ethnic, religious, and domestic. Islam abhors intolerance causing murder, genocide, violence, religious persecution, injustice and creating disorder in any parts of the globe.
..
Tolerance in Diversity

Islam recognizes diversity, enumerating it among the signs of Allah for the people of knowledge, as the Quran reads, “And among His signs is the creation of the heavens and the earth, and the differences in your languages and colours; indeed in this are signs for people of knowledge” (30:22). This verse asserts that creation of the sky and earth as well as diversity in colours and languages is among the Divine signs. The human beings are divided into many races, having different physical forms and colours—white, black, yellow etc. and this can be easily understood by “the people of knowledge”.
..
Tolerance Linked with Religious Freedom

"Tolerance is linked with freedom of religion. In this context the oft-quoted verse is of Surah Baqarah (2:256) in which Allah Almighty says, “There is no compulsion at all in Din (Religion). Surely, the guidance has become evidently distinguished from error. So he who rejects false gods and believes in Allah has grasped such a firm handhold that will never loosen. And Allah is All-Hearing, All-Knowing” (2:256). This verse establishes a basic Islamic principle upon which the idea of non-compulsion is built, guaranteeing religious freedom for all non-Muslims including Hindus, Christians, Jews, Buddhists and Sikhs etc."

He also deals with these following points in some details;

Tolerance towards Non-Muslims in Islamic Governance

END_OF_DOCUMENT_TOKEN_TO_BE_REPLACED
Social media
and networks
Subscribe to our
newsletter