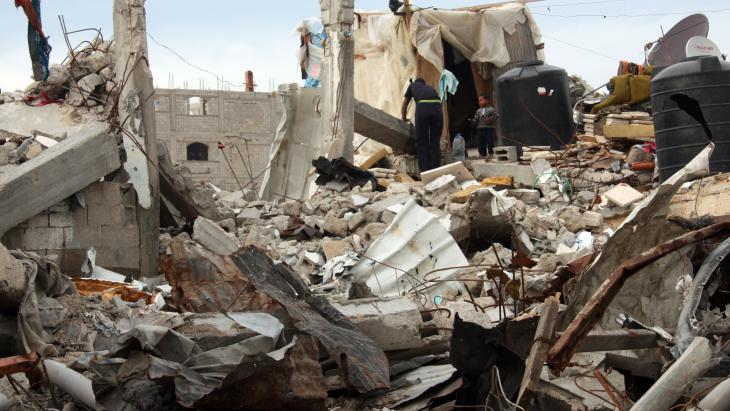 Investigations into the 2014 Israel–Gaza conflict
What prospects for accountability in Gaza?

Half a year has passed since the end of the hostilities between Israel and Hamas. Both NGOs and international organisations are now investigating the events of summer 2014. Ylenia Gostoli reports on these investigations and the reactions to them on both sides of the divide

Six months after the ceasefire that marked an official end to hostilities between Israel and Hamas, Gaza still lies in rubble. According to the UN Office for the Coordination of Humanitarian Affairs (OCHA), 2,205 Palestinians were killed during the 52-day war. Nearly 70 percent of them were civilians, including 521 children and 283 women. 71 Israelis were also killed, 66 of them soldiers. But numbers alone do not tell the whole story; they will not determine the outcome of any quest for accountability.

Following Palestinian President Mahmoud Abbas' signing of the Rome Statute at the end of last year, Palestine is set to become a full member of the International Criminal Court (ICC) on 1 April 2015, paving the way for it to take jurisdiction over war crimes committed in the last Gaza war and in the West Bank.

In January 2015, the International Criminal Court (ICC) prosecutor launched an initial probe into the events in Gaza, charged with investigating the conduct of both Israel and Hamas.

The Israeli government has been severely restricting access to Gaza to independent, external experts and investigators. During the offensive, two major international human rights organisations, Amnesty International and Human Rights Watch, were denied permits to enter Gaza. Later, a UN Human Rights Council (UNHRC) delegation was denied access due to an alleged conflict of interest of the appointed head of the inquiry, prompting his resignation.

The Israeli section of the international NGO Physicians for Human Rights may be the only organisation to have sent international experts into Gaza during and shortly after the offensive, with the mandate to "investigate the health and human rights impact of events in the Gaza Strip." A team of eight international medical experts, including four with expertise in forensic pathology, conducted interviews and reviewed evidence over three visits to the Gaza Strip between 19 August and 12 November 2014. Their access was facilitated by local NGOs: the Al Mezan Center for Human Rights, the Gaza Community Mental Health Programme (GCMHP) and the Palestinian Center for Human Rights in Gaza (PCHR). 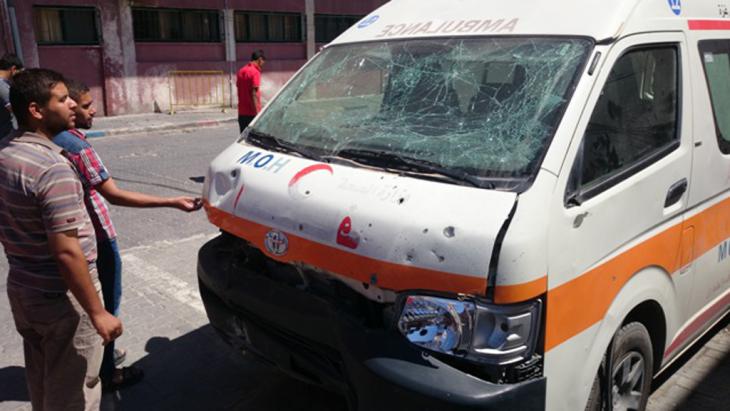 An ambulance in Gaza that was hit during the Israeli army offensive. According to a report by Physicians for Human Rights - Israel, "double tap" or multiple attacks caused casualties among rescuers and medical teams as well as people fleeing their homes

In identifying patterns of injury and attack, the report reveals a "consistent picture of people injured or killed while in, or very close to their homes." Forensic pathologists reviewed 370 digital images from the Shifa hospital archive in Gaza City and interviewed 68 injured patients, coming to the conclusion that the majority of injuries were the result of explosions or crush.

One of the most significant findings of the report is that "double tap" or multiple attacks (two or more consecutive strikes on the same location) caused further casualties amongst rescuers and medical teams, as well as people fleeing their homes. One paramedic interviewed, Akram Al-Awoor, is quoted in the report as saying: "The 2014 war was by far the most difficult of three wars I have experienced as a PRCS [Palestine Red Crescent Society] medic – a massive burden of injured, and targeting of medics and ambulances; typically a first strike followed by a second strike when people gathered to assist victims of the first."

In one of the case studies, a medic recounts coming directly under fire as his team was trying to evacuate the wounded after a mass-casualty attack on the neighbourhood of Shejaia, east of Gaza City, on 20 July, leading to the death of a paramedic. The account can be cross-referenced with media reports and other testimonies.

According to a WHO-led impact assessment, 23 health workers died as a direct consequence of the conflict, of which 16 were killed while on duty. A further 83 were injured. Seventeen hospitals and 56 primary healthcare centres were either destroyed or damaged during the attack.

The IDF criticised the report for being "based on one-sided and incorrect data from biased sources". In a statement, a spokesperson for the IDF said that it "seems to neglect the overarching context of the heavy fighting occurred on the ground throughout the operation," during which "Hamas systematically and deliberately used civilian objects, such as medical installations, ambulances and other civilian infrastructure for a wide range of military purposes." 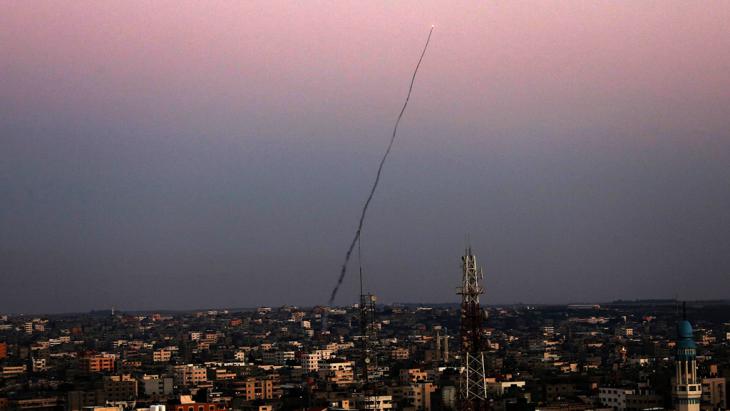 The IDF has dismissed the report by Physicians for Human Rights - Israel as "based on one-sided and incorrect data from biased sources". It also says that "Hamas systematically and deliberately used civilian objects, such as medical installations, ambulances and other civilian infrastructure for a wide range of military purposes." Pictured here: an M75 rocket launched from Gaza into Israel by militants of Ezz Al-Din Al Qassam militia, the military wing of Hamas, 10 July 2014

What constitutes a legitimate military target?

The Physicians for Human Rights' report concludes that "the attacks were characterised by heavy and unpredictable bombardments of civilian neighbourhoods in a manner that failed to discriminate between legitimate targets and protected populations," and that such attacks "were unlikely to have been the result of decisions made by individual soldiers or commanders; they must have entailed approval from top-level decision-makers in the Israeli military and/or government."

The IDF's Military Police branch has launched investigations into some of the incidents, led by the Military Advocate General (MAG). But even setting aside the inherent conflict of interest and alleged inefficiency of the system, the issue remains that a military police investigation doesn't have the authority to look at these levels, but looks at the conduct of the troops.

"Unfortunately, there is no current Israeli mechanism that can look at the issue at the heart of this," says Sarit Michaeli of Israeli human rights organisation B'Tselem, which published a report last January in which they investigate 70 individual incidents where at least three people were killed while inside their home in a single attack.

"What we're talking about isn't the occasional mistake or the occasional result of a wrong decision by an individual soldier, but the result of an official policy that deemed these residential homes legitimate military targets," says Michaeli. 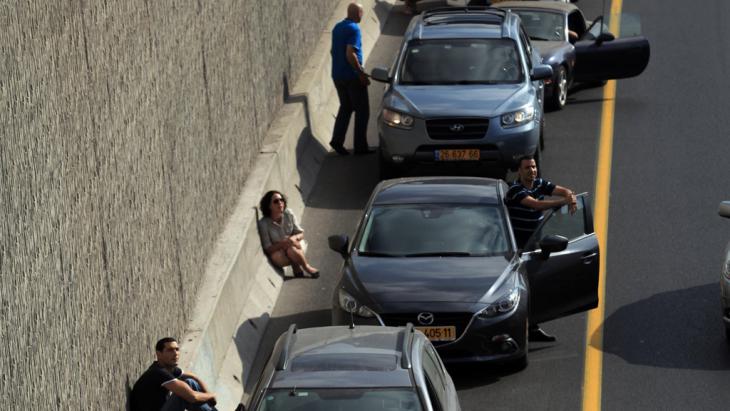 Israelis take cover near their cars while sirens sound over Tel Aviv, 9 July 2014. According to Ylenia Gostoli, although few experts are willing to comment on the ongoing work of the ICC commission, it seems clear that the case against Hamas "may be much more straightforward due to their deliberate targeting of civilian infrastructure"

What is a war crime?

Under international humanitarian law (IHL), the killing of civilians in itself does not automatically warrant war crime charges. Article 8.2(b) (iv) of the Rome Statute, defines a war crime as

"Intentionally launching an attack in the knowledge that such attack will cause incidental loss of life or injury to civilians or damage to civilian objects or widespread, long-term and severe damage to the natural environment which would be clearly excessive in relation to the concrete and direct overall military advantage anticipated."

The problem, says Michaeli, is that in order to establish whether an attack was proportionate in relation to its projected military gains, "one has to know what was the actual aim of the operation, who was the target, and the Israeli army is not willing to provide almost any information."

Few experts are willing to comment on the ongoing work of the ICC commission. However, what seems clear is that the case against the Hamas leadership may be much more straightforward due to their deliberate targeting of civilian infrastructure. Then there is the issue of credibility and bias. "The whole point of these investigations is that they have to not just be impartial, but also seem impartial," says Michaeli.

Asmaa al-Atawna's debut novel "Missing Picture" has been published in German translation (Keine Luft zum Atmen – Mein Weg in die Freiheit). In it, she describes life in Gaza from ... END_OF_DOCUMENT_TOKEN_TO_BE_REPLACED

At the end of every year, the team at Qantara.de gives you a run-down of the ten most-read articles on the site over the past 12 months. Here is a quick overview of the stories ... END_OF_DOCUMENT_TOKEN_TO_BE_REPLACED

Palestinian Christians are an integral part of the Palestinian national movement. This is the conclusion reached by the Chilean-born Palestinian political scientist Xavier Abu Eid ... END_OF_DOCUMENT_TOKEN_TO_BE_REPLACED

Jesus – Issa in Arabic – doesn’t merely enjoy the highest place among the prophets in the Koran. He is also revered in Islam’s mystical tradition for his message of love and mercy ... END_OF_DOCUMENT_TOKEN_TO_BE_REPLACED

With reported hostilities against Israeli journalists and the flag of the Palestinian territories flying on the streets and in the stadiums, it is clear the World Cup in Qatar is ... END_OF_DOCUMENT_TOKEN_TO_BE_REPLACED
Author:
Ylenia Gostoli
Date:
Mail:
Send via mail

END_OF_DOCUMENT_TOKEN_TO_BE_REPLACED
Social media
and networks
Subscribe to our
newsletter