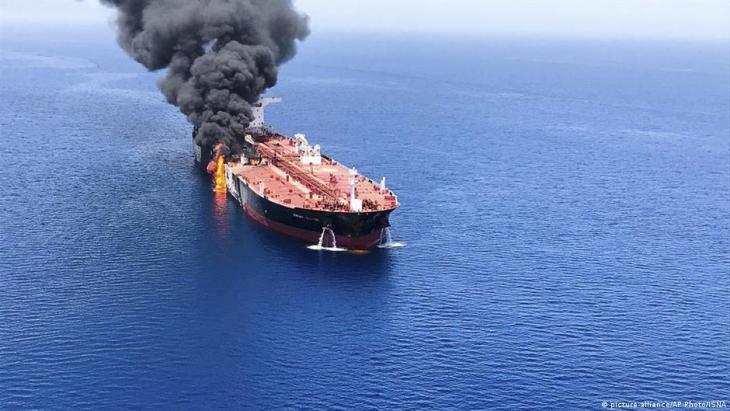 Iran and global energy supplies
Covert conflict in the Gulf

Since Russia invaded Ukraine, Europe has been trying to find alternatives to Russian gas, inevitably zeroing in on the Arab Gulf states. In his commentary, Yemeni politician Muammar al-Iryani proposes a simple way for the West to secure international shipping routes

On 8 November, the U.S. Navy intercepted an Iranian ship carrying materials used for the manufacturing of weapons on its way to Yemen. According to experts, they detected 70 tonnes of ammonium chlorate used in the manufacture of ballistic missile fuel, and 100 tonnes of explosive urea fertilizer. In a statement, the U.S. military announced that the ship posed a threat to commercial navigation and the security of the region, and it disposed of the contents, sinking the ship after handing over its crew to the Yemeni Coast Guard forces.

This wasn’t the first time that such shipments had been intercepted. Since 2015, the U.S. Navy has intercepted several ships carrying various weapons shipments and components for manufacturing ballistic missiles and drones. It was also announced earlier this year that a similar ship coming from Somalia carrying a shipment of urea, used in making explosives, was on its way to the Houthis. Likewise, in April of this year, the British Royal Navy seized an Iranian ship loaded with missiles in the Gulf of Oman that was bound for the Houthis. By evaluating the contents of the ship, explosives experts were able to link it to the attack carried out by the Houthis in January of this year on the UAE capital, Abu Dhabi. 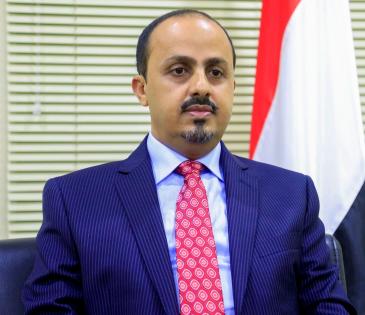 "Rather than forming more initiatives and expending millions and much effort in protecting commercial shipping lanes, concerned leaders – those in Europe in particular – should devote their efforts to supporting the Presidential Leadership Council and the legitimate government that represents the entire Yemeni political and social spectrum, thereby enabling it to impose control and establish security and stability along the Yemeni coastal strip," writes Al-Eryani. "At the same time, this would limit the Houthis and their military capabilities, which have recently been involved in the undeclared Iranian war on the energy infrastructure, facilities, ports, and oil tankers in international waters. Evidence exists and solutions are on the table. Can European countries deal with the root causes of the problem, or will they continue to waste more time dealing with the symptoms?"

We have seen how in 2016 the Houthis fired missiles at the U.S. Navy near Bab al-Mandab, indiscriminately planted sea mines in territorial waters, used a remote-controlled boat bomb to attack Mocha in the Red Sea in 2017, attacked Saudi ships in Hodeidah port in 2018. There was also the recent attack on the ports of Al-Nashima in Shabwa and Al-Dhaba in Hadramout Governorates, not to mention the targeting of an oil tanker in Qena Oil terminal in Shabwa in October 2022.

We also followed Iran targeting the oil tanker "Pacific Zircon" off the coast of Oman on 16 November with a bomb-laden drone, which led to minor damage to the hull of the tanker, in an attempt to influence energy supplies in light of the crisis the world is currently experiencing, impose its conditions in negotiations to revive the nuclear deal, and further its expansionist policies in the region.

Moreover, we anticipate a looming environmental catastrophe, expected from the Safer oil tanker anchored in the Red Sea, off the Yemeni coast, which will cost nearly $80 million to clean up. Since 2015 the Houthis have consistently denied the United Nations technical team access to assess the situation and initiate the necessary plan of action.

It has become clear that the Houthis' control of parts of Yemen with the support of Iran – in violation of all agreements, including the Sweden agreement and the UN-sponsored truce, all international laws, charters and Security Council resolutions, while undermining all de-escalation and peace efforts – not only poses a threat to Yemen, but also to the safety of commercial ships and the security of international shipping lanes.

As a result the U.S. and British navies with other allied countries formed a new security team in April of this year to monitor the Red Sea, stabilise navigation and secure the important international trade line through Bab al-Mandab Strait, the Red Sea and the Gulf of Aden.

This has supplemented the active role already being played by Saudi Arabia in leading the Arab Coalition, securing international shipping lanes in the Red Sea and Bab al-Mandab, and thwarting dozens of terrorist attacks planned by the Houthis planned over the past eight years involving remote-controlled booby-trapped boats and naval mines, all of which are military techniques imported from Iran.

Since May 2022, several European countries, led by France, have been calling for the powers of the European Supervision Mission on the Strait of Hormuz – formed at the beginning of 2020 from eight European countries – to be extended to include the Red Sea and the Indian Ocean through the Bab al-Mandab Strait. The importance of this route lies in the fact that 10% of world trade passes through this strait, and it is expected to increase after the Russian-Ukrainian war. 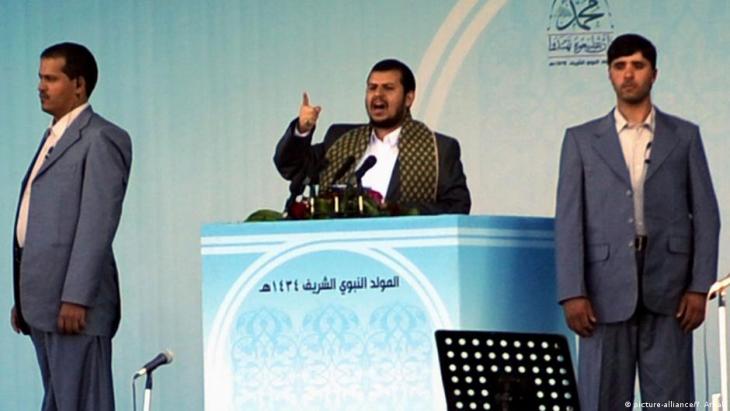 The Iranian backed Houthis, who control vast areas of north and west Yemen, claimed responsibility for the drone attacks on vital Yemeni civilian oil ports controlled by the internationally recognised Yemeni government. This resulted in a stop in exports of Yemeni crude oil to global markets, something on which the Yemeni authorities rely to pay the salaries of its employees. The Houthis have since been calling on the government – which is supported by a military coalition led by Saudi Arabia – to pay the salaries of public servants and retired military personnel in the areas under their control, something the Yemeni government has refused to do. Leader of the Houthis, Abdul-Malik Al-Houthi, warned in a speech on 7 December 2022 that his group would respond to any escalation with "more force and ... more effectiveness"

Since the outbreak of the Russian-Ukrainian war and the boycott of Russian oil, European countries have been trying to find alternatives to Russian oil, turning to the Gulf region, which is the best alternative in terms of abundance and infrastructure. Furthermore, Italy and Germany have secured new deals with Qatar, and France has done the same with the UAE. The matter is not limited to oil, but there are understandings of cooperation between Europe and the Arab Gulf states regarding clean energy as an extension of the previous agreements on green hydrogen between the European Union, Saudi Arabia, and the UAE.

Relations between East and West depend greatly on the stability of maritime navigation through the Strait of Hormuz and Bab al-Mandab due to their central geographical location and the junction between Europe, Asia and Africa. Many countries in the west also depend on trade relations with the Arab region, especially the Arab Gulf countries.

Today, the world is witnessing an economic recession that has forced many superpowers to rethink their geopolitical orientation. Although the U.S. administration, for example, has decided to withdraw gradually from the Middle East, the economic repercussions will force it to reconsider the stability in the region and Yemen in particular. Several European countries are already engaged in a race to secure the international trade lines and promote their leading role in maritime navigation on these crucial shipping lanes.

Economic estimates indicate that the gross national product of the Red Sea region will more than triple by 2050, from $1.8 trillion to $6.1 trillion. Despite this potential, economic forecasts based on current data indicate that investment in global trade security through the Persian Gulf will not increase much during the coming decades due to the instability of the region. This could change dramatically if there are joint efforts to secure the region, increasing the volume of global trade through the Red Sea and Bab al-Mandab Strait to more than five times its current level, from $881 billion to $4.7 trillion by 2050. 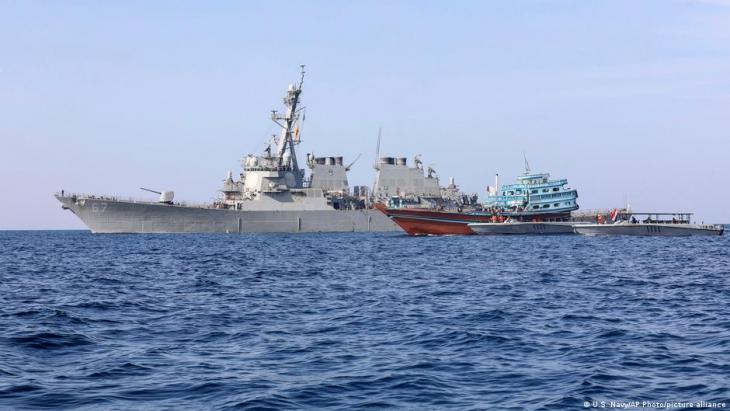 Iran denies supplying the Houthis with weapons: a Saudi-led military coalition that has been fighting the Houthis allied with Iran in Yemen since 2015 has repeatedly accused Iran of supplying the group with weapons, something Tehran has denied. In 2019, Amnesty International accused the UAE – a former member of the Saudi-led military coalition – of supplying weapons to Yemeni militias suspected of war crimes. In the same year, the U.S. military in the Middle East made the same accusations against Saudi Arabia. Most recently, on 3 December 2022, the U.S. Fifth Fleet announced that its forces had intercepted a fishing vessel in the Gulf of Oman along a sea route from Iran to Yemen that was smuggling more than 50 tonnes of ammunition, fuses used in weapons and rocket propellant

The West must address the root cause of the problem

Despite these initiatives, the Western world is dealing with the symptoms, not the root cause. The simplest solution would be to adopt the strategy known as the upstream theory, which traces the symptoms back to the origin of the problem. The paradox here is that China is fully aware of the importance of this region. It is seeking to restore its global clout through the Chinese Belt and Road Initiative, investing in Djibouti, and implementing massive infrastructure projects there as it prepares to impose itself gradually on the region, while specifically undermining the opportunities of the United States.

Rather than forming more initiatives and expending millions and much effort in protecting commercial shipping lanes, concerned leaders – those in Europe in particular – should devote their efforts to supporting the Presidential Leadership Council and the legitimate government that represents the entire Yemeni political and social spectrum, thereby enabling it to impose control and establish security and stability along the Yemeni coastal strip. At the same time, this would limit the Houthis and their military capabilities, which have recently been involved in the undeclared Iranian war on the energy infrastructure, facilities, ports, and oil tankers in international waters.

Evidence exists and solutions are on the table. Can European countries deal with the root causes of the problem, or will they continue to waste more time dealing with the symptoms?

Muammar Al-Eryani is minister of information, culture and tourism for the internationally recognised Yemeni government.

Since returning to power in Afghanistan, the Taliban have steadily eroded the rights and opportunities of women and girls, particularly their access to education. But Afghans are ... END_OF_DOCUMENT_TOKEN_TO_BE_REPLACED

The book "The Invention of the Maghreb: between Africa and the Middle East" prompts us to review basic terminology. This includes terms that we use almost every day as if they are ... END_OF_DOCUMENT_TOKEN_TO_BE_REPLACED

Tunisia has been going through a severe economic and political crisis in recent years. More than one in three young people there are unemployed. For many skilled, qualified and ... END_OF_DOCUMENT_TOKEN_TO_BE_REPLACED

At the end of every year, the team at Qantara.de gives you a run-down of the ten most-read articles on the site over the past 12 months. Here is a quick overview of the stories ... END_OF_DOCUMENT_TOKEN_TO_BE_REPLACED

The government in the Netherlands, one of the last European nations to abolish slavery, has made an historic apology. But some feel that there is still a long way to go. By Ella ... END_OF_DOCUMENT_TOKEN_TO_BE_REPLACED

To celebrate the bicentenary of the deciphering of the Rosetta Stone, the British Museum is running an exhibition entitled "Hieroglyphs: unlocking ancient Egypt" until February ... END_OF_DOCUMENT_TOKEN_TO_BE_REPLACED
Author:
Moammar Al-Eryani
Date:
Mail:
Send via mail

END_OF_DOCUMENT_TOKEN_TO_BE_REPLACED
Social media
and networks
Subscribe to our
newsletter