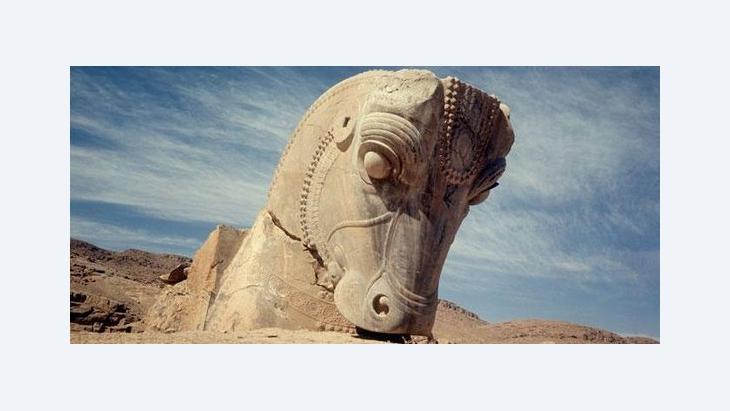 Iran and the Legacy of the Persians

Esfandiar Rahim Mashaei, an Ahmadinejad loyalist, is trying to inspire Iranian society with new ideas. To do so, he is plundering Iran's pre-Islamic history. Why is it that every year, more and more Iranians come to Persepolis, the ancient city of the Persian Empire? Is it pride? Is it nostalgia? Elisabeth Kiderlen investigates

The sun is setting. From every corner of the vast palace complex of Persepolis, visitors stream towards the exit, leaving behind the high pillars, the reliefs of bulls, lions and kings, the wide flight of steps with the frieze showing the emissaries of twenty-three tributary peoples bearing gifts for Darius the Great, King of Kings: camels and sheep, pitchers, swords, horses, jewellery and robes. Above the enormous terrace, hewn into the dusky pink cliff face and inaccessible to mere mortals, are the rock tombs of Artaxerxes II and III, and above the relief images of the Achaemenid kings hovers Ahura Mazda, the "wise god" of the Zoroastrians.

The people of the ancient Persian Empire, which in 500 BC stretched from the Indus as far as Libya and the Black Sea, are believed to have celebrated the Persian New Year festival at Persepolis with their ruler. In recent years, modern Iranian families have also started to gather here to celebrate Nowruz, the festival that marks the start of spring, camping on the roadside for miles around. Some 100,000 people visit Persepolis every year. Twenty years ago it was around 8,000.

The cradle of human rights?

It is a regular pilgrimage. But what is the purpose of the journey? Are the visitors seeking to reassure themselves that they are the descendents of a once powerful, cultivated, superior people that governed a large part of what was then the known world? Is it to ease the mortification of no longer being accorded a place among the important nations of the world? Is it an expression of pride in their royal ancestors, who did, after all – and this is something visitors are told repeatedly and with enthusiasm – "invent" human rights?

"My son," Darius wrote in his testament, "pray always to God, but never force anyone to follow your faith. Always bear in mind that all people should be free and may follow their own faith and conviction." 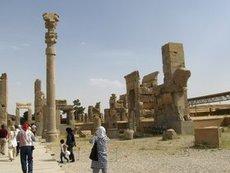 Pilgrimage to Persepolis: since the 1990s, Achaemenid kitsch has been booming in Iran; now, however, the site has become a highly political symbol for many different groupings

​​Visiting the resting place of the ancient kings certainly seems to be a demonstrative gesture and, as has recently become apparent in the quarrel between the orthodox clergy and the government of Mahmoud Ahmadinejad, Persepolis is once again a crystallisation point for controversial views.

The Islamic Republic of Iran in the thirty-second year of its existence: all over the country houses are being built on the outskirts of towns both big and small. The idea is that new, inexpensive apartments will balance out the trenchant cuts in subsidies for bread, electricity and petrol, and will make it possible for young couples to start a family. High unemployment – officially 15 percent, though experts believe this figure is far too low – remains a pressing problem. Only last March the Ahmadinejad government declared that it had created 2.5 million new jobs; now the Employment Minister has had to admit to parliament "that this intention exists, but there are some problems".

Paralysing battle instead of breaking taboos

However, what is more significant than the bad economic situation is the lack of exciting new ideas, the inability of the clerical nomenklatura to propose new objectives, ones for which people would be prepared to be patient and make sacrifices. Instead, the orthodoxy is fighting a paralysing battle to maintain its hard-won position. 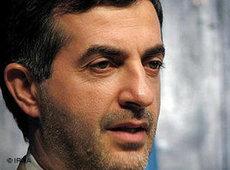 Loathed by Iranian conservatives, Esfandiar Rahim Mashaei (Ahmadinejad's chief of staff) is playing with Iran's pre-Islamic past in an attempt to bring people over to the government's side

​​One man has realised how dangerous this intellectual wasteland could be for the regime, and he has now become one of the figures most hated and feared by the conservatives: Esfandiar Rahim Mashaei, President Ahmadinejad's friend and chief of staff. Should a theocracy, of all forms of government, be permitted to rely solely on practical power – in this case, armed troops and the secret service – and do without spirituality and visions for the future? At present, the Green Movement is seen as representing people's dreams of a better future, and the Sufis, who are also combated by the orthodoxy, as the locus of spirituality.

Mashaei is feeling his way towards filling the ideological gap with a mixture of rationality and re-ideologisation. He has declared political Islam to be obsolete and its most important symbol, the hijab or veiling of the female body, to be a woman's free decision. Statements like these are taboo. He has also breached a second taboo by declaring himself and the Iranian people friends of the people of America and Israel.

Persepolis and its pilgrims

All this is not entirely new: Ahmadinejad has expressed similar ideas in passing on several occasions. Once he explained that the government had more important things to do than to concern itself with the correct positioning of headscarves; another time he wanted to lift the ban on women attending football games in the stadium. But the concerted anger of the orthodox clergy and a clear directive from the most senior religious leader, Ali Khamenei, compelled him to get back in line. His epic letters to George W. Bush and Angela Merkel must, of course, also be seen as an attempt to overcome his country's isolation. 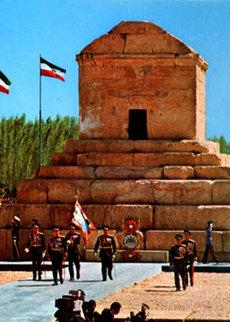 ​​Mashaei, however, dares to go further. He places nationalist themes in the foreground and tries to stir up patriotic feeling. As one would expect, Iran's pre-Islamic past plays a large part in this and with it, of course, Persepolis. So is Mashaei trying to play on Iranians' nationalist sentiments and draw the growing number of Persepolis pilgrims onto the side of the government? And does the status of the ancient Achaemenids as world leaders lend itself to use as a propaganda tool for contemporary Iranian ambitions of becoming a world power?

This has been tried before, namely by the Shah in the 1970s. In a little wood opposite the entrance to Persepolis stands a host of rusted tent frames, erected by the Shah in 1971 to shelter the one thousand guests he invited to celebrate the anniversary of the establishment of the Persian Empire 2,500 years earlier. Mohammed Reza saw himself as a direct descendent of the Achaemenid dynasty, whose global empire was toppled in 331 BC by the Greek upstart Alexander.

In Pasargadae, not far from Persepolis, the Shah saluted before the entrance to the modest crypt of Kyros and called into the empty tomb, "Sleep soundly, Kyros; I am on guard." Meanwhile his arch-enemy, Ayatollah Khomeini, mocked and poured scorn on the ruler who was serving fried peacocks' tongues to international royalty and heads of government while his people lived in poverty. To cap it all, in 1976, the Shah introduced the sun calendar, which no longer took as its starting point the Hijra of Mohammed from Mecca to Medina but the coronation of Kyros the Great. Three years later the revolution swept the Shah away. 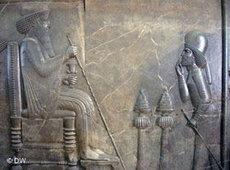 According to Esfandiar Rahim Mashaei, "the Islam of the Iranians is different and enlightened and will shape the future"

​​Persepolis and the glorious pre-Islamic past have resonated powerfully in Iranian society since it was excavated in the mid-twentieth century. In 1979, shortly before the revolution, UNESCO declared the ruins of the city a World Heritage Site. Citizens with nationalist inclinations are stimulated by the glory of the Achaemenids, but the pious and the clergy are more inclined to regard the site with its Zoroastrian associations as the locus of evil. This was why, after the revolution, the so-called "hanging judge" Ayatollah Khalkhali planned to blow up Persepolis to liberate the country from all pre-Islamic devilishness. This, however, was prevented by a combination of resistance from the residents of nearby Shiraz, who did not want to lose their income from tourism, and the influence of moderate clerics.

From a rarely visited tourist attraction to Achaemenid kitsch

In the 1990s, Persepolis still lay deserted. Apart from the few rare foreign tourist groups that wandered across the ruined landscape, clad in peculiar drapes and with their headscarves askew, it did not occur to anyone to visit Persepolis. The director sat in his office before a photo of the revolutionary leader Khomeini, his walls papered with suras from the Koran and the hand of Fatima to fend off the evil eye, and wished himself far away from this unedifying place. Nonetheless, the measures to preserve the archaeological marvel that were initiated under the Shah continued, albeit with no particular urgency or hurry.

During the period when the liberal President Khatami was in power (1979–2004), tourism started to pick up again. Travellers marvelled at the beauty of the pre-Islamic palaces, or what was left of them after Alexander's armies burned them down in 331 BC, and the magnificence of the mosques of Isfahan. The nomenklatura seemed to have made their peace with the ancient ruins; an elaborate tourist walk was created, and an awning was built to protect the reliefs.

Increasingly, restaurants in Tehran are being decorated with figures of lions, bulls and guards from Persepolis. Achaemenid kitsch is booming, as is the sale of posters depicting the "Testament of Darius" as the first formulation of human rights. And now, suddenly, it looks as though the topic of Persepolis is being politicised once more.

Symbol of the current power struggle

If Mashaei were to have his way, nationalist sentiment and patriotism would offer a way out of what has become a dull-edged, lacklustre political Islam. The chief ideologue is even trying to cast religion in a nationalist light: "The Islam of the Iranians is different and enlightened and will shape the future," he is quoted as saying. The rationale behind this is that when Islam was brought to Iran in the mid-seventh century by the Arab army, it encountered a highly cultivated and educated civilisation, and that this also explains why the amalgam of society and religion differs on either side of the Gulf – which is Persian to the Iranians and Arabian to the Arabs.

The power struggle between the custodians of a universally applicable Islam and the propagandists of particularistic nationalism is taking place in the same – conservative – camp. Yet it looks as if Ahmadinejad and his allies are trying to drive the clerics out of politics. The clerics are defending themselves by attacking Mashaei in particular. "A very dangerous person who wants to install a new cult," writes one hard-line newspaper. It also calls for the "deviationist" to be arrested. Men in the president's inner circle have already been imprisoned.

In this respect Persepolis, that great Iranian legacy, is like a compass: all the opposing camps use it as a reference point as they constantly adjust their positions.

Home
Print
Newsletter
More on this topic
Ahmadinejad and Iran's Supreme Leader: Showdown in TehranInterview with Nader Hashemi: ''The War of Ideas in Iran Is Over''Power Struggle in Iran: The Might of Oil
Related Topics
All Topics
Date:
Mail:
Send via mail

END_OF_DOCUMENT_TOKEN_TO_BE_REPLACED
Social media
and networks
Subscribe to our
newsletter