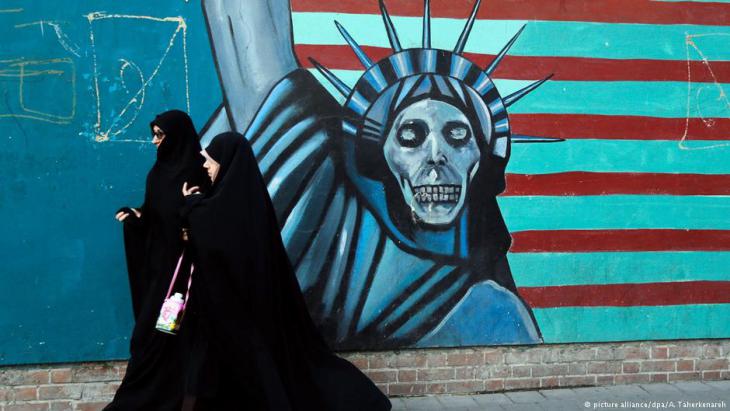 Iran and the USA
Trump's UN debut: The axis of evil is back

The USA no longer accepts the nuclear agreement with Iran in its current form and instead wants to renegotiate elements of the international treaty. President Hassan Rouhani now has to manoeuvre between Trump and the radicals at home – hoping all the while that Europe will act as mediator. A commentary by Ali Sadrzadeh

A pleasant voice simultaneously and skilfully translates Trump′s speech to the United Nations Assembly into Persian. At first. But as Trump then begins to criticise Iran, the interpreter becomes audibly flustered. What the U.S. President is saying is not fit for broadcast on the country′s state-run television station.

No matter how the interpreter tries to recast and modify his words, it is just not possible to translate Trump′s rant faithfully. "The Iranian government masks a corrupt dictatorship behind the false guise of a democracy. It has turned a wealthy country with a rich history and culture into an economically depleted rogue state whose chief exports are violence, bloodshed and chaos." What is an interpreter for Iranian television to make of this and similar sentiments? What will happen after the broadcast?

The interpreter at first chose the next best thing, namely to remain silent. But the Iran passage in the speech was too long to simply ignore. There thus followed some meaningless phrases and ridiculous word fragments. Nor could Trump′s speech be read in its entirety on websites or newspapers in Iran. Trump had insulted and badmouthed the country – that was the line taken by one and all, including the newspapers of the reformers. 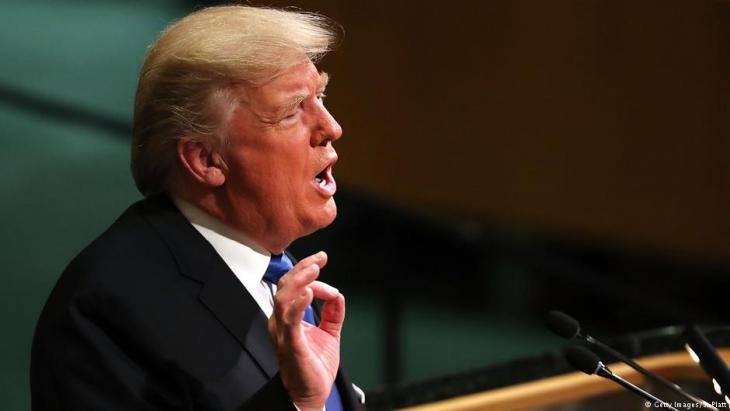 Harsh words for Tehran: U.S. President Trump has accused of Iran of breaching the tenor of the nuclear treaty by conducting rocket tests. In signing the agreement Iran committed to drastically reducing its uranium enrichment programme. In return, there would be a gradually lifting of the international economic sanctions imposed on the country. Trump is due to inform U.S. Congress on 15 October whether he intends abiding by the nuclear treaty or not

Only the Revolutionary Guard dared state the truth

Only one voice danced out of line: the website of the newspaper Javan. It is operated by the Revolutionary Guards and is addressed to a selected audience: the Guardsmen and their families or staunch supporters. A few hours after the speech, Javan printed – faithfully and correctly translated – everything Trump had said about Iran. Nothing was left out, nothing watered down.

The Revolutionary Guards′ fidelity to the truth has a background in realpolitik. Just a few hours after the speech, the commander of the Revolutionary Guard Corps, Ali Jafari, appeared before the press and demanded a total revision of Iran′s policy towards the USA. He called on President Rouhani in New York to get even with Trump for his abusive tirade. At the end of his short statement, the General thanked Trump for showing America′s true colours and added: "A painful response is under way, which he will be feeling in the coming days."

Rouhani, for his part, maintained a conciliatory and moderate tone in his speech before the UN. At a press conference afterward, he stated in no uncertain terms that the nuclear agreement was no longer negotiable and urged the Europeans to put pressure on the USA to abide by the agreement as Iran is doing.

Yet, the USA appears more interested in the "spirit" of the agreement than in its actual terms. Despite being forced to acknowledge that Iran has so far fulfilled the agreed requirements, Secretary of State Tillerson once more accused Tehran of threatening the security of the Middle East. The expectation that the Iranian government would make a contribution to peace in the region was a natural extension of the nuclear treaty, Tillerson said. 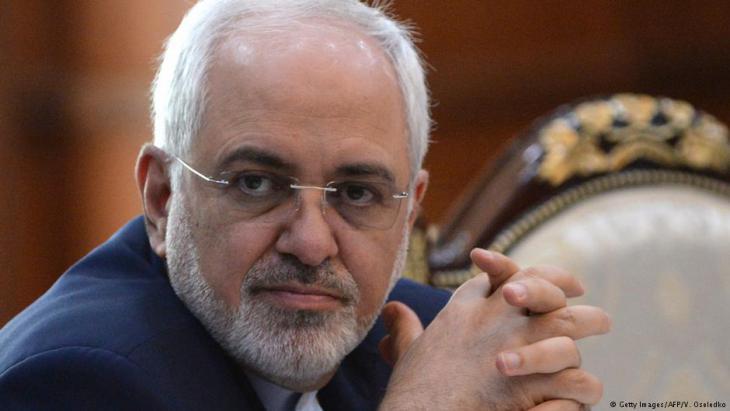 Iranian-American relations in the deep freeze: following Trump′s speech in front of the United Nations Assembly, Iran′s foreign minister, Mohammad Javad Zarif accused the U.S. administration of lacking reliability. In an interview broadcast by CNN, Zarif claimed that not only was Washington "unpredictable", but "unreliable" as well. He added that the USA alone could not topple the Iran deal. Only the International Atomic Energy Agency (IAEA) is authorised to verify whether or not the terms of the agreement are being adhered to

It′s all about the "spirit of the agreement". And it is indeed difficult to uncover a fitting spirit in a document bearing the cumbersome name of "Joint Comprehensive Plan of Action".

Ayatollah Ali Khamenei, Iran′s supreme clerical leader, is also trying to discern this spirit. Both sides have been familiar with the subject matter for two years, but each has its own notion of what exactly the spirit behind it is supposed to look like. Tillerson speaks of Iranian missile tests and the country′s role in the conflicts in Syria, Yemen and Iraq. And Khamenei, the omnipotent man in Tehran, repeatedly charges the USA with not upholding its end of the agreement and continuing to tighten its sanctions against Iran.

The moderate Iranian president has been looking for a way to mediate between Trump in Washington and the radicals at home and believes he has found a solution: Europe should step in and save the day. He met in New York with the French president, the British prime minister and many other European diplomats and all promised him they would abide by the agreement.

The French oil and automotive companies have invested billions of dollars in Iran since the treaty was signed. One day after Trump′s address in New York, the British energy group Quercus signed a contract with the Iranian energy minister for a gigantic solar project, the sixth largest of its kind worldwide. 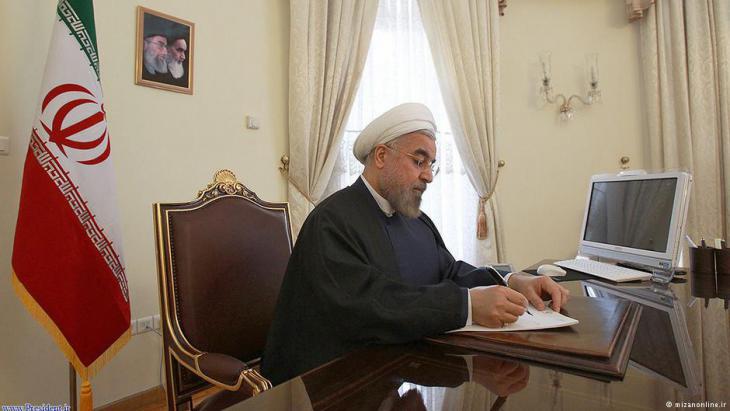 Between a rock and a hard place: "the moderate Iranian president has been looking for a way to mediate between Trump in Washington and the radicals at home and believes he has found a solution: Europe should step in and save the day. He met in New York with the French president, the British prime minister and many other European diplomats and all promised him they would abide by the agreement," writes Ali Sadrzadeh

And yet the Europeans, despite their own interest in the agreement, are still keeping a back door open. Emmanuel Macron in particular, who spoke with Rouhani for over an hour after Trump′s speech, subsequently made it clear that he wants to meet the Americans halfway and negotiate on adding more elements to the treaty. Macron also insisted that Iran would have to change its behaviour in Syria. He even offered to act as mediator between Iran and the USA, reported the New York Times recently.

Trump plans to present his final decision to the world on 15 October. He will most likely demand that the expiration clause of the agreement be changed, but above all that Iran must take a new direction with regard to Syria, Iraq and Lebanon. Iran′s President Rouhani can already guess what he is up against. At his press conference, he said the agreement was like a building: if you pull out a load-bearing element, the whole thing comes crashing down. And Iran will not be prepared or able to change its regional policy so easily.

Either way, Rouhani and the many governments that may follow are facing further years of negotiations – coupled with continued US sanctions. We′ve landed right back where we started.

It′s hard to predict who will demonstrate more staying power. The reality, though, is that this setback spells the further decline of the Iranian economy and an increase in power for the radicals. Caught in the crossfire is a population of 80 million who for the most part are simply yearning for better days – and nobody trusts either the leaders at home or those abroad anymore.

Since returning to power in Afghanistan, the Taliban have steadily eroded the rights and opportunities of women and girls, particularly their access to education. But Afghans are ... END_OF_DOCUMENT_TOKEN_TO_BE_REPLACED

The book "The Invention of the Maghreb: between Africa and the Middle East" prompts us to review basic terminology. This includes terms that we use almost every day as if they are ... END_OF_DOCUMENT_TOKEN_TO_BE_REPLACED

Tunisia has been going through a severe economic and political crisis in recent years. More than one in three young people there are unemployed. For many skilled, qualified and ... END_OF_DOCUMENT_TOKEN_TO_BE_REPLACED

At the end of every year, the team at Qantara.de gives you a run-down of the ten most-read articles on the site over the past 12 months. Here is a quick overview of the stories ... END_OF_DOCUMENT_TOKEN_TO_BE_REPLACED

The government in the Netherlands, one of the last European nations to abolish slavery, has made an historic apology. But some feel that there is still a long way to go. By Ella ... END_OF_DOCUMENT_TOKEN_TO_BE_REPLACED

To celebrate the bicentenary of the deciphering of the Rosetta Stone, the British Museum is running an exhibition entitled "Hieroglyphs: unlocking ancient Egypt" until February ... END_OF_DOCUMENT_TOKEN_TO_BE_REPLACED
Author:
Ali Sadrzadeh
Date:
Mail:
Send via mail

END_OF_DOCUMENT_TOKEN_TO_BE_REPLACED
Social media
and networks
Subscribe to our
newsletter