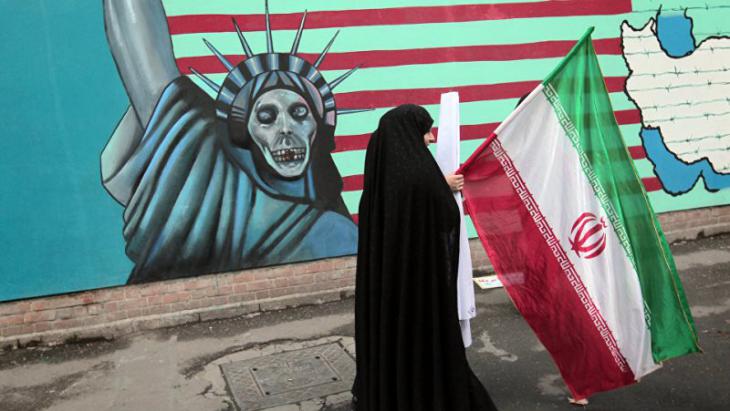 Iranʹs dangerously powerful image among its adversaries in the region reflects not only the decline of the USA, but also the Islamic Republicʹs success at eluding Western influence since 1979. By Charlotte Wiedemann

Whole peoples wriggling helplessly, like marionettes on strings: this is how Iranian propaganda has always presented U.S. politics. But the "Big Satan" looked fiercer than the mustard-blonde neʹer-do-well of the present day. What's more, the Iranian chant "Marg bar Amrika! – Down with America!" seems to have become a self-fulfilling prophesy.

Political pundits are currently postulating the end of the American era, the decline of which has been closely linked – for almost four decades – to events in Iran. Indeed, Iran may be said to have made an active contribution to its downfall. At first, the impact was merely symbolic: the spectacular taking of U.S. diplomats hostage in November 1979 humiliated a hitherto almighty-seeming superpower for a whole 444 days. The debris left behind by an amateurish liberation attempt (with an erratic flight and helicopter crash) can be visited today by tourists in the Iranian desert: the ruins of a derelict contemporary history.

Unlike that in Vietnam with its numerous casualties, the USA has never recovered from this defeat. Politicians have always been able to win votes with war rhetoric against Iran. This emotional fixation on a favourite political enemy can be found much less frequently amongst the Iranian people, many of whom secretly love Amrika.

Over the past decade and a half, Iran has been able to expand its influence in the Middle East thanks to U.S. policies that have inflicted disaster upon disaster there, chief among them the invasion of Iraq. The nostalgia with which commentators in Iran are now sounding the death knell of the former "order" of the American era and its "reliable politics" seems strangely Eurocentric.

The said "order" is what has led to the great disorder in the Middle East today, leaving millions dead in its wake as the "war on terror" set the world on fire. For Iran, these missteps by the USA were stepping stones to its own ascent to a moderate power, all the way to the negotiating table in Vienna.

The Islamic Republic has borne up relatively well under long periods of isolation, despite all the suffering of its population. If Iran appears to its regional adversaries as being dangerously powerful today, this reflects both the decline of the USA and Iran's success at eluding Western influence since 1979. Discounting any religious attributes, this development can serve as a model for other emerging countries. 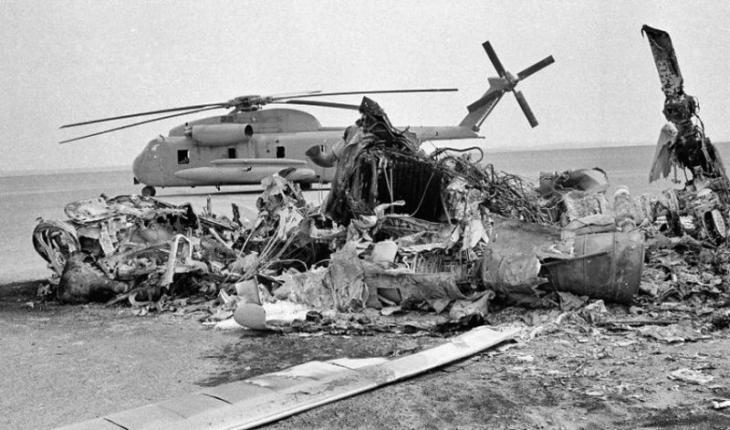 Jimmy Carterʹs disastrous "Operation Eagle Claw": In 1980 the U.S. military launched an operation to free the American hostages from the U.S. embassy in Tehran. In poor visibility a helicopter and a cargo plane collided over desert some 600 kilometres from Tehran. The American troops were forced to abandon military equipment and secret service documents in the sandy terrain – a military debacle for the United States

The parallelism of Trump's summit with Kim Jong Un on the one hand and the breach of the nuclear agreement with Iran on the other holds lessons not only for Tehran, but also for alert observers in the global South.

Firstly: Iran is being punished for not having taken its nuclear programme as far as North Korea did. The Revolutionary Guards have put it this way: Gaddafi was toppled after abandoning his nuclear programme. From this, North Korea learned that it should first build bombs and only then signal a willingness to talk.

Secondly: the duplicity of the West on the subject of human rights is so blatant that it is no longer even worth mentioning.

Thirdly: Western business interests are leading policy-makers by the nose. First they let Europe's politicians roll out the red carpet for them in Iran, and now they are voting with their feet, while Europe's diplomats are still wringing their hands. The Americans are simply making more money. Change through trade? An idea whose time is long past.

The West is now naked, having long forfeited the soft power and its undermining influence that Tehran always feared the most. The Supreme Leader can rest assured that the shutters have gone down on the shop window where Western values and lifestyles were once displayed to enticing effect. 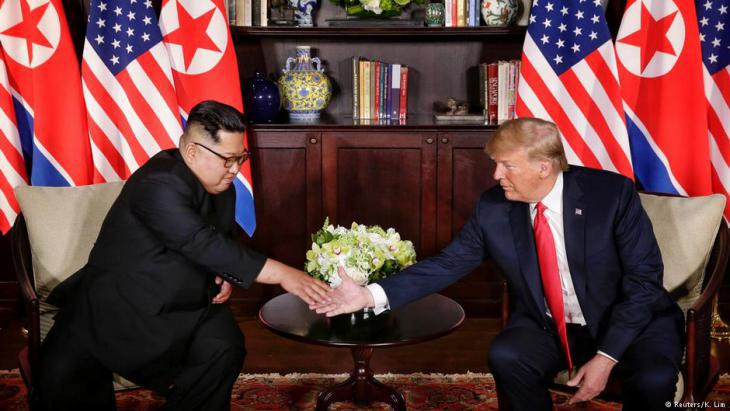 The parallelism of Trump's summit with Kim Jong Un on the one hand and the breach of the nuclear agreement with Iran on the other holds lessons not only for Tehran, but also for alert observers in the global South. Firstly: Iran is being punished for not having taken its nuclear programme as far as North Korea did. The Revolutionary Guards have put it this way: Gaddafi was toppled after abandoning his nuclear programme. From this, North Korea learned that it should first build bombs and only then signal a willingness to talk

Another aspect of this ideological decline is how the International Atomic Energy Agency has been devalued. It has confirmed in no fewer than ten reports that Iran is fulfilling its obligations under the nuclear agreement – but this fact is merely seem as incidental. Iran's advice to North Korea not to trust treaties is only logical.

So far, the Islamic Republic has reacted calmly to the new situation, at least outwardly. On the domestic scene, however, the fear of sanctions has triggered economic turbulence and the rial is falling. And thus the picture of an Iran that is strong in terms of foreign policy is joined by another: an economically and politically shattered country whose sandstorms have both ecological and metaphorical significance.

U.S. policies draw equally on both pictures. They rely on demonising the country, letting Israel's Benjamin Netanyahu with his Hitler comparisons set the tone: Iran is supposedly a threat to the whole world. At the same time, U.S. Secretary of State Mike Pompeo gives the impression that Iran can be brought to its knees economically, strangled until it changes its regime.

Anyone who knows anything about Iranian national pride will realise how far from reality this notion really is – irrespective of all the social protests that are in the meantime the order of the day. Iran has already experienced regime change, the overthrow of Prime Minister Mohammad Mossadegh in 1953 staged by the British and the Americans – an event so present in the minds of all Iranian political camps and generations that it may as well have happened yesterday.

So anyone who speaks of regime change is actually asking for war. And hoping that Tehran will be cornered, making a false move to supply a pretext for attack. But why war? Sparking a war merely to drive business would be peculiarly fitting as the profane end of the American era. Trump wants to sell Saudi Arabia over 700 billion dollars' worth of weapons; for the deal to succeed, the Iran hysteria must be stoked and every gesture of appeasement avoided.

Is that really what it all comes down to? Pressure from outside is in any case more likely to merely shore up the Iranian system. This was confirmed recently from a surprising quarter. Ardeshir Zahedi, the elderly foreign minister from the days of the Shah, responded to Mike Pompeo in the New York Times, saying that whatever Iranians may think about their current government – "under outside threats, Iran’s noble people always stand together and help defend their homeland."

Home
Print
Newsletter
More on this topic
U.S. policy on Iran: Middle East nightmare – made in WashingtonU.S. policy on the Middle East: The imperial reflexDeal drop triggers power struggle in Iran: Trump gifts the hawks of Tehran
Related Topics
Donald Trump, History of the Near and Middle East, Iranian nuclear programme, Islam and the West, Islamic Revolution of Iran, U.S. policy in the Middle East
All Topics

Since Ali Khamenei, Iran's most powerful man, has openly and unconditionally come out in support of Putin's war in Ukraine, logistical help is on its way, with an allegedly ... END_OF_DOCUMENT_TOKEN_TO_BE_REPLACED

Tourists have been returning to Tunisia, Egypt and Morocco. But, given the global uncertainty caused by the Ukraine war, will the comeback be enough to save a struggling sector, ... END_OF_DOCUMENT_TOKEN_TO_BE_REPLACED

The highly controversial Indian blockbuster "The Kashmir Files“, on the exodus of Kashmiri Hindus in the 1990s, is characterised by unilateral representations, negative ... END_OF_DOCUMENT_TOKEN_TO_BE_REPLACED

"Flugt" is the world's first museum dedicated to the stories of those forced to flee. The new museum, which focuses on the fates of refugees then and now, is housed in a former ... END_OF_DOCUMENT_TOKEN_TO_BE_REPLACED
Author:
Charlotte Wiedemann
Date:
Mail:
Send via mail

END_OF_DOCUMENT_TOKEN_TO_BE_REPLACED
Social media
and networks
Subscribe to our
newsletter