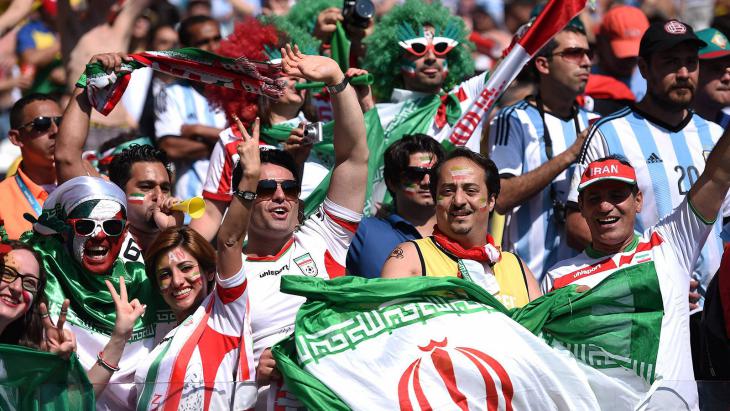 Iran at the 2018 FIFA World Cup
Battling on several fronts

Iran's participation in the 2018 Football World Cup in Russia – the fifth time the nation has taken part in the competition – should be a joyous occasion for soccer-mad Iranians. But foreign sanctions and domestic restrictions are subduing the celebratory mood. Farid Ashrafian reports

"Team Melli", as the Iranian national soccer squad is called in the Persian language, qualified back in May 2017 alongside Russia and Brazil as one of the first three of a total of 32 teams for the 2018 World Cup.

Participation in the World Cup is an incomparable highlight for this nation, recently dogged yet again by negative headlines due to global political events. It is hoped that football can fix something that international diplomacy has thus far not managed to achieve, namely regain international recognition for the nation as a full and accepted member of the global community.

Most Iranians are mad about soccer and have been following the 2018 World Cup with a passion. They hope that despite the challenging group constellation with opponents Morocco, Spain and Portugal, the team will survive the group stage and make it into the knock-out phase of the competition for the first time. But domestic barriers as well as international sanctions hover like a perpetual spectre of doom over "Team Melli" and its fans.

Ban on gatherings instead of public viewing

It may sound incredible, but the reality is bitter: in advance of the World Cup, rulers in Iran imposed a ban on gatherings in all places during matches contested by their own national team. Whether in a restaurants, cafes or on the street: public communal viewing of matches involving Iran on television or projector screens is forbidden.

As the public order official responsible for security in Tehran, Mohsen Hamedani, announced to domestic media: "Investigations by city authorities came to the conclusion that broadcasting World Cup matches in public parks and other grounds is inappropriate." He went on to say that "this decision was taken in consideration of cultural and social aspects."

In view of recent sporadic public protests and rallies against the theocratic regime, it is more than doubtful whether the football-crazy Iranians will respect this ban, which is untenable under Iranian law. 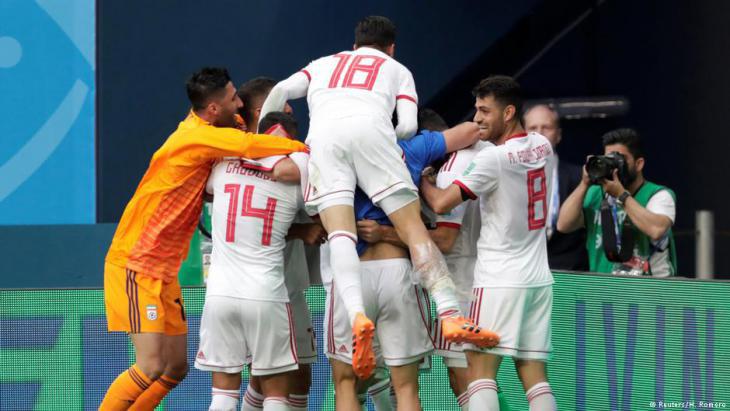 Team Melli off to a good start by default: during their first round match against Morocco on 15 June, the Iranians emerged victorious – thanks to a Moroccan own goal during extra time

No shoes for the national squad

Furthermore, foreign-policy developments have presented the Iranian squad with an unusual problem. Immediately prior to the start of the World Cup group stage, sportswear giant Nike announced it would no longer be providing cleats to the Iranian national team. The U.S. company said its decision was due to the renewed imposition of U.S. economic sanctions against Iran and Washington's withdrawal from the international nuclear deal with Tehran.

This surprise move was met with furious indignation by Iran's national coach Carlos Queiroz, himself a Portuguese national: "The players get used to their kit. It's unacceptable to change this a week before important matches like these. Nike should apologise to the Iranians," he ranted.

Iranian national players who play in foreign clubs were forced to ask their team mates for help – first and foremost Saman Ghoddous, who grew up in Sweden and plays there for the club Ostersunds FK. Others had to purchase the necessary shoes in Russian sports stores at the last minute.

Football as outlet for freedom and democratisation

Yet, despite domestic and foreign restrictions, the mega event that is the 2018 World Cup has got football-crazy Iranians all over the world hooked. Thatʹs because soccer means so much more to them than just sport and diversion.

After the national team qualified for the 1998 Soccer World Cup, Iranian football played a significant role in the country's democracy movement. At that time, hundreds of thousands of Iranians gathered on the streets of the nation experienced a revival of their national sense of self-worth, held in check ever since the Islamic Revolution. Ever since, the theocracy has taken a dim view of any public gatherings connected to sport. After all, events of this kind frequently become a vehicle for the expression of public displeasure that is supressed in other areas of society.

In these currently turbulent times for Iran, both nationally and internationally, the World Cup is providing an exceptional platform for further social developments. Watch this space.

In her latest exhibition in Japan, Farzaneh Khademian depicts figures who seem detached from their surroundings. In interview with Qantara.de, the Iranian photographer and painter ... END_OF_DOCUMENT_TOKEN_TO_BE_REPLACED

The catastrophic human rights situation in Bahrain is being largely ignored by the rest of the world. Despite all the damning evidence, which includes a Human Rights Watch report ... END_OF_DOCUMENT_TOKEN_TO_BE_REPLACED

Talks to salvage the 2015 Iranian nuclear deal have entered their eighth round in Vienna. Even if a deal is struck and some of the sanctions are lifted, the state of the Iranian ... END_OF_DOCUMENT_TOKEN_TO_BE_REPLACED

Every year in December, the team at Qantara.de takes a look back at the articles that proved most popular with our readers. This year is no different. Here is a run-down of the ... END_OF_DOCUMENT_TOKEN_TO_BE_REPLACED

Four musicians – two Iranian, two Indian – have created an album of music inspired by the poetry of Rumi. Like the poet's works, the album advocates tolerance, inclusivity and ... END_OF_DOCUMENT_TOKEN_TO_BE_REPLACED

END_OF_DOCUMENT_TOKEN_TO_BE_REPLACED
Social media
and networks
Subscribe to our
newsletter