Iran captain "supports" anti-government protests ahead of match against England 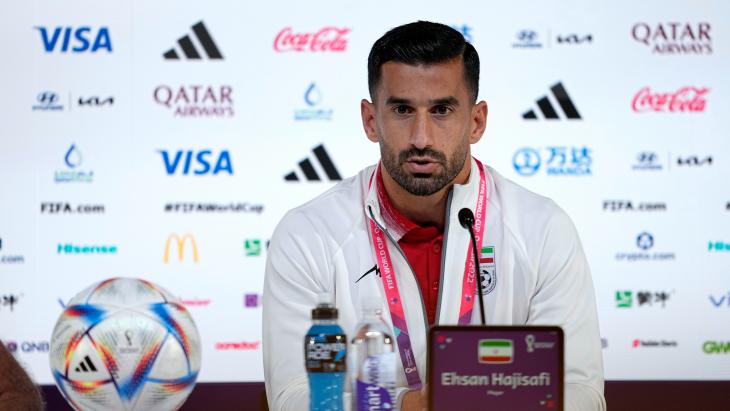 Iranian captain Ehsan Hajsafi said his team sympathised with anti-government protests at home and his team should be a voice for the oppressed at a press conference in Qatar a day ahead of the country's first World Cup match against England.

Hajsafi, an experienced defender began a press conference on the eve of Iran's World Cup opener against England by extending his sympathies to the loved ones of victims of the regime's deadly crackdown on anti-government protesters.

Unprompted, the 32-year-old defender opened the press conference with a remark on anti-government protesters in Iran. "They should know that we sympathise with them," he said, before adding, "conditions at home are not good".

More than two months of protests in Iran, sparked by the death of Mahsa Amini, a 22-year-old woman who died in custody, have created one of the boldest challenges to the Islamist regime since the 1979 revolution.

Iran's national team has been in the spotlight in the run-up to the World Cup in Qatar, with anticipation over whether players will use football's showpiece event as a platform to show solidarity with the protest movement.

"We have to accept the conditions in our country are not right and our people are not happy," said Hajsafi. "We are here, but it does not mean we should not be their voice or we should not respect them."

The wave of unrest erupted in September after Amini died in the custody of morality police for wearing clothes deemed "inappropriate". Iran's government blames foreign enemies for the crisis.

"Everything we have, we owe it to our people and we are here to work hard, to fight, to perform well on the pitch, to score goals and to dedicate ourselves to the people of Iran," he said. "I hope the situation changes as the people wish and that everyone will be happy."

The state's response has led to questions over whether the team represents Iran or the regime that has ruled with an iron fist since the Islamic Revolution of 1979.

Some Iranian sportsmen and women have made gestures seen by protesters as shows of support, including not singing the national anthem or celebrating victories on the field.

Other members of the team have avoided discussion of politics in public so far. Players Karim Ansarifard and Morteza Pouraliganji refused to answer questions on Friday about solidarity with women in Iran. On Thursday, midfielder Alireza Jahanbakhsh, who plays for Dutch club Feyenoord, suggested such questions were a ploy to distract the team.

However, Bayer Leverkusen striker Sardar Azmoun was selected for the team despite having publicly supported the protests in the past.

Some activists have taken a stand against the national team for not doing enough and called on Iranians to gather at main squares of cities and towns across Iran on Monday night.

A banner of Iran's national team was set on fire in Tehran, videos on social media showed.

Monday's match between Iran and England comes as Iran's clerical rulers launched a crackdown over the weekend in the country's Kurdish region, deploying troops and killing at least four demonstrators on Sunday, social media posts and rights groups said.

Reinforcements of security forces were sent to the city of Mahabad in western Iran, rights groups said, while images and audio of heavy gunfire and screams were posted overnight.

Rights groups had earlier posted footage of defiant protests in Mahabad, including after the funerals of victims of the state's crackdown on the protests, with people staging sit-ins in the streets and setting up barricades.

The Norway-based Hengaw rights group said "armed troops" had been despatched to Mahabad from Urmia, the main city of West Azerbaijan province.

Hengaw said at least four protesters were killed in the Kurdish area. "In Mahabad's residential areas, there is a lot of gunfire," it wrote on Twitter. The group posted footage of helicopters flying over Mahabad that it said carried members of the Revolutionary Guards sent to quell the protests.

The widely-followed activist account 1500Tasvir said a 16-year-old student and a school teacher were killed in the Kurdish city of Javanrud. The details could not be independently confirmed.

The very first protests took place in Kurdish-populated areas of Iran including at Amini's funeral in her home town of Saqez, before spreading nationwide.    (France24/AFP/Reuters)

More on this topic
Iran's players free to express themselves at World Cup, says QueirozAsef Bayat on the Iran protests: "A movement to reclaim life"Football in the Middle East: Freedom vs. oppression
Home
Print
Newsletter
MoreAll Topics

END_OF_DOCUMENT_TOKEN_TO_BE_REPLACED
Social media
and networks
Subscribe to our
newsletter