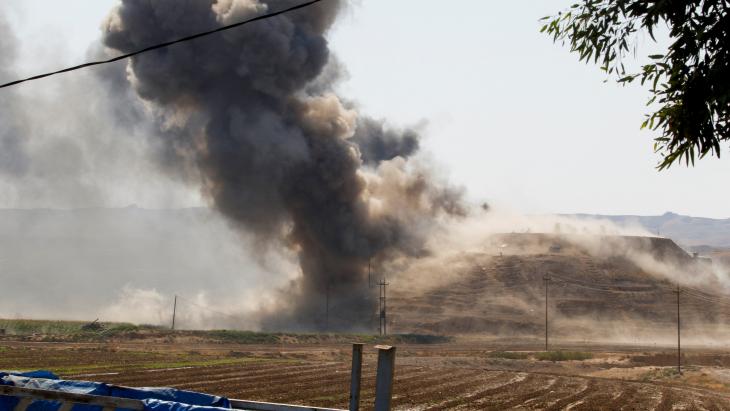 Iranian strikes on Wednesday targeting the bases of a Kurdish opposition group in northern Iraq that had condemned the crackdown on Iranian protesters killed at least nine people and wounded 32 others, according to Iraqi Kurdistan officials.

The strikes came as demonstrations continued to engulf Iran after the death of Mahsa Amini, a 22-year-old Iranian Kurdish woman who was detained by the Iranian morality police.

Iran’s attacks targeted Koya, some 65 kilometres east of Irbil, said Soran Nuri, a member of the Democratic Party of Iranian Kurdistan. The group, known by the acronym KDPI, is a leftist armed opposition force banned in Iran.

Iraq’s Foreign Ministry and the Kurdistan Regional Government have condemned the strikes. The UN mission in Iraq has also deplored the attack, saying "rocket diplomacy is a reckless act with devastating consequences".

"These attacks need to cease immediately," the UN mission said on Twitter.

The U.S. on Wednesday condemned "Iran’s use of ballistic missiles and drone attacks against the Iraqi Kurdistan Region as an unjustified violation of Iraqi sovereignty and territorial integrity," according to a State Department press statement.

The attacks came as Iranian police on Wednesday warned that they will confront "with all their might" the women-led protests that erupted nearly two weeks ago after Amini’s death in custody.

Amini’s parents have filed a complaint against the police who arrested their daughter, their lawyer said Wednesday.

The complaint was filed "against the perpetrators of their daughter's arrest" and the police who spoke with her following her detention, lawyer Saleh Nikbakht said, quoted by ISNA news agency.

The family has requested "a thorough investigation" into the arrest and the events that led to Amini's hospitalisation, the lawyer said, urging authorities to release "all videos and photographs" showing her in custody.

The lawyer said the head of the prosecutor's office "promised the case would be handled carefully and that all our requests would be taken into account", and that "a medical team appointed by Mahsa Amini's family would be informed" of any developments in the investigation.

Wednesday's strikes against the autonomous region of Iraqi Kurdistan prompted the federal government in Iraq to summon Iran’s ambassador.

Iran’s state-run IRNA news agency and broadcaster said the country’s Revolutionary Guard targeted bases of a separatist group in the north of Iraq with "precision missiles" and "suicide drones".

The Iranian drone strikes targeted a military camp, homes, offices and other areas around Koya, according to a senior KDPI member.    (France24/AP/AFP)

END_OF_DOCUMENT_TOKEN_TO_BE_REPLACED
Social media
and networks
Subscribe to our
newsletter