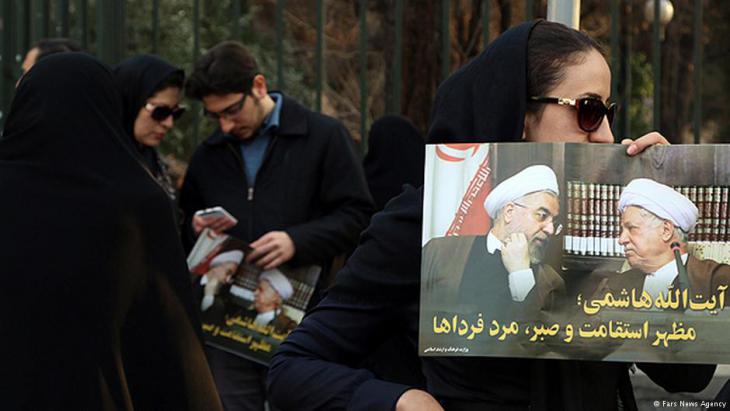 Now that Rafsanjani is gone, Iran's President Rouhani has lost his main advocate. In the impending conflict with US President Trump, Rouhani will have to manage without his mentor to keep the conservative hardliners in check, some of whom already see Trump's policies as confirming their distrust of the arch-enemy. By Ulrich von Schwerin

One month after the death of Akbar Hashemi Rafsanjani, his most significant legacy is at risk: Iran's rapprochement with America. Now that US President Donald Trump has imposed new sanctions in response to a provocative missile test by Iran's Revolutionary Guards, a further escalation is not the only consequence to be feared. The nuclear agreement to which Rafsanjani dedicated so much effort is also in danger. President Hassan Rouhani must now make do without the "Sheikh of Moderation", trying to keep hardliners in check who are just waiting for the next opportunity to deal the death blow to the hated treaty.

Rafsanjani was the key advocate of the nuclear deal, which in July 2015 resolved the dispute that had raged for many years over Iran's nuclear programme. Without his backing, his political protege Rouhani would hardly have been able to successfully conclude the negotiations, despite bitter opposition from the conservative camp. Even though the Ayatollah was politically weakened in his later years, he remained the eminence grise behind Rouhani, whose politics of reconciliation unmistakably bore the cleric's stamp.

Rafsanjani, who died of a heart attack at the age of 82 in early January, spoke out early on in favour of a rapprochement with the USA. As president from 1989 to 1997, he was confident that opening up the Iranian economy would help to rebuild the country after the devastating war with Iraq. A pragmatist who always put state interests before ideology, Rafsanjani realised from the start that Iran would not be able to develop further without first normalising its relations with the West. 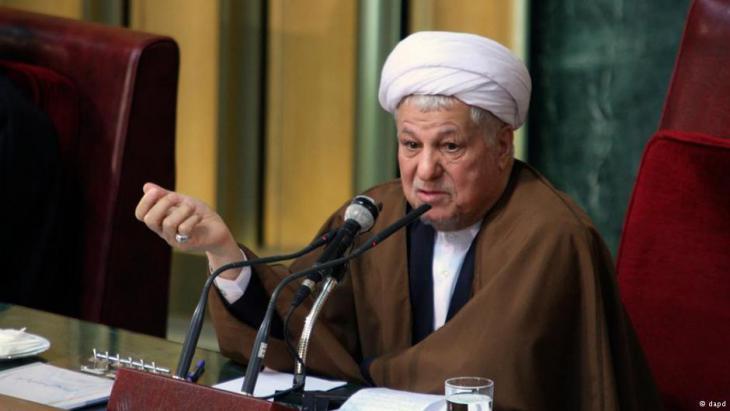 Moderate and pragmatic: Rafsanjani was hated by hardliners in Iran for his proximity to the reform faction. While Supreme Leader Ayatollah Ali Khamenei′s support for the nuclear agreement remained lukewarm, Rafsanjani stood staunchly behind the government's course. A shrewd tactician, he not only campaigned publicly in favour of the treaty, but also used his many contacts in politics, the clergy and the military to drum up support behind the scenes

When Rouhani was elected president in 2013, thanks in part to Rafsanjani's active support, he wasted no time in gearing his policies towards the views of his long-time mentor. Rouhani's  predecessor, Mahmoud Ahmadinejad, had driven the country into isolation with his aggressive rhetoric and confrontational course in the nuclear dispute, provoking the West to impose harsh trade and financial sanctions. Rouhani by contrast sought dialogue with the West.

While Supreme Leader Ayatollah Ali Khamenei′s support for the nuclear agreement remained lukewarm, Rafsanjani stood staunchly behind the government's course. A shrewd tactician, he not only campaigned publicly in favour of the treaty, but also used his many contacts in politics, the clergy and the military to drum up support behind the scenes. Even though he had forfeited some of his power in past years, his voice still carried weight.

"The Shark" at the centre of power

In earlier years, the conservatives had tried to force Rafsanjani out of politics after he had openly defended the protests against the disputed re-election of Ahmadinejad in 2009. However, "The Shark", a nickname prompted by his beardless chin and his cunning, was not going to be marginalised quite so easily – for that, the shrewd string-puller was far too deeply rooted in Iran's power structures.

As Arash Karami writes in the web magazine "Al-Monitor", Rafsanjani continually initiated new discourses in recent years, for example calling on the public to cease calling out "Death to America". As co-founder of the Islamic Republic and close confidant of founder Ayatollah Khomeini, he could get away with going where other politicians feared to tread. And once an idea had been brought up, others could embrace it as their own. 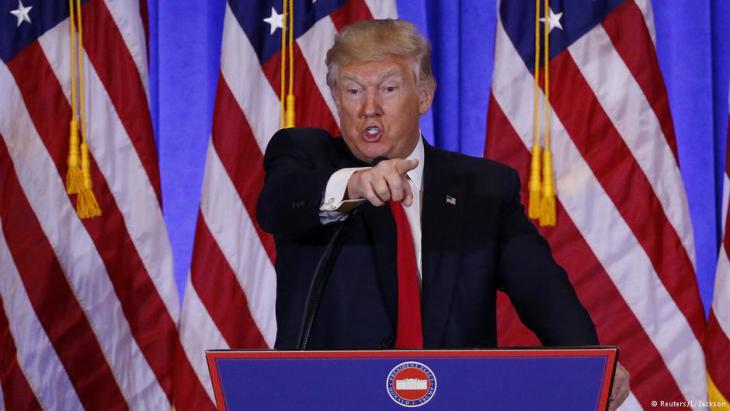 Outspoken opponent of the nuclear deal with Iran: to date Trump has rejected the agreement reached between the five UN Security Council members, Germany and Iran in July 2015. Trump has declared that the terms of the deal to be ″a disgrace″. Asked whether the USA will be withdrawing from the deal, he merely said, "We will see"

Rafsanjani's proximity to the reformers drew the wrath of the hardliners. After his death, however, it was remarkable how the conservative press suddenly paid tribute to his merits. Even newspapers like "Keyhan", which had sharply criticised him in the past, now began singing his praises. Hundreds of thousands of people came out to accompany Rafsanjani's funeral procession and the conservative state television station reported in detail on the event.

Karami writes in "Al-Monitor" that the conservatives are apparently trying to claim Rafsanjani as one of their own now that he's gone, in an attempt to stop moderates and reformers from invoking him in their programmes. These efforts to appropriate the deceased cleric do not bode well for Rouhani. The death of his mentor is a painful loss for him and one that will further complicate his drive for a second term in the presidential elections in May.

In the shadow of sanctions

Even before Rafsanjani's death, Rouhani's re-election was far from a sure thing, because many Iranians are disappointed in his politics. The signing of the nuclear treaty has brought about the desired lifting of economic sanctions, but the hoped-for upturn in Iran's economy has yet to materialise. Many European banks still fight shy of financing transactions with Iran for fear of violating those US sanctions that are still in place. 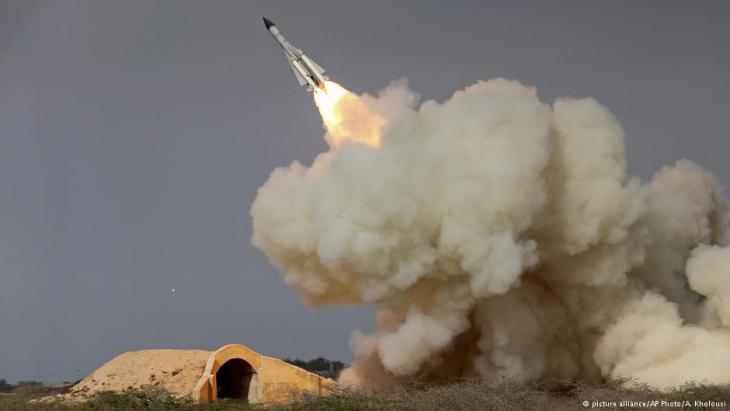 Washington and Tehran on collision course: Donald Trump issued a sharp warning to Tehran following a ballistic missile test. The President tweeted last Thursday, Iran could consider itself ″formally warned.″ The Iranian government indignantly brushed off the threat. General Hossein Salami, deputy commander of the Iranian Revolutionary Guard, retaliated with harsh words. "The number of Iranian missiles, warships and missile defence systems continues to grow," he said. "There is no power able to threaten Iran"

With the recent inauguration of Donald Trump, the nuclear deal has now been called into question. It is not yet certain whether the USA, as declared enemy of Iran, will really terminate the agreement as threatened during the election campaign. Even the impulsive Republican leader seems to realise that America can hardly take action against Iran as long as the Europeans hold fast to the agreement and are unwilling to go along with new economic sanctions.

Should Trump even do so much as step up his rhetoric against Iran, however, this will give further impetus to the hardliners in Tehran. The entry barrier imposed on Iranians and other Muslims by the US President is already grist to the mill for the conservatives, who now see their distrust of "The Great Satan" as being confirmed. From their point of view, Rouhani sacrificed Iran's valuable nuclear programme and got nothing more than empty promises in return.

For the conservative factions in Iran, the new US sanctions imposed due to the missile tests are further proof that concessions are pointless if the arch-enemy is simply going to continue its policy of containment under another pretext. It remains to be seen whether the conservatives will be able to agree on a joint candidate to run against Rouhani in the presidential elections. But the global political situation is at the moment certainly not playing into his hands. It is thus all the more troubling for Rouhani that at this very moment he must now forge ahead without the "Sheik of Moderation" at his side.

Beyond the latest crisis with Iran, current U.S. Middle East policy is nothing if not chaotic. Many fear that the Trumpian approach could irreparably damage future U.S. ... END_OF_DOCUMENT_TOKEN_TO_BE_REPLACED

Behind a suffocating political system and inquisitive cliches, Iranian youth dream of a break with the system while proudly defending their culture. ... END_OF_DOCUMENT_TOKEN_TO_BE_REPLACED

Looking outwards with the knowledge from within: a conversation with the Iraqi writer Sinan Antoon on the future of his homeland. Interview by Lena Bopp END_OF_DOCUMENT_TOKEN_TO_BE_REPLACED

The Iranian people are being held hostage by the confrontation between America and the regime in Tehran. Stefan Buchen considers in his essay whether the country's culture can ... END_OF_DOCUMENT_TOKEN_TO_BE_REPLACED

With "The Enlightenment of the Greengage Tree", Shokoofeh Azar has created a beautiful, sad fable set in a horrible reality. While there are moments of hope to be found in the ... END_OF_DOCUMENT_TOKEN_TO_BE_REPLACED

From the Kingdom of Elam to Alexander the Great, to the Shah dynasties and the Islamic Republic, Iran's cultural sites reflect its long history. ... END_OF_DOCUMENT_TOKEN_TO_BE_REPLACED
Author:
Ulrich von Schwerin
Date:
Mail:
Send via mail