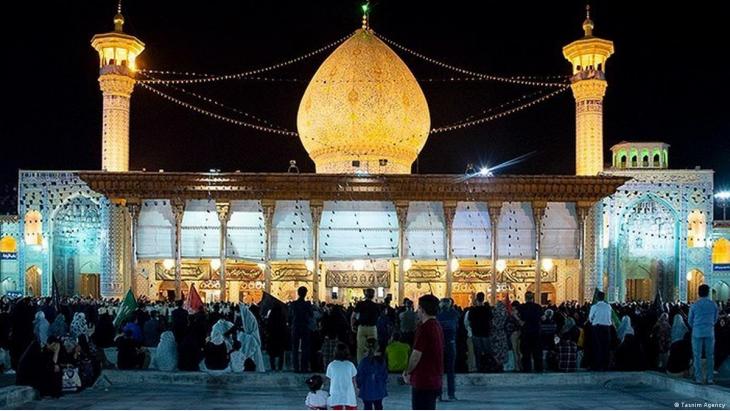 Iran's president on Thursday claimed "riots" sparked by Mahsa Amini's death paved the way for "terrorist" attacks, a day after a gunman killed at least 15 people at a Muslim shrine. The bloody attack in the southern city of Shiraz came as thousands of mourners paid tribute to Amini on Wednesday in her western hometown, 40 days after her death in police custody.

Ultra-conservative President Ebrahim Raisi appeared to link the two tragedies on Thursday, declaring that "the intention of the enemy is to disrupt the country's progress, and then these riots pave the ground for terrorist acts". Raisi vowed "a severe response" over the mass killing at the Shia Muslim Shah Cheragh mausoleum during evening prayers - an attack that was claimed by the Sunni extremist group Islamic State.

Protests have gripped Iran since Amini, a 22-year-old of Kurdish origin, died on 16 September, three days after her arrest in Tehran by the notorious morality police for allegedly breaching the Islamic dress code for women. The rallies have been led by young women who have burned their headscarves and confronted security forces, in the biggest wave of unrest to rock Iran for years. Nearly six weeks after Amini's death, the demonstrations show no signs of ending, fuelled by public outrage over a crackdown that has claimed the lives of other young women and girls.

Despite heightened security measures, columns of mourners had poured into Amini's hometown of Saqqez in Kurdistan province on Wednesday, paying tribute at her grave at the end of the traditional mourning period. Mourners chanted at the Aichi cemetery outside Saqqez, before many were seen heading to the governor's office in the city centre, where Iranian media outlets said some were poised to attack an army base.

"Security forces have shot tear gas and opened fire on people in Zindan square, Saqqez city," the Hengaw rights group said, without specifying whether there were any dead or wounded.

After nightfall, blasts were heard as security forces fired on protesters in Marivan, Kurdistan province, in a video published by Hengaw, a Norway-based organisation. "Death to the dictator," chanted protesters in the nearby city of Bukan where bonfires burned in the streets, the rights group said.

Protesters also surrounded a base of the Basij militia in Sanandaj, a flashpoint city in Kurdistan province, starting fires and driving security forces back, it added. There were similar scenes in Ilam city, near Iran's western border with Iraq.

Iran's ISNA news agency said the Internet had been cut in Saqqez for "security reasons", and that nearly 10,000 people had gathered in the city. But many thousands more were seen making their way in cars, on motorbikes and on foot along a highway, through fields and even across a river, in videos widely shared online.

Noisily clapping, shouting and honking car horns, mourners packed the highway linking Saqqez to the cemetery eight kilometres away, in images Hengaw said it had verified.

ISNA said some of the crowd returning from the cemetery had "intended to attack an army base", until they were dispersed by other participants. A police checkpoint was torched and fires burned beside a bridge in the Qavakh neighbourhood of Saqqez, according to a verified video.

Some activists behind the daily protests over Amini's death, which have evolved into a broader campaign to end the Islamic republic, have raised suspicions over the timing of the Shiraz attack. "For its survival, for distracting the protesters, for justifying killings and crackdowns, the Islamic republic always puts on such bloody shows," one of them, Atena Daemi, tweeted. "The people have been fighting for 40 days non-stop to end such crimes."

Oslo-based group Iran Human Rights says the security forces' crackdown on the Amini protests has cost the lives of at least 141 demonstrators, including at least 29 children. Amnesty International says the "unrelenting brutal crackdown" has killed at least 23 children.

The United States on Wednesday slapped sanctions on more than a dozen Iranian officials over the bloody response to the protests. The White House said it was "concerned that Moscow may be advising Iran on best practices to manage protests, drawing on... extensive experience in suppressing" opponents.    (AFP)

More on this topic
Iran protests: "Change that goes beyond the moment"Protests in Iran: Arab women in solidarity with their Iranian sistersIran protests 2022: Shirin Ebadi: "Iran will be democratic one day"
Home
Print
Newsletter
MoreAll Topics

END_OF_DOCUMENT_TOKEN_TO_BE_REPLACED
Social media
and networks
Subscribe to our
newsletter