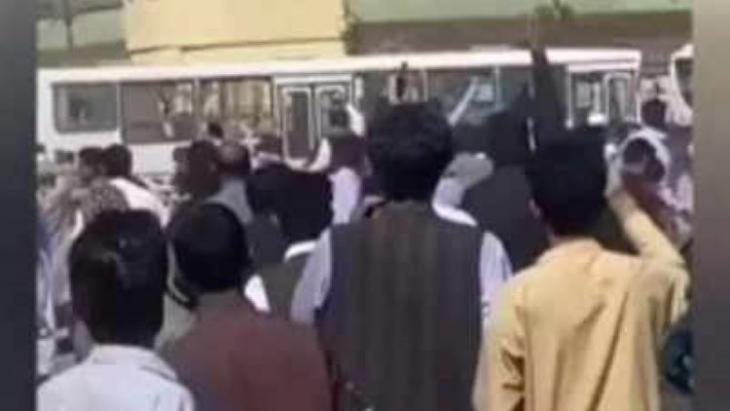 Iranian security forces have massacred over 80 people in the southeastern city of Zahedan in Sistan-Balochistan province, in a crackdown on protests that erupted as Iran is convulsed by nationwide demonstrations, rights activists charge.

President Ebrahim Raisi has ordered an investigation into the unrest that started on 30 September after Friday prayers, which officials have characterised as attacks by "extremists" on police stations.

Activists however say the horrifying images of bloodied corpses with bullet wounds are emblematic of Tehran's repressive policies towards a poor ethnic minority region.

Zahedan is the main city of Sistan-Balochistan, Iran's poorest region, on the border with Pakistan. Zahedan is one of Iran's few Sunni-majority cities and the region is populated by the Baluch ethnic minority who adhere to Sunni Islam rather than the Shia Islam predominant in Iran.

Activists have long complained the region has been the victim of discrimination by Iran's Shia clerical leadership, with disproportionate numbers of Baluch killed in clashes every year and also hanged in executions.

The region has been the scene of attacks on the Iranian security forces that Tehran has blamed on Sunni extremist groups, while the border area is also seen as a hub for drug smuggling by armed gangs.

Amnesty International said that in 2021 at least 19 percent of all executions were of members of the Balochi minority, who it said make up five percent of Iran's population.

"Killing Baloch does not cost much for the Iranian government," said Abdollah Aref, director of the UK-based Baluch Activists Campaign (BAC).

The unrest erupted two weeks into nationwide protests in Iran over the death of Mahsa Amini, who had been arrested by the notorious morality police. However, the trigger for the protests were accusations that a regional police chief had raped a 15-year-old-girl in custody in the port city of Chabahar, also in Sistan-Balochistan. It is not clear why she was detained.

The accusation had been made public last month by the Friday prayer leader in the town of Rask south of Zahedan, prompting protests that then spread to the main city of the region.

According to Aref, a protest was planned after Friday prayers in Zahedan on September 30. Demonstrators then headed to the police station to protest the rape and also shouted slogans against supreme leader Ayatollah Ali Khamenei.

The protests then spread across the city, targeting other police stations, said Aref. "The police sought to send a message," he added.
Internet monitor Netblocks reported access disruptions in Zahedan.

According to Amnesty, 82 people have been killed, with 66 losing their lives on September 30 alone, including three children.

The protest "was bloodily suppressed by security forces. It has since been named Zahedan's 'Bloody Friday'," said Norway-based group Iran Human Rights (IHR).

Influential Sunni cleric Molavi Abdol Hamid charged that "a group of officers... opened fire Friday evening on a crowd that gathered around a mosque, killing and wounding multiple young people".

But state media has put the death toll from the events at 20, including six members of the security forces.

Aref said the death toll was accentuated by a shortage of blood and bandages, meaning many of the wounded died from their injuries. He added: "Many did not go to hospital for fear of being arrested. They preferred home treatment but then lost a lot of blood."

Amnesty said that, according to its evidence, "the majority of victims were shot in the head, heart, neck and torso, revealing a clear intent to kill or seriously harm."

Iranian Foreign Minister Hossein Amir-Abdollahian on Wednesday blamed the violence in Zahedan and elsewhere in Iran on "foreign interventionists, organised agents and terrorists".

Aref said the situation in Zahedan has calmed, although new protests were possible after weekly prayers this Friday. But he added many people had been arrested in a clampdown on participants in the protests, although the precise figures were not clear.

Reports said that Taftan, the main border crossing east of Zahedan between Iran and Pakistan's Balochistan province, had been closed in the wake of the unrest.

Meanwhile executions of Baloch have continued. Four of five people who were hanged at the weekend in the prison in the city of Mashhad for drug-related crimes were Baloch, IHR said. Out of 251 people executed in Iran this year, 67 were Baloch, it said.    (AFP)

More on this topic
Sunnis in Iran: The Zahedan networkThe Baloch community in Pakistan and Iran: A forgotten conflict that is very much aliveGolineh Atai's unsung heroines: In Iran, freedom is female
Home
Print
Newsletter
MoreAll Topics

END_OF_DOCUMENT_TOKEN_TO_BE_REPLACED
Social media
and networks
Subscribe to our
newsletter