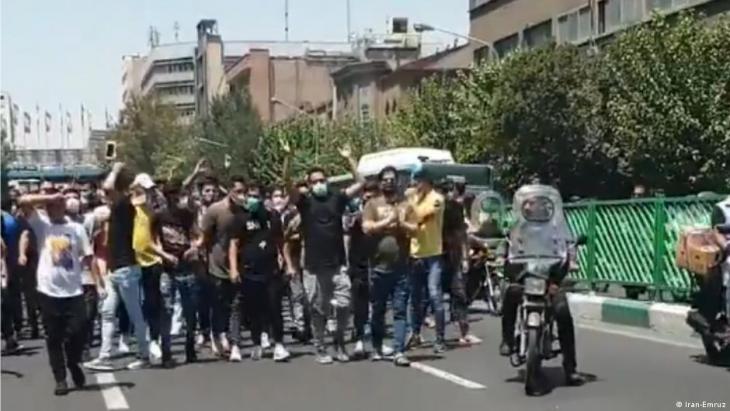 Iran's intelligence ministry said on Tuesday that it has arrested a network of agents working for arch-enemy Israel and seized a weapons cache meant to be used in "riots", state television reported.

The report follows protests over water shortages that erupted more than 10 days ago in the south-west of the country, where, according to Iranian media, at least four people were killed.

Officials have accused "opportunists" and "rioters" of shooting at demonstrators and security forces during the gatherings.

"A network of agents of the Zionist regime's spy agency (Mossad) was arrested... after entering from the country's western border," a ministry official was quoted as saying by the broadcaster.

Iran borders Turkey and Iraq to the west.

A "cache of weapons and ammunition" meant to be used by "Mossad operatives... in urban riots and for assassination" was also seized, the unnamed official added, without elaborating.

The official did not give the nationality of those arrested or make a direct link with the recent protests.

Iran has on previous occasions announced the arrest of individuals accused of spying for its enemies, including the United States and Israel.

The seized weapons included pistols, grenades, shotguns, assault rifles and bullets, with some meant to be used to instigate violence at protests, he added.

A video released by Iranian state TV's website showed a number of weapons and grenades including AK-47s and pistols stacked in the back of a white SUV.

Iran has in recent years been hit by several protests over the economy and living conditions made worse by punishing US sanctions reimposed since 2018.

The Islamic republic has regularly blamed violence at protests on its enemies, mainly the US and Israel, as well as the People's Mujahedin Organisation of Iran (MEK), which Tehran considers a "terrorist group" and has banned since 1981.

Human rights groups outside of Iran have previously accused the Islamic republic of using force against protesters.

Iran has also accused Israel of being behind sabotage attacks against its nuclear sites, and assassinating a number of its scientists. (AFP)

More on this topic
Elections in Iran: Khamenei shuts down opposition ahead of upcoming ballotPower politics in Iran: Fallout from Mohammed Javad Zarif's political bombshellIran downplays and demonises protests amid Internet shutdown Protests in Iran: The spark that turned into a wildfire
Home
Print
Newsletter
MoreAll Topics

END_OF_DOCUMENT_TOKEN_TO_BE_REPLACED
Social media
and networks
Subscribe to our
newsletter