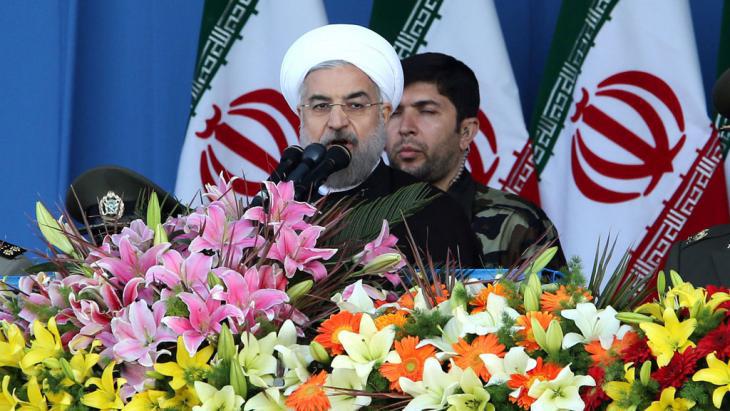 A nuclear agreement with Iran could also mean hope for the settlement of the Syrian conflict. An essay by Charlotte Wiedemann

We have just seen the fourth anniversary of the uprising in Syria. At the same time, negotiations over the Iranian nuclear programme have completed their last, crucial phase. Is there a connection here, between this depressingly bleak anniversary on the one hand, and on the other, the encouraging prospect that finally a conflict might be resolved without first conducting a senseless war?

First of all: as far as the status quo goes, one connection is obvious: the Syrian dictator Bashar al-Assad is clinging to power with the help of Iran, and this cannot be explained without reference to the strategy of isolation that the West has been pursuing for decades in its relations with Iran. This isolation has been sold wonderfully well in the form of the demonisation of the Iranian nuclear programme.

Anyone doubting this reading of the situation should call to mind how the Syria–Iran entente came into being. Two systems as different as the revolutionary Islamic Republic and the socialist-authoritarian secular Syria were brought together neither by any political vision, nor primarily by religion. 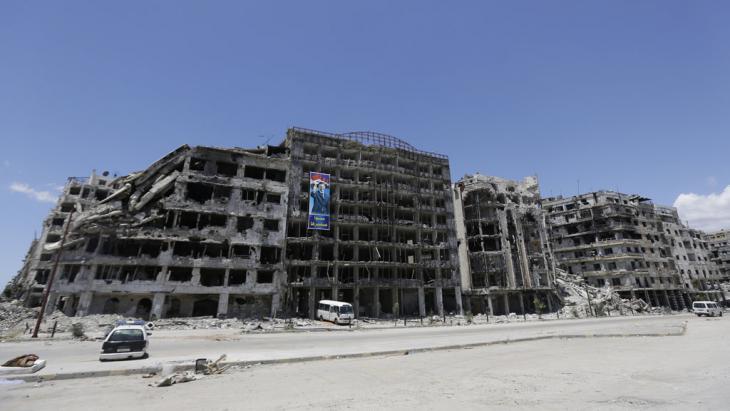 Homs, a city in ruins: "Without Iran's involvement, there can be no solution for Syria. The West has been irresponsible in refusing to see this up to now," writes Charlotte Wiedemann

A difficult search for alliance partners

This was an anti-American – and later also an anti-Israeli – marriage of convenience. Unlike the leaders of the other Arab states, Hafez al-Assad, the current president's father, did not regard Iran as a threat after its 1979 revolution. Six years previously, an Iranian cleric in Lebanon had testified that as an Alawite, he was a Shia, and therefore a Muslim, not an apostate. Hafez al-Assad owed a debt of gratitude for this testimony. At the same time, however, the episode demonstrated how weak his religious profile was. Iran, on the other hand, had little choice when it was selecting its allies.

Back to the present. Today, the man whose power Tehran is shoring up in Damascus drops barrel bombs on his own people and has recently even been suspected of using chlorine gas. Whatever the history leading up to these actions, there can be absolutely no justification for them.

Those who believe that morality is more on the side of Western strategists might feel that the USA should pressurise Iran to drop Assad instead of negotiating with the dictator after all, as the foreign minister, John Kerry, recently contemplated out loud. There is only one thing right about the idea that Washington should exert pressure on Tehran or even link the nuclear dossier to the Syria dossier: without Iran's involvement, there can be no solution for Syria. The West has been irresponsible in refusing to see this up to now. But pressure? In the past, the Islamic Republic has not reacted as hoped to the exertion of pressure; moreover, today the United States is no longer in a position to make such gestures of superiority. 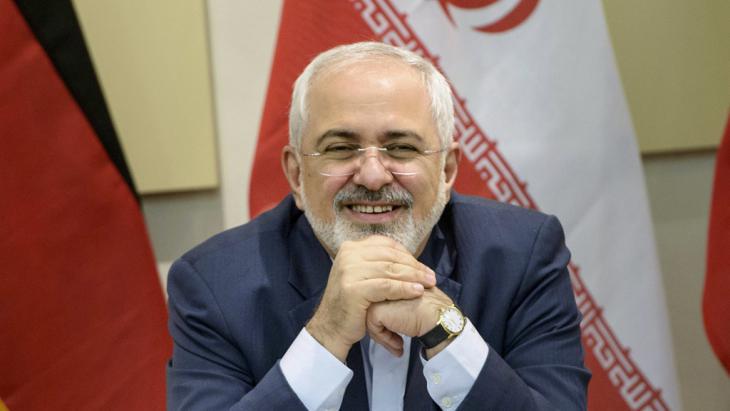 Cautious optimism: speaking after a framework agreement on Iran's future nuclear programme was reached last week in Switzerland, Iranian Foreign Minister Javad Zarif (pictured here) said "We have built mutual mistrust in the past, and I hope that ... some of that mistrust could be remedied"

Americans on the retreat

To give just one example: in Iraq, Iran is in the process of side-lining the USA in the fight against "Islamic State"; the Americans, who were recently acting as "co-ordinators" of the fighting, were not even present during the recent most important offensives.

So the only valid sequence of events is: a nuclear agreement could also spark hope for Syria because the more Iran, in its strengthened position, is being recognised as a mid-sized regional power, the more Tehran is willing to talk. As the foreign minister Javad Zarif, who tirelessly drove the nuclear talks forward, put it: "the highest priority is to defeat the international anti-Iran campaign" that has always portrayed Iran as a security risk. Instead, "Iran's legitimate national interests and security concerns [must be] recognised and respected".

Let us consider for a moment the war in Syria from Tehran's perspective. In our view, a dictator is waging war on his own people. The Iranian viewpoint is different, and not only within regime circles: here, the view is that Iran is protecting Syria (as it is also protecting Iraq) from disintegration. We say: Iran is fighting a proxy war against Saudi Arabia at the expense of Syria's civilian population. Iran says: we are combating terrorism that is being supported by the West's allies – Saudi Arabia, Qatar, Turkey – and that threatens the entire region.

Unlike the West, whose policy towards Assad has always been contradictory, Iran's depiction is comparatively coherent. The opponents are always described in state media as "takfiri", an Arabic term for those Muslims who presume to declare unpopular fellow Muslims to be apostates, and thereby justify killing them. In a collapsing Arab world, they say, Sunni extremism would get worse. 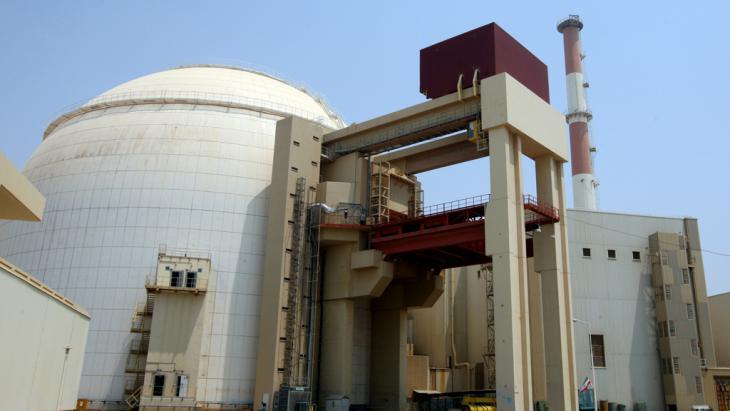 Following the success of the Lausanne talks, Charlotte Wiedemann sees two possible scenarios: either the government of Rouhani and Javad Zarif will have more room to manoeuvre, "which could also mean acting to end the war in Syria", or it will be put in its place for the time being

This threatening scenario is shared by many Iranians, perhaps partly because other viewpoints on Syria are not readily available. The 2009 democracy movement, which welcomed the Arab Spring and saw itself as a forerunner of these movements, has fallen silent. And in Iran's portrayal of the war, there are no civilian players with whom people might identify. The civilian victims of the war are reported accurately, using figures from the United Nations, but they are never referred to as victims of Assad.

On the other hand, there is little mention of Assad; it seems nobody wants to commit to him. Mostafa Sahrani, the head of the Tehran "Institute for Political and International Studies", an important foreign-policy think tank, recently laid out the following criteria for a solution to the conflict in Syria: Syria's national unity must be maintained. There is no military solution, he said, only a political one. Moreover, he says that the West must keep Libya in mind as a warning example.

When asked about Assad, Sahrani replied: "Foreign powers should prepare the way for Syrians to decide for themselves what they want. We should not impose any conditions for the outcome". In other words: Iran is not pressuring Assad to stand down; but nor is it supporting him at any price. Hossein Mousavian, once a leading foreign policy expert under the reform-minded president Mohammad Khatami, recently reminded people of Afghanistan. He suggested that supplanting Assad would require a compromise candidate, such as Hamid Karzai had been in Afghanistan. Although western-oriented, Karzai was proposed by Iran in 2001. 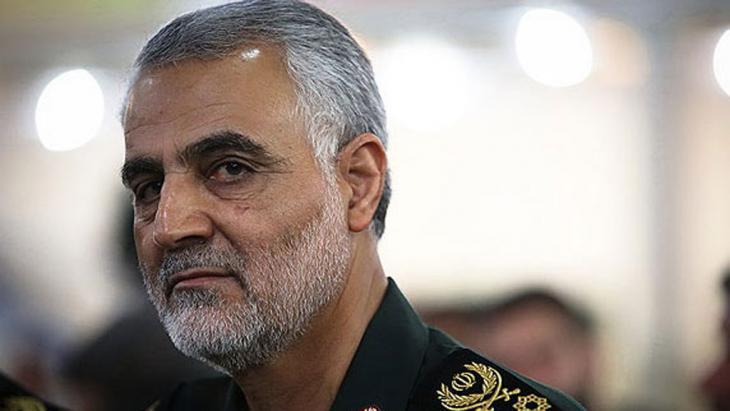 Iran and Saudi Arabia are fighting for supremacy in the region, and Iran is gradually increasing its influence. In Iraq, for example, it is engaged in fighting IS. Qassem Soleimani (pictured here) is head of the Quds Brigade, a branch of the Revolutionary Guard deployed on foreign missions, and is leading this fight in Iraq

On the "Axis of Evil"

From today’s perspective, the gloss has entirely disappeared from the Afghan blueprint for lasting peace, which was reached after the fall of the Taliban. From the Iranian viewpoint, however, there is something else worth emphasising: far from being rewarded for its constructive role at the time, Iran was punished. The ink had barely dried on the peace plan concluded at the Hotel Petersberg in Bonn when US president George W. Bush placed Iran on the Axis of Evil. Later attempts by Tehran to negotiate a comprehensive regional peace and security package with the USA met with sheer indifference from Washington. These stories have to be retold again now in order to understand why the current situation in Iran is so complex.

Ali Khamenei, who has held the office of spiritual leader since 1989, has been influenced by humiliations of this kind. He may have given his backing to President Hassan Rouhani in the nuclear talks, but he continues to issue warnings about "befriending the enemy", the "arrogant powers" – a 30-year-old phrase from the time of the Iran–Iraq war. Back then, the West was on the side of Saddam Hussein.

The section of the Iranian population that has remained loyal to Khamenei has decreased in size since the legitimacy crisis of 2009. In order to shore up the remaining base of the regime, the narrative of "resistance" has been repeatedly revived, even if – or perhaps precisely because – the real policy is actually shaped by rapprochement.

Moreover, the hardliners, whom Khamenei must constantly win over anew for the policy of detente in the nuclear question, are clinging to an alliance with Syria and the Lebanese Hezbollah on ideological grounds – this is the "axis of resistance". Qassem Soleimani, the much-mythologised commander of the Quds Brigade (a branch of the Revolutionary Guard deployed on foreign missions), is reputed to have said that Syria would be "defended to the end", whatever that might mean.

We should be cautious in making prognoses when it comes to Iran. Now that an agreement in the nuclear dispute has been reached, there are two potential scenarios. Strengthened by success on this issue, the government of Rouhani and Javad Zarif could gain more freedom to act, which could also mean acting to end the war in Syria. However the opposite is also possible: the politicians who supported detente could then be put in their place for the time being. Let's hope for the first scenario.

Iranians do not want an Islam that interferes. They are fed up with a system that manipulates people with simple promises of salvation and anti-Western propaganda. Islamic ... END_OF_DOCUMENT_TOKEN_TO_BE_REPLACED

"The Voice of Dust and Ash" draws us into the life and times of Iranian maestro Mohammad Reza Shajarian with passion and joy, focusing on the man who stood, and still stands, for ... END_OF_DOCUMENT_TOKEN_TO_BE_REPLACED

The Kurds are under attack from two sides: from Turkey, and from Iran. The situation in their territories in northern Iraq is becoming increasingly desperate. Birgit Svensson ... END_OF_DOCUMENT_TOKEN_TO_BE_REPLACED

November 2022 sees the Arab world firmly in the spotlight with the COP27 in Egypt and the FIFA World Cup in Qatar. Public trust in MENA governments is weak, thanks to their ... END_OF_DOCUMENT_TOKEN_TO_BE_REPLACED

In Iran, two famous actresses, Hengameh Ghaziani and Katayoun Riahi, were arrested recently. These days anyone who shows solidarity with the protesters is a target to be silenced ... END_OF_DOCUMENT_TOKEN_TO_BE_REPLACED

With the current leadership of Iran quick to lay the blame for the Iran protests on Israel, the chances of harmonious relations between the two countries still seems remote. Yet, ... END_OF_DOCUMENT_TOKEN_TO_BE_REPLACED
Author:
Charlotte Wiedemann
Date:
Mail:
Send via mail

END_OF_DOCUMENT_TOKEN_TO_BE_REPLACED
Social media
and networks
Subscribe to our
newsletter