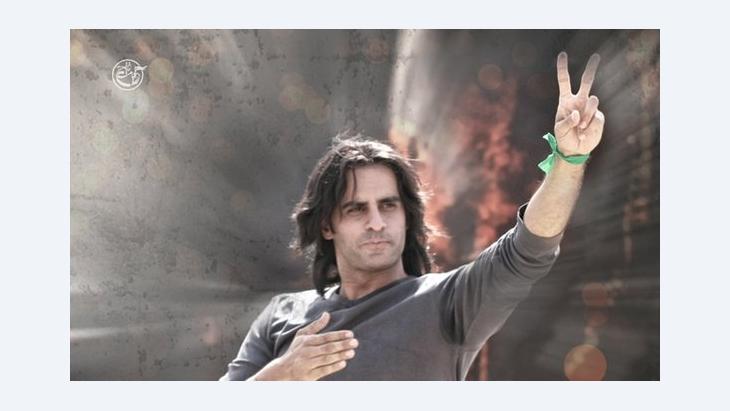 ﻿The Iranian regime has supported the making of a big budget propaganda film, "The Golden Collars". In it, the 2009 Iranian uprising against the regime is presented as a malicious plot initiated by foreign spies and manipulated by the West in order to destabilize the country. Stefan Buchen on a crude piece of propaganda

﻿Iran is continuing to push forward with its nuclear programme despite the punishing sanctions. The question of war or peace hangs like a dark cloud over the Middle East as fears of a possible confrontation between Iran and Israel grow. Iran's nuclear programme has dominated media coverage of the country for more than two years now. But just how dangerous is the Iranian regime?

According to German Chancellor Angela Merkel, Iran represents a threat, not just to Israel, but to the entire world. In the meantime, other issues such as how the regime is going about keeping control of its own people, or what conditions inside the country are really like, seem no longer to be of interest, indeed, to have become almost irrelevant.

The "Green Wave" of protest that swept the country in 2009 in an attempt to halt the re-election of President Ahmadinejad has been forgotten. Words such as "uprising" and "revolution" are now more likely to make us think of the Arab Spring of 2011 than of the hot Iranian summer of 2009. The regime has succeeded in snuffing out calls for reform; it has placed the leaders of the protest movement under house arrest and gagged freedom of expression of the press, on the internet and in the arts.

State-sponsored propaganda for the edification of Iranians

The internationally critically acclaimed Iranian cinema, once the most credible of the country's dissenting voices against the regime has been reduced to a mere shadow of its former self. Exiled Iranian filmmakers do try to recreate their country on screen and so to tell "Iranian stories", but much of the authentic atmosphere of their homeland seems to get lost along the way. There are almost no independent productions coming out of Iran any more. Leading filmmakers such as Jafar Panahi or Mohammad Rasoulov have been banned from making films at all. 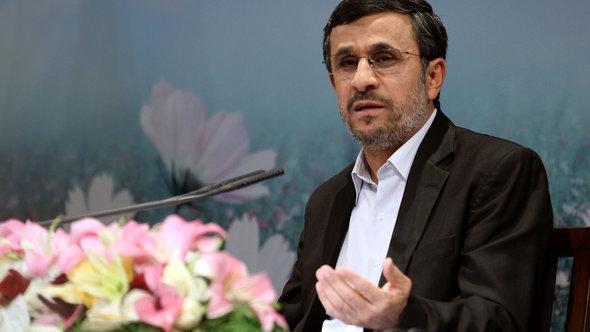 Legitimate protest against a rigged election as malicious machinations by the West: Using the film, the Iranian regime intends to re-interpret the political events that accompanied the presidential elections of 2009, Stefan Buchen says

​​At the same time, however, the regime itself has supported the making of a big budget film, a move by which it intends not only to re-appropriate this particular art form, but also to grant itself the licence to re-interpret, in a way favourable to itself, the political events that accompanied the presidential elections of 2009.

The government's propaganda machinery has praised the film "Ghaladehaye Tala" (The Golden Collars) by Abolqasem Talebi as "the most political film in Iranian cinema history". The heavy-handed thriller was released in the Iranian cinemas some months ago and has now also been issued on DVD. Anyone curious to know just what the story is that the regime has come up with for the edification of its own people (ten thousand cinema tickets were given away free) need look no further than here.

The theme is nothing less than the "Green Wave" movement itself. In "The Golden Collars", of course, the protest is not presented as a legitimate and broad-based rebellion against the authoritarian political culture of the Islamic republic and the controversial re-election of Ahmadinejad, but rather as a malicious plot initiated by foreign spies and manipulated by the West in order to sow the seeds of chaos in the country and ultimately to bring down the government. It is the hated British that are portrayed here as chief culprits. Naturally, the roles played by the Iranian secret service and police are not those of oppressors but of national heroes.

Villain of the piece is a British MI6 secret service operative. From the regime's point of view, this man, who is of Iranian extraction, is the personification of all evil. His parents, the viewer discovers, were misguided refugees who fled to Europe. He himself had joined the "People's Mujahedin" opposition group, collaborators with Iran's arch enemy, Saddam Hussein. It was from here that he would be recruited by the British, who would teach him how he could lead the enemy with "golden collars" in the direction he desired.

The agent is smuggled into Iran just before the presidential elections are due to take place. He becomes the ringleader of a top-secret and ruthless cell of revolutionaries whose aim is to use the electoral duel between Ahmadinejad and Mousavi, the reform group candidate, for their own purposes. Following the clear victory of Ahmadinejad in the election, the spy and his helpers become agents' provocateurs, mingling with the demonstrators and throwing incendiary bombs at vehicles and buildings. It is their actions that are seen to be responsible for turning the protests into an orgy of violence and it is they who provide the demonstrators with their chant of "taghallob" (fraud). 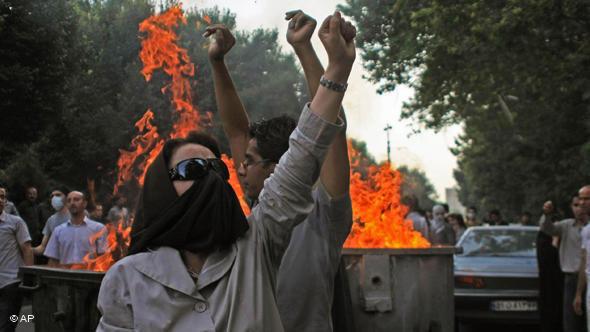 The demonstrators as a well-meaning but misguided and naive mob taken in by the wiles of imperialist agents: The government's propaganda machinery has praised the film as "the most political film in Iranian cinema history"

​​The agents are even prepared to resort to murder. They shoot a woman from their own group who had contact with the British Embassy and blame the act on the Iranian security forces. This, presumably, is an allusion to the real murder of Neda, icon of the "Green Wave". The image of her lifeless body, covered in blood, stretched out on a street in Teheran made world news in June 2009 and became a symbol of the brutal suppression of the "Green Wave" by the Iranian regime.

The symbolism is reversed in the film. The mass demonstrations are represented here as the result of the unscrupulous espionage tactics employed by the West. The demonstrators thus become a well-meaning but misguided mob taken in by the wiles of imperialist agents.

A purging of all evil

The unsurprising conclusion to the film sees the West's machinations thwarted. The hero, a young idealistic employee of the Iranian counter-intelligence services, puts paid to the plans of the MI6 agent. He also finds time along the way to clean up the Iranian secret service by ridding it of all Western spies. A purging of all evil.

The Teheran coup of 1953, when the CIA directed events that led to the downfall of the nationalist Prime Minister Mosaddeq, is an event that is deeply engraved in the Iranian collective memory. It also provides the foundation for this film's propagandist message. In terms of its form, the film, ironically enough, is pure Hollywood at its tackiest – brash and blunt with no cliché spared. In this respect it offers something very different from the more subtle tone and allegorical narrative techniques of the internationally successful Iranian cinema, a cinema which the current rulers of the country apparently want to see an end to.

In "Ghaladehaye Tala", former reformist president Mohammad Khatami is depicted as a favourite and puppet of the West. The viewer is told of the dangers that the internet and social networks represent when they are abused and thus why their control by the state is so necessary. 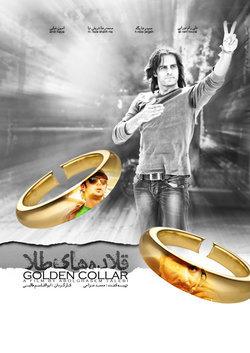 "The Iranian leaders demonstrates what happens to culture in a dictatorship that has succeeded in crushing an uprising: it becomes duller, more slow-witted and more cynical than ever before"

​​The MI6 spy seeks out his allies among the ranks of the regime's most potent enemies: the supporters of the Shah and the People's Mujahedin. Another villain is a monarchist and ally of Britain, seen basking in luxury aboard his yacht on the Bosporus and dining on the finest foods and wines, all served to him by an unveiled woman. It is from here that he coordinates the planned coup via his mobile phone.

One of the female agents looks and sounds very like Mariam Radjawi, leader of the People's Mujahedin, who was elected "President of Iran" by her followers in Paris some years ago. Among the assorted conspirators are also a gay man and an idiot. Some effort, it is fair to say, has been put in to discrediting the protest movement of 2009.

It is unlikely that Syrian President Bashar al-Assad is going to have the leisure to make such a film giving his take on the popular uprising in his own country. The Iranian leaders did have the opportunity and "Ghaladehaye Tala" demonstrates what happens to culture in a dictatorship that has succeeded in crushing such an uprising: it becomes duller, more slow-witted and more cynical than ever before. "The disturbing thing is that many people in Iran believe what the film is telling them," one exiled Iranian film director has said.

Not everyone, perhaps. Not those who took to the streets in 2009 at any rate. At the moment, it seems, these streets are no longer safe for actor Amin Haya'i. The word from Iran is that the star who played the MI6 agent in the film has been given some rough treatment from his public. Many people appear to resent the fact that the country's most famous film star agreed to take part in the propaganda film. It is news that carries a blink of hope: there may be some life left in the protest movement after all.

Home
Print
Newsletter
More on this topic
The Documentary "The Green Wave": The Rise and Fall of Iran's Protest MovementThe Iranian Writer Amir Hassan Cheheltan: The Loyal DissidentInterview with Nader Hashemi: ''The War of Ideas in Iran Is Over''
Related Topics
All Topics
Date:
Mail:
Send via mail

END_OF_DOCUMENT_TOKEN_TO_BE_REPLACED
Social media
and networks
Subscribe to our
newsletter