Iranian protesters in new show of defiance despite crackdown 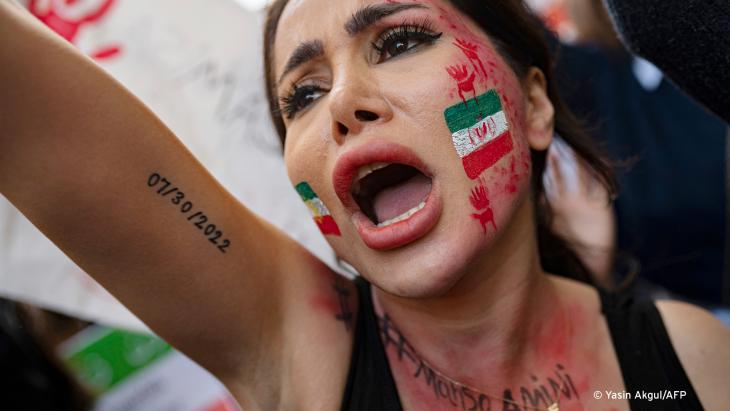 Iranians staged new protests on Tuesday to denounce the country's theocratic regime in defiance of a crackdown that has seen prominent figures arrested and some even face the death penalty.

Iran has been rocked by six weeks of protests of a scale and nature unprecedented since the 1979 Islamic Revolution, sparked by the death in mid-September of Mahsa Amini who had been arrested by the Tehran morality police.

The authorities have warned protesters it is time to leave the streets but the demonstrations have shown no sign of abating, with people rallying in residential areas, on major avenues and at universities nationwide.

The challenge for the regime is compounded by the custom in Iran to mark 40 days since a person died, turning every "chehelom" mourning ceremony for the dozens killed in the crackdown into a new potential protest flashpoint.

Residents of the Tehran district of Ekbatan late on Monday shouted slogans including "Death to the dictator", while security forces used stun grenades against them, according to footage posted on the monitoring site 1500tasvir and other outlets.

IHR said a large crowd on Tuesday attended the 40th day mourning ceremony for protester Siavash Mahmoudi, who it said was shot dead by the security forces, at the Behesht-e Zahra cemetery outside Tehran, also chanting "Death to the dictator".

Students at Beheshti University in Tehran, including some women not wearing headscarves, marched shouting "chant for your rights", according to the New York-based Center for Human Rights in Iran.

Amini's family says she died following a blow to the head while in custody. The Iranian authorities contest this explanation and said they have ordered an investigation.

The protests were fuelled by anger over the strict Islamic dress code for women in Iran that the police who arrested Amini were enforcing. But they have become a rallying point for popular anger against the regime that has ruled Iran since the 1979 fall of the shah.

While there have been outbursts of protests in Iran over the past two decades, the current movement has regularly broken taboos.

Images shared on social media showed murals of revolutionary leader Ayatollah Ali Khamenei and his predecessor Ayatollah Ruhollah Khomeini had been daubed with red paint in the holy city of Qom.

According to IHR, 160 people have been killed in the crackdown on the protests sparked by Amini's death and another 93 in a distinct protest wave in Zahedan in the southeastern Sistan-Baluchistan province.

The Norway-based Kurdish rights group Hengaw said teenager Komar Daruftade from Piranshahr in northwestern Iran, was among those buried. It said security forces had shot the 16-year-old at close range.

One viral video showed police in Tehran's Naziabad district savagely beating a protester, running him over with a motorbike and firing at him. Amnesty International called the video "another horrific reminder that the cruelty of Iran's security forces knows no bounds".

Thousands have been arrested nationwide, rights activists say, while Iran's judiciary has said 1,000 people have been charged in connection with "riots".

The trial of five men charged with offences that can carry the death penalty over the protests opened on Saturday in Tehran. One of them, Mohammad Ghobadlou, was sentenced to death at the first session, according to a video from his mother posted by the Washington-based Abdorrahman Boroumand Center. The judiciary has not confirmed the claim.

Rapper Toomaj Salehi has become the latest high-profile figure to be arrested, the Center for Human Rights in Iran said. "You are dealing with a mafia that is ready to kill the entire nation... in order to keep its power, money and weapons," Toomaj told the Canadian Broadcasting Corporation last week.

At least 46 journalists have been arrested, according to the New York-based Committee to Protect Journalists. The culture ministry says eight have been released.

Tehran journalist Marzieh Amiri was the latest to be detained, her sister Samira wrote on Instagram, while France resident Vahid Shamsoddinnezhad was reportedly arrested a month ago while covering the protests for a European outlet.

Meanwhile, prominent freedom of expression campaigner and Wall Street Journal contributor Hossein Ronaghi, who was arrested shortly after the protests began, is on "hunger strike and not well", his brother Hassan wrote on Twitter.

Both Ronaghi's legs have been broken while in custody, he wrote, after the activist was granted a meeting with his parents.    (AFP)

END_OF_DOCUMENT_TOKEN_TO_BE_REPLACED
Social media
and networks
Subscribe to our
newsletter