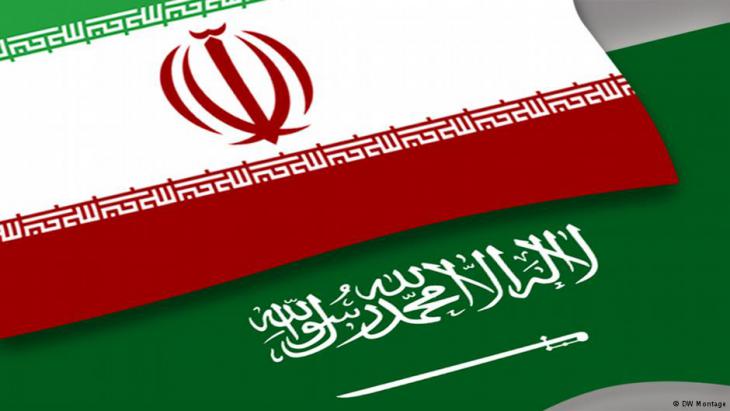 For better, for worse

The West often reduces the strained relations between Iran and Saudi Arabia to the sectarian Sunni-Shia conflict, but the reality is far more complex. By Joseph Croitoru

This simplistic view of the conflict needs to be adjusted, especially when examining the longstanding relations between the modern states of Saudi Arabia and Iran. As they took shape in the 1920s, their rulers – Ibn Saud and Shah Reza Pahlavi – focused on modernising their countries. The Shah faced opposition from the Iranian clergy, Ibn Saud encountered resistance from Saudi legal scholars. The two leaders had these domestic political problems in common and they bonded over them.

In 1929, the two countries concluded a friendship agreement. The relationship became even closer about a decade later when Mohammed Reza Pahlavi came to power as Shah in 1941. With the help of Washington, Iran and Saudi Arabia pursued the goal of containing socialist pan-Arabism and the communist influence of the Soviet Union in the region.

In 1979, the Iranian Shah was overthrown and the Islamic Republic, which was immediately recognised by the Saudis, was founded. Riyadh's hopes of maintaining good relations with Tehran did not pan out. There was no place for the conservative Saudi monarchy in Ayatollah Khomeini's vision of a global Islamic revolution. He even saw the Saudis as an impediment to the revolution.

Khomeini and King Fahd of Saudi Arabia – a difficult relationship

Khomeini tried to influence members of the Shia minority in Saudi Arabia. However, he did not touch on the centuries-old dispute between Sunnis and Shias. Instead, he used the slogan "Liberation of the oppressed." This way, Tehran thought it would win over Islamists in the Sunni world as well. 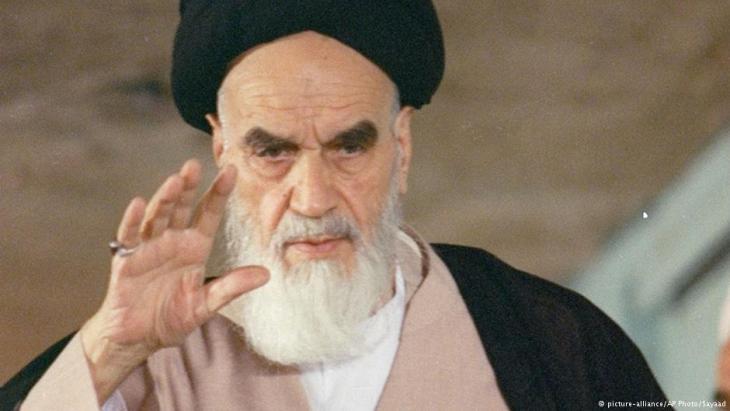 Saudi-Iranian relations ruptured: there was no place for the conservative Saudi monarchy in Ayatollah Khomeini's vision of a global Islamic revolution. The Revolutionary Leader saw the Saudis as an impediment. He even tried to influence members of the Shia minority in Saudi Arabia

Despite the Sunni-Shia conflict, it was a moment of unity. It went well, even when Khomeini demanded a greater say in the management of the Hajj, the pilgrimage to Mecca, where Iranian pilgrims at that time often caused trouble by holding demonstrations at the religious event. This motivated Fahd of Saudi Arabia to adopt the forgotten title of "Custodian of the Two Holy Mosques" in 1986. The following year, when Saudi police opened fire on Iranian pilgrims demonstrating in Mecca, it became clear that Riyadh would no longer tolerate interference from Tehran.

For and against Saddam

In response, Iran severed all diplomatic ties. Relations had already hit rock bottom since Saudi Arabia supported Iraq in the Iran-Iraq War that had been raging since 1980. The Saudis supported Iraqi dictator Saddam Hussein more as a gesture of Arab solidarity than out of any particular conviction. At the beginning of the 1990s, however, the political climate changed in the region. Saddam proved to be more and more unpredictable, especially after his invasion of Kuwait in 1990 and was no longer feared only by Iran, but also by the Saudi royal family.

Against this background – and also because Khomeini had died in 1989 – Tehran and Riyadh mended fences and each reinstalled ambassadors. The repeated rapprochement between Iran and Saudi Arabia, which had been driven by then-President Akbar Rafsanjani, was also a result of political disillusionment in Tehran. The government there distanced itself from the global Islamic revolution it had once advocated and focused more intensely on foreign policy in the region. 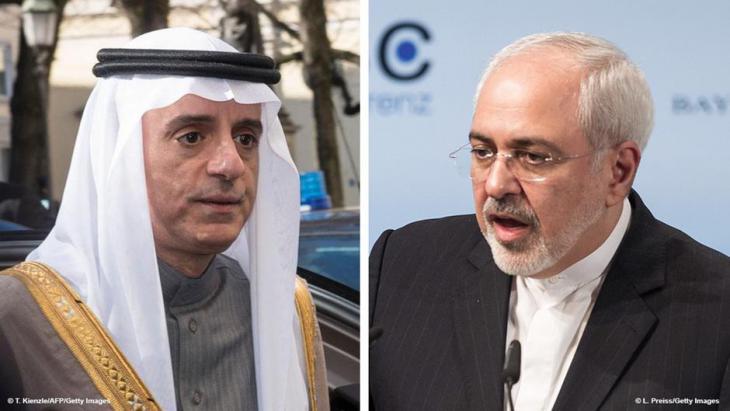 Once again at loggerheads: Saudi Arabia′s foreign minister, Al Jubeir, recently welcomed the harder tone adopted by the new U.S. administration towards Tehran. Iran′s foreign minister, Sarif, accused the leading members of Saudi Arabia′s Sunni Arab monarchy of having imposed a brutal and illogical regime on the kingdom out of obstinacy, idiocy, fanaticism and and infinite wealth

However, this shift in priorities did not only contribute to the improvement of bilateral relations. It also brought new problems for Saudi Arabia. The two countries reached a security agreement in 2001, but Tehran's contribution to the ongoing weapons build-up by the pro-Iranian Lebanese Shia militia Hezbollah worried Riyadh, which began to support the rival Sunni-Christian camp in response.

The Saudis were also concerned about Iran's nuclear programme. Even now, it was not the ancient religious dispute that drove a wedge between the two countries – once allies of the US in the fight against communism, but rather Iran's doctrinaire hatred of Washington, fed by the American intervention in Iraq in 2003. Iran perceived the American advance as encroaching in its immediate sphere of influence. When US troops finally withdrew from Iraq, Iran began interfering in Iraq's interests. Saudi Arabia reacted by trying to curry favour with an Iranian ally, Syrian President Bashar al-Assad.

The rapid Saudi-Syrian rapprochement of 2010, however, ended quickly when the Arab Spring and the Syrian Civil War began. The Syrian war, in which Saudi Arabia and Iran support different camps, is being interpreted as a sectarian war; however, this is not true. The alliance between Tehran and the Alawite ruling elite in Damascus was a never purely religious connection; it ensued mainly from a mutual hostility towards Israel and Saddam Hussein. Sunnis are also fighting each other in Syria today and for the radical Islamist terrorists from the self-styled "Islamic State" (IS), both Shias and rival Sunni jihadists are mortal enemies.

Iran and Saudi Arabia view these extremists as the greatest threat in the region. Both regimes, especially as they are facing increasing pressure to adapt to secularisation, do their best to avoid using religious rhetoric in their verbal exchanges.

Terrorism, the support of terrorism and the desire for expansion are the most common official accusations. By no means do these fit the religious prism the West uses to view the Iranian-Saudi Arabian rivalry. At the last security conference in Munich, the Saudi foreign minister, Adel al-Jubeir, hinted that Iran had secretly joined forces with the anti-Shia IS.

Meanwhile in the eyes of the Iranian Revolutionary Guards, IS is Israel's henchman and as a consequence, part of the Zionist-American conspiracy, which can also gladly incorporate Riyadh if the propaganda agenda requires it.

An interview by Foreign Minister Mohammed Javad Zarif has provoked outrage in Iran. In it, Zarif criticised the Revolutionary Guards' destructive role in both the nuclear ... END_OF_DOCUMENT_TOKEN_TO_BE_REPLACED

In Islamic mysticism, Ramadan is more than just a period of prescribed abstinence, signifying an opportunity for inner contemplation. Marian Brehmer explores the spiritual ... END_OF_DOCUMENT_TOKEN_TO_BE_REPLACED

The USA and NATO plan to withdraw from Afghanistan by September. The operation is risky, the outcome uncertain. Many Afghans fear civil war. The quake on the Hindu Kush will also ... END_OF_DOCUMENT_TOKEN_TO_BE_REPLACED

The Prophet Muhammad never executed anyone for apostasy, nor encouraged his followers to do so. Nor is criminalising sacrilege based on Islam’s main sacred text, the Koran. In ... END_OF_DOCUMENT_TOKEN_TO_BE_REPLACED

Surging coronavirus cases in many parts of the world have overshadowed the start of this year's Muslim holy month of Ramadan, with festivities once again curtailed by contagion ... END_OF_DOCUMENT_TOKEN_TO_BE_REPLACED

German Middle East analyst Guido Steinberg and television journalist Ulrich Tilgner have both published new books on the conflicts in the Middle East. Their analyses and their ... END_OF_DOCUMENT_TOKEN_TO_BE_REPLACED
Author:
Joseph Croitoru
Date:
Mail:
Send via mail

END_OF_DOCUMENT_TOKEN_TO_BE_REPLACED
Social media
and networks
Subscribe to our
newsletter