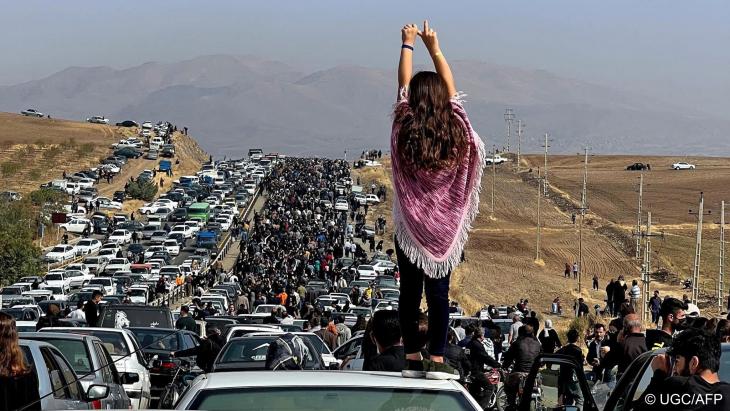 Iranian security forces opened fire on protesters who massed in their thousands on Wednesday in Mahsa Amini’s hometown to mark 40 days since her death, a human rights group said.

“Security forces have shot tear gas and opened fire on people in Zindan square, Saqqez city”, Hengaw, a Norway-based group that monitors rights violations in Iran’s Kurdish regions, tweeted without specifying whether there were any dead or wounded.

Despite heightened security measures, columns of mourners had poured into Saqqez in the western Kurdistan province to pay tribute to Amini at her grave at the end of the traditional mourning period.

Iran’s semi-official ISNA news agency confirmed clashes were taking place in Saqqez, but did not mention the shooting claim.

“A limited number of those present at Mahsa Amini’s memorial clashed with police forces on the outskirts of Saqqez and were dispersed. Following the scattered clashes, the Internet in Saqqez was cut off due to security considerations”, the agency reported, adding about 10,000 people had gathered.

Amini, a 22-year-old Iranian of Kurdish origin, died on 16 September, three days after her arrest in Tehran by the notorious morality police for allegedly breaching the Islamic dress code for women. Anger flared at her funeral last month and quickly sparked the biggest wave of protests to rock the Islamic republic in almost three years. Young women have led the charge, burning their hijab headscarves and confronting security forces.

“Death to the dictator,” mourners chanted at the Aichi cemetery outside Saqqez, before many were seen heading to the governor’s office in the city centre.

Iran’s Fars news agency said around 2,000 people gathered in Saqqez and chanted “Woman, life, freedom”. But thousands more were seen making their way in cars, on motorbikes and on foot along a highway, through fields and even across a river, in videos widely shared online by activists and rights groups.

Noisily clapping, shouting and honking car horns, mourners packed the highway linking Saqqez to the cemetery eight kilometres away, in images that Hengaw said it had verified.

“This year is the year of blood, Seyed Ali will be toppled,” a group of them chanted in a video verified by AFP, referring to Iran’s supreme leader Ayatollah Ali Khamenei.

“Kurdistan, Kurdistan, the graveyard of fascists,” others were heard singing in a video shared by activists on Twitter. Journalists were unable to immediately verify the footage.

Hengaw said strikes were underway in Saqqez as well as Divandarreh, Marivan, Kamyaran and Sanandaj, and in Javanrud and Ravansar in the western province of Kermanshah.

They had been staying at the Kurd Hotel, but were “taken to the government guesthouse... under guard by the security forces”, it said. Daei has previously run into trouble with authorities over his online support for the Amini protests.

Kurdistan governor Esmail Zarei-Kousha said the situation in Saqqez was calm and dismissed as “completely false” reports that roads into the city had been shut. “The enemy and its media... are trying to use the 40-day anniversary of Mahsa Amini’s death as a pretext to cause new tensions but fortunately the situation in the province is completely stable,” he said, quoted by state news agency IRNA.

Hengaw said most of Saqqez was “empty”, as so many people had left the city to join the ceremony to commemorate Amini.

The social media channel 1500tasvir, which chronicles rights violations by Iran’s security forces, said fresh protests flared elsewhere including at universities in Tehran, Mashhad in Iran’s northeast, and Ahvaz in the southwest.

Oslo-based group Iran Human Rights said the security forces’ crackdown on the Amini protests has claimed the lives of at least 141 demonstrators, in an updated death toll on Tuesday. Amnesty International says the “unrelenting brutal crackdown” has killed at least 23 children, while IHR said at least 29 children have been slain.

More than five weeks after Amini’s death, the demonstrations show no signs of ending. They have been fuelled by public outrage over the crackdown that has claimed the lives of other young women and girls.

Iran’s Forensic Organisation said in a report this month that Amini’s death “was not caused by blows to the head and vital organs and limbs of the body”. But lawyers acting for her family have rejected the findings and called for a re-examination of her death by another commission.

Iran announced sanctions on Wednesday targeting individuals and media outlets in the European Union, in retaliation for the bloc’s punitive measures imposed last week on the morality police and other officials over the crackdown.    (France24/Reuters/AFP)

More on this topic
Iran protests 2022: Shirin Ebadi: "Iran will be democratic one day"How feminist are the protests in Iran? The struggle for self-determination Iranian lawyer appeals for solidarity: "Iranian women need the world's help"
Home
Print
Newsletter
MoreAll Topics

END_OF_DOCUMENT_TOKEN_TO_BE_REPLACED
Social media
and networks
Subscribe to our
newsletter