The potential political consequences of shifting class dynamics remain difficult to predict. While some within the circles of power repeatedly emphasise that social issues are a ticking timebomb, according to renowned Iranian social historian Touraj Atabaki the Islamic Republic seems to have lost all interest in improving the situation of workers and other groups facing economic insecurity. This neglect of social issues is presumably related to the huge influence of Iran’s oligarchic elite.

Ahmadinejad, who deliberately addressed the lower classes, at least in his slogans, and presented programmes designed to assist them, was an exception to this general rule. Other politicians have repeatedly attempted to emulate Ahmadinejad’s recipe for success. In the 2017 presidential elections, for example, Mohammad Bagher Ghalibaf, a military man and then mayor of Tehran who is now the speaker of parliament, ran on a pledge to address social inequality, claiming that 4% of Iranians had seized the country’s wealth whereas he represented the remaining 96%.

Ebrahim Raisi – chief justice for three years and former custodian and chairman of the religious/commercial Astan-e Qods-e Razavi bonyad (charitable trust) – has also attempted to score points by taking an anti-corruption stance, both in 2017 and at present. Four years ago, he drew attention to Iran’s 16 million slum dwellers in order to attack the incumbent Rouhani, who had failed to keep his economic promises. 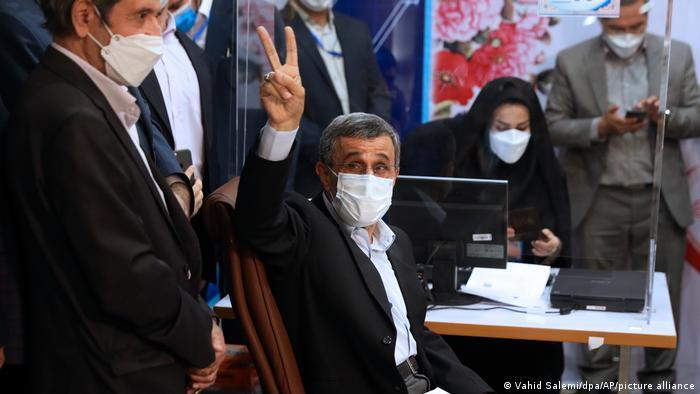 A threat to the system? Many polls suggested that populist former president Ahmadinejad would have been a promising candidate. Yet the Council of Guardians has repeatedly refused to allow him to stand, also in 2021 – security forces recently surrounded his home as a precautionary measure after it was announced that the Council of Guardians had prevented him from running

However, these populist endeavours proved unsuccessful in the last elections in 2017, as Ghalibaf and Raisi lacked credibility and a convincing programme. It is therefore no surprise that many polls suggested Ahmadinejad might still be a promising candidate in those presidential elections. Yet the Council of Guardians has repeatedly refused to allow him to stand, also in 2021. It recently became apparent how much the regime fears him when security forces surrounded his home as a precautionary measure after the announcement that the Council of Guardians had prevented him from running.

There is no reason to believe that the social question will become less of a burning issue in the Islamic Republic – quite the contrary. The middle class goes on shrinking. Poverty and sky-high rents that push tenants out of city centres long ago ceased to be lower-class problems and are increasingly affecting the middle class. A few months ago, it was reported that many middle-class families could no longer afford meat, and that queues had therefore formed to buy chicken skin. Some sources indicate that demand for meat and fish has fallen at least 50% over the past year.

In addition, the Islamic Republic suffers from a glaring lack of political freedoms, which also thwarts social justice. Left-wing, socialist or social-democratic parties or movements – although part of the country’s modern political culture alongside nationalism and Islamism – are not allowed to operate or present candidates in elections. Independent trade unions face massive pressure and key labour leaders are repeatedly arrested.

Social justice nevertheless remains an important issue for the people of Iran. Given the lack of parties or movements that focus on social issues, Iranians are looking for alternatives. However, none of the protagonists that operate within the system prioritise this topic. Reformists, long overrated in Europe as offering new hope, pay it the least attention of all: key representatives of the reform camp made clear statements opposing both nationwide protests in recent years as they unfolded, insulting the protesters as inferior or "vultures". Reformers and conservatives alike belong to a power elite that explicitly opposes social democratic values and policies: neither seeks true democratisation nor tackles the vital social issues.

As a result, a vicious circle has become entrenched: as a result of ignoring social issues, reformist presidents or those lauded as moderate by the West (such as Khatami and Rouhani) repeatedly pave the way for the rise of right-wing populist challengers (Ahmadinejad and today Raisi).

A need for genuine structural change

The social question is a true powder keg. Addressing it seriously would entail challenging almost all of the Islamic Republic’s power centres. Structural corruption and nepotism, monopolisation of political and economic power, and animosity towards the United States (and thus the burden of sanctions) are among the important factors that generate social disparities. Yet it is impossible to fix these problems without making structural changes to the system.

Against this backdrop, the social question will remain unresolved no matter which candidate becomes president in June. (At the moment, many indicators point to Raisi). Further social protests, which often rapidly take on a political twist, are thus inevitable.

Reviving the nuclear deal could certainly help the regime stabilise the economy to some degree and obtain financial resources to subsidise vital goods like flour, meat, electricity, or gasoline, making these products more affordable for more Iranians. The system’s inherent social inequalities, though, would still persist. Instead of long overdue structural reforms, a resurgence of populist economic policies looks more likely.

The regime continues to fear another eruption of popular rage. The many protesters who took to the streets in 2019 – as many as 200,000, even according to official figures – have little to lose. The pseudo-choice between reformists and conservatives no longer stems public fury. This makes protesters unpredictable and dangerous for an elite that holds power, yet has no response to the demands raised by demonstrators nor anything whatsoever to offer them, either economically or politically.

Ali Fathollah-Nejad is a political scientist and author of the recently published Iran in an Emerging New World Order: From Ahmadinejad to Rouhani. He formerly worked as an expert on Iran at the Brookings Institution in Doha (BDC) and the German Council on Foreign Relations (DGAP). He received his doctorate from SOAS University of London.

Arash Sarkohi received his PhD in political philosophy from the Free University of Berlin and works as a research assistant in the German Bundestag. He publishes in German and Persian on Iranian politics, culture and contemporary history. He is also the author of Der Demokratie- und Menschenrechtsdiskurs der religiösen Reformer in Iran und die Universalität der Menschenrechte (2014).

On Friday, Iranians head to the polls to elect a new president. What's at stake in this presidential election? Sanam Shantyaei explains. END_OF_DOCUMENT_TOKEN_TO_BE_REPLACED

For centuries, the great classical Persian author Hafez has inspired German writers. Translations, adaptions and homages have been created in his wake, and the process continues ... END_OF_DOCUMENT_TOKEN_TO_BE_REPLACED

In the run up to Iran’s presidential election, Supreme Leader Ayatollah Ali Khamenei has sought to entrench his power. Alex Vatanka asks whether a sharp slump in voter turnout ... END_OF_DOCUMENT_TOKEN_TO_BE_REPLACED

Turkey's parliamentary and presidential elections are scheduled for June 2023. But they are already casting a shadow. While the opposition is calling for early elections, ... END_OF_DOCUMENT_TOKEN_TO_BE_REPLACED

END_OF_DOCUMENT_TOKEN_TO_BE_REPLACED
Social media
and networks
Subscribe to our
newsletter