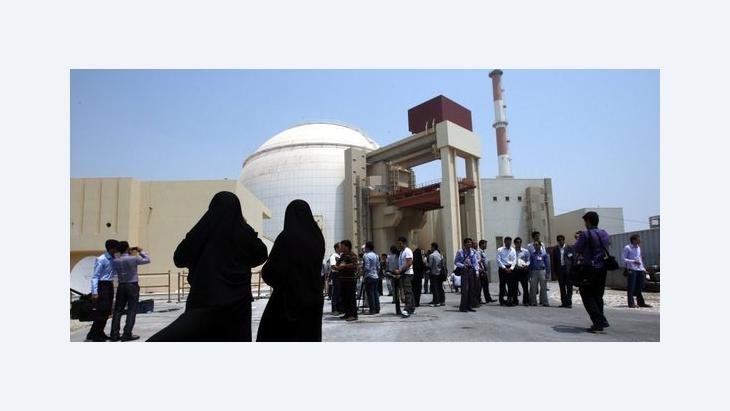 Iran's nuclear programme has been a focus of international concern for over a decade now. From the very start, more has been at issue here than mere technical details or international law as it applies to the programme. Playing the main role instead are ideological positions and geo-strategic interests. An analysis by Walter Posch

In Tehran, where foreign policy is still mainly motivated by ideology, the powers that be assume that sooner or later all pro-Western governments in the region will be toppled because, the way they see it, the cultural differences between the masses and the elites are too extreme.

The feeling is that in the medium or long term, these elites are sure to be driven from power through elections or pressure from the street, which is why revolutionary leader Khamenei looks positively on the "Arab Spring".

The pro-Western elites will then be replaced by new ones that are westernised to a lesser extent or not at all, and hence less inclined to cooperate with the USA. This will then inevitably lead to the end of Western hegemony over the Islamic world. 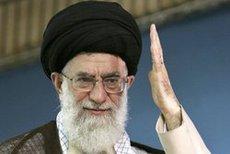 Ali Khamenei, revolutionary leader and spiritual head of the Islamic Republic, has portrayed the popular Arab uprisings as a legacy of the Iranian Revolution of 1979

​​Following this logic, it is only a matter of time until the USA withdraws from the region and the "Zionist regime", i.e. Israel, disappears, in keeping with the example of apartheid in South Africa. At the end of this process would then come a peaceful economic, cultural, political and perhaps even military "south–south integration", in which Iran, thanks to its size and location, would play a central role.

Until this vision can become a reality, though, Tehran must strengthen its own role both as regional power and leading Islamic force. The problem is that there has been very little to date with which Tehran might underpin its claims to leadership in the region. After long years of war with Iraq (1980–88), Iran's economy and military were just as exhausted as those of its arch-enemy Iraq. Against this backdrop, the resumption of the nuclear programme seemed like the ideal way to shore up its leadership aspirations in the region.

For one thing, a nuclear programme is cheaper and less complex in relative terms than building up a modern, powerful army with an air force and navy. Even today, the Iranian army, though relatively strong in numbers, has faced major problems in modernising its equipment. It also displays serious shortcomings in anti-aircraft defence, the air force and the navy. This is in stark contrast to the neighbouring Arab nations, which are armed by the West with state-of-the-art defence technologies.

Of equal importance to potential military aspects, however, are development policy goals: in the Islamic Republic of Iran, nuclear technology is seen as the prime indicator of technological progress. Public declarations frequently refer with pride to the achievements of the country's engineers. 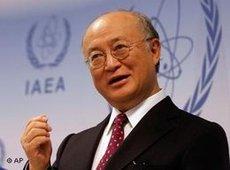 Growing pressure on Iran: on 17 November, the director of the International Atomic Energy Agency (IAEA), Yukiya Amano, called on Iran to respond without delay to the charge of harbouring a secret nuclear weapons programme

​​The significance of this aspect becomes especially clear upon realising how much popular support the nuclear programme enjoys. Even if much of this popularity can be attributed to state propaganda, it can still be concluded with some certainty that Iran's citizens stand behind the – ostensibly peaceful – nuclear programme. As a matter of fact, it is probably the only project for which the regime enjoys the support of broad segments of society.

The West has not objected to the development policy aspects of the Iranian nuclear programme, in other words, to the training of engineers and the build-up of the corresponding technological and academic infrastructure. On the contrary, several diplomatic overtures – for example in 2005 and 2009 and in particular from the EU3+3 (China, France, Germany, Russia, the UK and the US) in 2008 – demonstrate that the Islamic Republic's right to the peaceful use of nuclear technology has not been denied, but has actually been explicitly acknowledged.

In the final analysis, however, relations have come up against a mutual lack of trust that was ignited by the issue of the "right to uranium enrichment".

A question of national honour

The so-called "right to uranium enrichment", in other words, the right to utilise the full fuel cycle, has been elevated by Tehran propagandists to a matter of national honour. This right is not in fact documented in the Nuclear Non-Proliferation Treaty, but many nations, primarily those in the developing world, infer this entitlement from the right to peaceful use of nuclear energy.

The problem is that uranium enrichment is the key technology that opens the gate to the production of weapons-grade fuel, i.e. to a nuclear weapons programme, and that fact alone can indeed be used by the Islamic Republic to support its claim to leadership in the region, even without producing a single nuclear weapon.

A nuclear-arms-capable Iran would have to be accepted in the region as a de facto nuclear power and hence as the dominant regional power. This would have a number of consequences for the region's nations. First of all, it would deal a severe blow to Saudi Arabia, which would then clearly fall behind in the leadership ranks. Furthermore, the small countries lining the Gulf would be forced to align their foreign and security policy to Iran's "virtual" nuclear power, which would also prove detrimental to Saudi influence.

Most deeply affected by Iran's nuclear weapons capability, however, would be the state of Israel. This is primarily because Israel's nuclear monopoly in the region would then be broken (Pakistan's nuclear weapons are aimed at India, and are therefore not part of the strategic equation for the Middle East).

Israel is coming under fire from other sides as well: following Egypt's diplomatic initiative, almost all nations in the region have signed the Nuclear Non-Proliferation Treaty and additional relevant international agreements on the limitation of weapons of mass destruction. Diplomatic pressure on Israel to follow suit is accordingly very high. 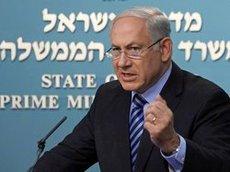 Israeli Prime Minister Benjamin Netanyahu: "A nuclear Iran poses a threat to the Middle East and the entire world, and naturally also poses a direct threat to us."

​​Moreover, the international community is calling for a zone without weapons of mass destruction to be set up in the Middle East. Should these efforts succeed, Israel would be able to maintain the technical possibilities to produce nuclear weapons, but would have to give up its existing nuclear arsenal – meaning it would effectively be disarmed in nuclear terms while Iran would maintain nuclear capability. This scenario appears unlikely at the moment, but could come to pass in the medium to long term, and is time and again raised at the UN as a political demand.

It is no wonder, then, that it is the Israelis who are voicing the sternest criticism of the Iranian nuclear programme. What's more, the aggressive Iranian rhetoric (Holocaust denial, talk of annihilating Israel) has convinced the people of Israel that the Islamists in Tehran are actively working to destroy Israel, thereby increasing public pressure on the Israeli government to put up a tough front against Tehran.

Tehran, for its part, finds itself facing a dual challenge. On the one hand, it wants to avoid a military confrontation at all costs and is therefore acting within the scope of the Nuclear Non-Proliferation Treaty and other international agreements. This is why Iran is cooperating with the Vienna-based International Atomic Energy Agency (IAEA) and negotiating with the EU3+3. On the other hand, the Islamic regime must drive forward the technical development of its programme if it is to bolster its claim to hegemony in the region.

This contradiction can be illustrated by an important example: although Iran has signed the Additional Protocol to the Nuclear Non-Proliferation Treaty, it is not yet putting it into practice. The result is a total loss of trust between Iran and the international community, represented by the EU3+3.

When the last round of talks in January 2010 failed, UN Resolution 1929 (June 2010) was passed. This resolution provides for far-reaching sanctions against Iran. Since that point at the latest, a new reality has prevailed in international law that Tehran has either tried to circumvent – for example through its attempt to push through a special provision with the help of Brazil and Turkey – or to ignore altogether by trying to return to the former status quo.

Increasing tensions during the past few months must be seen in the light of this atmosphere of distrust, ultimately traceable to the fact that Tehran attaches greater importance to its ideological visions for the region than to nuclear reality.

Walter Posch is an Iranist and is currently researching transformation processes amongst the Iranian neo-fundamentalists on behalf of the German Institute for International and Security Affairs (SWP) in Berlin.

Since returning to power in Afghanistan, the Taliban have steadily eroded the rights and opportunities of women and girls, particularly their access to education. But Afghans are ... END_OF_DOCUMENT_TOKEN_TO_BE_REPLACED

The book "The Invention of the Maghreb: between Africa and the Middle East" prompts us to review basic terminology. This includes terms that we use almost every day as if they are ... END_OF_DOCUMENT_TOKEN_TO_BE_REPLACED

Tunisia has been going through a severe economic and political crisis in recent years. More than one in three young people there are unemployed. For many skilled, qualified and ... END_OF_DOCUMENT_TOKEN_TO_BE_REPLACED

At the end of every year, the team at Qantara.de gives you a run-down of the ten most-read articles on the site over the past 12 months. Here is a quick overview of the stories ... END_OF_DOCUMENT_TOKEN_TO_BE_REPLACED

The government in the Netherlands, one of the last European nations to abolish slavery, has made an historic apology. But some feel that there is still a long way to go. By Ella ... END_OF_DOCUMENT_TOKEN_TO_BE_REPLACED

To celebrate the bicentenary of the deciphering of the Rosetta Stone, the British Museum is running an exhibition entitled "Hieroglyphs: unlocking ancient Egypt" until February ... END_OF_DOCUMENT_TOKEN_TO_BE_REPLACED
Author:
Walter Posch
Date:
Mail:
Send via mail

END_OF_DOCUMENT_TOKEN_TO_BE_REPLACED
Social media
and networks
Subscribe to our
newsletter