Starting 29 May, the "Epic Iran" show at London's Victoria & Albert Museum delves into 5,000 years of art, design and culture of the country. By Louisa Schaefer 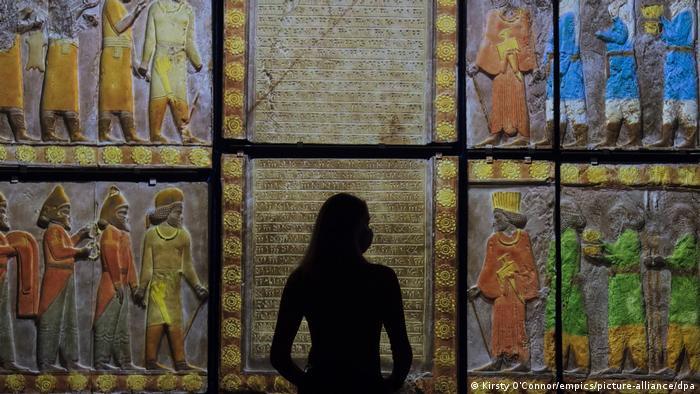 Shedding light: the show at the V&A aims to shine light on "one of the greatest historic civilizations, its journey into the 21st century and its monumental cultural achievements," the V&A said, adding that many of Iran's cultural accomplishments have remained in the shadows. Here, a museum staff member views a colour projection of "Tribute to Ahuramazda" (359-338 BC), ahead of the "Epic Iran" exhibition 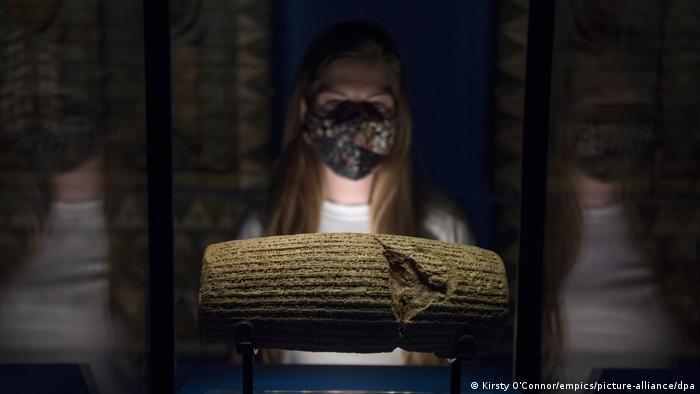 'Cyrus Cylinder,' 539-538 BC: the Persian Empire was comprised of influential dynasties from the 6th century BC onward. Iran, formerly known as Persia, is home to one the world's oldest continuous major civilizations. This clay "Cyrus Cylinder" from around 539 BC depicts what some call a "human rights charter" in cuneiform script in the name of Persian king Cyrus the Great 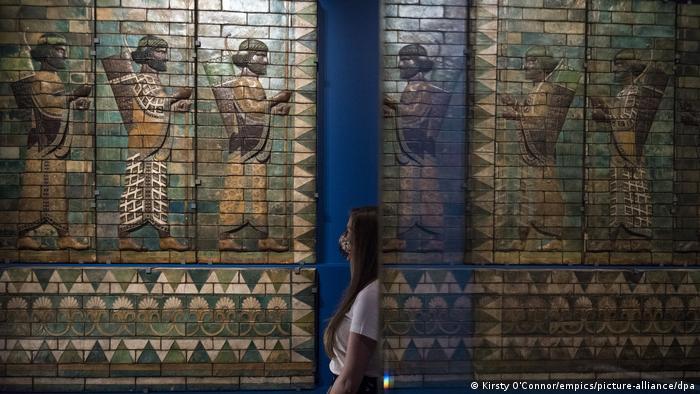 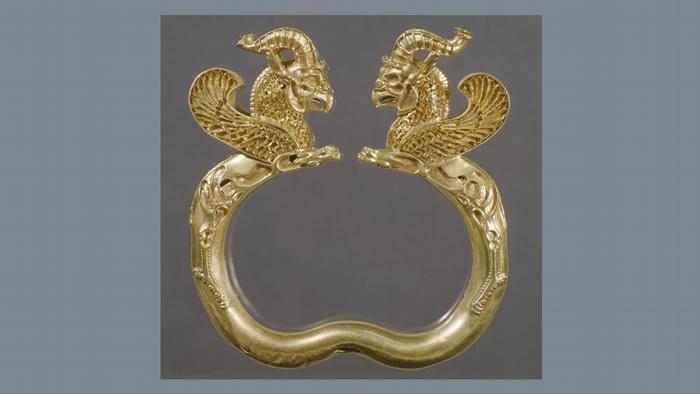 Golden bracelet, 500-330 BC: this armlet from 500-330 BC is shown in "The Persian Empire" section. The First Persian Empire, founded by Cyrus the Great around 550 BC, became one of the largest empires in history, stretching from Europe's Balkan Peninsula to India's Indus Valley. The Iron Age dynasty was a massive hub of religion, science, art and technology for hundreds of years before it fell to Alexander the Great's armies 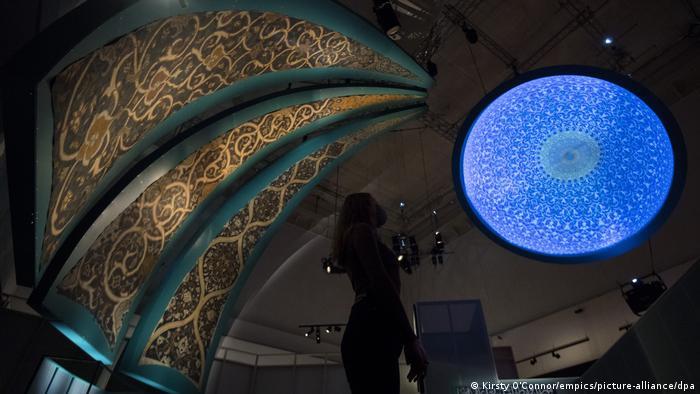 In awe of cultural achievements: the show encompasses 10 sections, including "Emerging Iran", "The Persian Empire" spanning the Achaemenid period, "Change of Faith", which looks at the role of Islam in Iranian culture and "Literary Excellence", showcasing Persian poetry. This projection includes recreations of tiled interiors of mosque domes in Isfahan, Iran 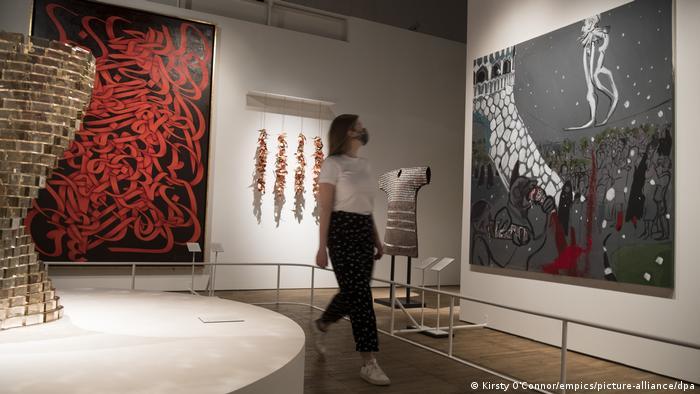 From the past to the present: here, ahead of the exhibition, a museum staff member walks past collections from modern and contemporary Iran, including calligraphic artist Mohammed Ehsai's 2003 painting, 'Oo Bakhshandeh Ast' (Persian for "He is merciful", pictured left). To the right one can see 'The Anniversary of the Islamic Republic Revolution', 2007, by Rokni Haerizadeh 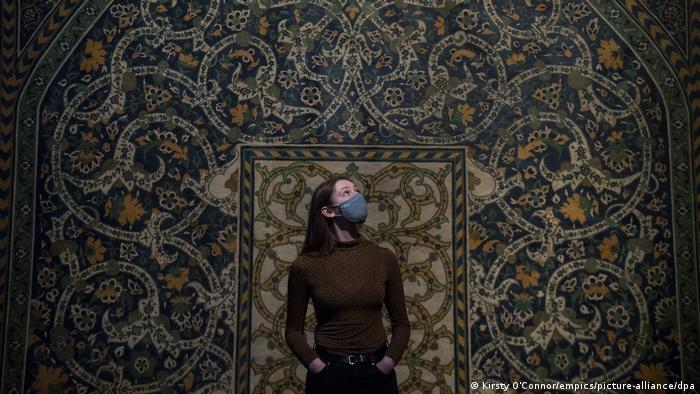 Rich in history: "It's only quite recently that people are recognising that Iran has got this wonderful, rich artistic tradition, wonderful cultural heritage stretching back many, many, many years," co-curator John Curtis told Reuters news agency. Here, a museum staff member in front of a full-size reproduction of a tilework from 1877 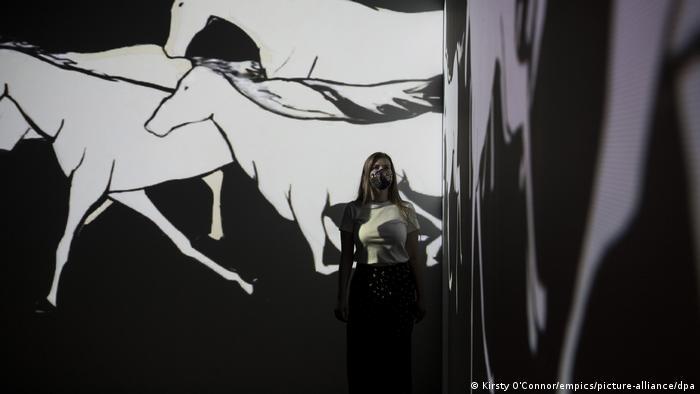 Major impact: the Persian Empire was a trailblazer in unifying diverse peoples and cultures into one massive heterogeneous state – leading to the sharing of intellectual and technological advances. It set standards for tax, postal and canal systems, for reliable roads for improved communication and trade across the empire, and for standardised weights and measurements. Here, a 2016 work by Avish Khebrehzadeh 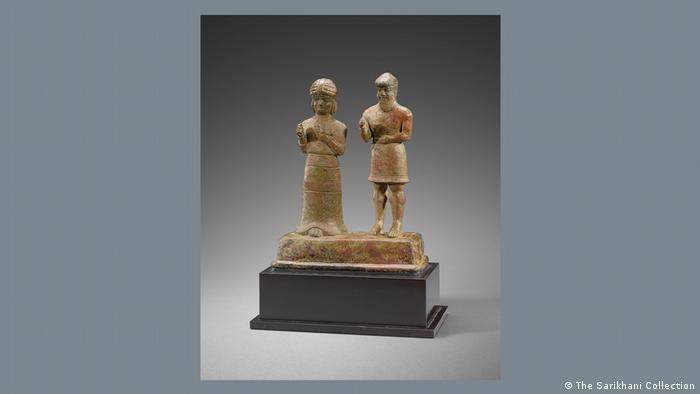 'Group of two figures': this bronze couple, with their hands clasped in prayer, dates from the Middle Elamite period, between 1500-1100 BC. The figures were found during French excavations of Susa (modern-day Shush in Iran) in the early 20th century 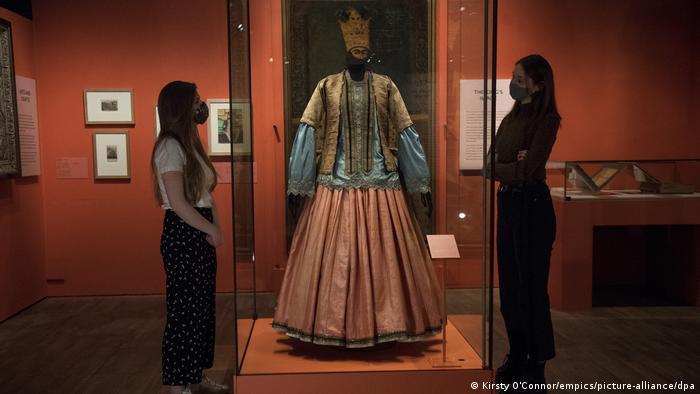 The evolution of things: V&A staff view a woman's jacket, blouse and skirt from 1840-50 on display ahead of the exhibition. The artefacts on show were either collected over time by the museum or are on loan. "Obviously, it's been a very difficult time to put together an exhibition ... it hasn't been possible to bring objects from Iran," co-curator Curtis explained, referring to the COVID pandemic and other challenges 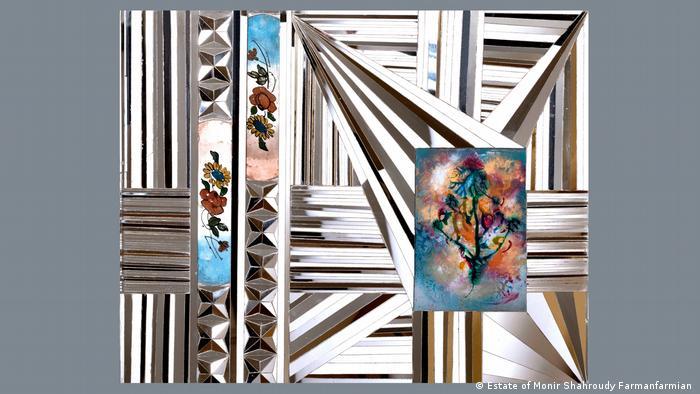 'Untitled,' by Monir Shahroudy Farmanfarmaian, 1974: the final section of the exhibition, titled "Modern and Contemporary", looks at artworks from Iran from the 1940s to the present day. It showcases the flourishing of modern art – like this untitled, 1974 piece by Monir Shahroudy Farmanfarmaian – until the dramatic events of the 1979 Revolution and the Iran-Iraq War 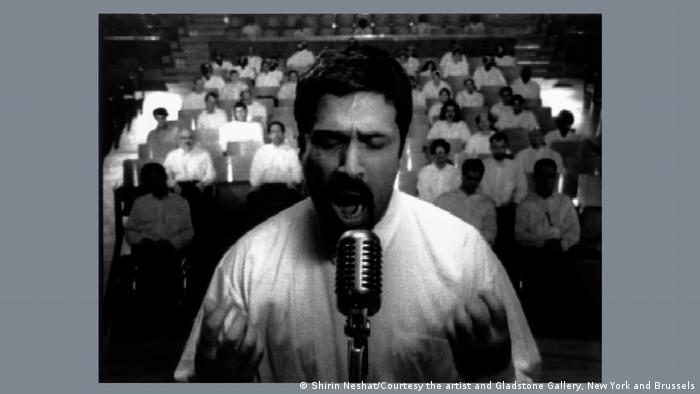 'Turbulent,' 1998: organised by the V&A with the Iran Heritage Foundation in association with The Sarikhani Collection, the show aims to illustrate Iran's rich contribution to international culture. Here, an excerpt from the 1998 work titled "Turbulent" by Shirin Neshat – a two-screen film installation that won the critically-acclaimed artist the "Lion d'Or" at the Venice Biennale in 1999 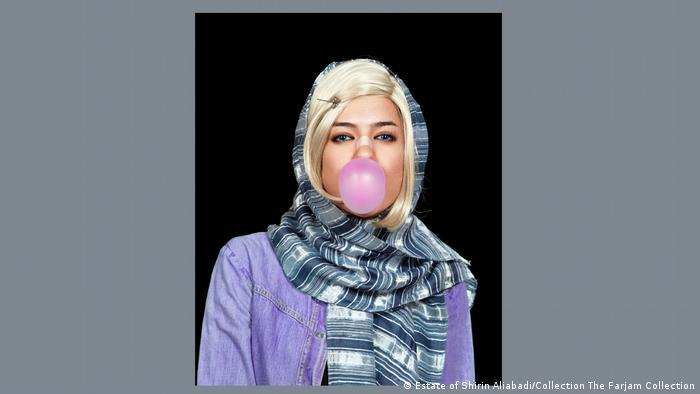 'Miss Hybrid #3', 2008: "The exhibition will offer a fresh perspective on a country that is so often seen through a different lens in the news," the V&A said. That vibrant perspective is perhaps reflected in this work by Shirin Aliabadi, titled "Miss Hybrid #3", from 2008. The exhibition runs 29 May – 12 September 2021

END_OF_DOCUMENT_TOKEN_TO_BE_REPLACED
Social media
and networks
Subscribe to our
newsletter