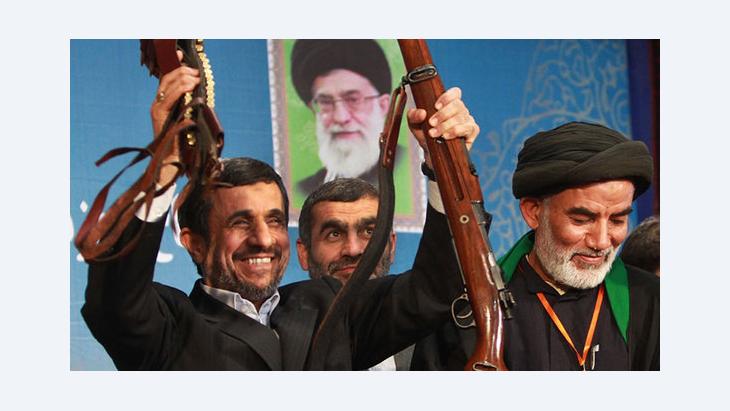 On the Edge of the Abyss

﻿The everyday lives of the Iranian people look set to be dominated by rationing and food coupons. And four months ahead of presidential elections, a bitter power struggle has been raging – one that is turning out to be a veritable struggle for survival for some of those involved. By Ali Sadrzadeh

The findings are objective, plain and read like an unambiguous warning: "The basic foundations of the state are in ruins," is the summary of 43 economists at the University of Tehran, expressed in an open letter to the President. The letter was the top story last week for many Iranian newspapers and websites. In it, the economists sketch a gloomy picture of the present and warn against a terrible future that could be ushered in sooner than feared.

The professors say that horrendous inflation is driving the overriding majority of Iranians into unimaginable poverty and that the possibility of social unrest cannot be ruled out. The university lecturers are basing their analysis exclusively on official data. But even these moderated figures speak a clear language: According to Iranian Oil Minister Rostam Ghasemi, over the past few months oil exports – or in other words state revenues – have shrunk by almost 50 percent.

Of the top ten nations with the highest rate of inflation, Iran is currently ranked in third place. There are virtually no banking connections with foreign nations, there is barely any foreign currency entering the country, and the national currency the Rial has lost half its value within a year.

Accelerated decline: Iran's national currency, the Rial, has lost half its value within a year. Even Iranian economists say that blame for this unprecedented misery cannot be laid solely at the door of international sanctions, but that it is mostly due to government policies

​​The economists say that blame for this unprecedented misery cannot be laid solely at the door of international sanctions, but that it is mostly due to government policies, which are serving to accelerate the decline. All just election campaign bluster, countered Ahmadinejad in his most recent television interview last Sunday (3 March).

Bracing for a popular uprising

To a certain extent, the President is correct. It is indeed due to the presidential election campaign that the professors are allowed to express themselves so openly. But the government is also worried about social unrest – a concern expressed openly and repeatedly by security authorities in recent weeks. There is talk of what is described as a "worked up crowd" that needs to be kept under control.

The commander of the Basij paramilitary force General Naghdi had already predicted early in January that on this occasion, the enemy would try to incite people in the provinces – in contrast to four years ago in the big cities. "But we're prepared for anything," he reassured a gathering of journalists at the time.

Three weeks after this interview, the website "Iran Diplomacy" casually reported that a group of senior officers was in Russia being trained in techniques of rebellion control. So that no doubts arise as to their resolve, security forces have been conducting regular manoeuvres in the provinces against an imaginary enemy for weeks now.

Food stamps during an election campaign

As well as the use of force and the deployment of the intelligence agency, there are also ways of reigning in a potential rebellion on a civilian level. To mark the Persian New Year, the government plans to give a sum of money worth between 30 and 50 Euros to some 80 percent of Iranians, and last Monday (25 February) parliament approved a food stamp system for staples (oil, rice, potatoes and meat) for impoverished families. 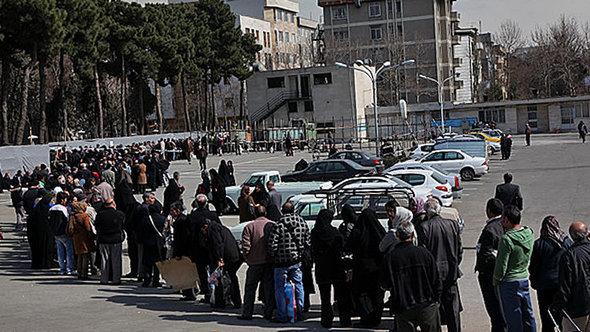 Standing in line for food: Economists like professor Jamshid Asadi of the American University in Paris say the return of a wartime economy in Iran is likely to be coming up. Older Iranians are familiar with the system of rationing and distribution, as it was part of everyday life during the eight years' war with Iraq (1980–1988)

​​The parliamentary bill stipulates that the plan will be modified every three months, and that the government must specifically earmark the necessary funds for it in the upcoming budget.

This signifies the return of a wartime economy, says economics professor Jamshid Asadi of the American University in Paris. He adds that Iranians are very familiar with the system of rationing and distribution, as it was practically part of everyday life during the eight years' war with Iraq.

But Ahmadinejad has not yet presented parliament with a budget plan for the next year, which begins on 20 March. Deputies only intend to approve a budget for three months, until the end of June, when Ahmadinejad's tenure also draws to an end. But he has no intention of leaving the political stage without much ado, because he realises he now has nothing to lose.

During the last few months of his presidency, he has been presenting himself as a simple man of the people fighting tirelessly against the powerful, rich and corruption-tainted families and gangs. His spectacular and crafty approach was revealed in a parliamentary debate early last February, when he played video footage – secretly recorded – purporting to be negotiations over a bribe totalling 30 million Euros. 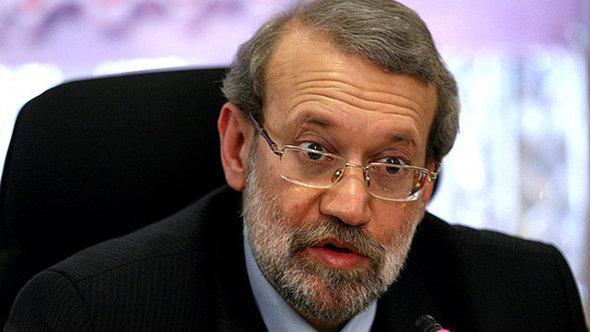 "Despicable mafia methods": Last month, Ahmadinejad created an uproar by publicly accusing relatives of parliamentary speaker Ali Larijani of using their positions for financial gain. Larijani came back swinging with his own set of insults and accusations. Larijani, member of an influential conservative and religious family who lost to Ahmadinejad in the 2005 election, has since kept up an intense rivalry with him

​​The footage pointed the finger at the clan of parliamentary speaker Ali Larijani, which Ahmadinejad claimed was at the centre of this deal. The accusations were derided by Larijani himself as "nothing more than Robin Hood games" and "despicable mafia methods".

The unusual reaction of the parliamentary speaker demonstrates that Ahmadinejad and his revelation tactics should be rightly feared. After all, it is a method he has previously used to good effect. This is exactly how he wrested power from the omnipotent Rafsanjani clan four years ago. "That was a masterstroke of populism, coupled with brazen cheek, ruthlessness and also brutality," recalls Modjtaba Vahedi, advisor to detained opposition leader Mehdi Karrubi.

But this time Ahmadinejad is way off the mark, because he has in the meantime disregarded the popular revolutionary leader, says his brother Davood, who these days only has bad words to say about his younger brother. Times have indeed changed and loyalties along with them.

In everything that he is doing, if Ahmadinejad had the full support of revolutionary leader Khamenei four years ago, he must also fight against Khamenei on this occasion. This is why the President has fallen out of favour to such an extent that several newspapers and websites loyal to Khamenei are seriously speculating over when exactly Ahmadinejad will be arrested after the presidential poll.

He knows this, and this is why he is trying to push one of his men as presidential candidate – preferably his friend, some say his master – Esfandiar Rahim Mashaee. This is the only way for him to escape the retribution of his powerful opponents.

Satirist Ibrahim Nabavi says Ahmadinejad is basically looking for life insurance. If the election campaign is conducted in accordance with the usual methods of the Islamic Republic, then an ally of Khamenei will again be the next president and thereafter, Ahmadinejad's days as a free man will be numbered, writes the well-informed website "Baztab".

But Ahmadinejad is putting up a combative front, promising an Iranian "spring" in an allusion to the Arab Spring, and at the same time threatening to expose other powerful figures. The Internet bazaar of speculations and suspicions opened for business long ago – it remains to be seen where the finger will point next, and for what kind of misdemeanours.

Home
Print
Newsletter
More on this topic
Turning away from Shia in Iran: ''A Tsunami of Atheism''Ahmadinejad and Iran's Supreme Leader: Showdown in TehranPower Struggle in Iran: The Might of Oil
Related Topics
Ayatollah Ali Khamenei, Democracy and civil society, Iranian nuclear programme, Iranian opposition, Media in Iran
All Topics

Over ten years after the publication of "Censoring an Iranian Love Story", Shahriar Mandanipour's latest novel, "Moon Brow", is now available in German translation. This is a ... END_OF_DOCUMENT_TOKEN_TO_BE_REPLACED

Saudi Arabia has spent the past five years fighting off Iran-backed Shia rebels in a seemingly endless conflict that has cost more than 100,000 lives and left 80% of the ... END_OF_DOCUMENT_TOKEN_TO_BE_REPLACED

Saudi Arabia has called on Muslims across the world to put their hajj preparations on hold for the time being. The corona pandemic is impacting one of the central pillars of ... END_OF_DOCUMENT_TOKEN_TO_BE_REPLACED

According to the latest Reuters tally, more than 2.54 million people are now reported to have been infected by the novel coronavirus globally and 177,004 have died. As Muslims ... END_OF_DOCUMENT_TOKEN_TO_BE_REPLACED

Plagued by troubled state-citizen relationships on the one hand and conflict on the other, states in the Middle East could discover new uses for COVID-19 lockdown measures. By ... END_OF_DOCUMENT_TOKEN_TO_BE_REPLACED

END_OF_DOCUMENT_TOKEN_TO_BE_REPLACED
Social media
and networks
Subscribe to our
newsletter