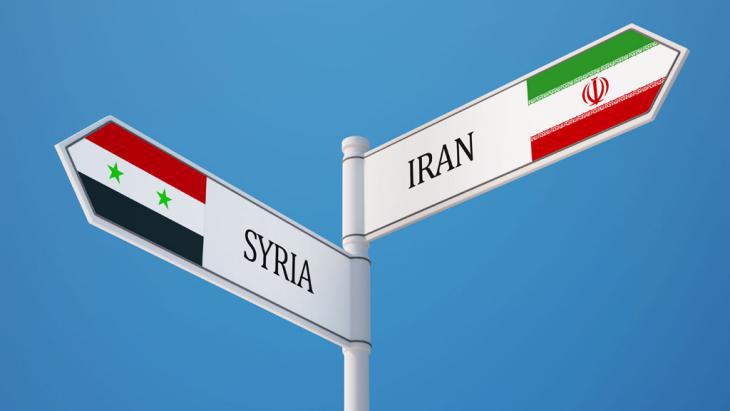 Is Iran part of the problem or part of the solution to the conflicts in the Near and Middle East? There are actually good arguments for both points of view. By Bahman Nirumand

There are plenty of good reasons to regard Iran as a major threat not only to the whole of the Middle East, but also to the cause of world peace: its close alliance with the Syrian dictator Bashar al-Assad, its military and financial support for Hezbollah in Lebanon, Hamas and Islamic Jihad in Palestine, the Houthi rebels in Yemen, and Shia minorities in Persian Gulf states, as well as its hostility to Israel. Moreover, there is no doubt in the minds of sceptics that Iran is striving to build nuclear weapons.

Optimists, on the other hand, point to Iran's willingness to compromise in negotiations on its nuclear programme, to Tehran's desire to normalise relations with the US and the EU, Iran's role in the fight against the Taliban and its role in the reconstruction of Afghanistan and, more importantly, its efforts to combat the militias of "Islamic State" in Syria and Iraq.

Regardless of one's point of view, it is clear that all attempts to isolate the Islamic Republic or bring about a change in regime have thus far failed completely. As a result of the wars in Afghanistan and Iraq, the policies of the West in both Syria and Libya, and Israel's policies towards the Palestinians, Iran has become a regional super-power.

Mostafa Sahari is, therefore, quite right when he says that "over the past few decades, Iran has been seen as part of the problem; now it is regarded as part of the solution." Sahari was the director of a conference that took place in Tehran last December under the motto "Together against Extremism." 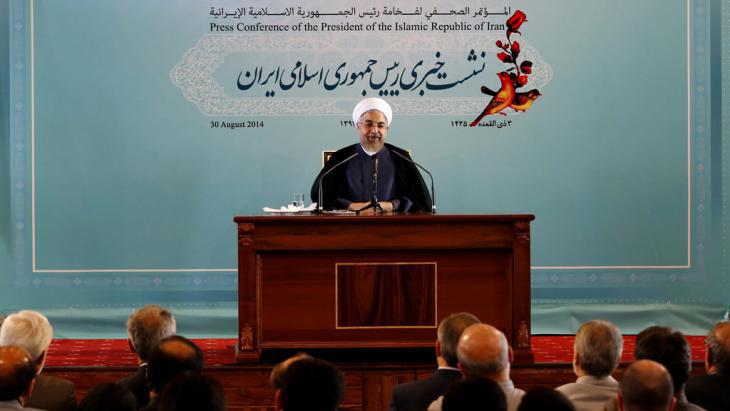 Iran's new international role in the battle against Islamic State: Iranian President Hassan Rouhani (pictured here at a press conference in Tehran on 30 August 2014) has said that Iran plays an important role in the fight against terrorism and for peace in the region. He has also made it clear that Iran has been helping Iraq to stop IS's march on Baghdad. Rouhani is convinced that there is no alternative to a constructive relationship between Iran and the West

Iran in the fight against IS

Iran has long attempted to establish a coalition of neighbouring states that would act as an alternative to Western intervention in the fight against IS. Some 40 countries were represented at the conference, which was attended by the foreign ministers of Iraq and Syria. Iran's President Hassan Rouhani addressed participants, saying that an alliance of regional states against IS would be far more effective than an American-led international coalition.

Iran was one of the first countries to provide the Kurds with military assistance and personnel in their fight against IS. Without this help, which continues to this day and is indeed increasing, IS would probably have achieved far greater success. The regimes in Syria and Iraq have many reasons to be grateful to Iran too. Tehran has provided both countries with massive military assistance. Last July, Iran granted Syria a loan to the tune of 3.6 billion dollars to purchase oil supplies and an additional billion to buy other goods.

In Iraq, Iran is also involved in arming and training Shia militias. It is also supplying weapons to the Iraqi military in its fight against IS. Every day, two to three Iranian military aircraft loaded with weapons and munitions land at Baghdad Airport. In the past year, Iran has sold Iraq around 8.5 billion euros worth of weapons and military equipment, including assault rifles, heavy-calibre machine guns and rocket launchers. Tehran has also attacked the terrorists from the air. In early December, Iranian F4 fighter jets bombed IS positions in eastern Iraq. Iranian military operations against IS continues to intensify.

The question remains, however, as to how this Iranian military involvement is perceived by the USA, in particular, but also by other regional powers. Last November, US President Barack Obama wrote to Iran's Revolutionary Leader, Ali Khamenei, holding up the prospect of co-operation in the fight against IS on condition that agreement could first be reached on the issue of the nuclear conflict. When news of the Iranian aerial attack in Iraq became known, AFP quoted an anonymous Pentagon representative, who spoke of a "tacit agreement between Tehran and Washington". American Secretary of State John Kerry commented that if Iran really was taking action against IS, then "the net effect is positive". 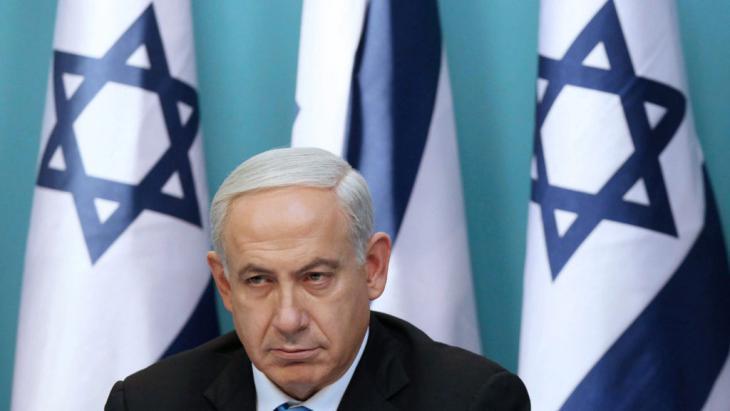 The rapprochement between the governments in Tehran and Washington is plain for all to see. The reaction has been positive in most European states, but not in all regional powers in the Middle East. In particular, Saudi Arabia and Israel fear a restructuring of the American geostrategic and security policy architecture in the region.

Saudi Arabia, which, alongside Israel, has been the most important ally of the US and the EU in the region for decades, fears being sidetracked by a possible integration of Iran into Western policy. For this reason, the Saudis have not passed up any opportunity to weaken Iran and to prevent a rapprochement between Tehran and Washington.

Israel too is resorting to all possible means of hampering co-operation between Iran and America. For some time now, the government of Benjamin Netanyahu has been mobilising all possible forces to wreck any nuclear agreement with Iran. Netanyahu's speech on the Iranian nuclear programme before the joint houses of the US Congress and Senate in Washington is his latest move in his strategy. Given that the Republicans are demanding more severe sanctions against Iran and hold a majority in both houses, Netanyahu was addressing an appreciative audience.

In Iran itself, there are also powerful opponents of moves to normalise relations with the US. The conservatives, whose control over ministries and other instruments of authority is greater than that of the reform-oriented government, fear an accelerated Westernisation of society and a subsequent loss of their ideological base. Although they would like agreement in the nuclear conflict in order to bring about an end to sanctions, they have no desire for a normalisation of relations with the US.

A power struggle is raging between conservatives and reformers in Iran. The outcome of this battle and, especially, relations between other countries and the Islamic Republic will prove decisive in establishing the future character of the regime – whether it will be a rogue state or a country in transformation towards democracy.

One year ago the Taliban returned to power, seizing Kabul; the U.S. and its allies made a panicked exit from the country. Of all the books written on the subject, four stand out ... END_OF_DOCUMENT_TOKEN_TO_BE_REPLACED

In "Iran. Die Freiheit ist weiblich", journalist Golineh Atai describes the dogged resistance of courageous Iranian women against the Islamic Republic and the mullahs who have ... END_OF_DOCUMENT_TOKEN_TO_BE_REPLACED

Unflattering terms were used at a German Football Association human rights congress aimed at "intensifying the discussion" ahead of the World Cup. One speaker in particular made ... END_OF_DOCUMENT_TOKEN_TO_BE_REPLACED

Egyptian authorities have Mada Masr in their sights once again after critical reporting. But the editor of the country's last independent news source is adamant they will continue ... END_OF_DOCUMENT_TOKEN_TO_BE_REPLACED

Like Christianity, Europe's history is one of migration. Both have strong roots in the Orient and in cultures thousands of years old. Cultural historian Bernhard Braun invites us ... END_OF_DOCUMENT_TOKEN_TO_BE_REPLACED

Comments for this article: All options are open

The Price for Freedom

As an American citizen, I sincerely believe that there is more to Iran than most people realize. First: Maybe Iran is playing the game by two or more sides of the board. Second: The Americans are deluding themselves in beliving that Iran cound in fact be on the American side in time or out of time. Third: Allowing multi-governments to have toys that really kill or destroy people is contrary to any religious laws and countries. I find that Iran is in default with itself and with its people.

END_OF_DOCUMENT_TOKEN_TO_BE_REPLACED
Social media
and networks
Subscribe to our
newsletter