Cracks in the Foundation

Little strokes fell big oaks. Despite major repressions, the reform-oriented movement around Mehdi Karroubi and Mir Hossein Mousavi is continuing its protests, discovering new forms of resistance against the regime. By Ghasem Toulany 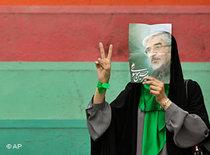 Reinvograted green protest movement: Even the repression of last summer's protest movement has not put the pro-reform activists around Mousavi and Karroubi out of action

​​ Iran's ruling ayatollahs had no doubt imagined a very different 30th anniversary of the occupation of the US embassy in Tehran on 4 November 1979.

Over the past 30 years, the state-organised demonstrations marking the "occupation of the US den of espionage" on 13 Aban of the Iranian calendar helped cement the power of the ayatollahs, lending their rule a certain legitimacy and not least distracting from the countless domestic problems.

Fighting the mullahs with their own weapons

This year, however, saw the mullahs fought with their own weapons – and not for the first time either. The supporters of the "green movement" in Iran, as the protest movement against the results of the presidential elections of 12 June is now called, had already succeeded in taking two other important instruments of the ayatollahs' power into their own hands.

On 17 July, when Ayatollah Hashemi Rafsanjani was given the religious leader's permission to lead Friday prayers in Tehran for the first and last time since the controversial presidential elections, hundreds of thousands of demonstrators had taken to the streets again to protest against Mahmoud Ahmadinejad and the electoral fraud. 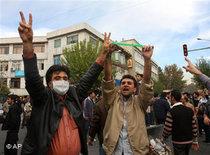 Unbroken resistance: The reformist politicians Mousavi and Karroubi called for their supporters to demonstrate against Ahmadinejad's government on the 30th anniversary of the US embassy occupation

​​ And on 18 September it was the Jerusalem Day once declared by Ayatollah Khomeini, of all days, which became a platform for green protest. Ignoring a ban on anti-government demonstrations and threats from the Revolutionary Guard and security forces, thousands of opposition activists used the traditional rallies on the last Friday of the month of Ramadan for protests against the election results.

While the state-organised demonstrations broadcast messages of hate towards Israel and the USA, supporters of the presidential candidates Mir Hossein Mousavi and Mehdi Karroubi chanted, "Neither Gaza nor Lebanon – our life is for Iran" and "Death to the dictator".

And the ayatollahs were shaking in their boots again on the anniversary of the US embassy occupation in Tehran – even though they had taken numerous preventative measures in advance, stationing high numbers of security forces and militia in the centre of Tehran, troops with no inhibitions when it comes to using violence.

Despite all the threats of the Iranian authorities and not least the infamous Revolutionary Guard, on 4 November thousands of demonstrators once again took to the streets of many Iranian cities.

Over the past 30 years, the anniversary of the US embassy occupation in Tehran had always been an occasion for state-organised demonstrations against the "great Satan" of the USA.

Death to the spiritual leader

This 4 November, however, the religious leader Ayatollah Khamenei got a taste of the Iranians' anger himself: demonstrators tore up posters of his face in Tehran. Previously, it had always been American and Israeli flags that were set alight or trampled underfoot at the state-run demonstrations.

For the first time since the controversial presidential elections, the demonstrators chanted: "Death to the spiritual leader Ali Khamenei!" – previously, Khamenei had been largely spared from public criticism by the opposition activists.

The opposition movement in Iran has now crossed a very important boundary. The ayatollahs, who experienced the Islamic Revolution against the Shah at first hand in 1979, know very well what it can mean for their position when the demonstrators are no longer scared to protest against the most powerful man in the Islamic Republic. 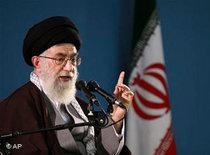 "Death to the revolutionary leader!" – for the first time, opposition activists have openly criticized Ayatollah Ali Khamenei, the supreme spiritual leader of the Islamic Republic

​​ The fact that the Iranian demonstrators' chants are no longer directed solely against the electoral fraud also indicates a new quality of the protest movement in the Islamic Republic of Iran.

Five months of brutal repression have not weakened them; instead, the demonstrators are less and less afraid of the security forces. The green protest movement seems to be unstoppable. Just as the presidential candidate Mousavi had encouraged his supporters to "live with the protest", the protest movement has established itself on a nationwide basis and reached a new dimension.

The supporters of the reform-oriented former presidential candidates Mousavi and Karroubi are no longer looking for their "stolen" votes. They are now calling for a secular "Iranian Republic" to take over from the Islamic Republic founded by Ayatollah Khomeini in 1979.

The respected Iranian journalist Masud Behnoud thinks "something was broken in Iran" on 4 November. Whereas even writing a critical letter to the religious leader was taboo six years ago, the demonstrators have now begun to publicly refer to the regime's most powerful man as a murderer and are questioning his legitimacy in office, Behnoud writes in the online magazine Rouz.

On the countless websites of the green protest movement, 13 Aban is therefore being celebrated as an important initial victory – the day on which the religious leader lost a large part of his authority, activists claim.

Yet Mir Hossein Mousavi and Mehdi Karroubi, regarded as the official leaders of the protest movement in Iran, have repeatedly emphasised that they only want to implement their reforms within the parameters of the country's present constitution. In their view, President Ahmadinejad's government has deviated from the course of the imam (Khomeini) and the constitution. 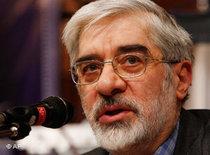 ​​ It would now appear that Mousavi and Karroubi, who both stress they do not question the foundations of the Islamic Republic, no longer enjoy the full support of the reform-oriented elements. And as the government is not prepared to accept reforms within the framework of the current constitution anyway, the protest movement is becoming increasingly radical.

Many activists in the green protest movement are already publicly calling for regime change – they are no longer interested in the reforms favoured by Mousavi and Karroubi.

The countless national and religious occasions previously among the mullahs' traditional instruments of power give the demonstrators plenty of opportunities for protest actions. On the green movement's information websites, for example balatarin.com, preparations for the next protest event were begun only a day after the 4 November demonstration.

The next demonstration is expected on 7 December, this time for Student Day. After that comes the tensely awaited ten-day mourning ceremony marking the Islamic month of Muharram, beginning this year on 18 December.

The green protest movement's idea of using national and religious occasions was first suggested by Mousavi immediately after the presidential elections, when he called for his supporters to shout "God is great!" from the rooftops.

As time goes on, the opposition activists are using all the traditional instruments of power in the Islamic Republic for their own ends. One thing is clear: at the end of this conflict, nothing in Iran will be the same as it once was.

Political events in Iran are taking on a new dynamic. A nationwide mass demonstration could even ring in radical change overnight. So the longer the regime – and above all Ayatollah Khamenei – refuses to respect the will of the people, the more the possibility of saving the system as a whole dwindles away. An even more brutal repression of the protest movement – like after the presidential elections – could no longer halt this process.

Nor should it be forgotten that the ayatollahs are currently fighting on two political fronts. The conflict over Iran's nuclear programme continues to escalate, while Ahmadinejad's government cannot count on the population's undivided support on the issue.

One of the demonstrators' chants in Tehran on 4 November was: "A green and free Iran doesn't need nuclear weapons!" That means that many Iranians are now also convinced that the Revolutionary Guard – the actual ruling power in Iran – have done everything to build a bomb as fast as possible.

Supporters of the green movement have promptly dismissed the repeated assurances from the Iranian authorities that they only want to use nuclear energy for peaceful purposes, calling them "another lie". A government that has lied to its own people can lie to the rest of the world as well, they reason. 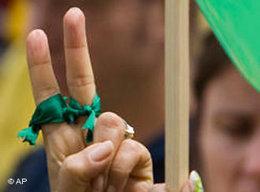 Radicalisation and faction-building: Many activists in the green protest movement are now calling for regime change. Mousavi and Karroubi's reform goals do not go far enough for them

​​ Iran's civilians have shown the world the true face of the Islamic Republic, especially in the past few months. Now it is up to the international community to scrutinise the regime in Tehran so that it does not face unpleasant surprises – including on the nuclear conflict.

The message from the reform-oriented green protest movement on this issue is perfectly clear, in any case. Alluding to the recent negotiations on the Iranian nuclear programme between Iran and the USA, reform-oriented demonstrators in Tehran called for the American president to finally make a decision: "Obama, you're either with them or with us!"

Ghasem Toulany is an Iranian journalist and lecturer in Iranian studies at the universities of Göttingen and Bonn.

Protest Movement in Iran
Fighting the Arrogance of Power
In Iran the talk is no longer simply of election fraud. The issue has long since become the regime's ignorance of the population and its contempt for their intelligence, writes the Iranian cultural journalist Parandis Ahmadi*

END_OF_DOCUMENT_TOKEN_TO_BE_REPLACED
Social media
and networks
Subscribe to our
newsletter