Moreover, as we have already seen in so many other countries, a commitment to neoliberalism is utterly unsuitable as a means for overcoming socio-economic problems like those facing Iran. President Rouhani's economic "reform course" has thus failed to facilitate sustainable and socially responsible economic development. Since he took office, relative poverty and income inequality have in fact risen.

Under Rouhani's presidency, the political system in Iran has often been referred to as practically a "semi-democracy", or a "regulated democracy", etc., a claim that lacks any basis in reality and can be seen more as a self-definition propagated by some of the regime elites.

Analyses of Iran's political system often cite the parallel existence of a republican and a theocratic pillar. According to this view, the republican pillar manifests itself in the direct election of the president and the parliament, whereas the theocratic pillar comprises the other institutions, including the Supreme Leader. The problem with this model is that the republican pillar is actually not one at all, as neither the president nor the members of parliament are really elected in free and democratic elections because all the candidates are first vetted for their loyalty to the regime by the Guardian Council. 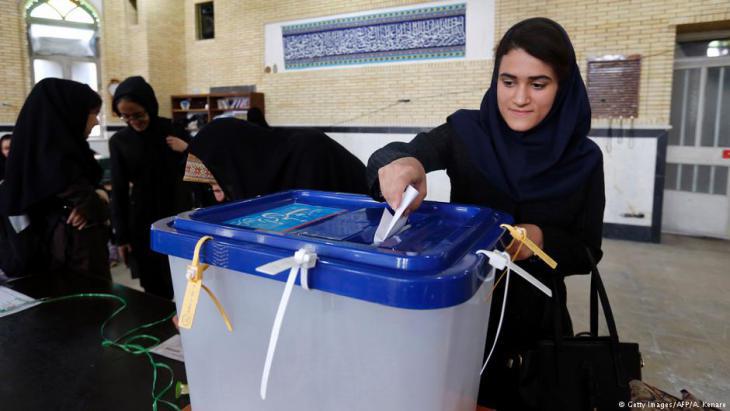 Polls that bring no change – or they would be banned: elections ensure the survival of the Iranian regime in its existing parameters. Despite the Islamic Republicʹs penchant for pseudo-elections, elections alone are no proof of the existence of true democracy. To achieve the latter would require political freedoms, the like of which are not generally evident in Iran

Elections in Iran thus tend to ensure the continuation of the regime within the limits it itself has defined. Nevertheless, the unpredictable results do lead to some policy changes and redistributions of power within the political elite. It would thus be more logical to see the Islamic Republic of Iran as a variant of so-called electoral authoritarianism. And yet, regardless of political practice in Iran, we already know that elections do not per se provide proof of the existence of democracy. Democracy also entails political freedoms that are largely absent in the Islamic Republic.

The hypothesis has also continually been put forth that Iran is the only stable country in the region – unlike other states that have been swept up in the "Arab Spring". This assumption fails to recognise, however, that the country's apparent state of stability, on closer examination, is standing on feet of clay. This was compellingly demonstrated most recently by the uprising at the turn of the year. The fact is that there exists in Iran today, similar to other countries in West Asia and North Africa, a mixture of socio-economic malaise and political immaturity on the part of the majority of the population, offering fertile ground for future uprisings against the regime.

When is it and when is it not acceptable to display a political banner at the World Cup in Qatar? The answer seems to depend largely on the political message, with fans ... END_OF_DOCUMENT_TOKEN_TO_BE_REPLACED

The Kurds are under attack from two sides: from Turkey, and from Iran. The situation in their territories in northern Iraq is becoming increasingly desperate. Birgit Svensson ... END_OF_DOCUMENT_TOKEN_TO_BE_REPLACED

Iranians do not want an Islam that interferes. They are fed up with a system that manipulates people with simple promises of salvation and anti-Western propaganda. Islamic ... END_OF_DOCUMENT_TOKEN_TO_BE_REPLACED

"The Voice of Dust and Ash" draws us into the life and times of Iranian maestro Mohammad Reza Shajarian with passion and joy, focusing on the man who stood, and still stands, for ... END_OF_DOCUMENT_TOKEN_TO_BE_REPLACED

November 2022 sees the Arab world firmly in the spotlight with the COP27 in Egypt and the FIFA World Cup in Qatar. Public trust in MENA governments is weak, thanks to their ... END_OF_DOCUMENT_TOKEN_TO_BE_REPLACED

In Iran, two famous actresses, Hengameh Ghaziani and Katayoun Riahi, were arrested recently. These days anyone who shows solidarity with the protesters is a target to be silenced ... END_OF_DOCUMENT_TOKEN_TO_BE_REPLACED
Author:
Ali Fathollah-Nejad
Date:
Mail:
Send via mail

END_OF_DOCUMENT_TOKEN_TO_BE_REPLACED
Social media
and networks
Subscribe to our
newsletter