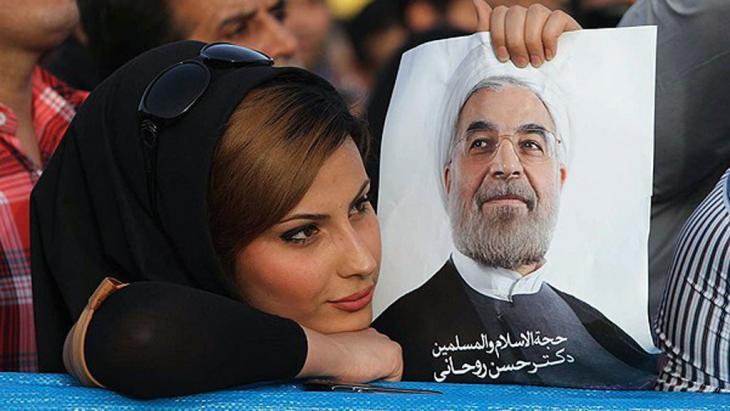 The Kuwaiti analyst Shafeeq Ghabra believes that the real strength of Iran is its society, which is much more emancipated than the regime and more open-minded than the ruling mullahs. Iranian society is not only young, but also more secular than any Arab society

Since the Islamic revolution of 1979, opinion has been divided in the Arab world concerning Iran. At first, there was great fear that the Iranian revolution might spread to the Arab countries, which led, among other things, to the devastating war between Iran and Iraq, in turn driving Saddam Hussein's dictatorship into financial and political ruin.

Saddam tried to make up for his losses with his risky occupation of Kuwait. This brought Iraq its first American invasion in 1991, along with a strict regime of sanctions, ultimately culminating in the 2003 US invasion. In short, ever since 1979, the Arab world has been responding directly and indirectly in a variety of ways to Iranian policies.

Meanwhile, mismanagement along with political failure, improvisation and tyranny have spread through many Arab countries, with human rights and justice being trampled underfoot. Iran, like other nations, saw an opportunity to fill this vacuum. This was the prelude to a conflict that later took on religious overtones – with Shia Iran on one side and the Sunni Arabs on the other – but which remained at its core political.

The recently signed nuclear treaty is now stirring up yet another conflict among the states lining the Persian Gulf that is likewise coloured by religion. But Iran cannot be reduced only to its regime or even to a group within that regime, not to the revolutionary leaders, nuclear weapons or military interventions.

It is striking how there is not a single research centre for Iranian studies in the entire Arab world that attempts to gather knowledge about Iran in all its complexity. Accordingly, there is no exchange with Iranian researchers either, whether those in Iran or those living in exile.

Lack of interest in Iranian politics

Harvard University has now launched a comprehensive programme called the "Iran Project", headed by the young Iranian scholar Payam Mohseni. But, despite all the turmoil in the Arab countries and the many wars that have something to do with Iran, apparently no one can be found there who would be interested in delving into depth into the politics and future of Iran.

People's views on Iran are varied and rife with contradictions. Is Iran a rising nation with growing influence and power? Or is the country taking a backward course and displaying signs of weakness? 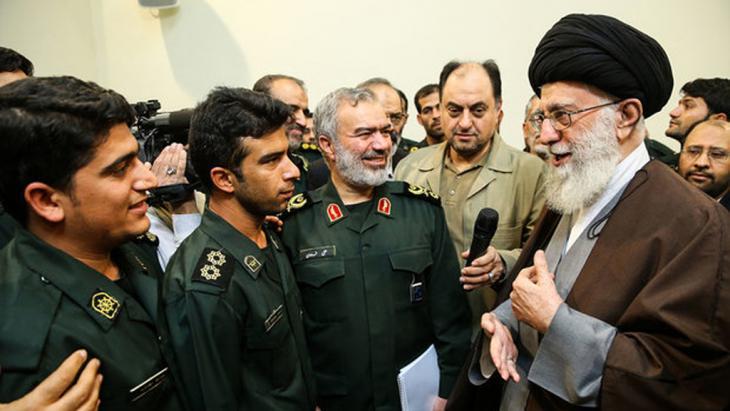 Divide and rule: the Supreme Leader Ayatollah Khamenei is at the centre of it all, trying to balance the differing interests, but most of his decisions nevertheless betray his close ties to the Revolutionary Guards and the security authorities

Anyone who studies the country carefully will find that neither of these assumptions holds true. In some respects, the country resembles the former Soviet Union: on the one hand, it is investing excessively in arms and the Revolutionary Guard and putting stock in over-reaching ideologies while paying little heed to its development requirements.

On the other hand, the Iranian regime must be given credit for being highly institutionalised, with the various institutions often providing checks and balances. The Supreme Leader Ayatollah Khamenei is at the centre of it all, trying to balance the differing interests, but most of his decisions nevertheless betray his close ties to the Revolutionary Guard and the security authorities. In any case, the Iranian regime is more complex than the Arab ones, which are geared more to certain individuals than to institutions.

Many might insinuate that, without the economic pressure and the rampant inflation the country is suffering from, Iran would not have signed the nuclear treaty. But the treaty is without doubt a beneficial step for the country, because Iran has been able to use it as a tool for negotiating other fundamental improvements.

Challenges remain after the nuclear negotiations

What's more, the nuclear deal itself is not the end of the story, even for Iran. It in fact gives the Islamic Republic a major boost and optimism prevails on the streets of Tehran that the West will now suddenly be willing to invest in the country again. Iran would need over 130 billion US dollars in investments in the short term to achieve three percent economic growth. The Iranian government can only foot 25 billion of this amount, so the rest must come from outside.

Furthermore, the country needs 300 new planes for its national air fleet and overhauling outdated oil refineries or building new ones would cost 100 billion dollars. In contrast, Iran has spent seven billion dollars on wars in the Arab world over the past two years.

The lifting of sanctions will help Iran on many levels. In particular, the country can now find its way back onto the international political stage and the Iranian banks can resume international trade, which will bring in investment in the oil and gas sector as well as other industries. 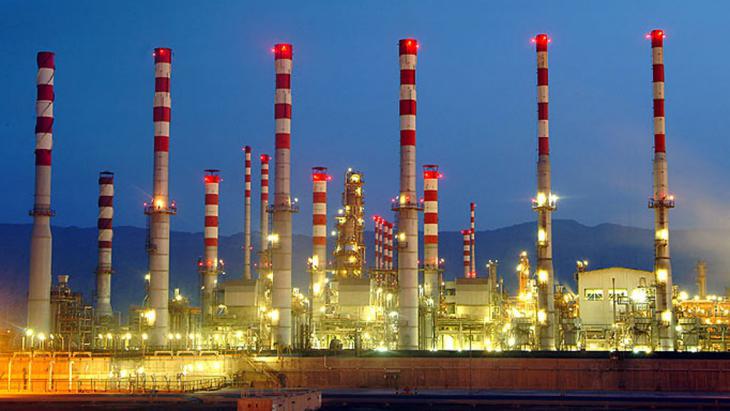 Signs of an economic upturn: following the lifting of sanctions, the country can now find its way back onto the international political stage. The Iranian banks can resume international trade, which will bring in investment in the oil and gas sector as well as other industries

But a complete economic opening will not be quite as easy for the country as some experts believe. The main reason is Iran's distrust of the USA. For many Iranians, the legitimacy of the regime is based on the fact that their country is in a position of confrontation in the Middle East with America and Israel. A departure from this policy, which has been embraced for more than three decades, is not conceivable in the short term.

Despite all of the above, Iran is a pragmatic power that wants above all to survive and which has proven agile whenever it feels threatened. That's why the regime signs agreements in moments of danger. But despite the nuclear agreement with the USA, there are plenty of other fraught issues with Washington.

It is therefore not to be expected, no matter what some people in the Gulf region believe, that Iran will fall into the USA's lap. Not merely because the regime can safeguard its legitimacy only by opposing the USA in the Middle East, but because American policy does in fact give Tehran cause for concern in many respects.

In addition, there are structural barriers that make it difficult for money to flow into the country quickly. After all, 40 percent of the Iranian economy lies in the hands of military and religious institutions as well as the security authorities. These institutions are not under the regime's control and are tax exempt. Some of them, or some of the people working there, are still subject to international sanctions that remain in force despite the nuclear deal. Chinese-style privatisation will therefore come up against certain limits, putting a damper on the optimism on the street. This in turn weakens the regime.

All of these considerations are leading the Iranian regime to proceed with caution and concern in the face of long-term American and Israeli efforts to bring about regime change in Tehran. There are thus conflicts and harmony, disputes and common interests, moreover the USA could very well impose new sanctions some day because of the role Iran is playing in the region.

More secular than any Arab society 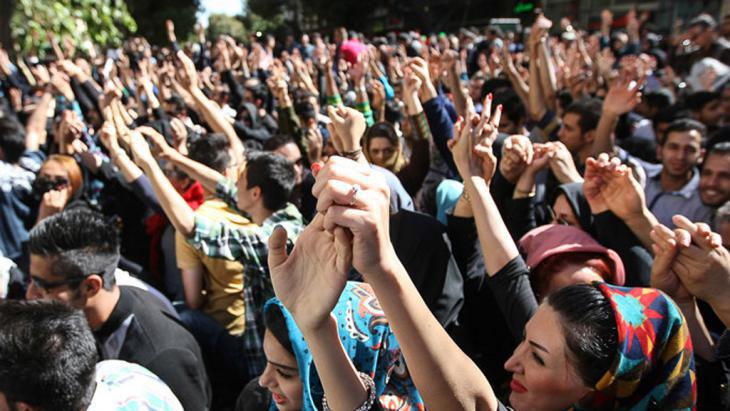 Iran is stuck in an open-ended contradiction between religious ideology, a ponderous bureaucracy, a difficult economic situation and underdevelopment versus a public that wants change

The real strength of Iran in both the medium and long term, however, lies in its society, which is much more emancipated than the regime and more open-minded than the ruling mullahs. Iran is an ancient civilisation, but Iranian society is today not only young but also more secular than any Arab society. People believe in reforms and gradual change and they want a more transparent and less ideological state. Iran is therefore poised at an oddly contradictory juncture between religious ideology coupled with a ponderous bureaucracy, a difficult economic situation and limited development, versus a pragmatic, emancipated public that wants more openness.

Iran is ready for far-reaching reforms, but not for a new revolution like the one in 1979. If we study remarks made by many sons and daughters of the revolutionaries of yesteryear, right down to the grandchildren of Imam Khomeini, we will find that most of them are reformists and do not place much stock any longer in the revolutionary security state.

The regime thus handles the two former presidents, Khatami and Rafsanjani, with kid gloves. The latter has been heavily restricted in the role he plays in Iran and Khatami is not allowed to leave the country. Indeed the Iranian press is forbidden from publishing his remarks.

The USA will continue to take an interest in change in Tehran, even if such sentiments will be expressed less often than before, now that policymakers accept that change will be gradual. On the other hand, Iran's Supreme Leader will not be able to impose on his country a strategy of privatisation and commercialisation based on the Chinese model. The Revolutionary Guard and other government agencies that dominate the economy are too strong for that.

The pace of reform in Iran will however also depend on the will of the people, who want a modern state and more civil rights without having to abandon their Islamic faith. And it will depend on the strength of the person who will someday replace Khamenei.

In the short term, Iran will therefore witness some progress, but any advance is already likely to be hindered in the medium term. The future of the country depends on which direction its people choose to take.

When is it and when is it not acceptable to display a political banner at the World Cup in Qatar? The answer seems to depend largely on the political message, with fans ... END_OF_DOCUMENT_TOKEN_TO_BE_REPLACED

The Kurds are under attack from two sides: from Turkey, and from Iran. The situation in their territories in northern Iraq is becoming increasingly desperate. Birgit Svensson ... END_OF_DOCUMENT_TOKEN_TO_BE_REPLACED

Iranians do not want an Islam that interferes. They are fed up with a system that manipulates people with simple promises of salvation and anti-Western propaganda. Islamic ... END_OF_DOCUMENT_TOKEN_TO_BE_REPLACED

"The Voice of Dust and Ash" draws us into the life and times of Iranian maestro Mohammad Reza Shajarian with passion and joy, focusing on the man who stood, and still stands, for ... END_OF_DOCUMENT_TOKEN_TO_BE_REPLACED

November 2022 sees the Arab world firmly in the spotlight with the COP27 in Egypt and the FIFA World Cup in Qatar. Public trust in MENA governments is weak, thanks to their ... END_OF_DOCUMENT_TOKEN_TO_BE_REPLACED

In Iran, two famous actresses, Hengameh Ghaziani and Katayoun Riahi, were arrested recently. These days anyone who shows solidarity with the protesters is a target to be silenced ... END_OF_DOCUMENT_TOKEN_TO_BE_REPLACED
Author:
Shafeeq Ghabra
Date:
Mail:
Send via mail

END_OF_DOCUMENT_TOKEN_TO_BE_REPLACED
Social media
and networks
Subscribe to our
newsletter