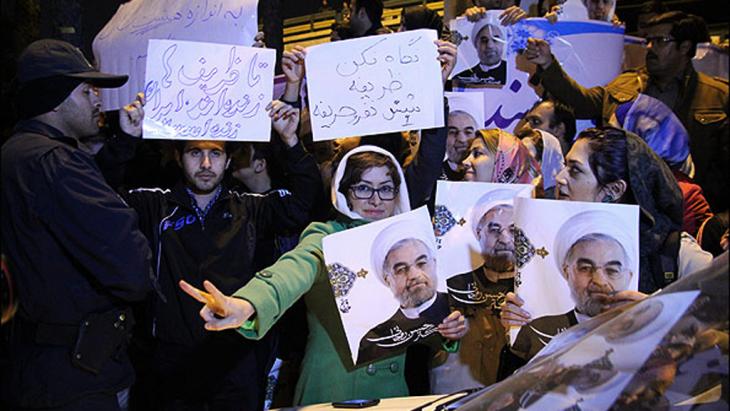 Iran's Intellectuals and President Rouhani
When Freedom Becomes A Possibility

Ever since Hassan Rouhani assumed the office of Iranian president, optimism has been growing among Tehran's intellectuals. Nevertheless, no one is taking any chances; past experience has shown that this would be unwise. Marina Forti reports from the Iranian capital

Things are changing in Iran. In the four months since he took office, President Hassan Rouhani has changed the atmosphere. "We now have hope," says film producer and screenplay writer Fereshteh Taerpour. Together with her colleagues, Taerpour is working hard to get the "House of Cinema", which was officially re-opened on 12 September, up and running. It was closed for almost two years on the orders of the government of ex-President Mahmoud Ahmadinejad. "I am 100 per cent optimistic," says Taerpour. "But we also have some very dark years behind us."

We are sitting together in a cosy office in her home. With its sofas and tables full of books and knick-knacks, the office is more like a living room than anything else. The turn-of-the-century buildings in her district make a refreshing change from the steel and glass monster that Tehran has become in the course of rampant housing speculation.

Fereshteh Taerpour's hope relates to the film industry. But the atmosphere among political scientists, journalists and economists is similarly optimistic. People speak of Rouhani as Iran's "last chance": its last chance to escape from isolation, its last chance to revive the economy and its last chance to breathe new life into a society that seems on the brink of death by suffocation. In international relations, the changes are obvious: the Geneva Agreement between Iran and the P5+1 group of nations (the permanent members of the UN Security Council plus Germany), which will see Iran curbing its nuclear programme considerably in return for a loosening of sanctions, can at least be interpreted as a thawing of relations. 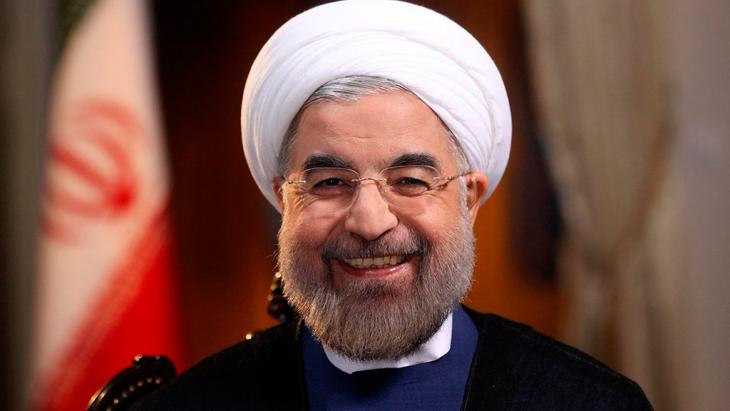 High hopes and great expectations: Iran's intellectuals feel that their new president carries the hopes of the nation and is its last chance to break out of isolation, to revive the crippled economy, and to liberalise society step by step

The thaw at the end of a long winter

What is more important are the changes that are currently taking place within the country itself. Many members of the opposition who were arrested after the protests following the 2009 elections have been released. Well-known dissidents have been able to publish in newspapers again. But caution is of the essence, warns one member of the opposition: "We have replaced the government, not the system."

Above all else, the economy will be the new government's biggest concern. If there is one thing on which conservatives and reformers agree, it is that if Rouhani fails on the economy, he will fail in everything. Within the course of a year, the national currency (the rial) has lost half of its value. Although the rate of inflation, which had hit 42 per cent, fell to 30 per cent in November on the back of the general optimism sweeping the country, it still hits lower-income households the hardest.

Unemployment is at over 20 per cent; the nation's coffers are empty; the sanctions in the banking sector in particular are a huge burden on trade. Nevertheless, business is going well, at least in Tehran. However, the only section of society that can afford to buy anything is a small elite, whose close connections with the powers that be have really come into their own since sanctions were imposed.

For example, the influence of the revolutionary guard has increased. From the engineering sector to the petrochemical industry, this paramilitary organisation has accumulated considerable economic assets. The West thought that sanctions would force the regime to its knees; the reality is that its most radical wing has profited from them. 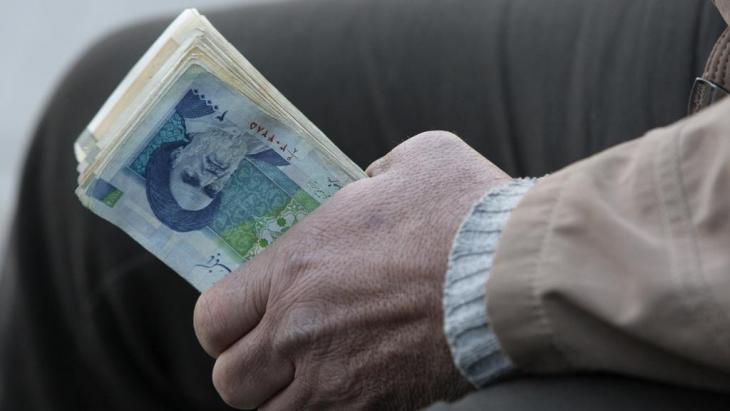 Crippling sanctions: according to a report published by the Central Bank, inflation in Iran has passed the 40-per cent mark. The economy is nose-diving. Only a small group of people close to the revolutionary guards and the country's political leaders are benefitting from the sanctions; everyone else is growing poorer and poorer

Society as a whole, however, is impoverished. "Social inequality is much worse today than it was on the eve of the Islamic Revolution," says sociologist Masserat Amir-Ebrahimi, whom I meet in the elegant café in the film museum.

It is a long way from the southern part of town, but the underground has cut travel time immensely. Every morning, it brings tens of thousands of people from the poor districts and the satellite towns that are springing up around the capital to the offices and businesses in the centre and the north.

Between the morning and evening rush hours, the underground becomes a huge market place. Stockings and underwear, hair bands, nail polish and all kinds of snacks are on offer in the carriages reserved for women. "Many of the people who work there have a university degree. But no one can live on a job in the public sector," says Amir-Ebrahimi.

Will Rouhani succeed in convincing a nation of 75 million people – where 65 per cent are under 35 – that the economic situation will improve? No one can tell at present. In the cultural sector, at least, Rouhani has been shaking things up. He has appointed a pragmatic person as head of the Ministry for Culture and Islamic Leadership.

At first glance, it might have seemed as if Ali Jannati was cut from a completely different kind of cloth. His father, Ayatollah Ahmad Jannati, has been chairman of the Guardian Council of the Islamic Republic for 21 years. Only recently, Jannati Senior said that opposition leaders Mir Hossein Mousavi and Mehdi Karroubi should really be hanged. Ali Jannati adopted a different stance at a press conference: "You don't inherit ideas. I did not get my convictions from my father's DNA."

Bahman Farmanara, an internationally renowned director, screenplay writer, and producer, agrees that "Rouhani is our last hope." I meet Farmanara in the office of the textiles factory he took over from his father, a grey building in the centre of Tehran. Maybe it is this professional dual identity – the grand old man of Iranian cinema and entrepreneur in one – that makes Farmanara see things with such pragmatism.

"Rouhani has given the key positions in the cultural sector to the right people, to people who have at least seen something of the world. We can work again, and we have so much young talent." He too intends to start filming again soon. "They haven't allowed me to do anything in four years!"

But Farmanara also sounds a word of warning: "Our opponents have not gone away. They control state television, many newspapers, and they are sitting on the money." The closure of the reformist newspaper Bahar shows just how risky the situation still is: it was banned in October by the public prosecutors because of an article that was deemed "provocative".

Not crossing the red lines

"Today, we are more realistic about those in power and the determination of the radicals within the system," says Amir-Ebrahimi. "In the days of President Khatami, we had great expectations. But then came Ahmadinejad, and all freedom was suffocated. We now know how fast any room to manoeuvre can disappear. We have to be quick. And flexible."

She cites social media as an example. From young people to dissidents and conservative leaders alike, Iranians love social media. The Facebook page of Foreign Minister Mohammad Javad Zarif has over 750,000 likes. "We use Facebook, but everyone still keeps within the red lines. You have to read between the lines a lot," says Amir-Ebrahimi. "Yet despite this culture of insinuation, Facebook is the first public place in Iran where women have taken off their veils. Some wear a headscarf, of course, but others don't. It has become a personal decision!"

Iranian society is undergoing radical change: the birth rate is sinking, one in three marriages ends in divorce, and fewer women are getting married. The young generation has a new awareness of its own rights. "Religion," says Amir-Ebrahimi, "will soon be a private matter, independent of the state system." Wouldn't that be a pretty paradox for a country that calls itself the Islamic Republic?

For many years, Marina Forti was head of the international section of the Italian daily newspaper Il Manifesto. As its Asia correspondent, she has spent many years in Iran, India, and South-East Asia.

Days of protests across Iran followed the collapse of a high-rise building in the city of Abadan in May 2022. But why has the disaster become such a political issue? Rahman ... END_OF_DOCUMENT_TOKEN_TO_BE_REPLACED

Millions in Idlib depend on aid coming through a northern border crossing. On 10 July, the UN Security Council votes whether to keep it open. The decision may hinge not only on ... END_OF_DOCUMENT_TOKEN_TO_BE_REPLACED

Mourad al-Marouai was just nine when a landmine killed him on a beach in war-torn Yemen, a tragedy that will haunt his family forever. After a swim, the little boy "suddenly ... END_OF_DOCUMENT_TOKEN_TO_BE_REPLACED

This year’s Morgenland Festival opened with the premiere of Kinan Azmeh’s musical theatre piece, “Songs for Days to Come”, based on fifteen poems by contemporary Syrian poets. ... END_OF_DOCUMENT_TOKEN_TO_BE_REPLACED

Rumi's poems, though generally stripped of their Islamic symbolism, are hugely popular around the world. Yet Islamic mysticism is still very much at the heart of these verses. ... END_OF_DOCUMENT_TOKEN_TO_BE_REPLACED

END_OF_DOCUMENT_TOKEN_TO_BE_REPLACED
Social media
and networks
Subscribe to our
newsletter